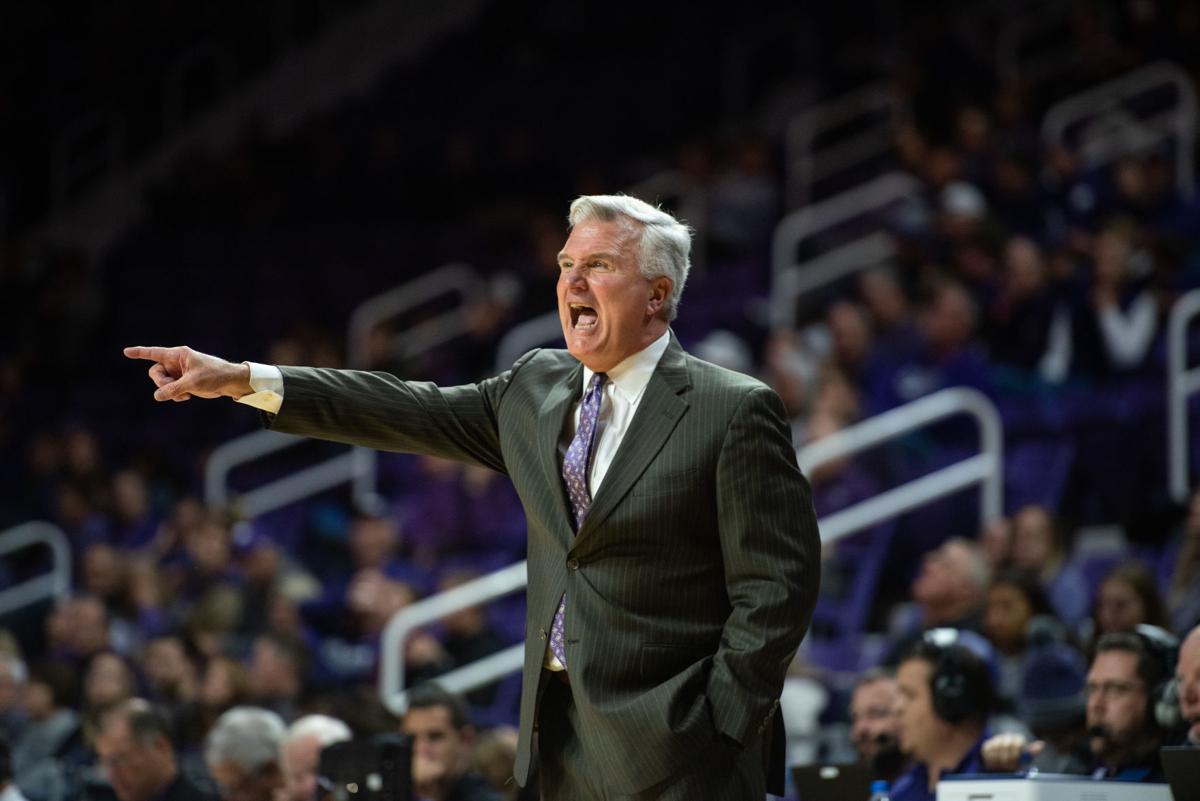 K-State’s head coach Bruce Weber talks to his team while they are on defense in the second half. 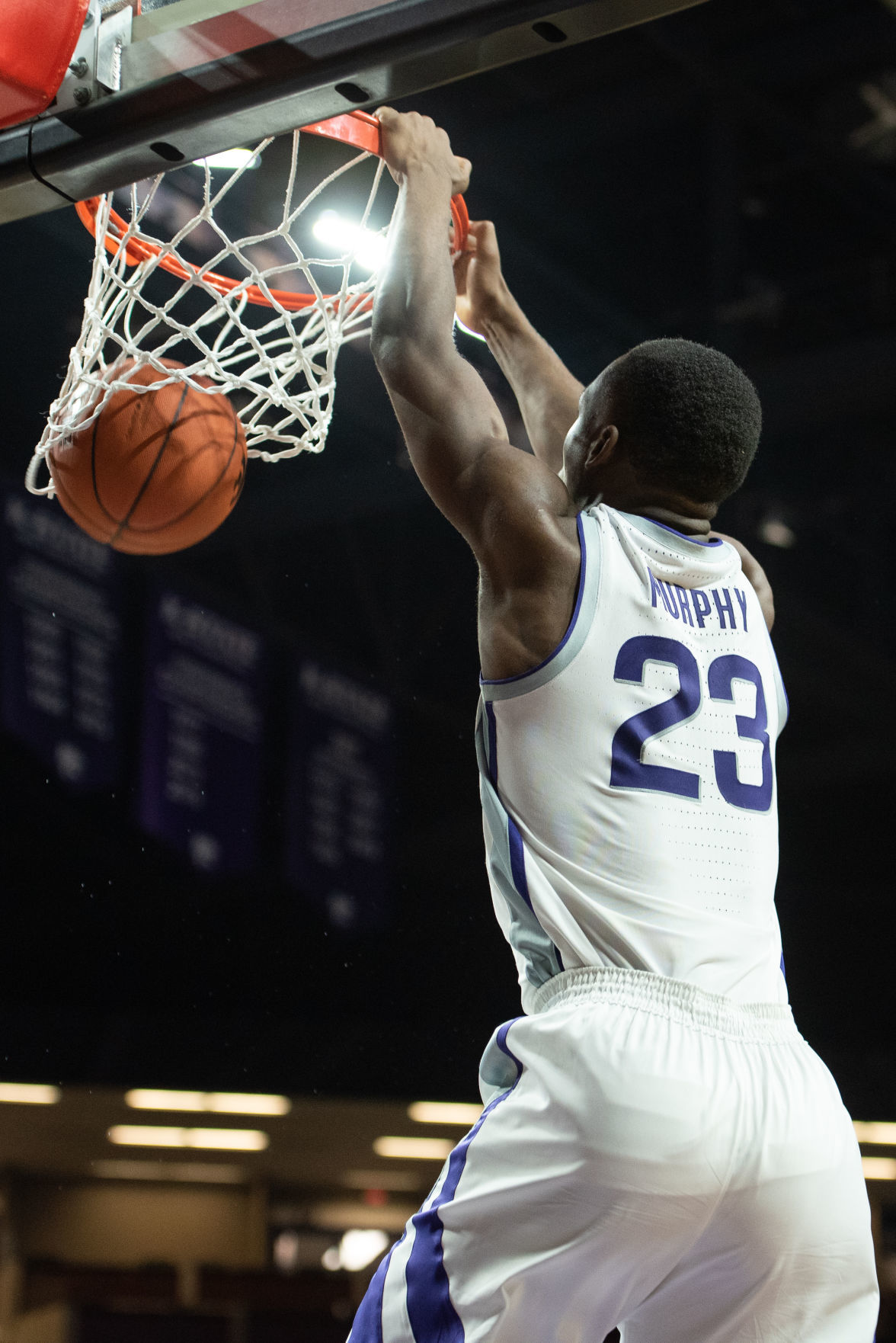 Montavious Murphy (23) dunks the ball after K-State steals the ball on defense.

K-State’s head coach Bruce Weber talks to his team while they are on defense in the second half.

Montavious Murphy (23) dunks the ball after K-State steals the ball on defense.

If it seems early, that’s because it is, but patterns already have begun to develop across Kansas State’s spotless start to this season.

One will encourage those on the Wildcats’ side. The other might not, depending on how much you care about nuance.

K-State used a 73-54 home win over Monmouth Wednesday night to move to 3-0 this season. The Wildcats are still adjusting to a new roster, which includes four newcomers seeing immediate playing time, and so a perfect record reflects positively on the players and coaches.

But the details reveal a couple early trends.

The first: K-State has gotten off to a rotten start from beyond the arc.

The second: The Wildcats have sleepwalked through first halves, only to awake in the second and come roaring back.

“Second half, much better flow,” K-State coach Bruce Weber said after Wednesday’s win. “You get 14 assists in the second half. Some of that, you’re making shots, but some of it, you’re moving the ball. And we stepped up and made some shots.”

Entering Wednesday, K-State ranked No. 328 out of 348 teams nationally in 3-point field goal percentage, shooting just 22.7% from distance this season. The Wildcats had hit just 10 of their 44 attempts, which includes a 4-for-23 outing in their win over UNLV on Saturday.

Over its first two games, K-State shot 1-for-32 from beyond the arc in the first half.

On Wednesday night, K-State connected on 4 of 19 triples. No Wildcat hit more than one. David Sloan, Xavier Sneed and Montavious Murphy each splashed one 3-pointer, plus a Pierson McAtee trey in garbage time.

That won’t come entirely as a surprise, in large part because K-State always figured to regress in the scoring department this season. Their best scorers last season, seniors Barry Brown, Dean Wade and Kamau Stokes, have all moved on. And that was a team that ranked last in the Big 12 in scoring offense.

Yet the Wildcats expected to plug those holes to different degrees — namely with Cartier Diarra, Mike McGuirl and Sneed — haven’t always shot particularly well, even when the offense has hummed along.

“I think they were open looks,” Murphy said, “they just didn’t go in. I think it’s just when we spot up, we’ve just got to make the shot. It takes getting in the gym and trying to hit them.”

For Weber’s part, he agreed with Murphy. Some 3s were forced, but some were wide open — the Wildcats just missed.

“I told them at halftime,” Weber said. “‘What are teams doing to us? They’re just sitting in the lane, waiting.’ A couple times, we had drop-downs. They had three guys around Levi (Stockard), loses the ball. Mak (Mawien) got it taken a couple times where we drove and there’s a bunch of people there.”

In other words, Weber said, teams are daring the Wildcats to shoot. They’re winning those bets.

Which brings us to the second trend that’s begun to develop for the Wildcats: Forgettable first halves that have given way to sterling second halves.

Against UNLV, K-State shot just 28 percent in the first half, including a 0-for-10 mark from beyond the arc. The Wildcats managed just 16 points.

In the second half, those numbers were 46 percent from the field and 3-for-11 from downtown. The Wildcats finished off the Runnin’ Rebels in overtime.

Finally, on Wednesday night, K-State’s first-half shooting numbers, 29% from the field, and 0-for-10 on 3-pointers, paled in comparison to its second-half figures. The Wildcats shot 64% overall, including a 4-for-9 outing on long balls. In sum, K-State has been outscored 74-57 in the first half. In the second half, the Wildcats have outscored opponents 131-82.

“At halftime, before the coaches come in,” backup point guard David Sloan said, “we talk and the guys on the bench see what the guys on the court are not doing. We just communicate, and they got in there the first five minutes and adjust. Then, we come off the bench and try to just pick up where they’ve left off.”

If there’s a silver lining in all of this for K-State, just look at the calendar. It’s November. The Wildcats have ample time to fix their issues, even if it means doing so in small increments. With a revamped roster at hand, that may be the solution.

It may start in the gym. Or even in the players’ heads.