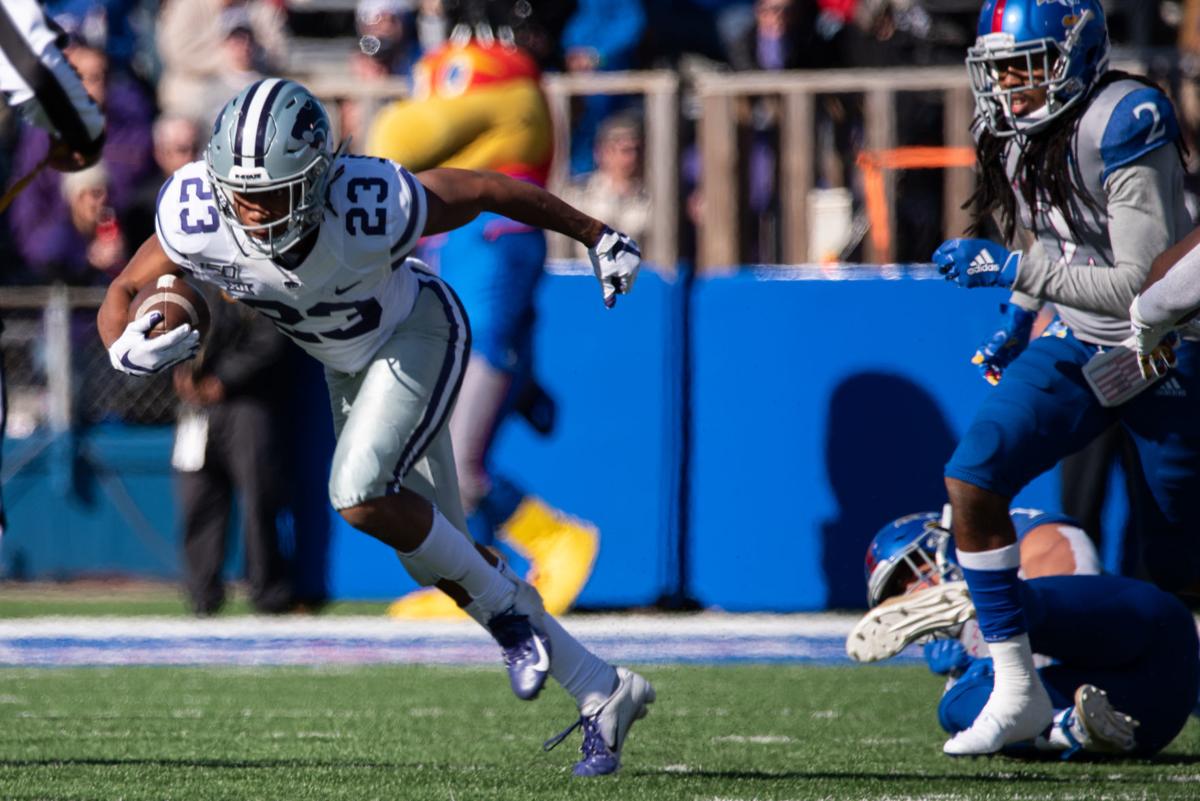 Kansas State receiver Joshua Youngblood (23) catches a punt and runs up field during the game against Kansas in Lawrence on Nov. 2. A true freshman from Tampa, Florida, Youngblood has continued to take on a larger role on both offense and special teams for the Wildcats as the season has progressed. 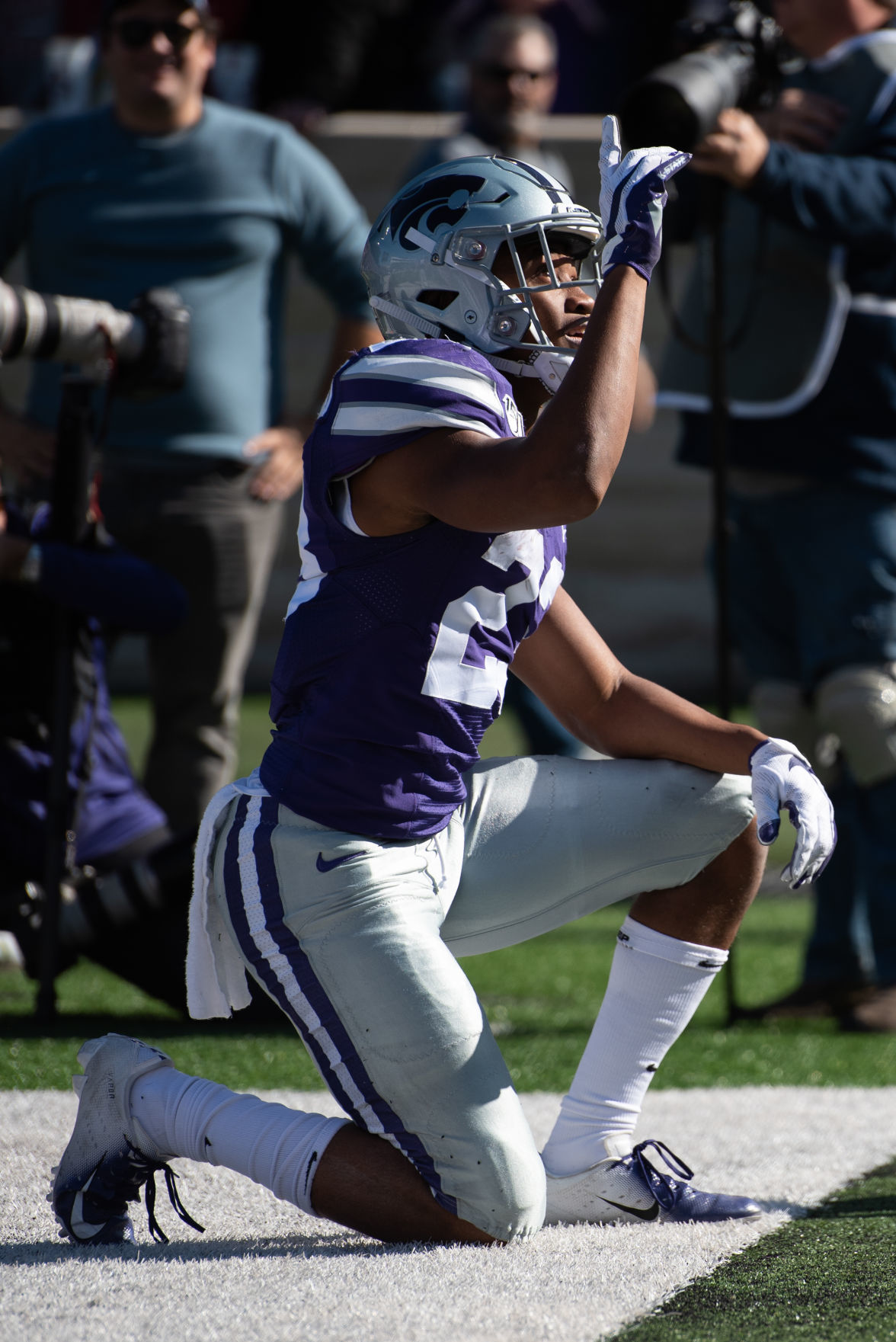 Kansas State receiver Joshua Youngblood (23) catches a punt and runs up field during the game against Kansas in Lawrence on Nov. 2. A true freshman from Tampa, Florida, Youngblood has continued to take on a larger role on both offense and special teams for the Wildcats as the season has progressed.

Nothing seemed amiss to Joshua Youngblood when he woke up Tuesday morning. The sun was in the sky. He still was Kansas State’s precocious freshman wide receiver. He still was enjoying one of the best freshman seasons in recent program history.

Then he stepped outside.

“I don’t know about all that,” Youngblood said with a laugh.

Quite the change in scenery from Youngblood’s days in Tampa, Florida, where he established himself as a speedy utility athlete in temperatures that seldom dropped below 40 degrees.

It’s a funny anecdote, but it’s also a microcosm of the way Youngblood is adjusting to a whole lot of new things. He’s playing a new position, for one — he played quarterback and defensive back his senior year at Berkeley Prep — and he’s roughly 1,400 miles from home in Tampa, where his mother, brother and sister live.

New coaching staff, too, even though first-year K-State head coach Chris Klieman made Youngblood a scholarship offer in early 2018, when Klieman was the head man at North Dakota State.

Consider that Manhattan is about six times smaller than Tampa — which means Youngblood no longer has access to his favorite restaurant, a local favorite called Konan’s BBQ — and you begin to understand just how big a change this is for Youngblood.

The key, though, is this: Youngblood is adapting quickly, and he’s doing so well. The Wildcats are 6-3 this year, and Youngblood has recorded one touchdown on the ground and another on a kickoff return.

If you know anything about K-State football, you know that’s rare. That Klieman is open to playing true freshmen represents a 180-degree pivot from the policy of his predecessor, legend Bill Snyder, who almost unilaterally avoided doing so.

Still, even though part of the reason Youngblood chose K-State was because Klieman left the door open for potential playing time, Youngblood has been taken by surprise.

He didn’t think he would ascend this quickly.

“I knew that I was going to have a chance to play, because I worked hard for it,” Youngblood said, peering through the short, orange-tinged dreadlocks hanging on his face. “I didn’t know it would be like this. This has been crazy to me. Everybody in Manhattan is so nice. It’s a great environment. I love it here.”

To varying degrees, his teammates and coaches all seem to agree on their description of Youngblood. He’s energetic. Fun guy. Hard worker, too.

The other part of Youngblood’s unusually fast come-up has to do with his preparation.

Redshirt freshman Malik Knowles, who called Youngblood his “little brother” because of all the time they spend together, said the two worked out on Youngblood’s first day on campus. Offensive coordinator Courtney Messingham, a member of the North Dakota staff that offered Youngblood early last year, said the wideout made an effort to study the playbook in his first few days on the team.

Even senior tight end Blaise Gammon said Youngblood has “done a great job really trying to learn the system quick and be engaged.”

“The biggest thing really with Josh is when he gets his opportunity, he plays 100 miles an hour,” Messingham said. “Not just the return he took back for a touchdown, but in general when you see him, if it’s handing him a ball when he scored on the touchdown run, he plays as fast as he can play.

“He plays — ‘free’ is maybe not the right term — but he doesn’t have a lot of cares in the world. He’s worrying about trying to make something happen. I love that about him.”

You see it when Youngblood takes the field. He’s not particularly tall, only 5-foot-10, but he makes a living off his athleticism. That’s been abundantly clear on several occasions this season, but none more than the two touchdowns he’s scored this year.

The most recent came last Saturday, in the fourth quarter of K-State’s eventual 27-24 road loss to Texas. Youngblood caught a kickoff, made the first guy miss and sprinted 98 yards into the end zone, avoiding nearly all contact and pumping new life into the Wildcats’ chances.

Suddenly, K-State was within three.

“I didn’t really know the magnitude of that play until after the game,” Youngblood said. “It gave us another shot to win. I’m just happy that I could make a play. Just try to help the team win.”

Youngblood’s other touchdown, his first, came early in the second quarter of K-State’s 48-41 win over then-No.5 Oklahoma on Oct. 26. The Wildcats were at the Sooners’ 4-yard line, and K-State quarterback Skylar Thompson lined up in the shotgun. He motioned Youngblood in motion.

Youngblood came sprinting across the formation, took the handoff and darted his way toward the end zone, angling away from defenders until he slid into six points.

Then, when Youngblood jogged to the back of the end zone and held two arms in the air, the world got a glimpse into part of the 18-year-old’s past.

Only upon close inspection.

Youngblood’s celebration revealed the underside of his right bicep, where a small tattoo sits. It’s a date — “5-31-16” — which represents the day his grandfather, Theodis Lane, passed away. The tattoo also includes a small cross next to the date.

Youngblood lived with Lane during his middle school days and part of his high school years. The tattoo, then, is a way for Youngblood to think about his grandfather and the lessons he passed on.

“He taught me how to be a man,” Youngblood said. “He taught me how to do things the right way. He helped my faith in God. He was a pastor, so he helped my faith. Just helped me understand how to be a man and do things on a daily basis — ‘You’ve got to do this to be successful, stay out of trouble,’ stuff like that. He was a great motivator to me.”

Youngblood’s biggest motivation, though, lives in Tampa: His mother, Casandra.

She often worked overtime hours, Youngblood said, “to make ends meet.” She also has two other children, Mila and Caleb, both younger than Joshua.

Family, Youngblood says, provides all the drive he needs.

That he first felt it at age 8 says something about Youngblood’s priorities.

He’s well on his way.

This time last year, Youngblood will tell you, he was hardly getting recruited by Power 5 programs. He had offers from several schools — Marshall, Appalachian State, Georgia Southern, Buffalo, East Carolina, Wofford and UMass included, and he even made a pledge to Temple before decommitting seven months later — but it wasn’t until his senior year ended, in late 2018, that things “really got crazy, got hectic,” he said.

But when K-State named Klieman the man in December and Youngblood made his official visit a month later, he made his mind up.

He was a Wildcat.

“I just fell in love with it here, you know?” Youngblood said. “I’m glad that they offered me, took a chance on me. I’m not a big kid. Small kid from Tampa, Florida. I’m just happy that they gave me the chance.”

Youngblood is right. He’s not big, not by Division-I football standards.

But ask those closest to him and you learn that’s part of his makeup. It’s a feature, not a bug, in other words.

Oh, and two-year letterwinner in basketball.

Some numbers: Youngblood rushed for 2,221 yards and 26 touchdowns across his junior and senior seasons. He returned 16 kickoffs during his career, good for a 19.1-yard average. His senior year, he led Berkeley to the regional final of the state playoffs.

That’s part of why ESPN named him the 75th-best athlete in the Class of 2019.

All that shone through, height — or lack thereof — be damned.

“Some people are looking for the perfect guy, the 6-4, 6-5 guy, but he was always a playmaker,” Ciao said. “Kansas State’s staff saw that, and they weren’t concerned about anything about him. So that was the difference.”

Now, Youngblood is reaping the rewards. He’s traded his old hobbies, like rollerskating and stopping by Culver’s in Tampa — double cheddar burger with bacon and a large strawberry shake, by the way — for touchdowns in Manhattan.

He still has goals, of course, namely the NFL. Wants to give back to his family. Longs to make sure his mom, brother and sister are good. But, Youngblood says, it’s “a long-term goal. If I focus on that, I’ll get lost in what I’m doing now.”

If the humility and perspective his teammates notice is any indication, those sorts of things seem well within reach.

No matter the temperature outside.

During a meeting with reporters Tuesday, Joshua Youngblood began discussing speed. His, specifically. Even more specifically: the agility and …

Join Us at KS
Student Services