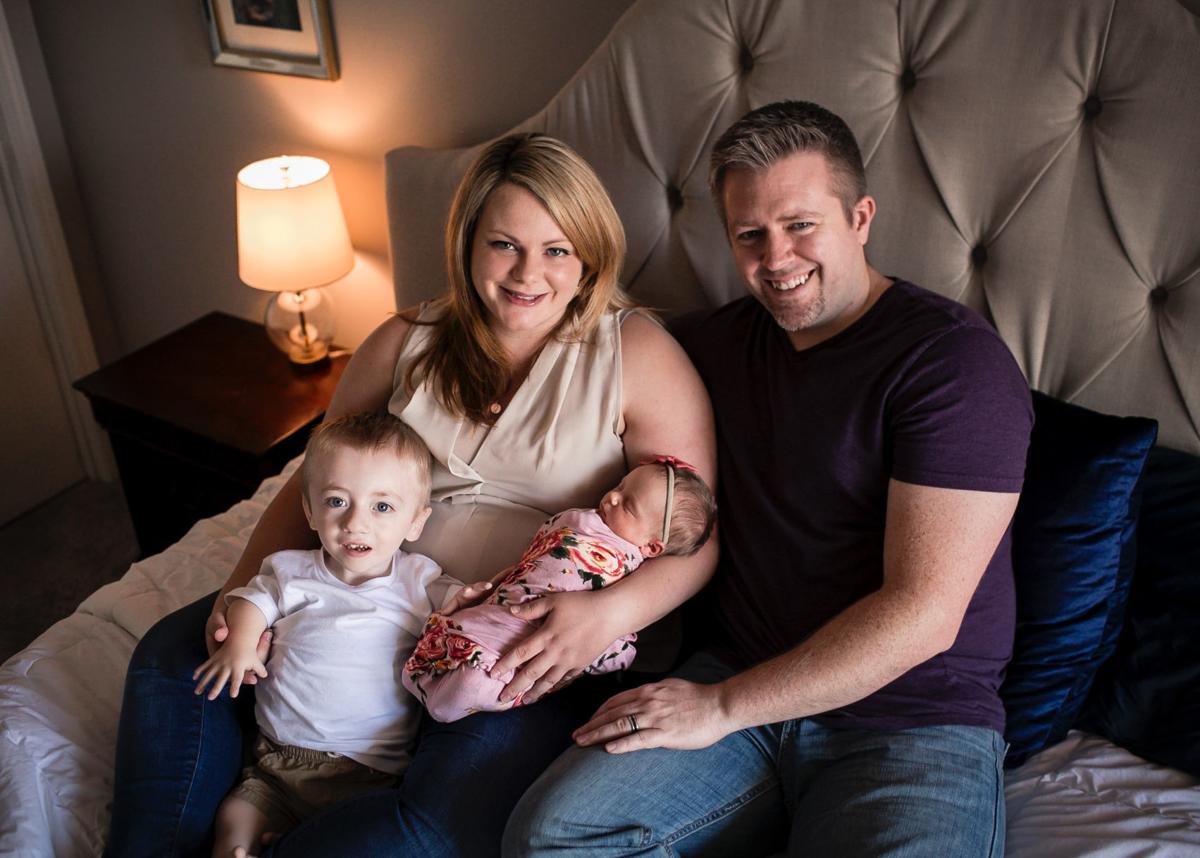 The Stanley family — Mike and Marcella, with their children, 4-year-old Brody and 4-month-old Holly — backs Kansas State. Both Mike and Marcella graduated from the university. Brody has a rare form of dwarfism, which affects only 1 in every 500,000 newborns. But his fight has made him a source of inspiration for the K-State football program and fans who have rallied to support the family. 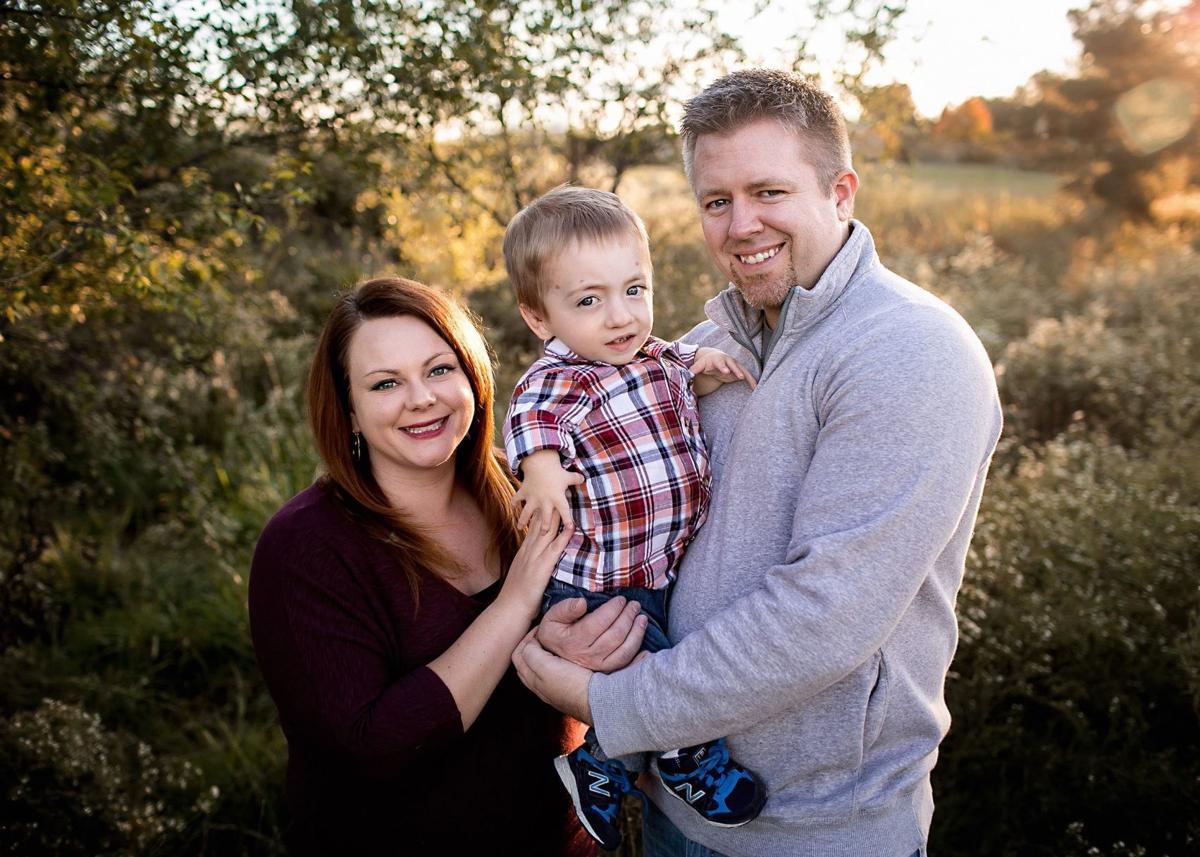 Brody Stanley has a rare form of dwarfism, known as diastrophic dyplasia. It affects only 1 in every 500,000 babies. Kansas State’s football players, coaches and fans have rallied around Brody. An Instagram account Mike set up to document Brody’s experience has more than 37,000 followers. K-State head football coach Chris Klieman recently mailed the Stanleys a letter, while starting quarterback Skylar Thompson shared encouraging messages with Mike on Twitter.

The Stanley family — Mike and Marcella, with their children, 4-year-old Brody and 4-month-old Holly — backs Kansas State. Both Mike and Marcella graduated from the university. Brody has a rare form of dwarfism, which affects only 1 in every 500,000 newborns. But his fight has made him a source of inspiration for the K-State football program and fans who have rallied to support the family.

Brody Stanley has a rare form of dwarfism, known as diastrophic dyplasia. It affects only 1 in every 500,000 babies. Kansas State’s football players, coaches and fans have rallied around Brody. An Instagram account Mike set up to document Brody’s experience has more than 37,000 followers. K-State head football coach Chris Klieman recently mailed the Stanleys a letter, while starting quarterback Skylar Thompson shared encouraging messages with Mike on Twitter.

As noon approached the East Coast on Sept. 7, Mike Stanley settled into a chair with his 4-year-old son, Brody, in a room at the Alfred I. duPont Hospital for Children in Wilmington, Delaware, ready to watch Kansas State host Bowling Green. This was the Wildcats’ second game of the season, in their first year under new head coach Chris Klieman, so Stanley was jazzed.

He thought his son was, too, even though he knew Brody was three days removed from the fourth surgery of his young life. Brody is a K-State fan already, his dad says, and he has kept a positive attitude about his complicated situation.

Eventually, though, Brody grew disinterested. He wanted to watch SpongeBob.

“He seems to like that, which my wife is not too thrilled about,” Stanley said with a chuckle. “He loves K-State, with as much of an attention span as a 4-year-old has with a two- or three-hour game. He loves that.”

Under normal circumstances, the Stanley family — K-State graduates Mike and Marcella, and their children Brody and 4-month-old Holly — would be back home in Wichita to watch the K-State game.

But this wasn’t a normal situation.

In February 2015, at 38 weeks, Brody was born with a rare form of dwarfism, diastrophic dysplasia, which affects about 1 in every 500,000 newborns. He was born with bilateral club feet, a cleft palate and breathing issues, all common complications from his type of dwarfism.

Brody’s cleft palate, an opening in the roof of the mouth that occurs when the tissue doesn’t fuse together during development in the womb, caused breathing issues and feeding complications that forced him to spend 10 days in the Wichita hospital’s NICU (neonatal intensive care unit) and another week in more standard care.

Soon after Brody’s birth, Mike, a chiropractor, and Marcella, a physician’s assistant, learned of a specialty team in Wilmington that treats children from across the globe with skeletal dysplasias (dwarfism). So in August 2015, when Brody was 6 months old, the family took him to the Alfred I. duPont Hospital for Children.

That’s where they were told that Brody was developing both scoliosis and cervical kyphosis, a reversal of the curvature of the neck, so Brody needed to wear a neck brace until he could undergo surgery. All the while, he was undergoing weekly casting of his feet in an effort to correct his club feet, which is when feet are rotated internally at the ankles.

That was four years ago.

To wit, since then, Brody has undergone:

• Surgery on his feet at 1 year

• A cleft palate repair at 18 months

• One posterior cervical fusion at 3 1/2 years, which later failed

• Speech therapy in school and outpatient treatment once a week

• Physical therapy once a week (minimum) since he was born

Brody, doctors have told the family, is expected to make a full recovery and grow as tall as 4 feet. Now, he’s about 2 1/2 feet. Holly, the 4-month-old, is already catching up to her older brother in height.

Nearly all of Brody’s surgeries have been in Wilmington, which means since Brody’s birth, the family has taken 13 trips to Delaware. The most recent surgery, an anterior/posterior cervical fusion to correct the same procedure that failed last year, took doctors more than nine hours to complete Sept. 4.

Four days later, though, after he watched — part of — K-State’s 52-0 win over Bowling Green with his dad, Brody was progressing well and was discharged from the hospital. The family traveled back to Wichita on Sept. 12.

Still, Brody will need more surgeries down the road, ones on his feet, legs and spine — and that’s all the family is aware of now. Other issues that require surgery could surface, Mike said, even though Brody is confined to a halo, a metal brace that circles and attaches to the skull. It’s used to prevent neck bones from moving.

So it’s been a struggle at times, Mike says, staying energized and inspired to keep keeping on. Part of the support Mike receives comes from Marcella. When he’s feeling down, Marcella will step in, and vice versa.

“We communicated to each other very early on that we were going to do this,” Mike said. “We just decided to. We have each other’s back through everything. We understand that sometimes it gets difficult and we’re able to step in and take the burden from the other as we need to, to make sure that we both can get through it, but also so we don’t run ourselves into the ground trying to deal with this situation.”

That’s where the K-State football team comes in.

‘We’re in this thing to win and fight’

Several players and coaches have reached out to Stanley on Twitter, offering encouragement over direct message. Their messages haven’t been long-winded, but their content has remained the same: I hope your son is doing well. Stay strong.

That, though, doesn’t entirely capture the way K-State has rallied around Brody and his family. To document Brody’s experience, the parents have set up an Instagram account, which has attracted more than 37,000 followers. When Mike tweets a photo of Brody or an update on his status, dozens of K-State fans reply with their well wishes.

Take Thompson’s message. He told Stanley he had been following the updates on Brody, and that Brody had inspired him. He even called Brody a “warrior.” He promised to keep the boy in his prayers.

“It shows the K-State family atmosphere, that we’re all in this together,” Thompson said. “It doesn’t matter where you’re at in the country or what’s going on. If you’re wearing purple and white, we’re all together, and we’re in this thing to win and fight. I think that’s the main thing. I just wanted to display that with a little Twitter DM with him.”

Braet offered support to Mike when he began posting about Brody, but the two first became acquainted earlier, for another reason. Mike has a hobby: Photoshopping concepts of K-State football uniforms, with alternate designs, logos and color schemes. It’s earned him more than 1,000 Twitter followers, including Braet.

That, Braet says, is how he first noticed Mike. On Twitter.

So after the two met this summer at the Wichita Catbackers event, and months later, when he learned of Brody and his situation, Braet felt compelled to reach out.

He’s a husband and father himself, after all. Braet and his wife, Leah, have two daughters, Brittany and Delaney.

“I just told him, ‘Much love, thinking about you guys and your family, praying for y’all,’” Braet said. “I hit him up on the day that his son was in surgery, because I knew it was going to be a long day for him. I asked him for a favor. I (asked) if he could send me some of the logos he puts on the helmets, because I knew he would be entertained by that. I mean, I just looked at it as, ‘What are you going to do while your kid’s in surgery for 10 hours besides sit and wait?’ That’s the worst part.”

At one point during the procedure, in which doctors removed bones from Brody’s spine and installed hardware, his blood pressure plummeted and his neurological impulses stopped. He was at risk of becoming paralyzed.

His levels eventually spiked back up, but only about 40% of the way. A two-week trip could have turned into a six-month adventure. “That’s how complicated his spine is — even the best in the world didn’t get through it without it giving him a scare,” Mike says.

The positive messages kept flooding in, though. Trotter joined in.

“I’ve gotten a lot of support from him and his father since I came here,” Trotter said, “and I saw he was having a surgery that he was going through, so I just wanted to reach out. You know, this is more than a game. It’s a blessing to be a blessing sometimes. So just reaching out and making sure that they have support from us. I think that can mean the world to them.”

Trotter, as it turns out, was right.

Mike called the support the family has felt from the K-State community “overwhelming,” especially as Brody continues occupational therapy and continues to recover his fine motor skills. Support from fans, he said, is one thing.

From players and coaches during the season?

“It’s pretty amazing to me, how many people take the time to reach out and care about a little boy that they’ve never met,” Mike said. “That, to me, is pretty cool. I have a hard time putting that into words. Especially football players and coaches on the morning of a game. The fact that my son is on their mind is a pretty humbling thought. And then the overall support has been unbelievable, beyond what I could ever imagine.”

That they could return to Wichita was encouraging enough for the Stanleys, but the progression they saw from Brody made things even better. His arms are recovering. His legs are nearly back to full strength. He can move his fingers, and he can raise his arms higher as time passes.

Now that Brody is home for the time being, he can go back to doing the things that make him Brody: playing with toy trains. Playing with his dad’s old video game systems, like the Nintendo 64. Watching SpongeBob, even to his mom’s chagrin. Watching K-State games, at least parts of them.

“The physical limitations are one thing, but you put a controller in his hands, and those limitations no longer matter,” Mike said. “It’s fun to see him enjoying a lot of the games that I grew up enjoying as well. He’s a phenomenal kid. I can’t say that enough.”

Things remain challenging for the Stanleys, who Mike estimated have made it to one or two K-State football games since Brody was born. Brody will wear the halo brace for at least the rest of this season, and he’ll return to Pre-K in Andover, a Wichita suburb, in a few weeks, halo, walker and all.

When he does, Mike expects his son to relapse into a common question.

It’s one he’s prepared to answer, though, and it may represent something bigger in play.