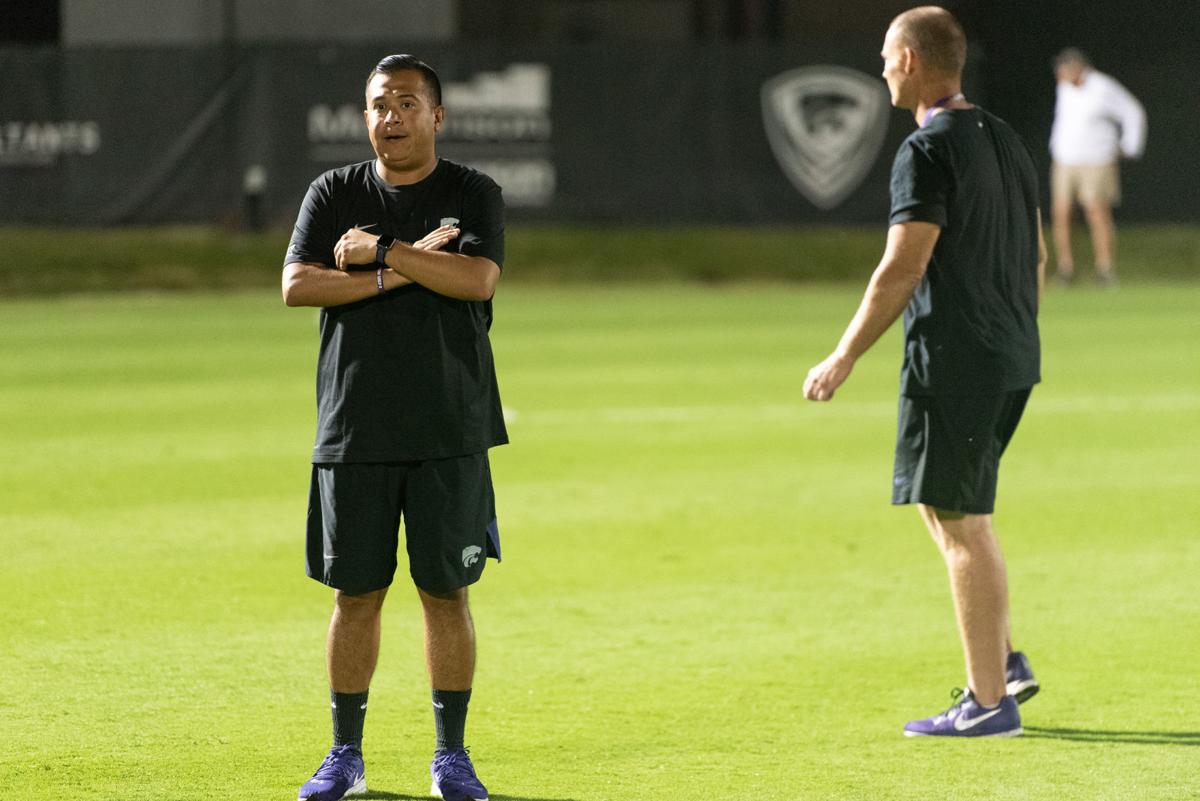 K-State soccer assistant coach Gabe Romo watches his team run off the field after giving up a goal in overtime. The Bulldogs beat the Wildcats 3-2, with one goal being a penalty kick. 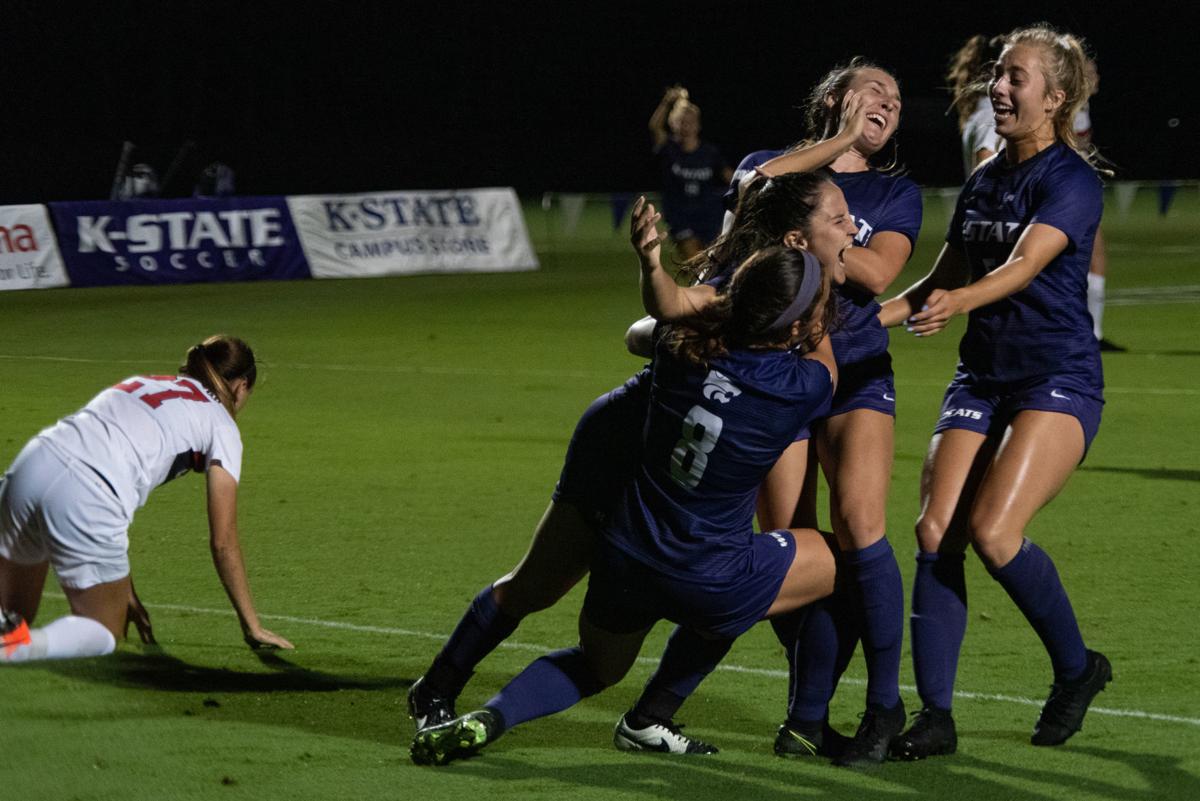 Laramie Hall (middle) celebrates with her teammates after scoring a goal against Gonzago with twelve seconds left in the game, tying up it 2-2 and sending the match into overtime on Thursday.

K-State soccer assistant coach Gabe Romo watches his team run off the field after giving up a goal in overtime. The Bulldogs beat the Wildcats 3-2, with one goal being a penalty kick.

Laramie Hall (middle) celebrates with her teammates after scoring a goal against Gonzago with twelve seconds left in the game, tying up it 2-2 and sending the match into overtime on Thursday.

In the end, after Kansas State had fallen to Gonzaga in overtime and the Wildcats had experienced the kind of turbulence and frenzy and tumult that come with five total goals in a span of roughly 20 minutes, the hosts gathered in the corner of the field.

K-State had dropped a 3-2 decision to Gonzaga at Buser Family Park, and the ending was something to behold. Gonzaga won on a walk-off penalty kick in overtime, but only after the squads traded two goals each in the final 12 minutes of regulation, including an equalizer from K-State forward Laramie Hall with four seconds left.

So when the Wildcats convened in a circle after that roller coaster, they weren’t dejected or downtrodden; they were happy, actually.

“If I remember right,” Hall said, “we were just saying, ‘You know what? We earned our goals. We did our dues on this field, and that’s how it ends?’ I think it’s kind of comical, honestly, because it almost feels like we are earning everything, and other teams get given stuff, and you’ve just got to laugh at it.”

Hall was referring to the two K-State fouls that led to the two Gonzaga penalty kicks, which the Bulldogs used to secure the win. One came in the 87th minute, giving Gonzaga a 2-1 lead, but Hall responded with a header goal in the final four seconds. The other came in overtime, which left the Wildcats (1-5-2) no chance to answer.

Either way, the surprising attitude K-State took speaks to the way it played. The two clubs played to a scoreless draw for the first 78 minutes of game time, and even when the Bulldogs seized a 1-0 lead, the Wildcats responded. Then they did it again.

It amounted to an approach that even caught K-State coach Mike Dibbini by surprise.

“I haven’t seen that in a long time,” said Dibbini, who celebrated his 43rd birthday on Thursday. “I’ve seen us play really good soccer and create chances, but the desire, I haven’t seen. It was very fun to watch tonight.”

K-State goalkeeper Emma Malsy bore the brunt of the loss, at least the most noticeable parts of it. In the 87th minute, K-State was called for a foul around the box, which gave Gonzaga a penalty kick.

Forward Madeline Gotta did the honors. Malsy didn’t have time to react, so she guessed right. Gotta went left. Gonzaga seized a 2-1 lead.

Fewer than 90 seconds into the overtime session, K-State was whistled for another foul, this time a yellow card on defender Avery Green.

Another penalty kick for Gonzaga.

Gotta returned to the spot.

“I had a feeling by the way by the way she lined up,” Malsy said, “that she probably would be going back to my left again — her right. I didn’t know the range, whether it would be high or low, so that’s where you’re like, ‘Well, I can go in-between and hope for the best.’”

Instead, the worst came to fruition. Gotta snaked it around Malsy’s outstretched gloves, and the Bulldogs (6-2-0) celebrated on enemy grass.

Still, evaluating Malsy’s game by the goals she permitted wouldn’t capture the entirety of her outing. She totaled seven saves, a season-high, including diving ones and routine ones and clutch ones.

While the Wildcats labored on offense, Malsy held things down. She gave her team a chance to win, in other words.

“I’m very proud of myself,” Malsy said. “I think I came out when I was called upon, and I think by making big saves for this team, that helps shift our momentum. At least for me, it was a confidence boost for me, and I know that I’ve proven to my teammates that I have their back, and I know they’ll always have my back.”

On her teammates: they left encouraged. All told, it was a loss, the team’s second straight. Context matters, though, and Baxter, Malsy and Hall all agreed: they showed the kind of passion Dibbini said he hadn’t seen in quite some time.

“From being on the field,” Hall said, “I noticed from me and from others, the way that we talked to each other was very much like, ‘Let’s go. Let’s go. You can do it. You can get it.’ I don’t think it’s been like that in the past. It hasn’t been bad. But maybe it just hasn’t been there.”

The Wildcats might be laughing after that match, too — just for the right reasons.

“There wasn’t a lot of breakdowns for us, and that’s how they got two of their three?” Hall said. “That was half us but also half the ref. Ours were 100% us, 100% team, and so knowing that was like, ‘You know, we did what we could. It just didn’t fall our way tonight.’”