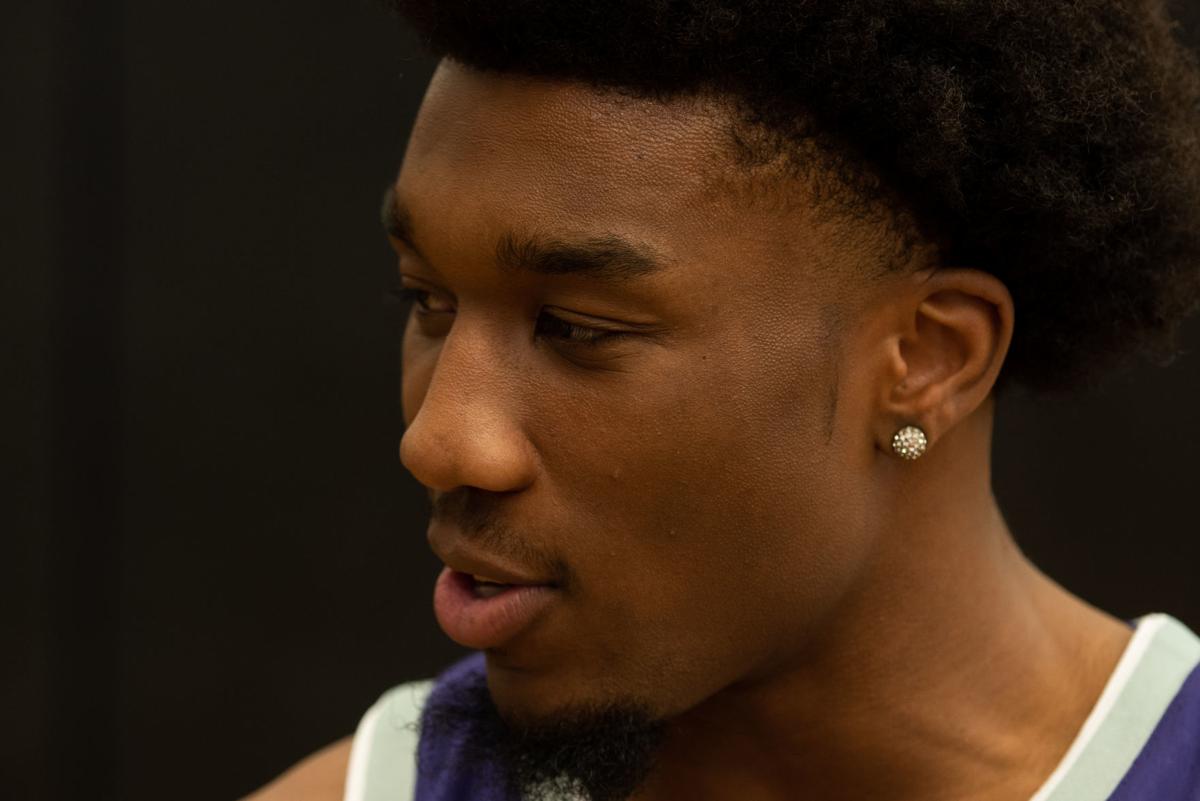 Kansas State’s Xavier Sneed answers questions during the team’s media day on Wednesday. Sneed is expected to be one of the Wildcats’ top players this season. 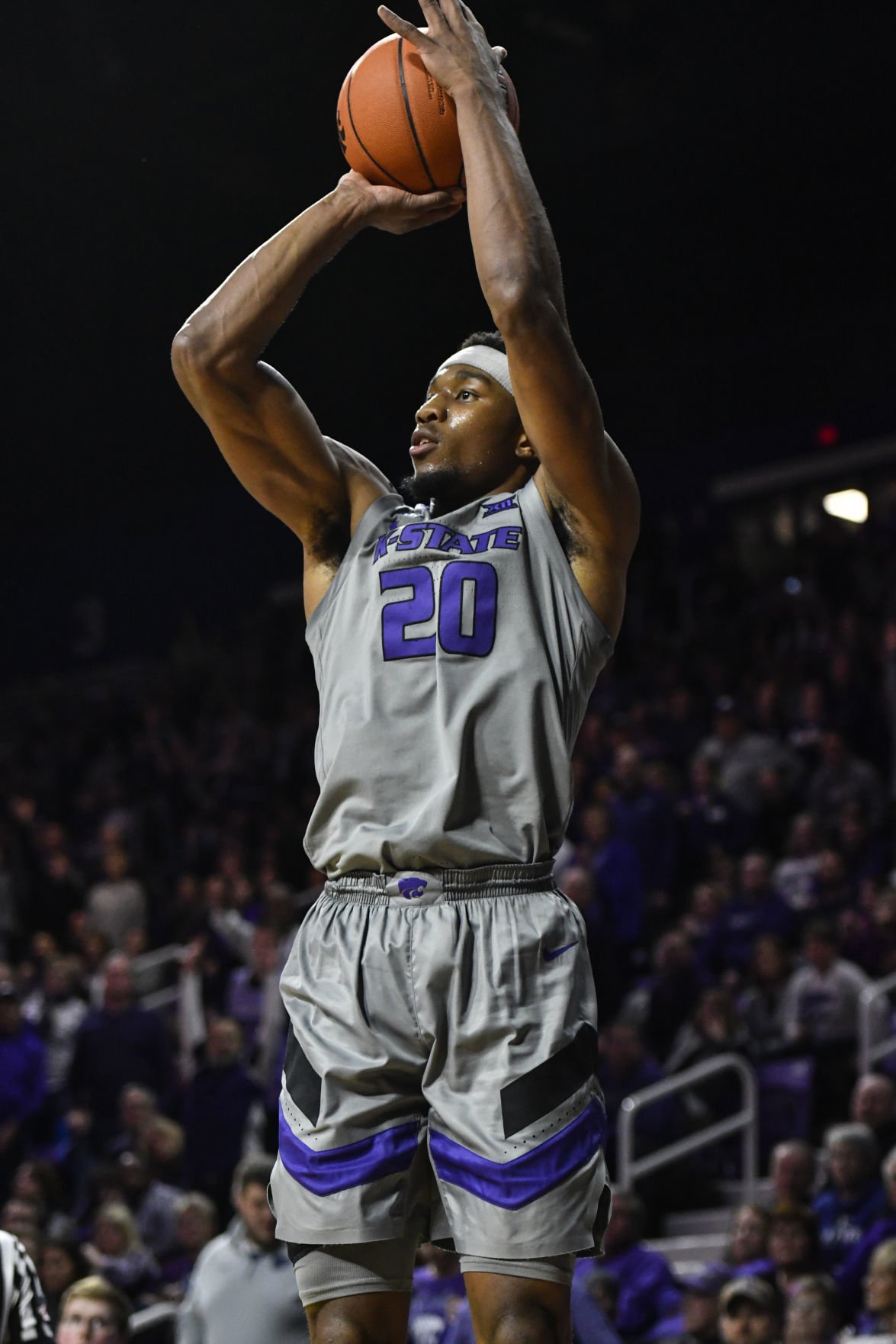 Kansas State junior forward Xavier Sneed (20) puts up a shot during a game against Baylor at Bramlage Coliseum last season.

Kansas State’s Xavier Sneed answers questions during the team’s media day on Wednesday. Sneed is expected to be one of the Wildcats’ top players this season.

Kansas State junior forward Xavier Sneed (20) puts up a shot during a game against Baylor at Bramlage Coliseum last season.

So he composed his own tweet, complete with a Will Smith GIF and caption: “Y’all done really woke up a savage. It’s up for all y’all.”

Y’all done reallly woke up a savage😈it’s up for all y’all💯 pic.twitter.com/ca5k8hwpgZ

Consider the snub motivation for Sneed.

Just don’t get him wrong. He’s not hung up on it.

“It’s always motivation, fuel to the fire. Adding something to the back pocket for the rest of the season,” Sneed said. “It’s preseason, so nobody knows anything that’s going to happen right now. Just not being too worried about. Of course, media can think what they think at the point right now. Everybody’s 0-0. So it is what it is right now.”

In Sneed’s defense, he had a case for the preseason honor. Last season, K-State’s starting small forward averaged 10.6 points, 5.5 rebounds and 1.9 assists in 30.7 minutes per game. The Wildcats won the Big 12 regular-season title, and when the season came to a close, Sneed earned All-Big 12 honorable mention honors.

He had several standout games, too.

An 18-point game against TCU. A 14-point effort against KU, helping the Wildcats dethrone the Jayhawks for the first time in four years. A 19-point outing against West Virginia, when he drilled his first five 3-pointers.

There also was K-State’s Big 12 Tournament loss to Iowa State in March, when Sneed used a head fake to get his defender in the air, blew by him and threw down a booming dunk.

Sneed posted such an impressive junior campaign that in April, he inserted in his name in the NBA Draft pool. In doing so, Sneed faced a decision: Come back to K-State or begin his pro career.

It was a process. He says he attended three NBA pro days and two tryouts, including one with the Sacramento Kings. The NCAA dictated that players had a May 29 deadline to make their decision.

When the day came, Sneed made his. He was coming back to K-State.

It just took a toll on him.

“It has not been an easy spring, summer, fall for him,” K-State coach Bruce Weber said at the team’s media day Wednesday. “There’s a lot of — and I think that I talked to you guys before this summer — the stress, the pressure that he went through going through all of the workouts, making that decision, you could see that he was mentally drained when he got here at the start of summer.”

Even so, Sneed has already begun to make improvements as he transitions into the final chapter of his K-State career. Weber said he likes Sneed’s defense. Guard Cartier Diarra said he’s seen Sneed get to the basket easier. For his part, Sneed himself said he wants to outdo his 35% mark from distance last season.

Sneed will need to do all of the above to help this K-State squad rebound from three key losses over the offseason: Kamau Stokes, Barry Brown and Dean Wade, the team’s storied senior class from last year, all of whom have graduated and moved on to playing pro basketball in different capacities.

That, Sneed said, means a bigger role. He rarely was asked to score in bunches last season. Those responsibilities went to Stokes, Brown and Wade. Instead, Sneed found his niche doing, well, everything else: rebounds, defense and making plays for teammates.

This year, that may change. He’ll be asked to become more of a leader, too.

“(It’s) an expanded role, being able to do a lot more things on the court for us,” Sneed said. “Of course, defense has always been there for me, been a key there. I’ve been working on getting my percentages up as a shooter. Being more of a volume shooter as well. Showing all aspects of my game this year is going to be a key for me.”

Sneed’s right. Defense has been a constant for him. Here’s a new wrinkle, though: This offseason, when he’s playing defense against his teammates in practice, Sneed will envision teammates as NBA players: James Harden, Steph Curry, Paul George, to name a few.

That’s because Sneed is open about his goal of making the NBA.

“Those are some of the guys,” Sneed said, “I’d be probably guarding if I was in the league right now.”

He says he likes George’s game in particular, and it’s easy to see why. There’s a four-inch height difference, but both Sneed and George are small forwards and defensive stalwarts. For that reason, Sneed has studied George’s defensive tendencies and tried to emulate them.

Listen to Sneed talk about his findings and it’s clear how much time he invests in it.

“His foot positioning — that’s what we’re looking at, footwork, with me,” Sneed said. “How to position my feet and be in the right spot to get a steal, or how to play the right play, or how to look ahead of a play and be able to find a way to get a steal.”

That’s likely music to the ears of Weber, a defensive-minded coach who implores his teams to slow games down and beat teams with defense. Sneed has been an irreplaceable part of that the past three seasons.

But Sneed began prioritizing defense long before he became a Wildcat.

“It’s Xavier Sneed,” Williams said with a wide smile. “That’s my big brother, and we’ve been through it all. He’s from where I’m from. It’s kind of hard to make it out, so defense is a big part of where we’re from. He’s doing good at that.”

That his teammates have noticed his improvements may be an even bigger compliment.

Especially because, like Diarra, they’ve tracked the intricacies involved.

“He’s the best defender on me,” Diarra said. “There’s not a lot you can do on him. He’s a big body. He knows how to bump you, get you off your lines, stuff like that. ... It’s more (about) being smarter. I don’t think it’s more lateral movement. I think it’s seeing things better.

“Knowing the person off a pump fake, and he wants to go one way, you can cut him off quick and make sure you hold him up quick and he can’t do anything else after that but pass the ball.”

The challenge for Sneed is that he can’t dedicate as much time to defense this year, not when he’s being tasked with scoring more. He won’t have to do everything — Diarra and junior forward Makol Mawien will soak up bigger roles, too — but he’ll certainly have to do more.

To Weber, that means two things: Efficiency and consistency. He wants to see Sneed hit 3s at a better clip. Get some putbacks, too.

More than that, though, Weber wants his best player to have a good time.

Even if — or because — he was left off that preseason team.

“I want him to smile, I want him to be happy,” Weber said. “If he’s happy, talking, enjoying it then I think he can be a very good player — one of the better players in the league.”