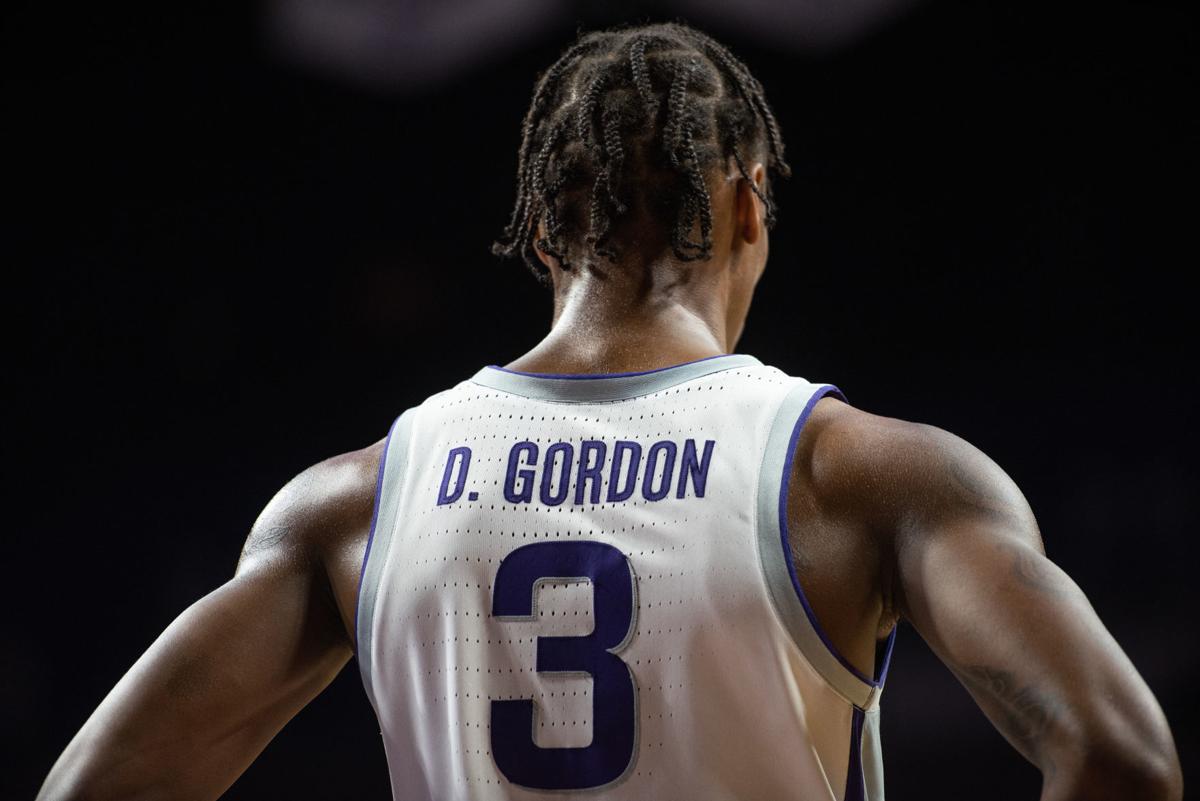 Kansas State freshman guard DaJuan Gordon stands on the court during the team’s game against Monmouth at Bramlage Coliseum on Nov. 13. As the season has progressed, Gordon has taken on a larger leadership role. 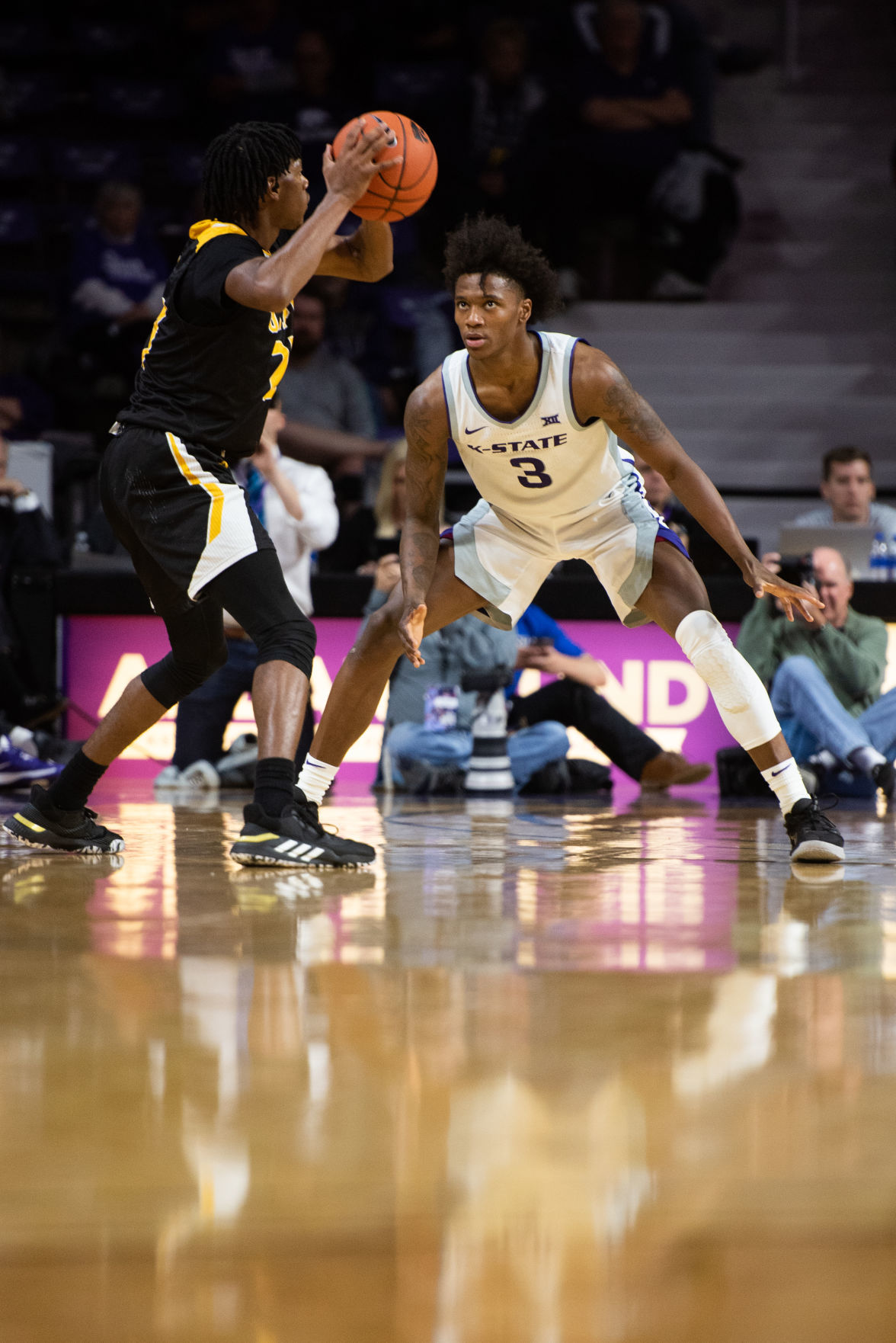 Gordon guards Arkansas-Pine Bluff’s Dequan Morris (23) in the first half of a game on Nov. 19. Gordon made his first career start last week against Texas Tech.

Kansas State freshman guard DaJuan Gordon stands on the court during the team’s game against Monmouth at Bramlage Coliseum on Nov. 13. As the season has progressed, Gordon has taken on a larger leadership role.

Gordon guards Arkansas-Pine Bluff’s Dequan Morris (23) in the first half of a game on Nov. 19. Gordon made his first career start last week against Texas Tech.

Gordon, a true freshman guard, uttered that sentence during a media session last week. It came two days after his head coach, Kansas State’s Bruce Weber, lauded Gordon’s ever-growing leadership role on the team following a 64-50 loss at Texas, a game in which the Wildcats scored their fewest points of the season. Even Weber conceded he wasn’t sure how his upperclassmen might take to a first-year player telling them what they’re doing wrong.

Here’s the thing: When you’ve lost three straight games and five out of six — the position K-State found itself in after that setback in Austin, Texas — the upperclassmen forfeited the right to feel upset. They needed someone to light a fire under them.

One day after those five fateful words, Gordon earned the first start of his career, going into the lineup in place of junior guard Mike McGuirl. It wasn’t a memorable performance for Gordon or the team; he played 33 minutes but ended with just four points and had more fouls (three) than assists (two) in a 77-63 loss to then-No. 23 Texas Tech at Bramlage Coliseum.

What the final statistics fail to capture, however, are the moments in the game when Gordon’s vocal leadership bubbled to the surface — just as Weber had noted in the days preceding it.

During one moment in the first half, Gordon scrambled to track down a long rebound. He nearly ran into his teammate, fellow guard Cartier Diarra. As close as the pair was to the out-of-bounds line, a collision likely would have resulted in another turnover. (As if the Wildcats needed one. The 20 they committed versus the Red Raiders tied a season high.) Seconds after that near-instance of Wildcat-on-Wildcat crime, Gordon shot Diarra a death glare, as if to say, “What are you doing, man? We’re on the same team.”

In the second half, after miscommunication on an inbound play, Gordon went after senior star Xavier Sneed — in a positive manner. He approached Sneed to ask (paraphrasing of course), “What happened here? Why weren’t we on the same page?”

Weber recognized Gordon possessed those all-important leadership attributes well before he ever arrived in Manhattan.

“You saw it last year with his team,” Weber said. “One, he loves to play. I said since the beginning, he’s a lot like Barry (Brown). He’s got that determination, that grit. He competes all the time. ... He just loves it, and he loves the game.”

The upperclassmen — specifically Sneed, Diarra and senior forward Makol Mawien — likely wouldn’t be as receptive to Gordon’s criticism if he didn’t throw his body on the line every single possession. But, Weber said, Gordon “backs it up with his play.” Following the loss to Texas, Gordon had a swollen eye. Bumps. Bruises.

Not that Gordon cared.

“He probably would have (gone) right back out there,” Weber said, “and not quit playing.”

Despite that defeat at the hand of the Red Raiders, Gordon put that starting experience to good use Saturday in the Wildcats’ latest game. Coming off the bench against then-No. 12 West Virginia, Gordon excelled. He scored 13 points in the first half against the Mountaineers’ stingy defense, which entered the game No. 2 in the country in field goal percentage allowed; Gordon hit 6 of his 7 shots, including a 3-for-4 showing beyond the 3-point line, for a career-high 15 points.

The only players who scored more, ironically enough? The two players who drew his ire in the previous game: Diarra (25 points) and Sneed (16).

“He stole the ball one time from (Jermaine) Haley, and Haley didn’t play the rest of the game, or not a lot, and he’s one of their key players,” Diarra said. “I think he made them real frustrated and got Coach (Bob) Huggins frustrated at them, and that helped us out as well. ... He’s always been active, every game if you go look back at it. He’s always working hard.”

That work ethic — what led Weber to say that within Gordon beats the heart of a lion — has been with him from the day he picked up a ball for the first time.

“Just growing up in Chicago playing basketball and not being given anything, having to work for myself, and being in the gym late at night with my uncle,” said Gordon, shedding light on what drives him to greatness. “It’s not being scared of anybody.”

And that means everybody.

Gordon constantly tells the coaching staff it doesn’t hold enough competitive drills during practice; he wants to play with something on the line, every time. He willingly takes on the assignment of guarding another team’s best player. (He notably tried to do what he could against the nation’s most explosive scorer, Marquette’s Markus Howard, when Xavier Sneed was in foul trouble in last month’s game. He did the same against Oklahoma’s Austin Reaves.) For all his passion, however, he still has plenty of precociousness.

Weber laughed thinking about it.

“A couple times I’ve asked rhetorical questions, and he’s answered them,” Weber said. “(I’m like), ‘You’re not supposed to answer them. I’m just talking to make you think.’ But I like that.”

Above all else, Gordon wants to win. After the Wildcats dropped to 0-3 in the Big 12 because of their loss to the Longhorns, Gordon kept with his routine. He texted Weber over and over, the message the same: “‘We’re going to win, Coach. We’re going to win.’”

That’s special, Weber said. That's what made Brown — a player Gordon long has been compared to, and hey, they both wear No. 3 — one of K-State's best players ever. In Weber’s mind, that determination is “the difference in guys being just average players and really good players.”

In that win over West Virginia, Gordon’s text finally came true. The Wildcats are in the win column in conference play. Now, another challenge awaits, as No. 3 Kansas welcomes K-State to Allen Fieldhouse for the latest installment of the Sunflower Showdown at 6 p.m.

Gordon said he can’t wait to experience the rivalry for the first time.

Then, he uttered five more words to describe his mindset against the Jayhawks.

“Just be ready to fight,” he said.

Undoubtedly, Gordon will do just that. He’s proven that much already. Win or lose, he will go down swinging. Yet no matter what Gordon accomplishes Tuesday, or in the days, months and years to come, he can’t do it alone. He needs help. Perhaps that will come in the form of his two fellow true freshmen, forwards Antonio Gordon and Montavious Murphy. Or maybe it will come next year in the most highly touted recruiting class Weber has signed at K-State. Gordon, however, will lead the charge, teammates at his side.

A lion, no matter how mighty, is nothing without his pride.