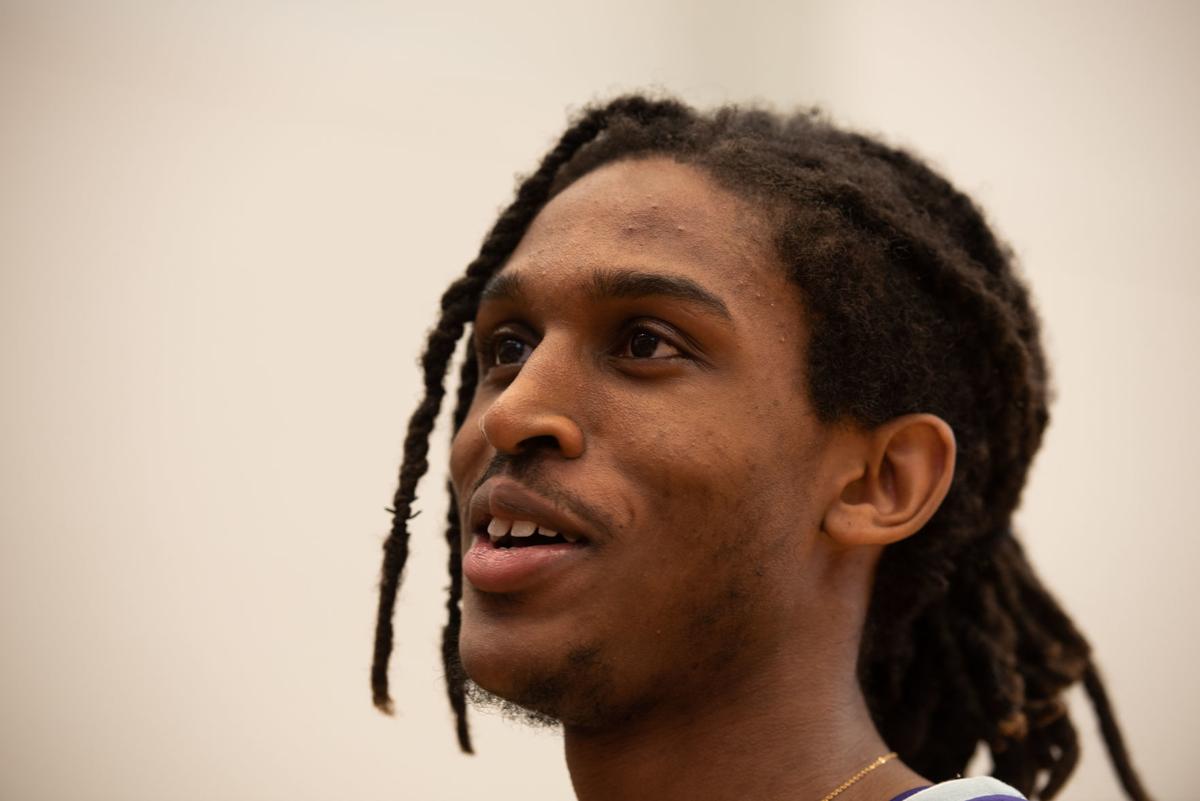 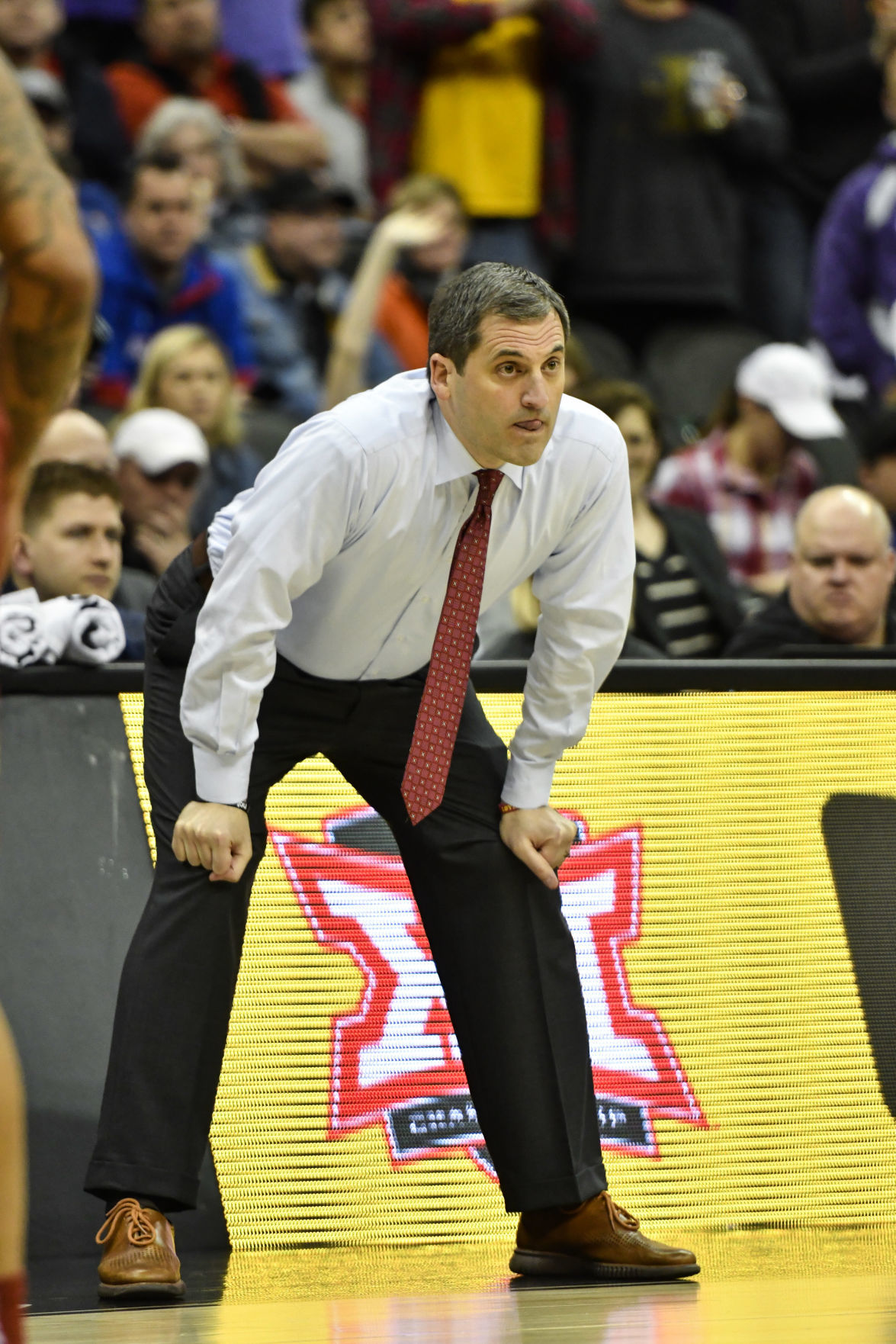 Iowa State head basketball coach Steve Prohm watches his team during the semifinal game against Kansas State at the Big 12 tournament at the Sprint Center in Kansas City last season. Prohm said he isn’t a fan of the recent rule change that will outlaw step-back jumpers, which officials now will call a traveling violation.

Iowa State head basketball coach Steve Prohm watches his team during the semifinal game against Kansas State at the Big 12 tournament at the Sprint Center in Kansas City last season. Prohm said he isn’t a fan of the recent rule change that will outlaw step-back jumpers, which officials now will call a traveling violation.

KANSAS CITY, Mo. — Think back to March, when Kansas State was trying to parlay a Big 12 regular-season championship into a conference tournament title at the Sprint Center.

K-State was in the opening stages of its semifinal matchup with Iowa State when former guard Kamau Stokes took advantage of a flare screen forward Levi Stockard set. He lobbed a pass over to guard Cartier Diarra, who caught it on the perimeter. Problem: The screen hadn’t given him enough space to get a shot off.

The shot clock was ticking, so Diarra had to make a move. He decided on a step-back.

Diarra offered a head fake left, then took one dribble to his right. He stepped back on his left foot and landed with his right foot. Then his left foot came down. He fired. Nothing but net. K-State took a six-point lead on Diarra’s triple.

Seven months later, on Wednesday, Diarra was at the very same venue, in almost the same spot, when he learned about a new rule change that would have outlawed that very move. This season, Diarra would be called for traveling.

“It’s over for me,” he said with a laugh. “I know the person guarding me wanted a travel, but the ref ain’t call that. So I guess that was probably one of the last straws that made that rule change.”

At the conference’s media day last week, Big 12 coordinator of officials Curtis Shaw announced a number of rule changes coming to college basketball this season. One of them: On step-back moves, players must land with both feet at the same time. Now, it’s a travel if a player steps back and lands with one foot after the other.

So Diarra’s 3-pointer would have been waved off.

“What we’ve told the teams is all step-back moves are going to be called travels except if he can push off one and simultaneously jump back and land on two at the same time,” Shaw said. “If you push off one, land one, two, we want it called every time because it’s indefensible. We want it taken out of the game.”

Defining a travel has become tricky business. Houston Rockets superstar James Harden, as Shaw outlined, has made the step-back mainstream. Others call it a travel. Things get murky when trying to identify the “gather step,” or the moment when the player ends his dribble.

At that point, players are allowed two legal steps. Diarra took advantage in the above example, ending his dribble then using two steps — his right foot to step back and his left to come set — to create space and fire.

“That’s crazy,” Diarra said, “because if you do it that way, it’s still necessarily two steps because you have that pivot.”

The change may be bad news for several players around the league, like Diarra. There are others, too. TCU guard Desmond Bane said the change would “take some getting used to.” Iowa State guard Tyrese Haliburton said he would keep trying the move until he’s called for traveling. Ditto for Diarra.

Haliburton and TCU coach Jamie Dixon agreed on this: Maybe officials won’t enforce the rule as strictly as currently advertised. If they do, Haliburton says he’ll change his game accordingly. Just not until then.

Iowa State coach Steve Prohm said he tended to agree with his sophomore guard. For one, Prohm said, it robs players of a move they’ve spent time developing, but it also complicates things for players with NBA potential.

The example he laid out goes like this: This season, if a player learns to play by the new college rules, he will likely begin to develop muscle memory accordingly. The next season, if he makes the jump to the NBA, he’ll have to develop another move for the professional set of rules. Sub-optimal.

“That’s a huge deal,” said Prohm, who added that the change has forced his coaching staff to discourage players from working on the move. “You’re really taking away a skill set they’ve been working on for years. There’s some gray area there when you watch the refereeing on tape, but that’s the rule. So now you’ve got to coach your kids that way.”

Dixon brought up another point: Several Big 12 teams, like K-State and Texas Tech, emphasize defense to a degree that sometimes, the only shot a player can get off is a step-back.

For K-State swingman Xavier Sneed, whose coaches and teammates say has improved drastically on defense, it’s more about defending it. He’ll leave room for the shooter to land — that’s another rule change Shaw announced — but he said he’s “going to defend you either way.”

If Sneed and other Big 12 standouts who figure to take steps forward — no pun intended — on defense, the step-back may take on even more importance.

For his part, Diarra expressed a similar sentiment. He may love the move, but he has others in his repertoire.

“I’ve just got to do simpler things,” Diarra said. “That move right there is more like a fancy move. It’s not needed. I can score the ball in different ways.”