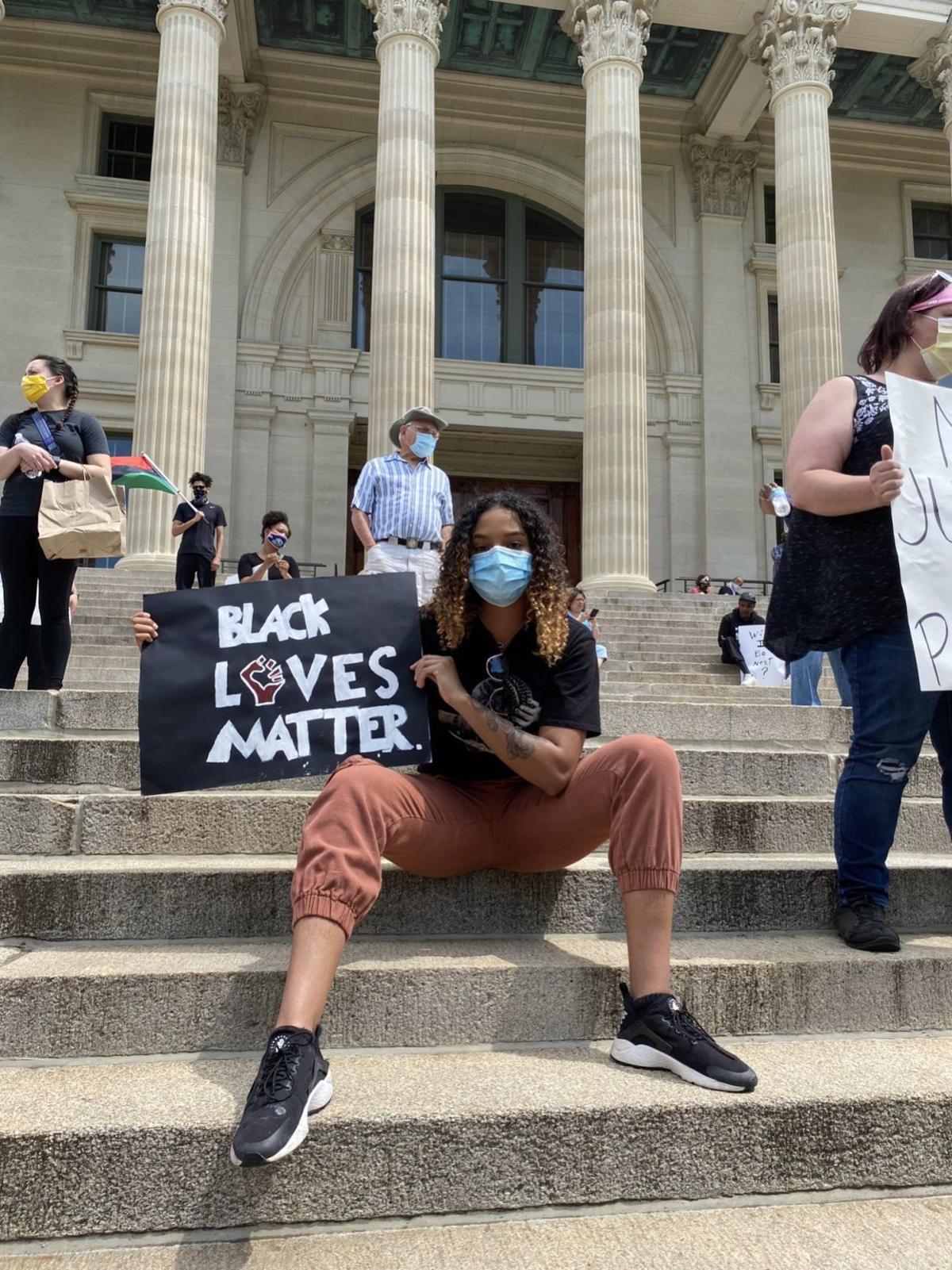 Kansas State women’s basketball guard and Manhattan High graduate Chrissy Carr holds a sign during a Black Lives Matter protest May 30 in Topeka. Carr has been vocal about the movement since the death of George Floyd. 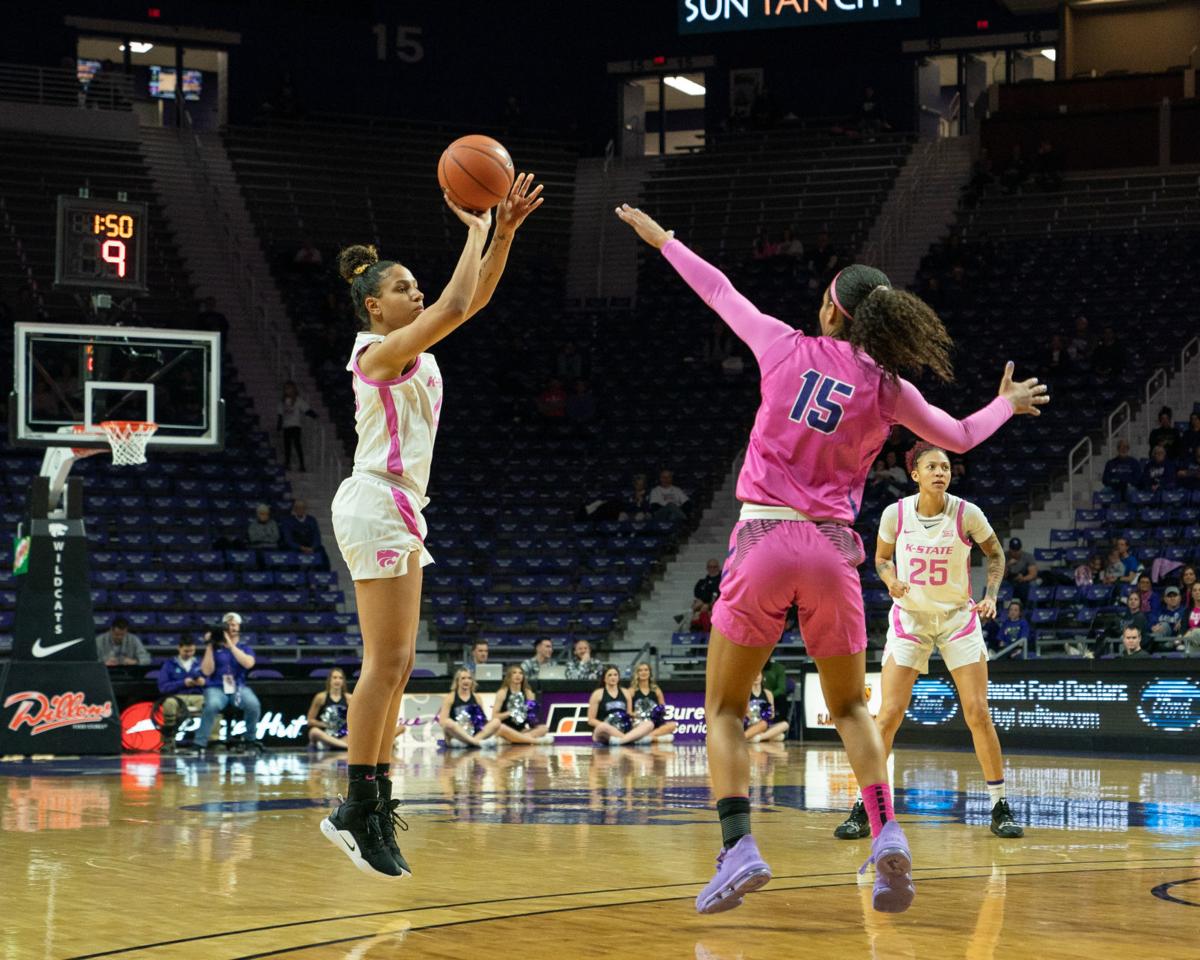 K-State’s Chrissy Carr attempts a jump shot Feb. 19 against TCU. Carr has used her platform to speak out on racial injustice.

Kansas State women’s basketball guard and Manhattan High graduate Chrissy Carr holds a sign during a Black Lives Matter protest May 30 in Topeka. Carr has been vocal about the movement since the death of George Floyd.

K-State’s Chrissy Carr attempts a jump shot Feb. 19 against TCU. Carr has used her platform to speak out on racial injustice.

What struck Chrissy Carr the most as she watched George Floyd’s killing was the familiarity of it all.

Carr, who lived in Minneapolis before moving to Manhattan, knew exactly where Floyd’s death occurred. She once walked down the exact street where Minneapolis police officer Derek Chauvin kneeled on Floyd’s neck. She used to frequent the store, Cup Foods, where Floyd’s killing occurred.

But the most heart-wrenching aspect of the video for Carr: Floyd could have been someone she knew. To her, Floyd represented a brother or a father.

“Sadness was the first feeling I had,” said Carr, a rising junior guard on Kansas State women’s basketball team. “I watched the video a bunch of times and just listening to his voice and a lot of people’s reactions, I cried a lot when I was watching that video. It was a really hard video to watch.”

The events that have transpired following Floyd’s death are well known. Protests against police brutality have spread from Minneapolis across the United States and across the world.

Carr has been part of multiple demonstrations. She started in Topeka on May 30, joining a march involving hundreds of people.

She started the march in the back of the pack, content holding her sign that read, “Black Lives Matter.” However, something pushed her to move forward. Before long, she was at the front, standing on the steps of the capitol building next to the speakers leading the protest.

She later found former K-State teammate Peyton Williams, and the two walked together during the protest. Carr led chants for the group around her during the day.

“I was like, ‘Shoot, I can yell loud on a basketball court, so might as well use it for something else, too,’” said Carr, a Manhattan High alum who led the Indians to their first girls’ basketball state title in school history in 2017. “I started chanting and people were following along. Now, I’ll start yelling some good things and not care about it.”

Despite emotions turning into words at the protest, Carr was wary of posting anything on her social media accounts. She wasn’t sure how her statements would be taken, or whether they would be something that could get her or the women’s basketball team in trouble.

“At first I was apprehensive about it because of the backlash I might get,” Carr said. “Before I tweet anything, I think about my K-State family, I think about the coaches … I didn’t want to offend anybody. I talked to my mom and she was like, ‘If this is the kind of stance you want to take, then you’ll offend some people. You’ll make some people mad. But it’s what you believe.’”

At first, the Twitter post generated a few hundred likes, which was what Carr expected. However, the tweet soon gained more attention after a talk show host quoted her tweet and used it to mock women’s basketball.

Comments started flooding in, both positive and negative. For Carr, the interaction was beneficial, as it meant her message was being seen by those who might need it.

Carr said Kansas State’s athletics department was largely supportive of the tweet. Fellow teammates, head coach Jeff Mittie and even members of the football staff voiced their approval of Carr’s message over social media. She never was asked by the athletics staff to take down the tweet.

“Once this whole protest thing started, I was tweeting out some very straightforward things. I told my mom multiple times, ‘Mom, I don’t know. I’m going to get a text. I’m going to get something from somebody saying you need to quiet down,’” Carr said. “My mom said, ‘You just keep going until someone tells you otherwise.’ Just to see even though I tweeted, ‘If you don’t support me in this, don’t support me in basketball,’ and to see how many K-State fans have my back with that means a lot, because it shows they appreciate me as someone who wears more than the No. 43.”

Carr has continued her activism since the Topeka protest and her posts. She took part in the Manhattan protests last week and has continued to tweet and retweet messages about the Black Lives Matter movement.

She’s found her voice through the movement and hopes to use it to continue to inform those who follow her that she represents more than a basketball player.

“I hope it opens their eyes to see that hey, my life does matter, too, not just because I’m an athlete at K-State, but because I’m a black student-athlete, and I really hope that’s the message that gets across,” Carr said. “People see how unfair some people are treated in this world sometimes, and whenever you’re fed up, you need to speak.”