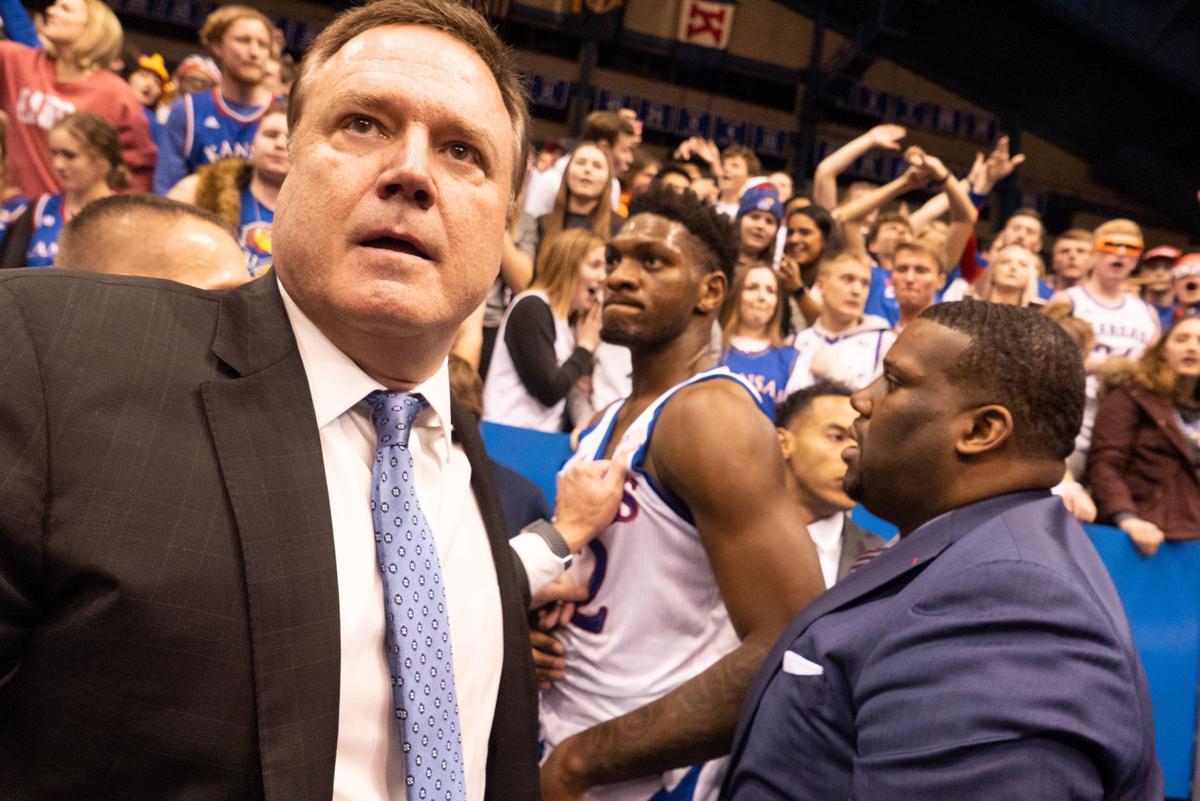 Kansas head coach Bill Self grabs Silvio De Sousa (22) by the jersey after a fight broke out between KU and K-State at the end of Tuesday’s game. 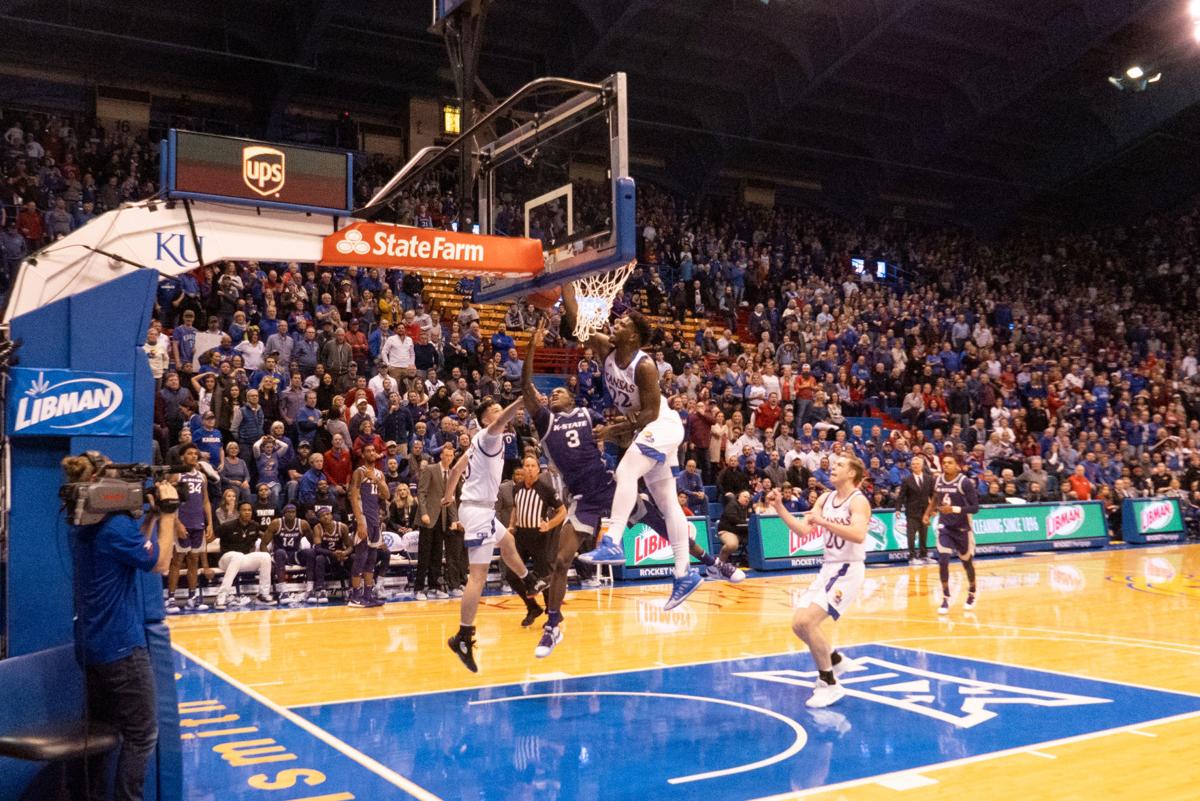 Kansas head coach Bill Self grabs Silvio De Sousa (22) by the jersey after a fight broke out between KU and K-State at the end of Tuesday’s game.

LAWRENCE — Weeks and months and years will pass and the first 2,394 seconds of Kansas State’s 81-60 loss to No. 3 Kansas Tuesday night will largely go unremembered.

The final six seconds birthed a brawl that will far overshadow the game itself and almost certainly lead to suspensions.

The outcome decided as the last six seconds approached, K-State freshman DaJuan Gordon caught KU forward Silvio De Sousa napping and poked the ball away from him. He euro-stepped to the basket, but De Sousa caught up and spiked the ball back down. Then De Sousa stood over Gordon and shouted something at him.

Some details remain hazy — who started it, who threw the first punch, who was really involved — but the main actors are clear. K-State reserve forward James Love, dressed in khakis and a polo, came sprinting over and threw punches at De Sousa, who responded. Even picked up a stool and appeared ready to hit someone with it before he dropped it.

K-State newcomers David Sloan and Antonio Gordon also got involved, but those were the only three Wildcats who did. That much is certain.

What remains up for debate is whether DaJuan Gordon should have gone for the steal in the first place.

K-State coach Bruce Weber gave mixed signals. Weber said he told his players to stop fouling in the final seconds — to “back off,” in his own words.

“But the kids are young guys,” Weber said. “They play hard. They were disappointed, frustrated. You don’t want to take that fire out of their bellies, but at the same time, you’ve got to handle it right, and it created a bad thing. Again, credit to Kansas. They kicked our butts.”

KU coach Bill Self offered a few different perspectives on the steal.

In general, if the winning team is dribbling the clock out and the opponent stops defending, Self said, it’s good etiquette to avoid scoring. Let the buzzer sound and take the win.

“If the team is behind,” Self said, “and you teach your kids to play to the whistle, or play the possession, I don’t think that you should take total offense to anything that transpires. I’m not sure that it’s the right thing to do, but I’m not going to place any blame on Gordon, going and taking his ball.

“Silvio knew he was being defended, and (Gordon) took his ball. Certainly, the way Silvio reacted to him taking his ball, going down and blocking the shot — that’s all fair game. The horn hadn’t gone off yet.

“But then what transpired after that is obviously what set everything off. So I’m not going to take offense to that. Do I think it’s right? Probably just depends on the situation. You’ve been in enough situations, in enough hostile environments and things like that that you should be mature enough to handle whatever’s thrown at you.”

No K-State or KU players were made available to the media after the game.

Making things more intriguing, and circling back to what Self pointed out: This isn’t the first time a K-State/KU game has ended with some sort of controversy.

In February 2016, when KU was dribbling out the final seconds of another blowout win over K-State in Lawrence, Jayhawk guard Brannen Greene threw down a dunk with less than a second left. That stretched KU’s lead from 16 to 18.

Then, last February, when K-State was closing out a 74-67 win over KU in Manhattan, former Wildcat guard Barry Brown flushed a dunk as the buzzer sounded. The basket didn’t count, but Brown’s message was clear.

“I just wanted to return the favor, honestly,” said Brown, who was on the court for Greene’s dunk. “Shoutout Brannen Greene.”

Which brings us back to the Tuesday’s fight.

There’s history here, not just in the rivalry itself, but in the moments that have ended different installments. The most recent clearly was the most violent.

It wasn’t what either coach wanted to see, either.

“All we talk about is, ‘Act right, treat people right, play the right way,’” Weber said. “That’s been our way at K-State. I don’t know if (former head football) Coach (Bill) Snyder said it, but that’s how he brought his guys along. That’s what makes K-State special. It probably shouldn’t have happened.”

Self was more forward in his assessment.

“That,” Self said, “was an embarrassment on our part.”

Who's to blame for brawl at end of Kansas State/Kansas game? It's complicated.

LAWRENCE — How one chooses to dole out blame for the unfortunate, unsightly end of Tuesday’s Sunflower Showdown is complicated.