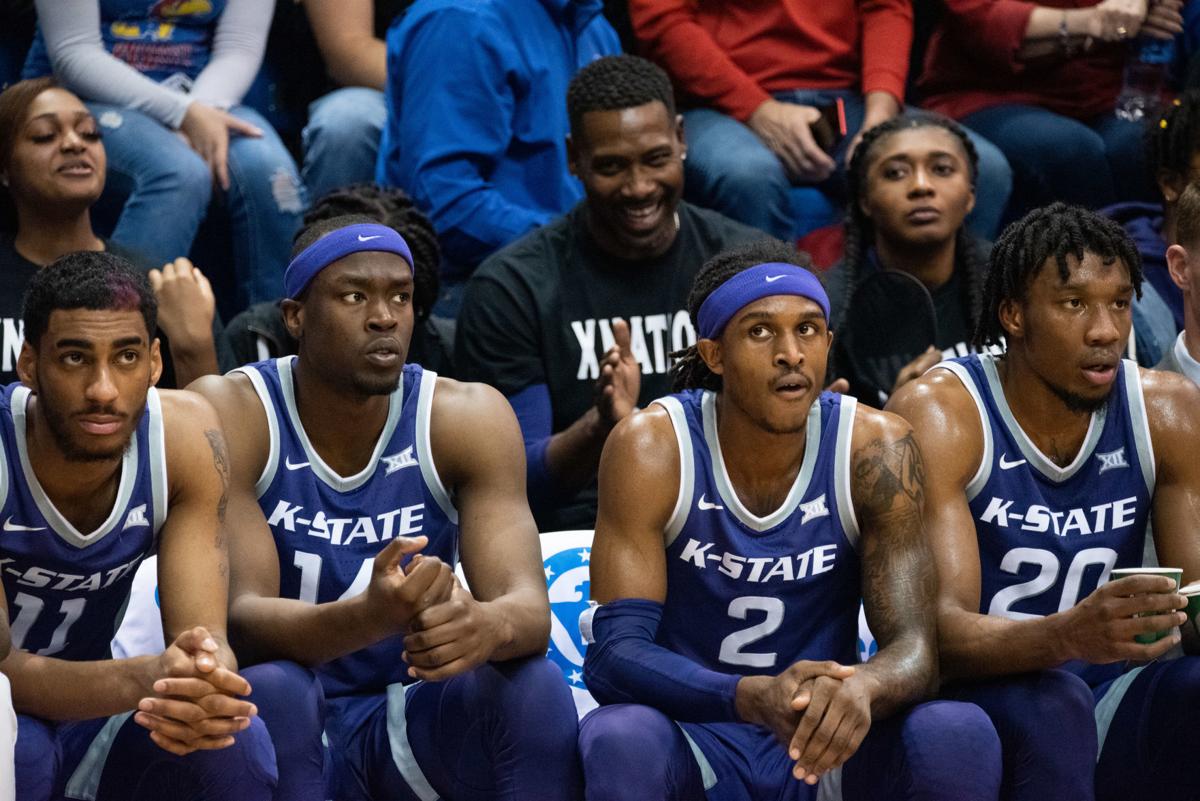 Kansas State’s Antonio Gordon (11), Makol Mawien (14), Cartier Diarra (2) and Xavier Sneed (20) sit on the bench and watch their team during the second half of Tuesday’s game against Kansas in Lawrence. The No. 3 Jayhawks won 81-60, handing the Wildcats their 14th consecutive loss at Allen Fieldhouse. 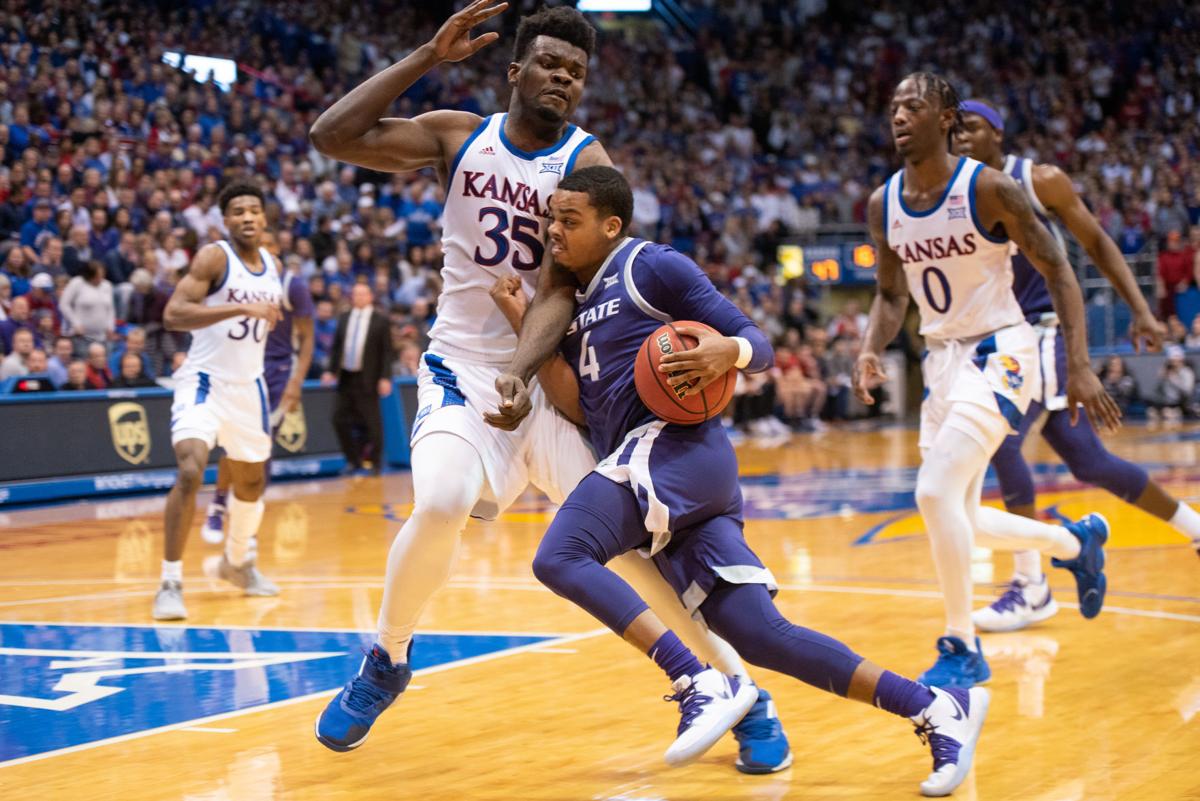 Kansas State’s David Sloan (4) drives the ball while being guarded by Udoka Azubuike (35) at the beginning of the second half of Tuesday’s game in Lawrence.. Sloan scored a team- and career-high 17 points in the Wildcats’ 81-60 loss.

Kansas State’s Antonio Gordon (11), Makol Mawien (14), Cartier Diarra (2) and Xavier Sneed (20) sit on the bench and watch their team during the second half of Tuesday’s game against Kansas in Lawrence. The No. 3 Jayhawks won 81-60, handing the Wildcats their 14th consecutive loss at Allen Fieldhouse.

Kansas State’s David Sloan (4) drives the ball while being guarded by Udoka Azubuike (35) at the beginning of the second half of Tuesday’s game in Lawrence.. Sloan scored a team- and career-high 17 points in the Wildcats’ 81-60 loss.

One that no one else will remember.

Braun, a reserve guard for Kansas, scored a game- and career-high 20 points in the Sunflower Showdown, leading the hosts to an 81-60 win over Kansas State at Allen Fieldhouse. Despite his superlative performance — 7-for-15 from the field, including a 6 of 10 mark beyond the 3-point line — off the bench, an unsightly brawl that spilled into handicapped seating behind the basket with just one second remaining overshadowed Braun’s efforts.

Much to Bill Self’s chagrin.

“We should be in here talking about Christian Braun,” said Self, who won his 14th straight game at home against K-State as KU’s head coach, “and selfishness definitely created a situation where that’s not going to be the storyline whatsoever.”

No players from either team met with media members afterward.

It only added to Self’s frustration that Braun is a Kansas native — hailing from Burlington — who won three consecutive state titles during his high school career at Blue Valley Northwest. Self recalled the many Sunflower State natives who “have taken great pride” in participating in the K-State/KU rivalry contests, from Dean Wade to Wayne Simien.

Braun, Self said, is no different.

“I thought he was terrific and the lid came off (the basket). Still, we shot the ball pretty poorly,” Self said. “We were 3 of 18 if it wasn’t for Christian shooting the ball from 3. So that’s obviously something we’ve got to get better at. But I thought he was the best player in the game.”

“Christian had a special night for them, made some 3s,” said Weber, who fell to 4-17 in his head-to-head meetings with Self, including an 0-for-9 mark in Lawrence. “We had a special night the other day against West Virginia. ... They had a spark. You get games like that — it happens at home.”

What doesn’t happen is K-State (8-10, 1-5 Big 12) is winning at Allen Fieldhouse. Tuesday marked the 14th time in as many seasons the Wildcats hopped on the team bus for the ride home, westbound on Interstate 70, saddled with yet another loss in Lawrence.

At least in the early going, K-State had positives it could point to.

A minute and a half into Tuesday’s game, David Sloan rose and slammed home a dunk on a fast break to give K-State a 2-0 lead. After Kansas’ Udoka Azubuike responded to knot the game at 2-all, the Wildcats edged back ahead, 5-2, on a 3-pointer from senior wing Xavier Sneed.

At the first media timeout, which came at the 15:45 mark, the Wildcats had fought to a 7-7 draw with the No. 3 Jayhawks.

Coming out of the timeout, however, the two teams reprised familiar roles. The Jayhawks surged. The Wildcats wilted. Allen Fieldhouse once again become a house of horrors for K-State.

KU put its stamp on the game after that first fateful stoppage, going on a 9-0 run to take a 16-7 lead. That eventually ballooned to a 19-2 surge. And just like that, with only 4:15 of game time gone by, the Wildcats found themselves in a 26-9 hole.

K-State went on a 4-0 run, courtesy of a pair of layups by senior forward Makol Mawien, to draw within 13 (26-13) with 7:52 to play in the half. But the Wildcats never got closer than that before heading into the locker room down 39-23.

The second half started with a pair of 8-0 runs, first by KU, then by K-State. But both teams were merely playing out the string of a contest long since decided. Just as in the first half, the Wildcats couldn’t trim the deficit below 13, which they did following a 3-point splash by true freshman guard DaJuan Gordon that made it 49-36 in favor of the hosts with 14:05 remaining.

“We just never could get over the hump to make it tough on them,” Weber said. “We took some tough shots. We turned it over. We didn’t give ourselves a chance.”

Aside from Braun, the Jayhawks had two other players finish with double-digit point totals: Azubuike had 10 — to go along with a game-high 14 rebounds — while sophomore guard Devon Dotson added 18.

Weber praised Sloan’s effort, given that it’s the first time he’s scored more than 10 points and that he nearly doubled his personal best of nine, which came in Saturday’s win over West Virginia.

“He had some of those turnovers early, but he can make some plays,” Weber said. “He gets downhill for a little guy, gets in that paint and makes some good plays. Got a little pull-up jumper, which is nice. Reads the defense. Obviously, he gave us a lot more than a lot of guys. The only thing is his defensive awareness and his breakdowns. But we might have to live with that, too, to have a little better offense.”

“Credit to them,” Weber said. “They kicked our butt in so many ways.”