Kansas State midfielder Brookelynn Entz battles for the ball during a home game against Baylor on Sept. 26. Entz scored both goals in K-State’s 2-1 victory over Iowa State on Friday. 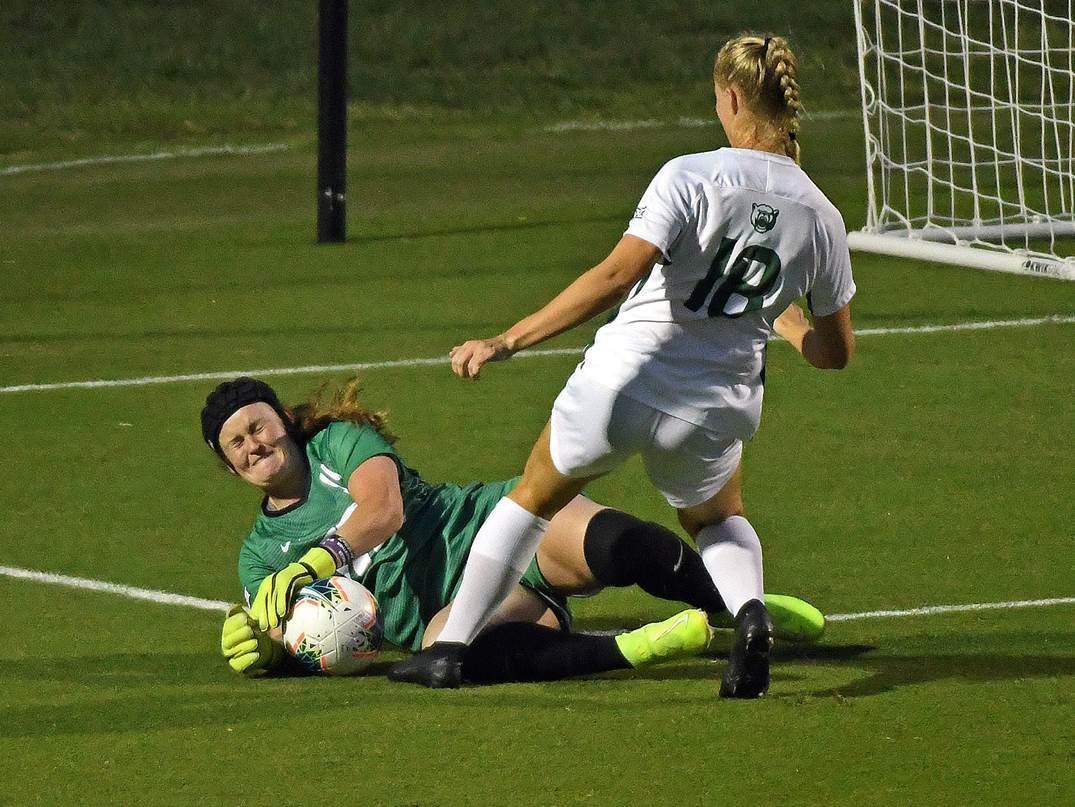 Kansas State midfielder Brookelynn Entz battles for the ball during a home game against Baylor on Sept. 26. Entz scored both goals in K-State’s 2-1 victory over Iowa State on Friday.

A shade over 90 seconds remained in a scoreless match between Kansas State and Baylor Thursday night, when K-State goalkeeper Rachel Harris settled in front of the net, waited for the high-arcing shot to come lofting in and made an easy save. Her eighth of the night. A restless Buser Family Park cheered its approval.

It was among the easiest of the program-record 12 saves Harris made against Baylor. She was a stalwart, keeping K-State afloat even in the moments when it seemed certain the Bears, the defending Big 12 regular-season champions, finally would score.

It was the one save Harris couldn’t make that doomed the Wildcats.

In the second 10-minute overtime session, Baylor midfielder Ally Henderson wound up to take a corner kick. She lifted it to the left side, where midfielder Giulian Cunningham leapt, put her head on the ball and deposited it in the back of the net.

Baylor’s 1-0 win over K-State in both team’s conference opener was long, which the Wildcats liked, and physical, which the Bears liked. It was the kind of match that could have benefited K-State, which hasn’t won a Big 12 game since 2017, nearly two calendar years ago.

Instead, the Wildcats (2-6-2, 0-1-0 Big 12) dropped their second straight match. It’s their fourth loss in their last five contests.

“For us, it’s frustrating, because we’ve been working hard and it feels good in our team,” said K-State forward Brookelynn Entz, who led her group with three shots, one on goal. “It feels like we should be winning, even when we’re on the field. But it’s just not coming for us. It’s kind of a difficult one to take.”

Baylor’s game-winning goal aside, the story of the match was Harris, and the way she gave her squad chances to win.

Harris made a bevy of key saves, including one in the final seconds of the first half — when she gloved a desperation Baylor shot that would have gone in otherwise — and midway through the second, when she reached up and snared another dangerous shot.

One of the most important saves Harris made came in the 81st minute. Falling backward, she reached her right hand up and deflected what likely would have turned into a goal. She made a similar save in the 86th minute. The shots kept coming, but Harris never wavered.

“I was watching her, it was like she was flying through the air,” Entz said. “It was insane. It just sucks that we couldn’t get the win for her. She played so hard for us. She saved us so many times. She’s an amazing player, amazing leader for us on the field.”

Harris hasn’t always had the starting keeper position locked down. She’s rotated with senior keeper Emma Malsy, who yielded five goals in K-State’s 5-0 loss to No. 7 BYU on Saturday.

K-State’s goalkeeper position has resembled a revolving door this season, in other words. Yet if Thursday’s match was a play, Harris made her audition for the starting role moving forward.

“She was extremely impressive,” K-State coach Mike Dibbini said. “She did a great job of keeping us in the same, making big save after big save. That’s what we need. She gave us life. She was very impressive tonight.”

For her part, Harris was less forthcoming about her sterling outing.

“I mean, saves are saves,” she said. “I was in the right place at the right time for a couple of them.”

From a bird’s eye perspective: This was a battle. Physical. Fast-paced. Quick swings of momentum. It was the kind of match Baylor wanted it to be, and K-State fought back.

K-State did well to expect the physical style Baylor (5-2-3, 1-0-0) has built its identity around. In practice this week, the Wildcats simulated it, receiving passes with players on their backs and harassing them in ways other conference opponents will be less likely to do.

When the Wildcats experienced the real thing Thursday night, they parried it — eventually, at least.

“I think early on, it was an adjustment,” Dibbini said, “but once we got into the second half, we figured out that we just need to play the way we can play. It got better.”

K-State will return to action at 1 p.m. Sunday afternoon to host Texas.

For the Wildcats, who Entz said still want to make the conference tournament come November, there’s work to be done. Entz and Dibbini both acknowledged that much.

But luck, Dibbini said, also plays a part in all this.

“We just couldn’t get that one lucky break,” Dibbini said. “That’s what we’re looking for — one break to get us around that corner.”