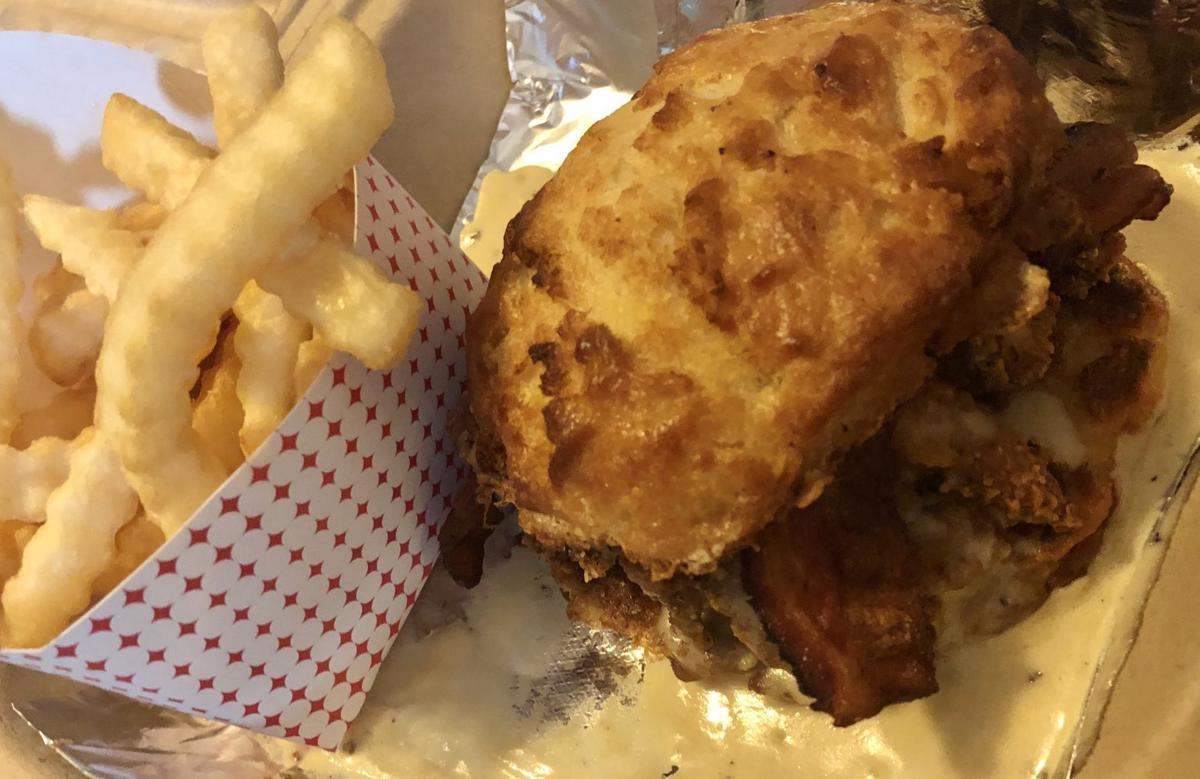 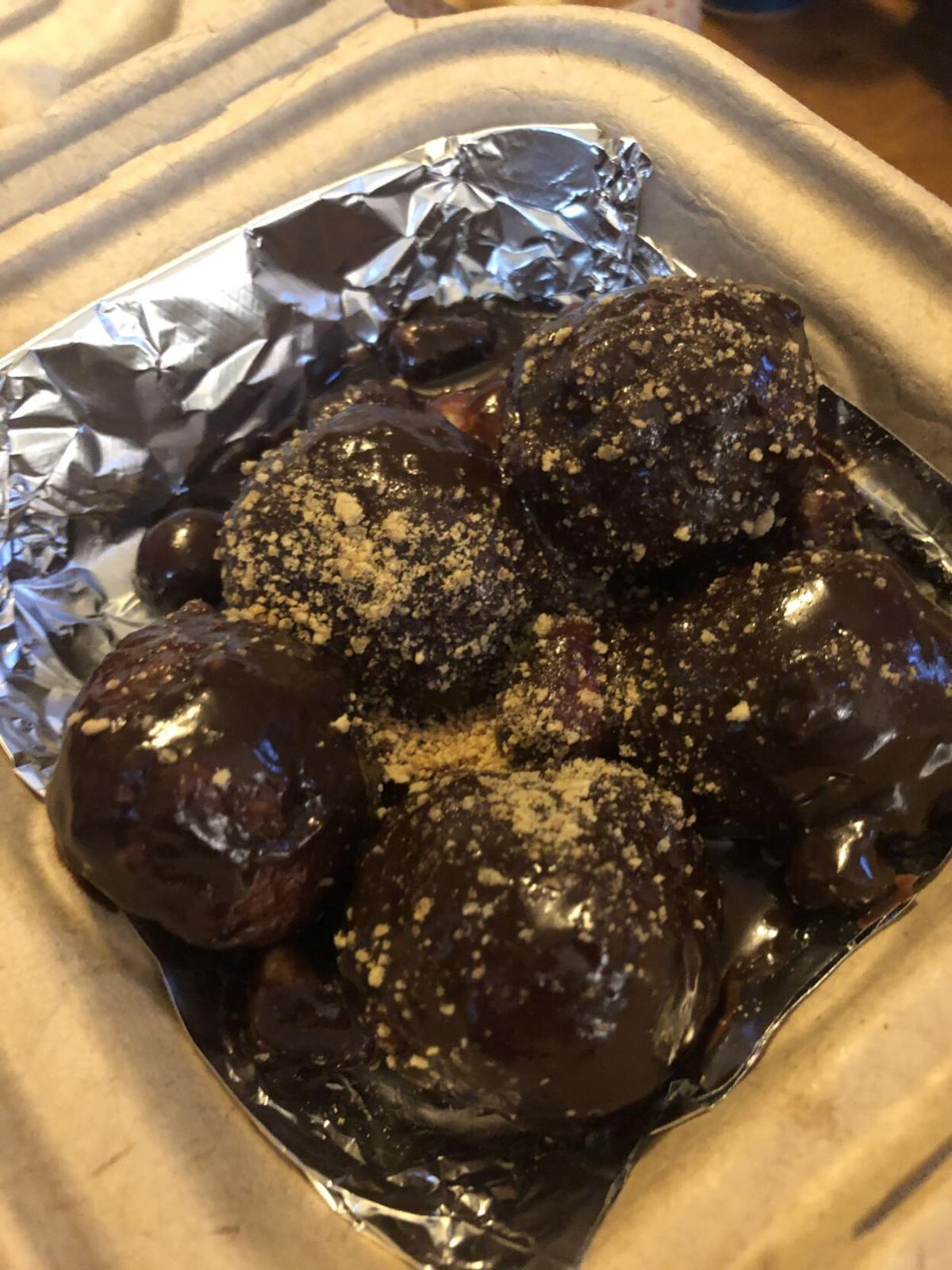 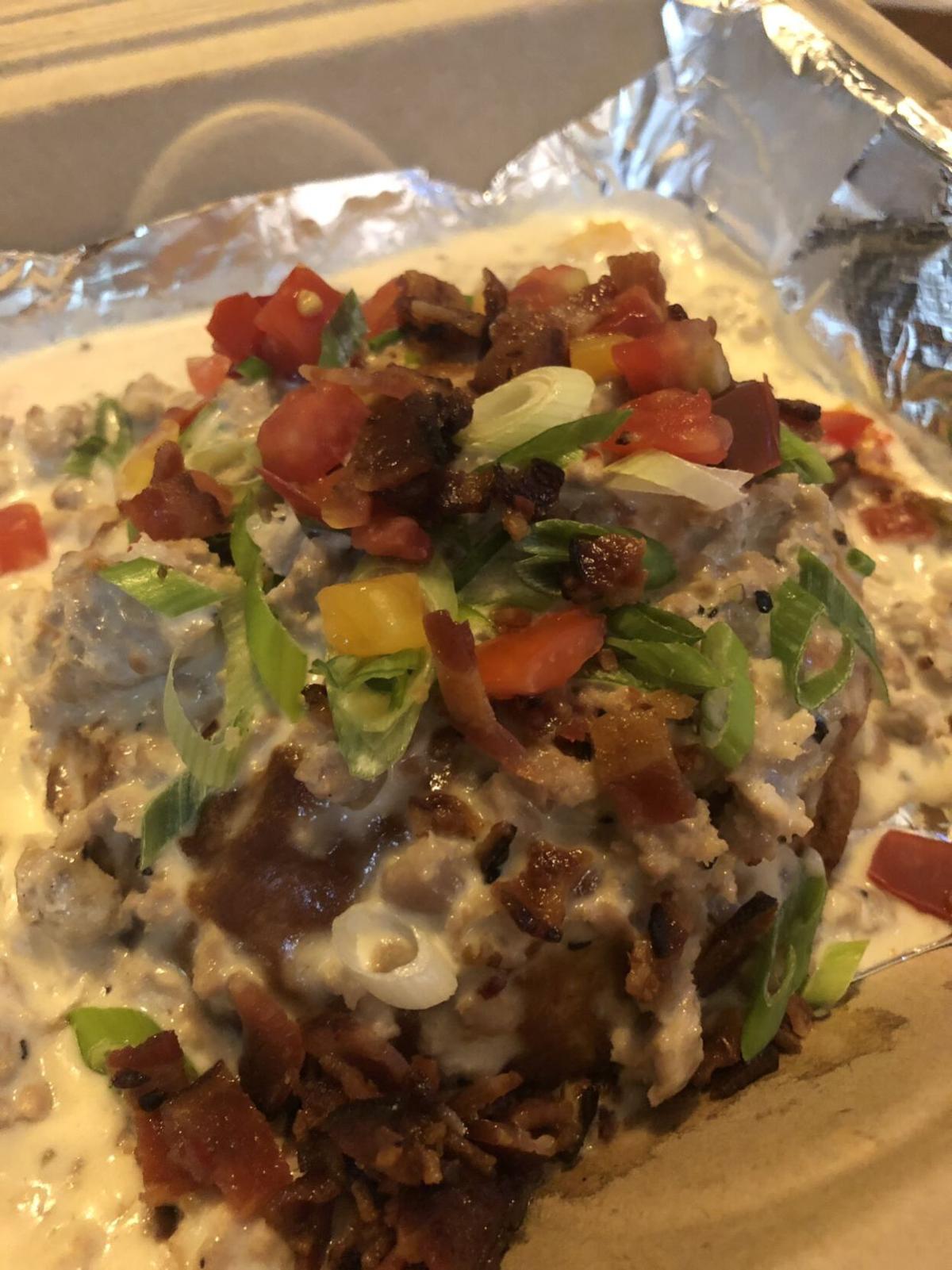 The classic version of biscuits and gravy with pork sausage, plus green onions, bacon bits and tomatoes ($7).

The classic version of biscuits and gravy with pork sausage, plus green onions, bacon bits and tomatoes ($7).

This is an odd restaurant review, because it cannot really address the ambience of the place.

My surroundings during my first meal from Guilty Biscuit, the new casual eatery in west Manhattan, included, for instance, my toddler spilling his milk on the living room rug.

Did that make for a relaxing dining experience? Not exactly. But did a warm biscuit topped with crispy fried chicken make my night better? Absolutely.

Perhaps, then, Guilty Biscuit, 3033 Anderson Ave. in Village Plaza, is onto something. With a takeout-only menu featuring sandwiches built on big, buttery drop biscuits, it might just be the restaurant we need right now.

This is the new venture by managing partner Evan Grier, former owner with his wife, Andrea, of Harry’s, the longtime fine-dining establishment downtown that closed in July. Guilty Biscuit is about as far as one can get from the white-tablecloth sensibility of Harry’s, but it’s not so different from his company’s other businesses, Bourbon & Baker and Tallgrass Taphouse, both of which have fun, eclectic menus.

Guilty Biscuit borrows some of Bourbon & Baker’s Southern influence: the namesake sandwich, “The Guilty Biscuit,” $8, features a French toast biscuit, fried chicken, cream gravy and pecan bacon. The fried chicken had a thin, crispy coating and was juicy inside.

Perhaps even better, though, was the Avocado Egg Biscuit, $8. The broiled egg had a perfectly runny yolk. That plus the hollandaise kept the sandwich from being dry. Fresh basil, herbed tomatoes and lemon gave it a fresh zing to cut through the fat in the other components.

If you have a biscuit restaurant, you probably have to offer biscuits and gravy, right? Guilty Biscuit has two kinds: A classic version with pork sausage, plus green onions, bacon bits and tomatoes ($7), and one with chorizo gravy, cilantro, pickled onions and jalapenos. Not being a big spicy person, I went for the classic, which did not disappoint.

Guilty Biscuit also had plenty of non-biscuit choices, though.

The O.G. Tomato & Goat Cheese, $8.50, sounded very close to the bruschetta that Harry’s served, except smaller and with naan bread. But I can’t wait to try the Crab & Mango bruschetta with green onion smoked salmon cream cheese and crab mango goat cheese relish.

Parents, take note: this place has a solid kids’ menu. We tried the Mac Cluckers, $8, chicken nuggets with macaroni and cheese. It was a good portion, and the red pepper aoili offered as one of the dipping sauces was good enough to lick out of the container — which my son did.

For sides, we tried the crinkle-cut fries, $4, which were crisp and felt a little nostalgic, as well as the mixed grain and green salad ($3.75), which was a little dry but was good enough that my kale-averse husband finished it.

We didn’t try any drinks, but Guilty Biscuit has plenty of those, too — “loaded” and “unloaded.” I’ll look forward to trying the Guilty Punch, sold by the cup or by the bottle. It’s nice that so many restaurants are offering adult beverages that way these days.

The food was ready at the time promised when we picked it up, and everything was still warm when we opened it at home, which is impressive.

It might seem like a crazy time to open a restaurant, but giving people something to indulge in — at home, at a modest price point — seems to make a lot of sense. I hope it’s very successful.