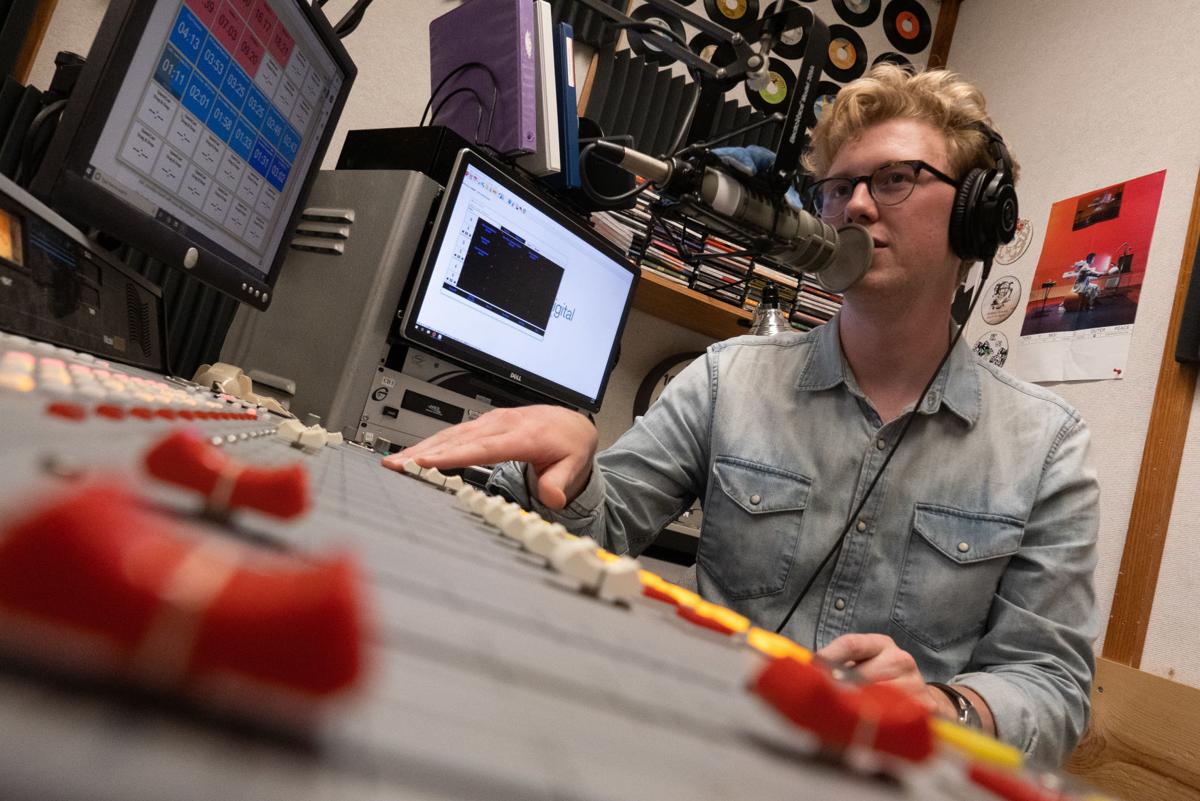 Zach St Clair talks to Trey Kuhlmann while live on air for Wildcat 91.9 FM. The station is celebrating seven decades. 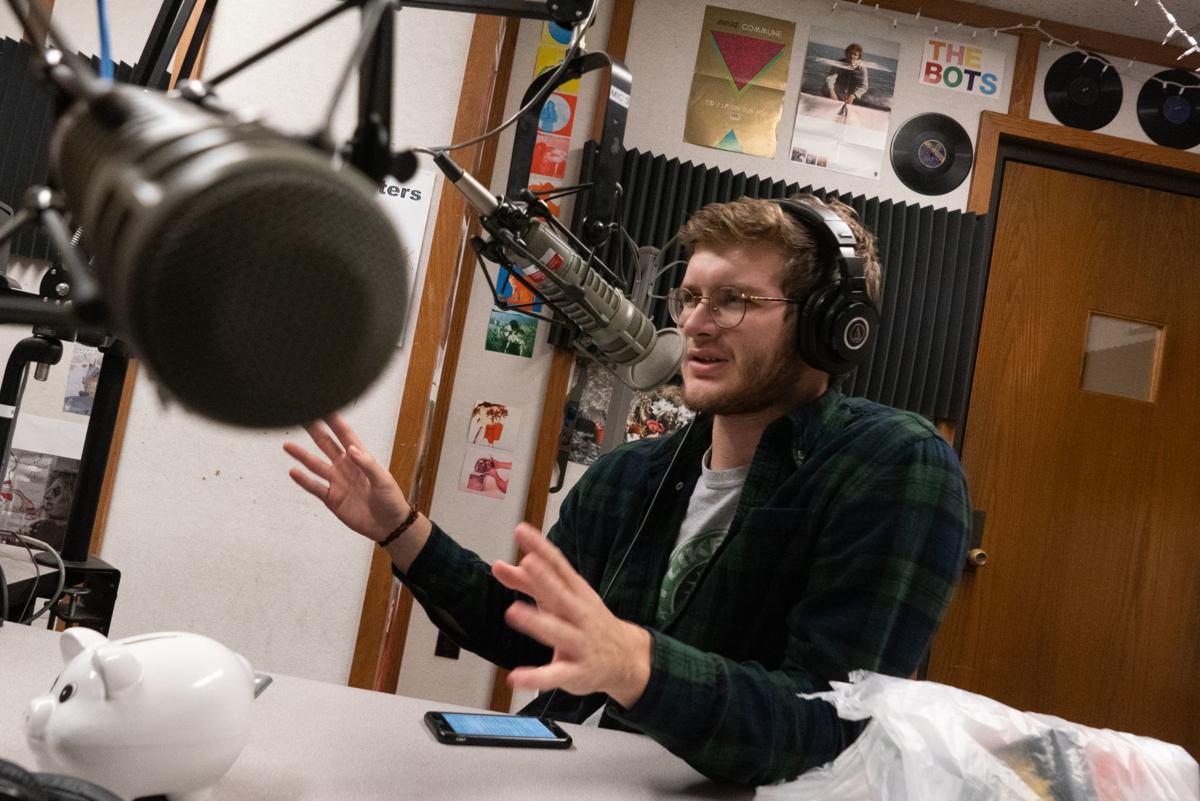 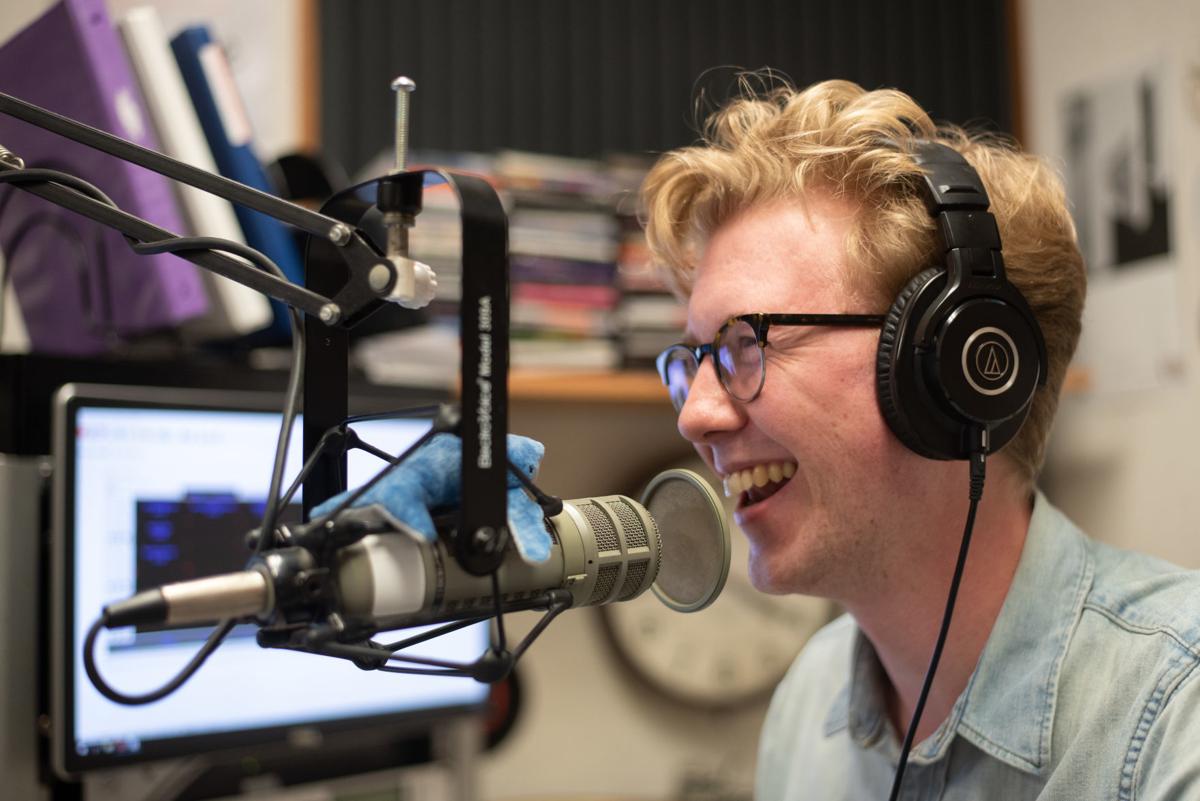 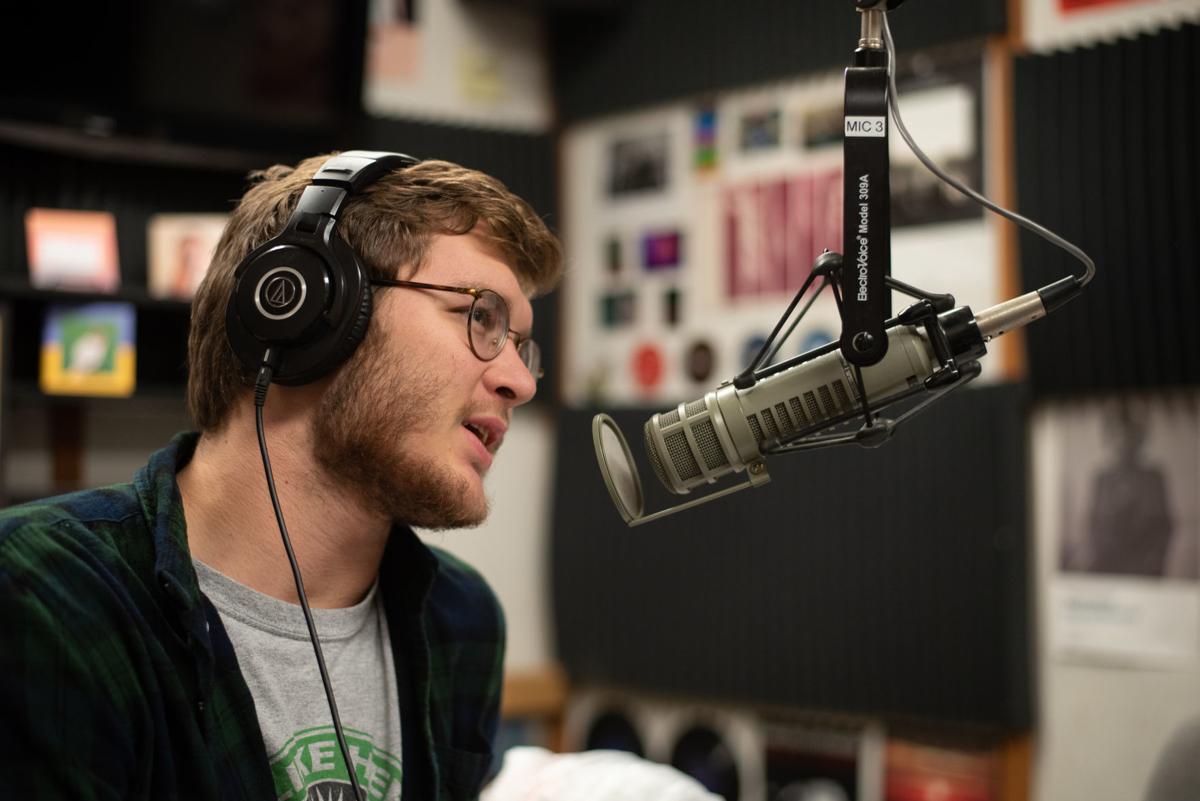 Kuhlmann is the news director for 91.9 FM. 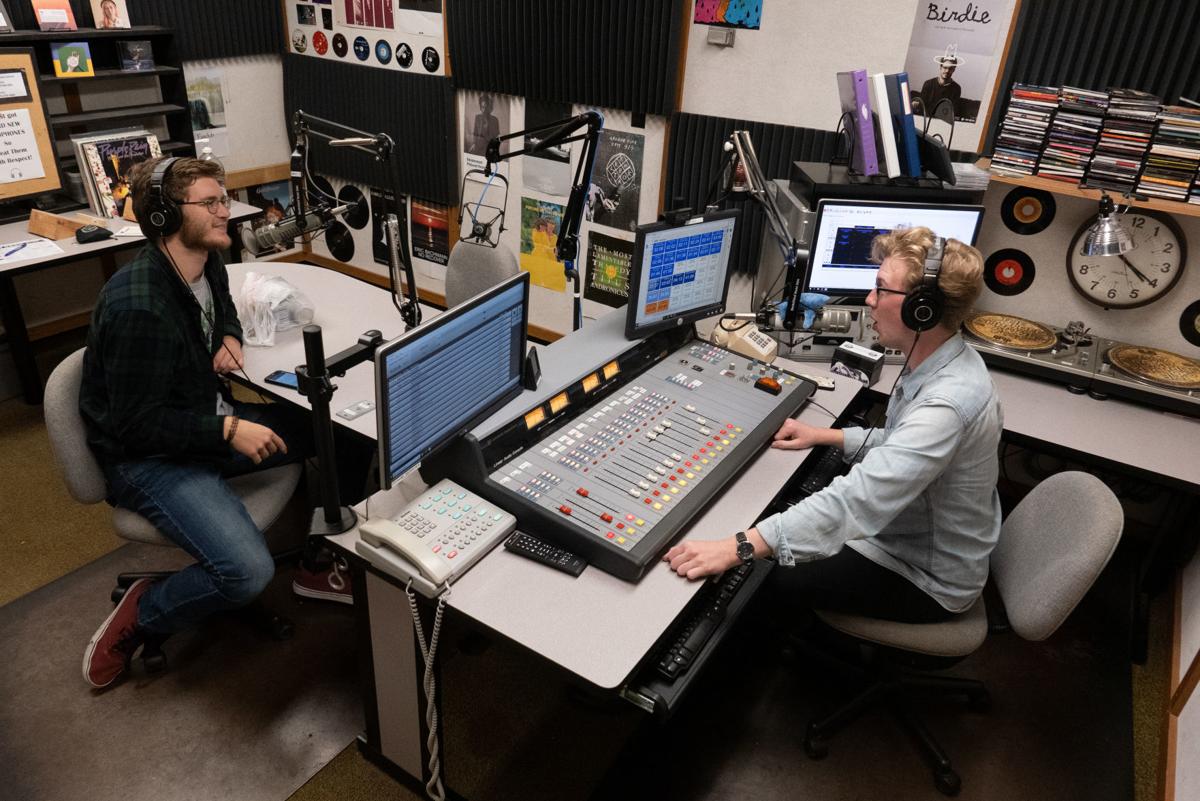 From left, Kuhlmann and St Clair talk with one another while live on air for 91.9 FM, a K-State radio station run by students on the third floor of McCain Auditorium.

Zach St Clair talks to Trey Kuhlmann while live on air for Wildcat 91.9 FM. The station is celebrating seven decades.

Kuhlmann is the news director for 91.9 FM.

From left, Kuhlmann and St Clair talk with one another while live on air for 91.9 FM, a K-State radio station run by students on the third floor of McCain Auditorium.

Every weekday at 4:02 p.m., after the NBC radio report runs at the top of the hour, the drum fill plays and a guitar fades into Zach St Clair’s afternoon radio show.

For two hours each day, St Clair, a senior at K-State and program director at Wildcat 91.9, hosts the station’s afternoon drive show, which he called a relaxed, music-based show with occasional talk show segments, with news director Trey Kuhlmann.

St Clair and his fellow radio hosts and DJs at the station are only the latest in the hundreds, if not thousands, of K-State students who have been on the air in the radio station’s history. With its 70th anniversary this year, the station, which has a five-county listening area, claims to be the longest continuously operated FM college radio station in the country.

While the station itself has moved around campus (it had been housed in Nichols Hall until a fire gutted the building in 1969), it has broadcast on the same frequency since 1949. It’s now housed in McCain Auditorium.

“There were some that were founded before us,” St Clair said, “but they have taken time off or stopped running, so the continuously running part is our main claim.”

The students eventually settled on Wildcat 91.9, which it had gone by previously, as a way to connect the station to the rest of campus, despite the fact that several other campus organizations include the word “wildcat” in their names. At an agricultural university like K-State, it can be otherwise difficult for the station, which plays alternative and hip-hop music, to fit in the campus’s identity.

“The way that I thought of it, and what got us on board, is that there is a certain identity to the name Wildcat,” St Clair said. “We go to this school, we’re part of it, and we do the work. Don’t we have a right to be a part of that identity?”

The station’s broadcast license lists adviser Ian Punnett as the station chief operator, but students handle the bulk of the day-to-day operations. Punnett replaces Vern Wirka, who retired from teaching and advising the station after having held the position since 2011.

Punnett, who occasionally hosts paranormal and fringe science radio program, “Coast to Coast AM,” said it takes dedication for the students to put in the work they do at the station, since it’s not really a hobby but more of a responsibility.

Running the non-commercial station can be more difficult but also easier, because the station isn’t subject to the same market forces a commercial station would, Punnett said. That allows the students more liberty to pick what they broadcast and focus on what they think the listenership wants. It can be difficult to measure the success and reach of the station, because it doesn’t pay for market research or ratings.

But by other measures, the station has had a positive impact in the community.

“We can only go by feedback, and it’s been nothing but positive,” Punnett said.

Zach Perez is a sophomore who became involved with the station as a freshman. He thought it’d be a fun experience, so he took up a 7 a.m. DJ shift every weekend, and he found it funny when the same construction workers would call in every morning and request the same songs. He’s now the music assistant and hosts “The Garage,” a specialty local music show from 7-8 p.m. Thursdays.

“There’s no set personality in the station,” Perez said. “We’re all very different people. We all come together on this, and I’m surprised how much we’ve become friends outside of work too. Everyone is really cool but in a unique way.”

In putting in his chapter of the station’s history, Perez said the station has lasted as long as it has because the station puts students and their creativity above all else in its approach.

“I think it’s the people who have the positions we do and interest in the radio,” Perez said. “Interest comes and goes, and classes fluctuate, but it’s really just about people with ideas who come to the station. They might have cool ideas for a radio drama, or an idea for a podcast or live show.”

St Clair said the station provides dozens of students the chance to get involved and obtain experience, either for a potential career in radio or just as a cultural experience.

Funding for college stations often comes from the higher education institutions that host them, and the station, which is owned by the Kansas Board of Regents, receives much of its budget from student privilege fees, which ensure students get those broadcast opportunities.

“All of our on-air production, all of our partnerships, the music that we play — all of that are decisions that we make right here as opposed to stations that have someone external with a lot of influence,” St Clair said. “It’s very much driven by students, and that’s where a lot of the heart of the station is. The people who are here are the ones who make it their own.”

What will it take for the station to make 100 years?

“We put a lot of work to make this the best that we can, but the way that a station like this is going to survive is through the support of the community,” St Clair said. “They can come to our events, keep posted with us on social media and on-air. We’re always happy to partner with local organizations, off and on campus.”

Vern Wirka grew up in the radio business.