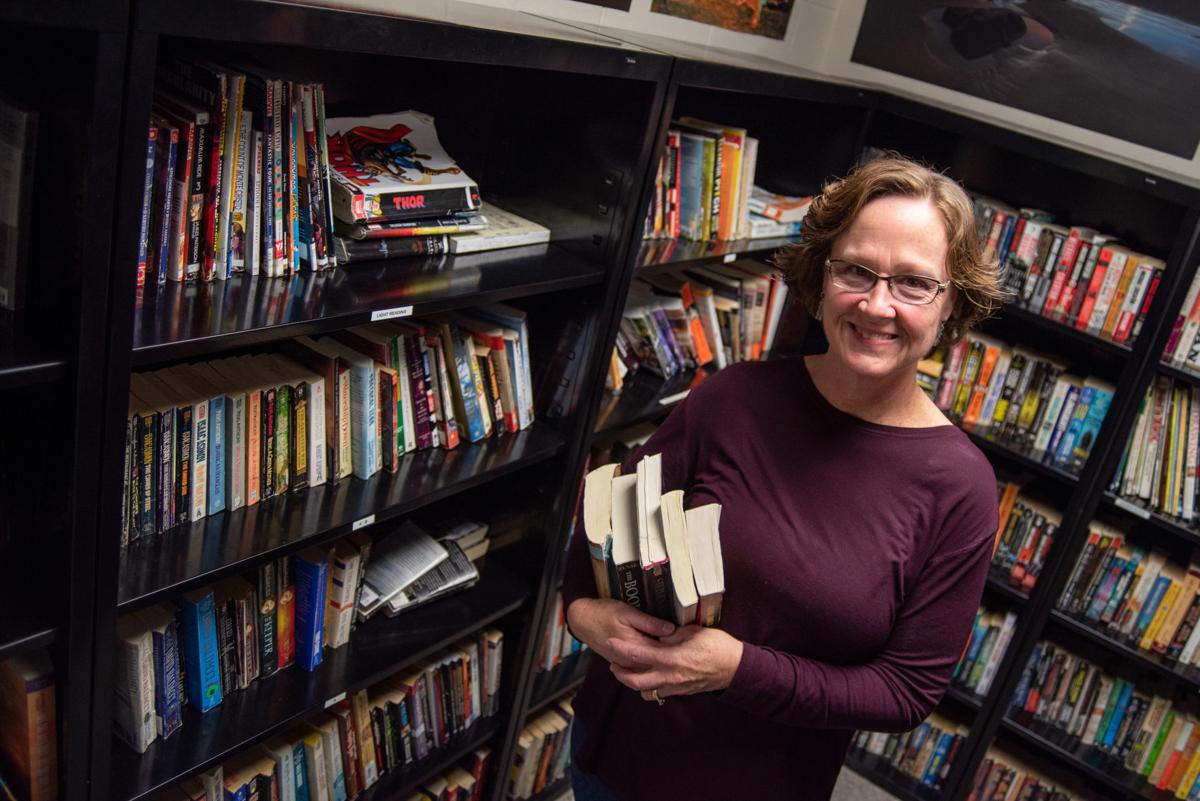 Riley County Jail librarian Kathy Pauls stands inside of the library. Pauls, a former elementary school teacher, said she began volunteering once a week at the jail about five years ago. It was a way for her to continue her passion for education. 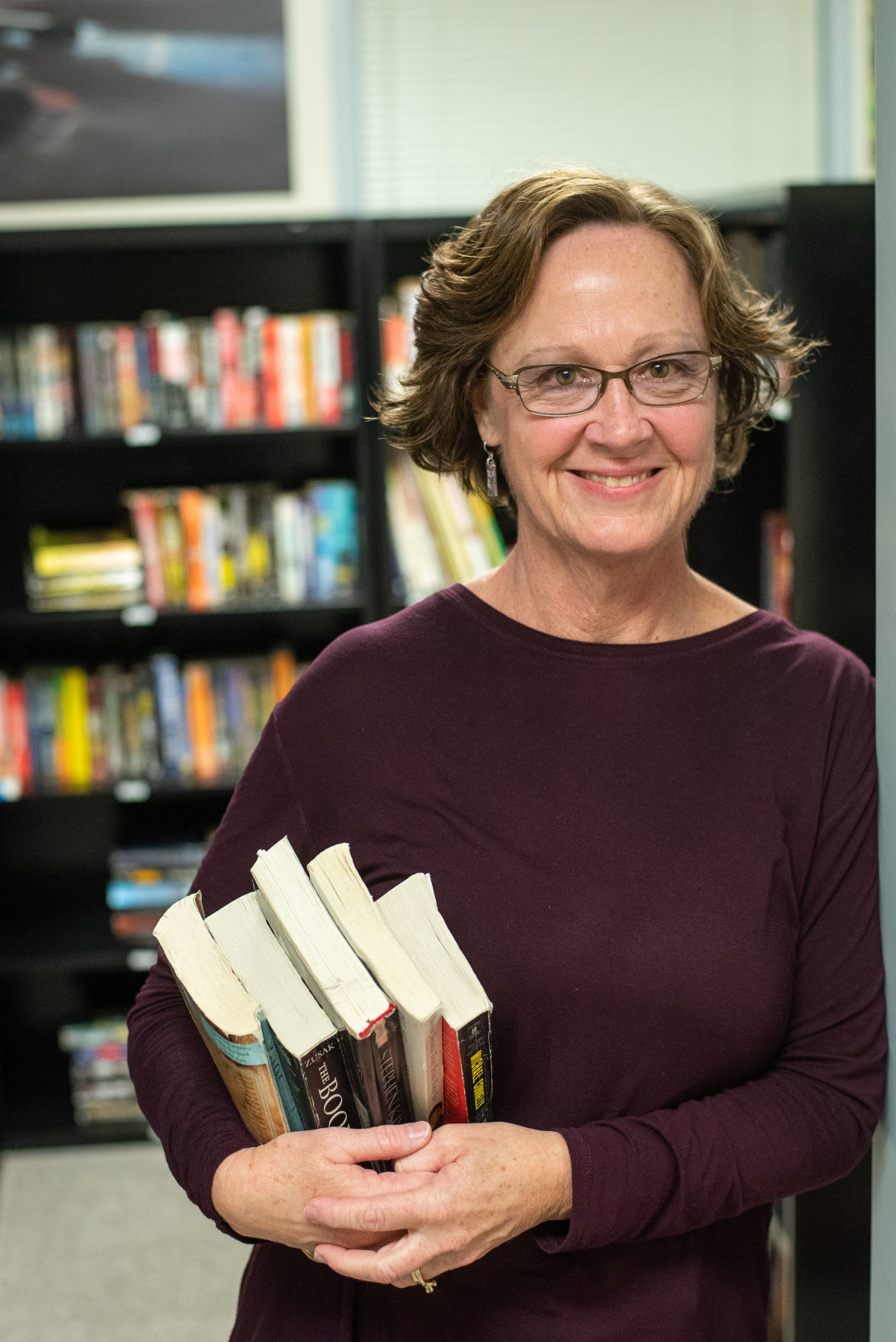 Riley County Jail librarian, Kathy Paul, stands in the entrance to the library. 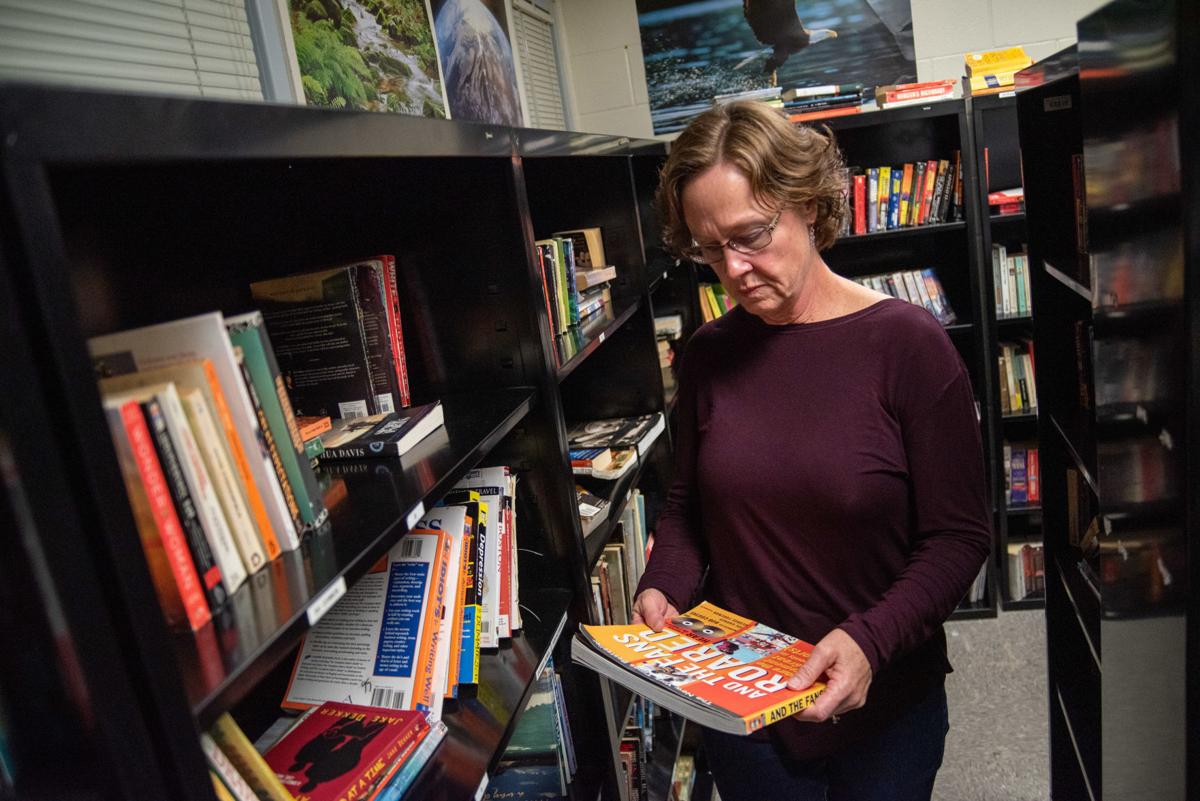 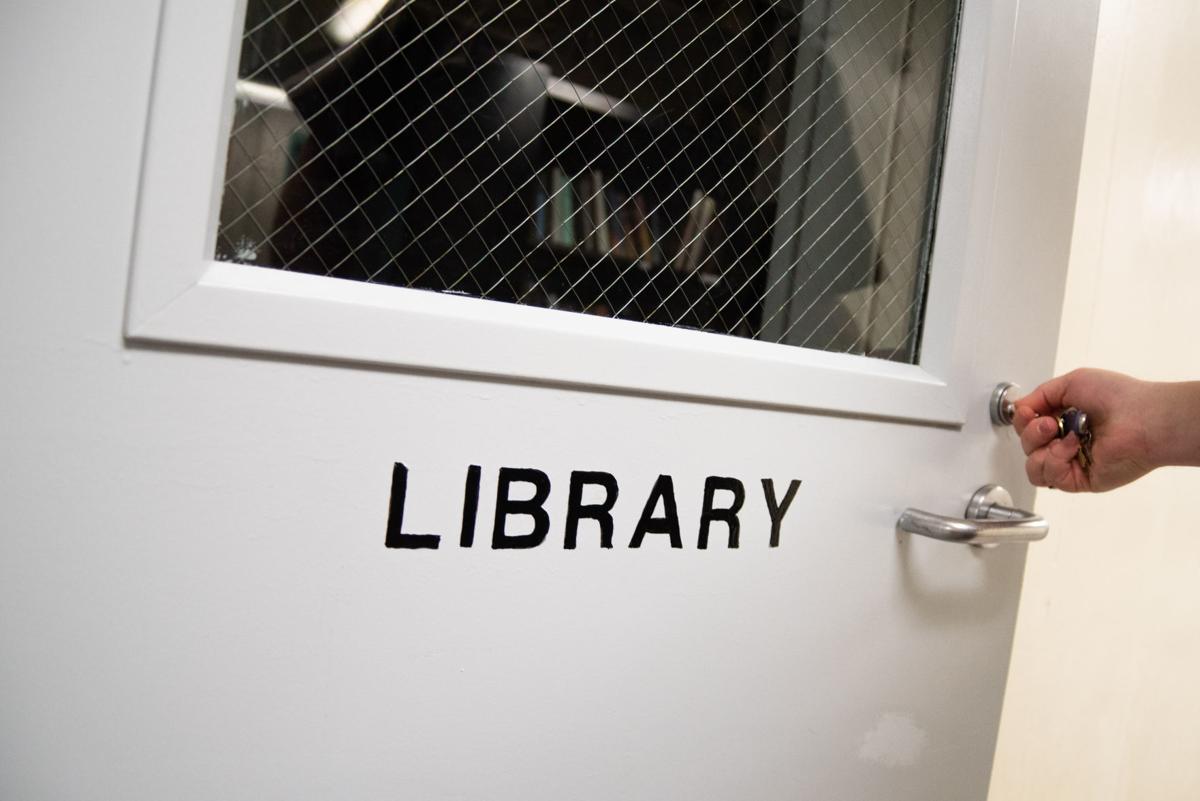 Capt. Derek Woods, jail commander, opens up the Riley County Jail Library with a key so Kathy Pauls can add donated books to the shelves. 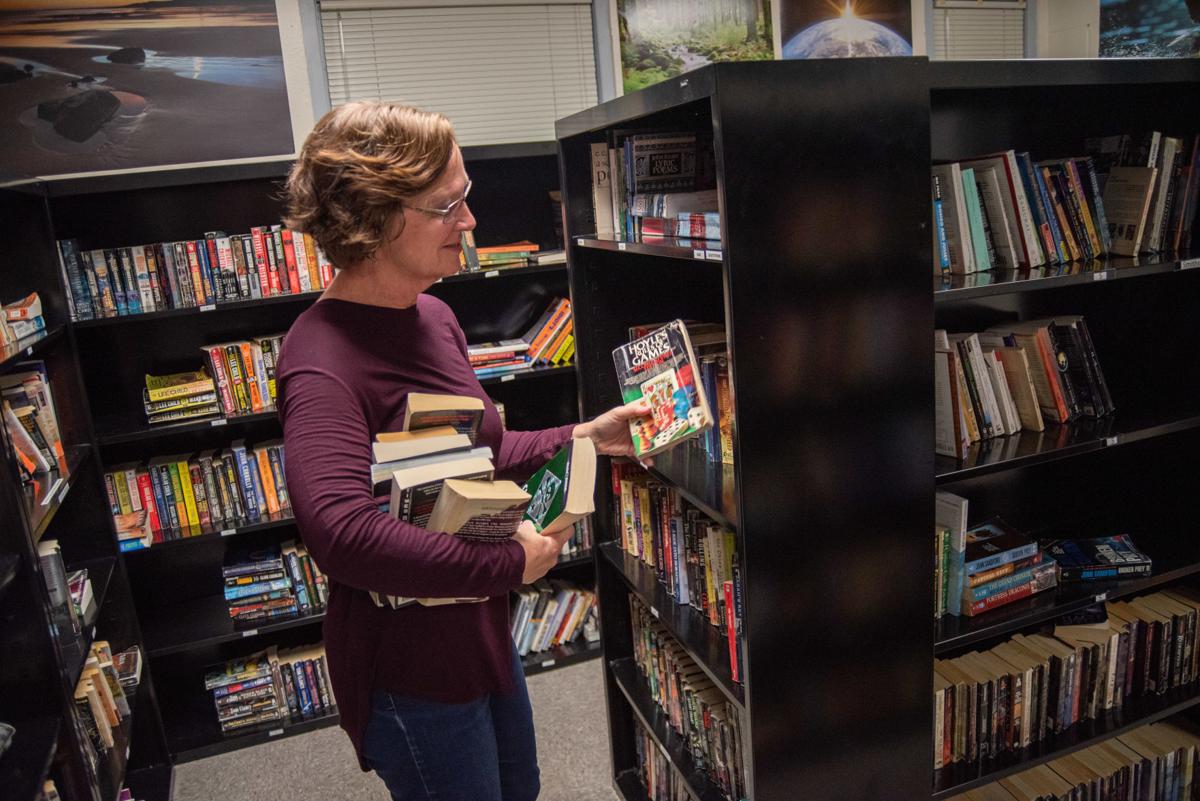 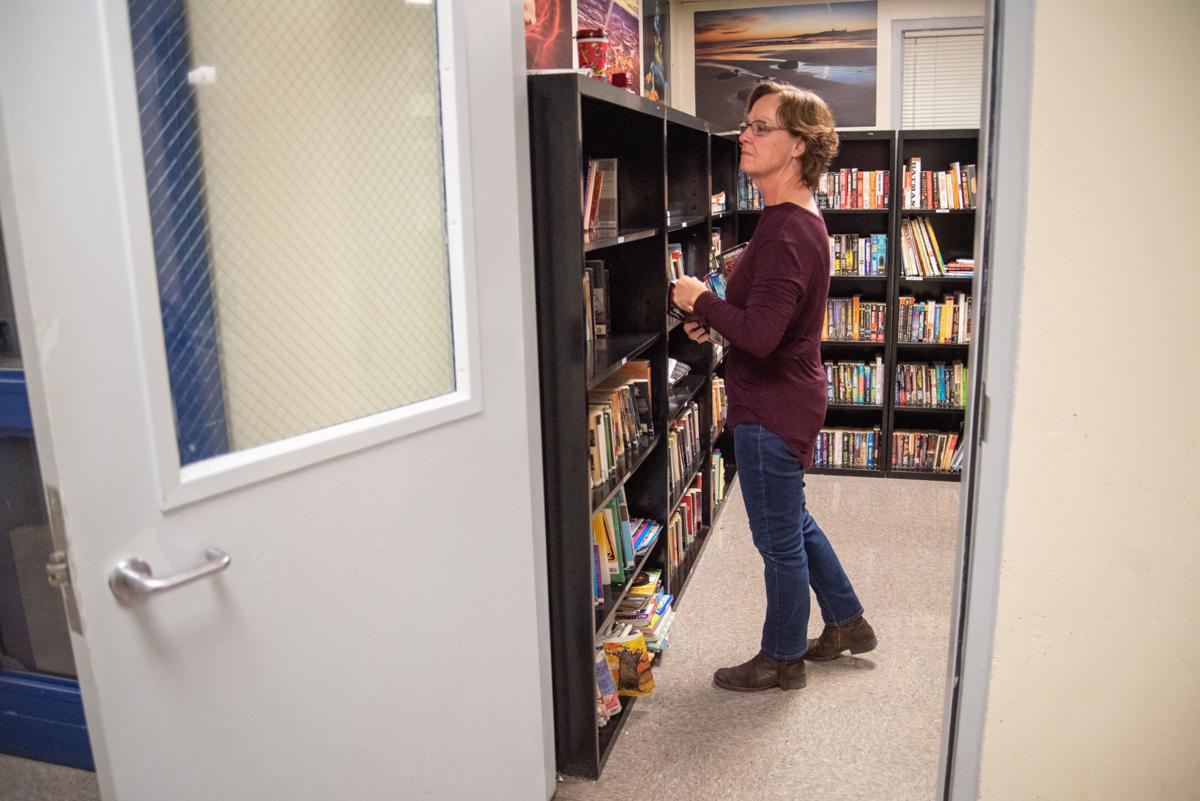 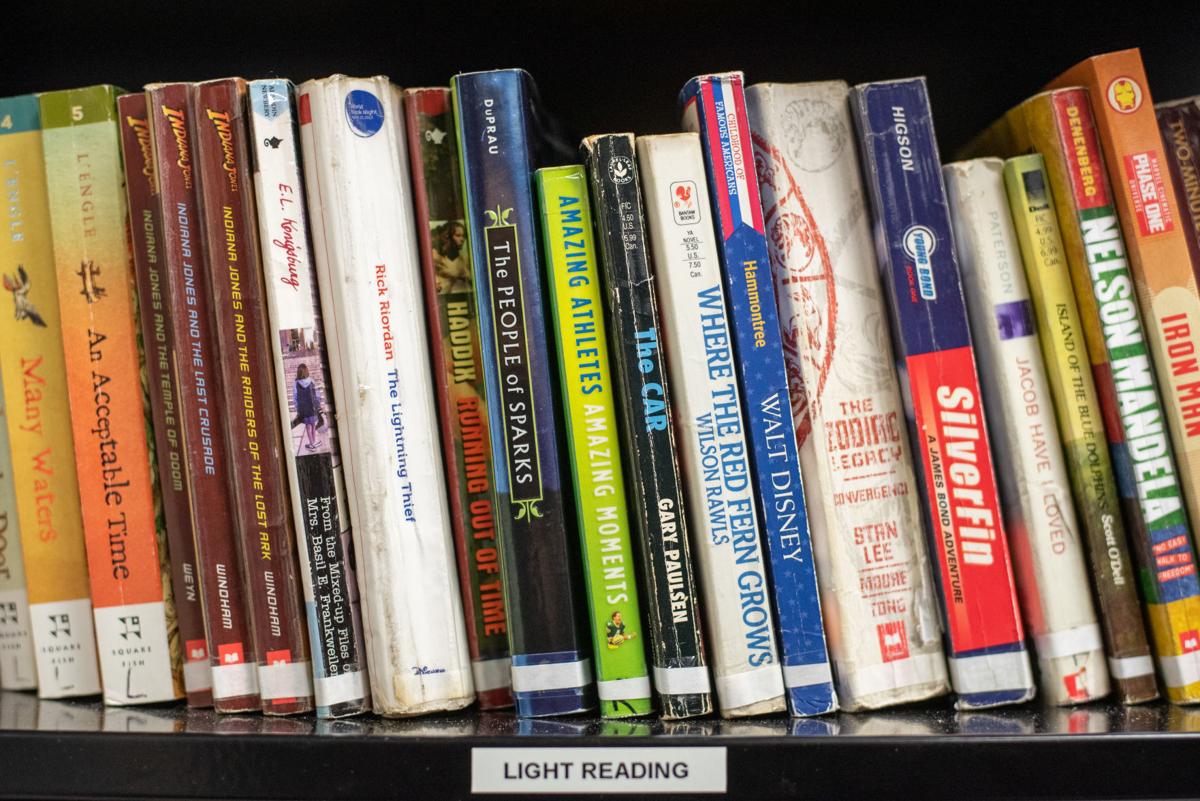 Kathy Pauls has created sections for certain types of books to make it easy for inmates to pick out books.

Riley County Jail librarian Kathy Pauls stands inside of the library. Pauls, a former elementary school teacher, said she began volunteering once a week at the jail about five years ago. It was a way for her to continue her passion for education.

Riley County Jail librarian, Kathy Paul, stands in the entrance to the library.

Capt. Derek Woods, jail commander, opens up the Riley County Jail Library with a key so Kathy Pauls can add donated books to the shelves.

Kathy Pauls has created sections for certain types of books to make it easy for inmates to pick out books.

Though Kathy Pauls no longer works as an elementary school teacher, her passion for education and reading has never diminished. Now, though, she shares that knowledge and enthusiasm with inmates at the Riley County Jail.

Pauls, 58, of Manhattan, volunteers regularly at the jail as its librarian.

Once a week, Pauls visits the jail to organize the shelves, trade in new books and help inmates find books they’re looking for. The work is a family effort, as well. Her eldest son also assists with those tasks on a monthly basis. Her daughter helped create an organization system, and she also recommends trending books or authors to add.

Pauls began working at the jail about five years ago after a church friend, Riley County Police Department’s jail commander at the time, let her tour the library and she asked if she could be its librarian.

Interim Jail Commander Capt. Derek Woods said inmates check out and return a couple books once a week — twice a week if they’re avid readers. He said officers used to straighten up the library, but there was no “rhyme or reason” to the shelves, and Pauls gave the library a purpose when she arrived.

“(Kathy brings) a different aspect since she’s not a police officer,” Woods said. “She brings a mom feel to it. She has not once cared what an inmate is charged with. She’s always cared for who the person was and what they were interested in reading, and that’s always been key to her. She has a caring, compassionate voice when she talks to them, and they just want to open up and request things, so that’s helped move the library along.”

Pauls said it’s important to interact with the inmates because sometimes they request books she would’ve never thought of including.

The books are provided entirely by donations.

“It’s just fascinating the things that they ask for that I don’t think about like mythology, poetry, a book on chess or a book on card games,” Pauls said.

“Lately, some of them are trying to learn Spanish, so I’m doing the very easy learning Spanish books. (Narcotics Anonymous) is one I’m looking for, so it’s always something new. I’m all for education.”

Pauls said they also ask for self-help books, like ones on anger or money management. She said she’s heard stories of former inmates being inspired to continue reading.

“I’ve had the lady at this used bookstore tell me that at least two people have come in and said that they got hooked on reading in jail, and they were at her store buying their favorite author,” Pauls said. “If you start reading, it just has to help you educationally.”

Pauls said one of the things she’s tried to do is destigmatize lower level reading, so she started an easy reader program. She added graphic novels, comics, picture books, workbooks and more.

There is a section with fifth- to sixth-grade-level titles, and Pauls more recently added third and fourth grade levels to the mix. She said she tells all people, no matter what their reading level is, not to discount the books in those sections because there are interesting themes or topics that can appeal to anyone.

Pauls said while she didn’t quite expect to see herself volunteering at a jail, it wasn’t a stretch because she also started a library at her church, Faith Evangelical Free Church.

Pauls taught third and fourth grade in Kansas City and Wichita schools but quit after her children were born. The family moved to Manhattan about 26 years ago when Pauls’ husband received a job in town.

Pauls said while she appreciates the community’s generosity, the library is not large enough to take everyone’s donations.

She said the jail has an account at the Dusty Bookshelf, so interested people can take their donations there and let staff know they are making a donation toward the jail. The bookstore will add credit to the account, so Pauls can purchase specific books as needed. Manhattan Public Library has also shared its donations with the jail.

Woods said volunteers like Pauls, who help with things like recreational, educational, and religious services, all play a part in helping inmates succeed after getting out of jail.

Pauls said she hopes to make any impact she can in helping others.

“God wants us to show our love and his love to the world,” Pauls said. “I do this for that reason. I think we’re all supposed to try to make the world a better place.”