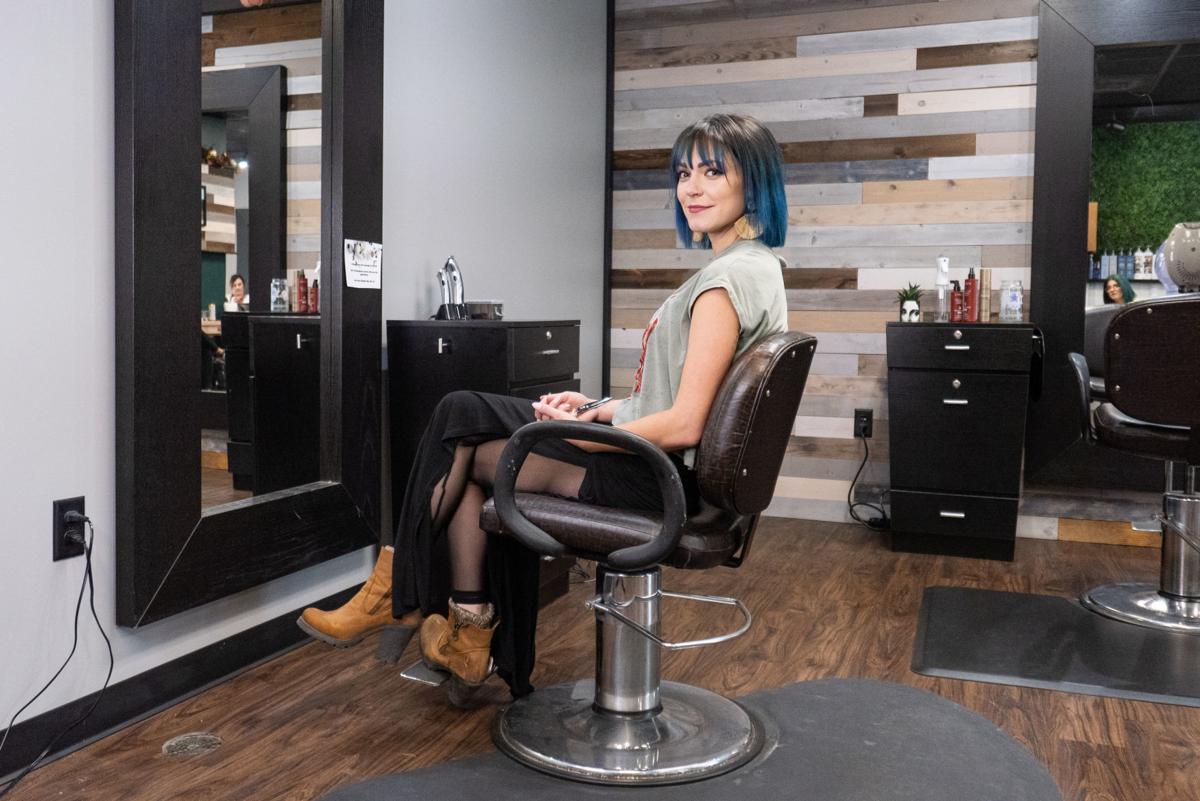 Krisanne Reyerson sits in her chair that she cuts her clients’ hair in at Canvas Salon Studio. Reyerson opened her own salon in July after nine years as a hairstylist. 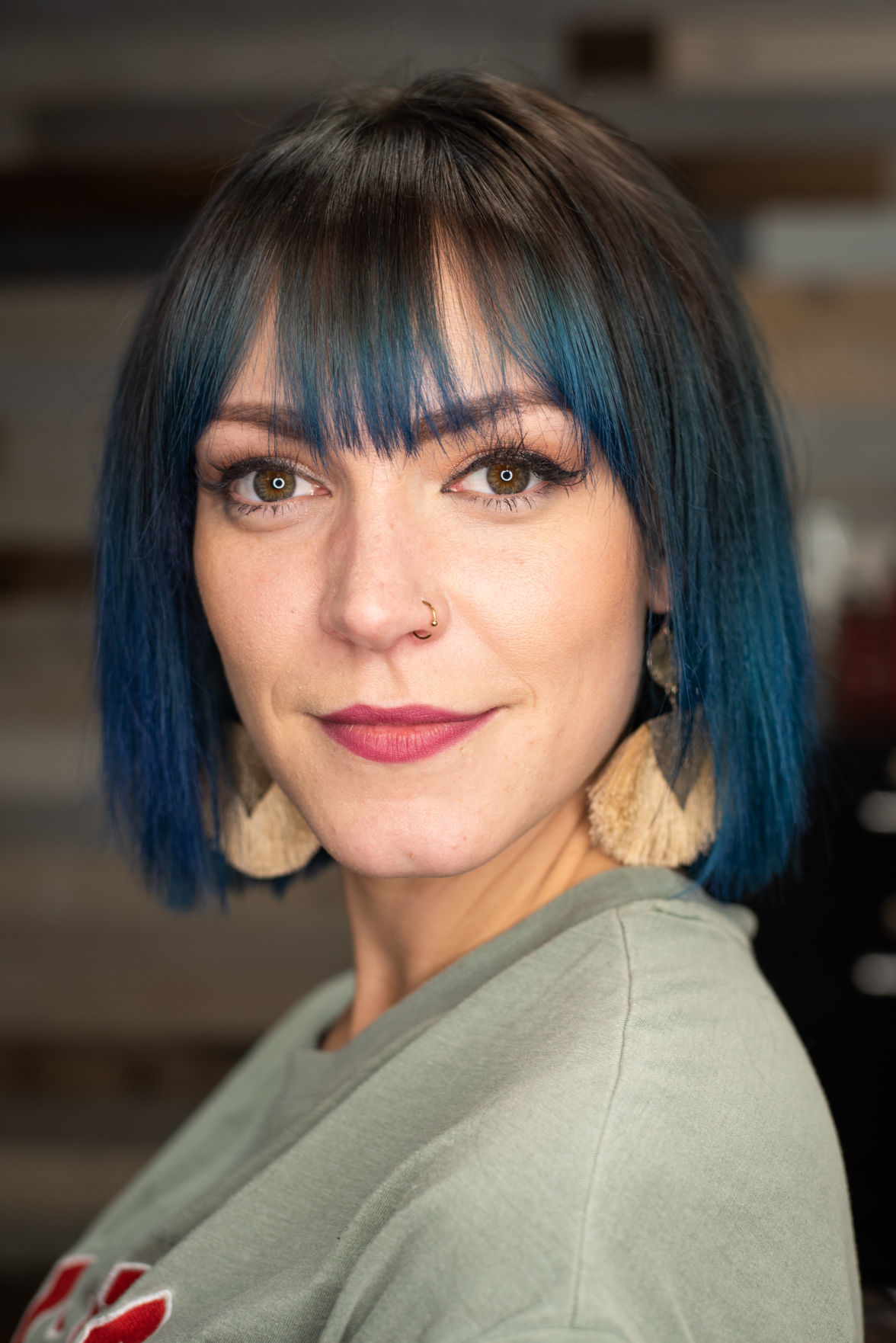 Krisanne Reyerson opened her own business, Canvas Salon Studio, in July after nine years as a hairstylist. After nine weeks in business, Reyerson is already planning to expand her salon. 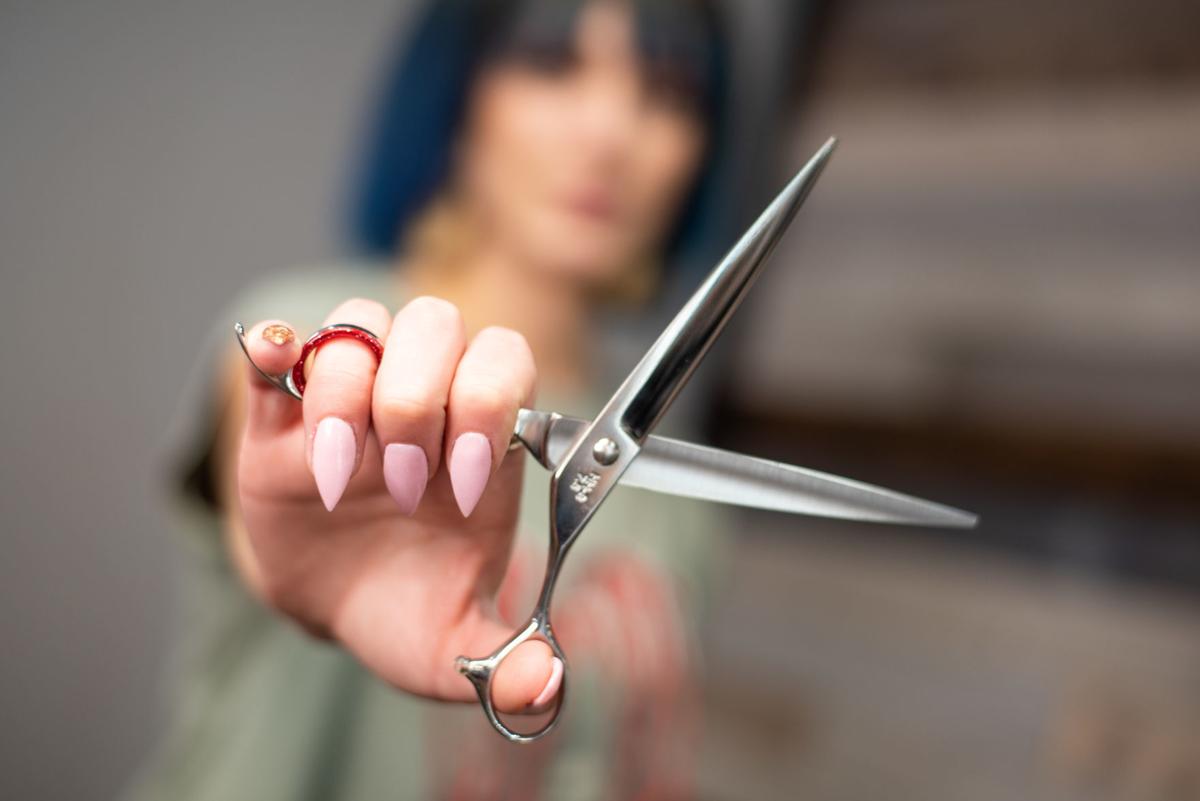 Reyerson said her creative side drew her to becoming a hairstylist. “The ability to influence someone’s self confidence is a really powerful thing,” she said. 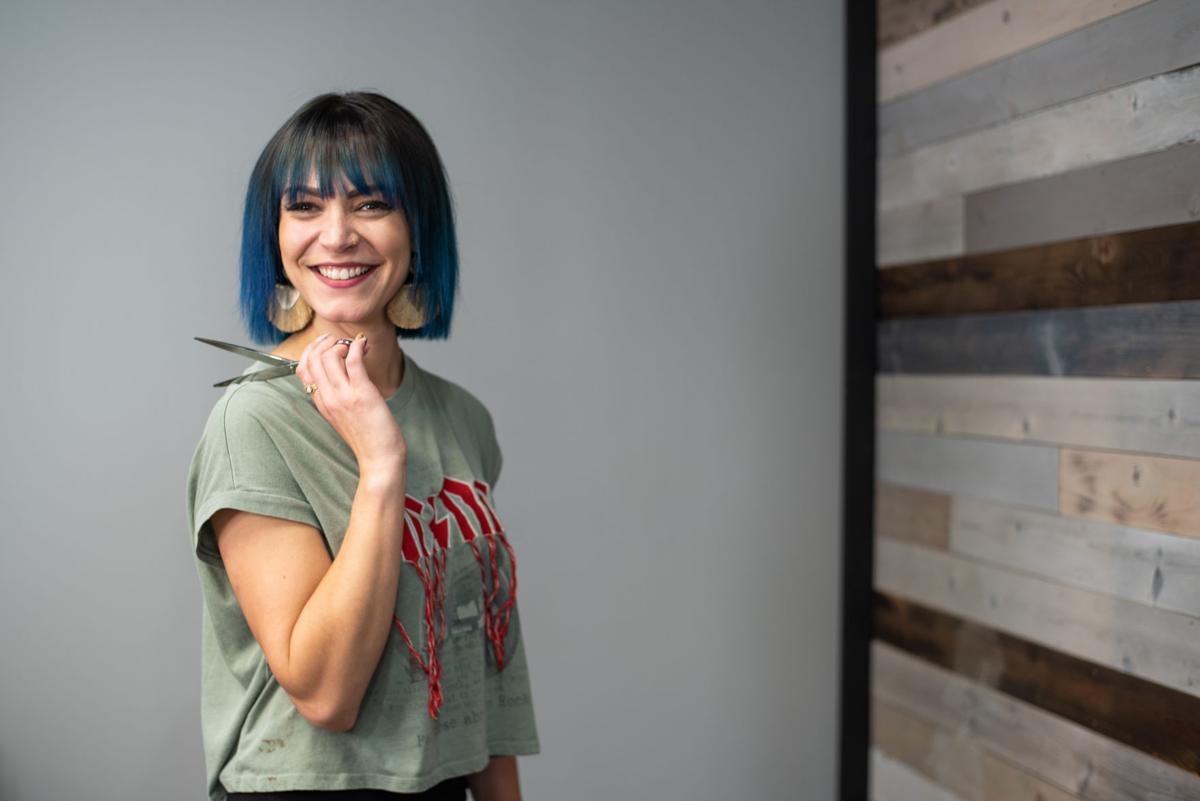 Krisanne Reyerson stands along the back wall at Canvas Salon Studio while holding hair cutting shears.

Krisanne Reyerson sits in her chair that she cuts her clients’ hair in at Canvas Salon Studio. Reyerson opened her own salon in July after nine years as a hairstylist.

Krisanne Reyerson opened her own business, Canvas Salon Studio, in July after nine years as a hairstylist. After nine weeks in business, Reyerson is already planning to expand her salon.

Reyerson said her creative side drew her to becoming a hairstylist. “The ability to influence someone’s self confidence is a really powerful thing,” she said.

Krisanne Reyerson stands along the back wall at Canvas Salon Studio while holding hair cutting shears.

Having a satisfied client walk out of her salon with mermaid hair — a dye job with shocks of deep blues, bold greens and vibrant purple hues — is one of Krisanne Reyerson’s favorite things.

Reyerson, 28, of Manhattan opened her own salon, Canvas Salon Studio in Wildcat Landing at 1800 Claflin Road Suite 110, in late July after about nine years of working at other establishments around town and in North Dakota, her home state.

Reyerson attended and graduated from The Salon Professional Academy in Fargo, North Dakota. She worked at a salon there for about two years and later moved to Manhattan to join her family and get a fresh start.

“Definitely the more creative side (drew me to doing hair),” she said. “The ability to influence someone’s self confidence is a really powerful thing.”

Reyerson said she didn’t always want to own her own business, but learned over the years how she wanted to run things.

“Both of my parents own businesses, and growing up, I said I never wanted to own my business because I saw the hardships, and I wanted a steady paycheck,” Reyerson said. “But with cosmetology, there is no such thing as a steady paycheck even if you’re not the owner. You can’t count on always having your books full, and then working in other salons, I saw how I liked things done and how I didn’t like things done. I wanted to be the person making the decisions in creating my own culture.”

The culture she wants to foster is one of artists and creative minds, she said. Reyerson said the stylists at the salon, friends she’d made during her career, view people as canvases, hence the inspiration for the business’ name.

Onna Rinzler, one of the Canvas hairstylists, said she had followed Reyerson to other salons before and saw her as a mentor, so joining her new team was not even a question.

“It’s been really great working for a leader who believes in the growth of everyone as an individual as much as in the salon,” she said. “She is our beaming light into the future. … It’s not just you coming in, getting your hair done and that’s it. It’s the atmosphere, too. She’s very inviting and welcoming to everybody.”

When Reyerson first started exploring the idea of opening a salon, there was always some aspect that didn’t work out. But within the last year, things seemed to fall into place. The salon owner of A Cut Above told Reyeron that she was stepping back and the space in Wildcat Landing was available.

Now, after about nine weeks of being open, Reyerson said the salon is already looking to expand. Currently, Canvas has just one room to perform treatments like waxing and massages, and Reyerson said they’ve had to turn people away because of its limits. With an open space directly above the salon, an aesthetician wanting to rent a work booth with her, another friend offering to furnish the space and a deal on the lease, Reyerson said she couldn’t turn down the opportunity.

“It’s crazy, but I think I would be stupid to ignore all the signs and the people that have been put in my path to make it happen,” Reyerson said. “I don’t want to regret not doing it.”

Cosmetology is not an easy industry, Reyerson said, because you have to be fueled by passion to get through the first few years out of school while building a clientele. But over the course of her career, Reyerson said she has been able to use her passion and artistic expression to help build a culture that caters to the bold fashion-color loving crowd as well as those who just want a refreshed look.

“Doing bright and bold things is not, especially in Manhattan, something you see a lot of,” Reyerson said. “I think it’s here, but we just need to pull them out of the woodwork. So I think (Canvas) is definitely geared toward a more creative and outgoing person, but we accept everybody. We’re all individuals, and I think we’re about attracting people that aren’t scared to be an individual and who they really are.”

While she’s tried just about every hair color in the rainbow on herself, Reyerson said there has only been one she’s regretted.

“Before I started hair school, there was a ‘Vogue’ cover that had Kate Winslet on it, and she had this icy-white, silver hair,” she said. “I convinced myself we had the same skin tone, which FYI, we do not.”

Reyerson said her friend who worked at a salon agreed to do her hair, but the pair ended up with unfortunate results.

“We bleached my hair four times in two weeks — don’t ever do that,” Reyerson said. “The last time we did it, she’s rinsing it out and she’s like, ‘Umm ... Krisanne, it’s not good.’ … She puts her hand in front of me, and there’s a giant ball of white cotton fluff. I got a chemical haircut that day. My hair was like 2 inches long all over my head. I looked like a freaking Q-tip. It was so bad, and I will forever remember it because my sister got married that summer and it’s memorialized in all of those photographs.”

When she’s not managing the salon, Reyerson said she’s wrangling her four chickens, three dogs and 2-year-old son at home.

“My whole life is kind of hectic, and it’s going to stay that way because I’m adding 1,300 square feet to the salon, but it’s good,” Reyerson said. “I have such a good support system between the girls at the salon, my fiancé and family. I’m really truly freaking lucky.”