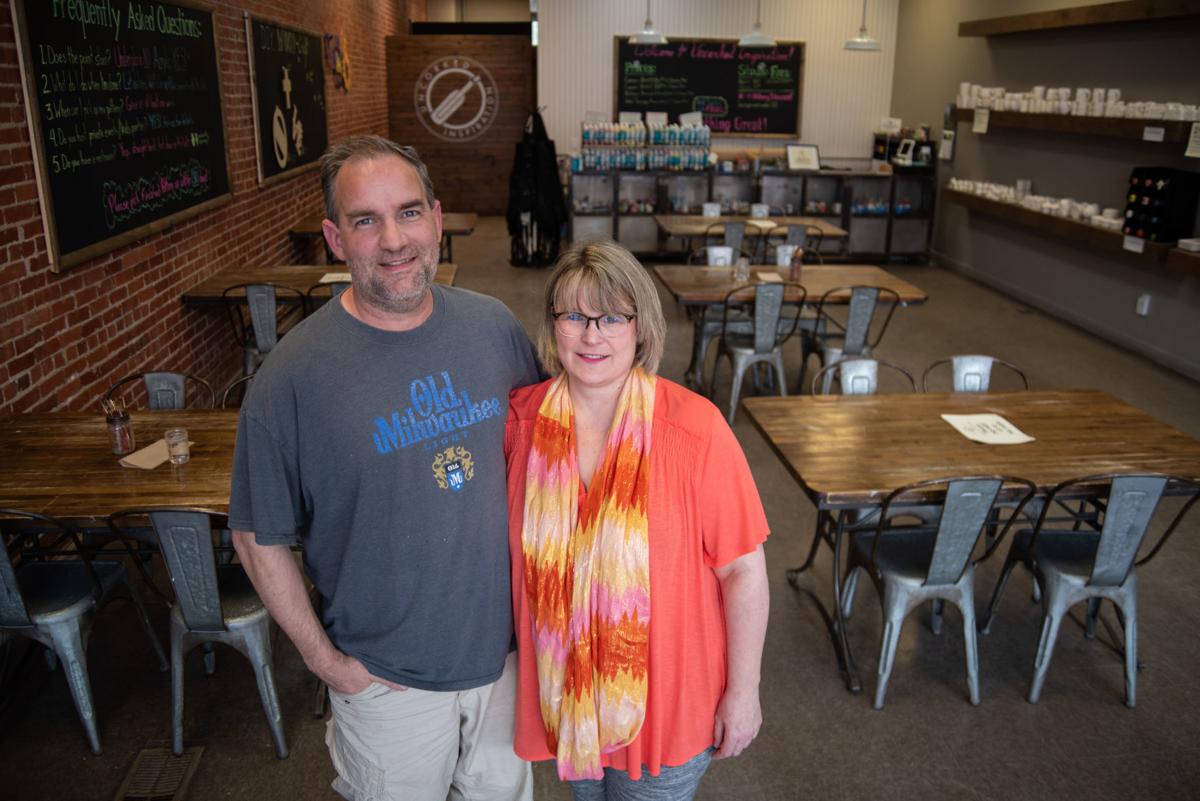 Andrea and Neal Wollenberg stand inside their business in Aggieville, Uncorked Inspiration. 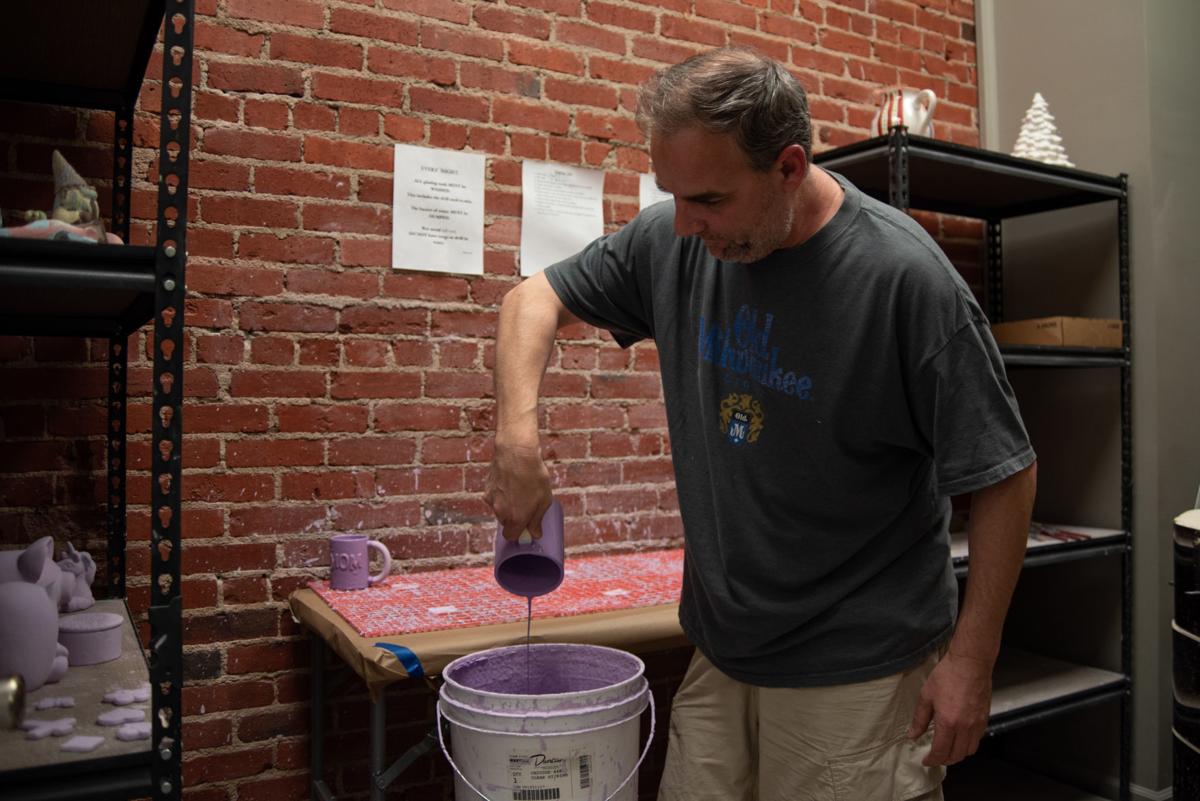 Neal Wollenberg glazes mugs at Uncorked Inspiration, which he owns with his wife. 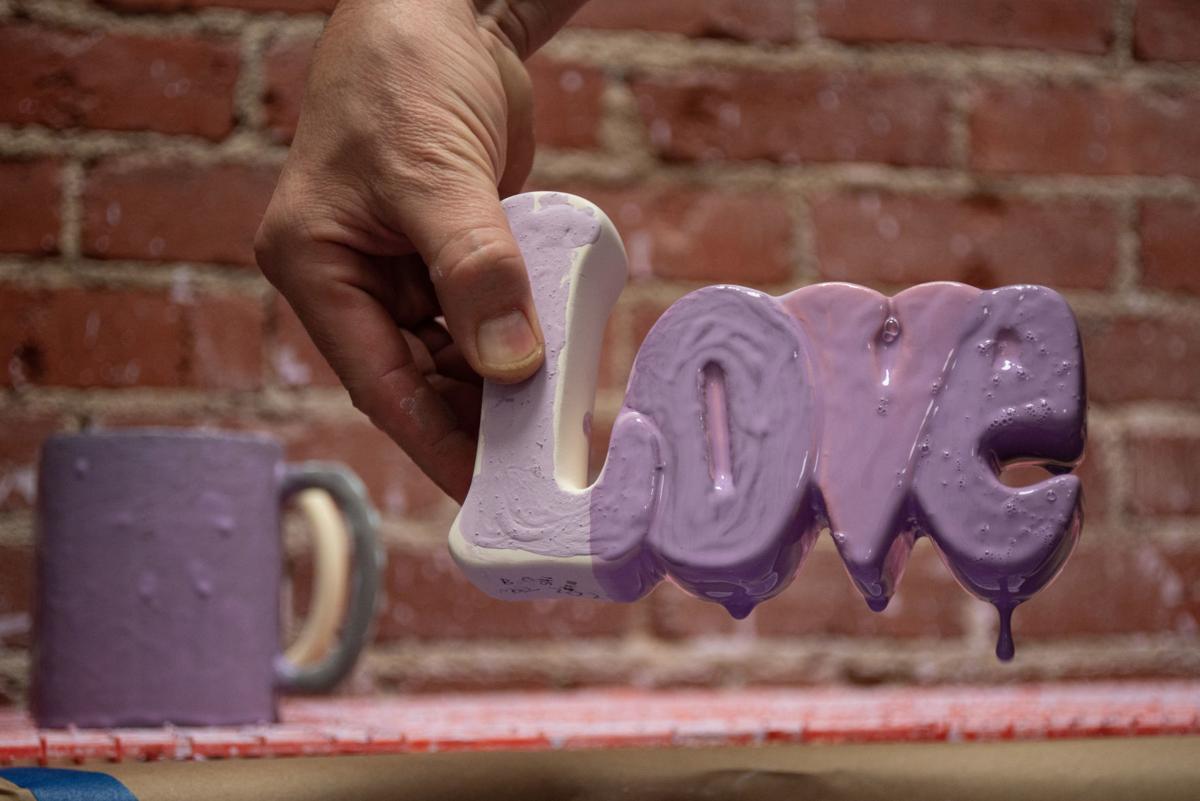 Wollenberg glazes a piece of pottery that reads “Love.”

Andrea and Neal Wollenberg stand inside their business in Aggieville, Uncorked Inspiration.

Neal Wollenberg glazes mugs at Uncorked Inspiration, which he owns with his wife.

Wollenberg glazes a piece of pottery that reads “Love.”

Using Neal Wollenberg’s prowess in fine arts and Andrea Wollenberg’s affinity for numbers, running an art-based studio almost seemed like a no-brainer for the Manhattan couple.

Forty-eight-year-old Neal, a web coordinator for K-State, and 50-year-old Andrea, a librarian at Northview Elementary, own Uncorked Inspiration Creative Studio on Moro Street after buying the former Straight Upp space in November.

Neal said he became interested in music and art at a young age. While attending K-State, Neal said he changed his focus a few times from engineering and music education before he settled into graphic design, drawing and illustration. He later went on to get a master’s degree in visual communications as well.

However, Neal still dabbles with music — playing instruments ranging from trombone and guitars to the bass and some piano — often performing in his church’s musical praise teams.

Andrea grew up in South Dakota, attending Augustana University in Sioux Falls. She earned a bachelor’s degree in English and secondary education and then a master’s in secondary language arts.

Neal and Andrea eventually met online and married in 2006.

The couple first thought of hosting paint-and-sip sessions, where guests can bring in alcoholic beverages while following along to a painting tutorial or instructor, while they were looking for something to do on their shared birthday. After taking a class, Neal said he could imagine himself hosting one too, so the couple purchased some start-up art supplies and began holding pop-up sessions in 2015. Neal said holding mobile pop-ups was a bit difficult to maintain because of having to haul supplies to several locations, so the Wollenbergs took about a year break while they sold painted rocks at craft shows.

They began holding classes again after renting some space through Iron Clad Coworking and eventually found their own place on Fourth Street. When Neal saw Straight Upp Creative Studio was being sold, he saw it as another opportunity to grow.

Andrea said she had some reservations at first because she knew they’d still be managing their full-time jobs, but Neal said he managed to convince her to take a chance.

“We felt like we were jumping into the deep end, treading water,” Neal said.”We’d never experienced employees before because it was always just her and me.”

Having more space has definitely expanded what the couple has been able to do before, Neal said. The paint-and-sip sessions can be larger, they’ve taken over ceramic painting, and at some point, they will be able to offer custom molds for ceramics.

Neal and Andrea said business had been growing since they moved to Aggiville and March was supposed to be one of their busiest yet with booked parties. However, the coronavirus pandemic upended those plans.

While they were closed for a few weeks, Uncorked Inspiration began offering take-home painting and ceramic kits, which they still have as an option for customers. Neal said they’ll likely continue offering them even after the coronavirus has subsided as they’ve found it’s more convenient for some people.

“That was one of the first things we pivoted on… we had to change from being such a social outlet to saying ‘We’re still going to provide this outlet to you so you can do it at home,” Neal said.

Andrea said though the couple does butt heads at times, like any business partners would, she and Neal complement each other’s work styles.

“We’re super yin and yang,” Neal said. “(Andrea) loves doing the business side and she enjoys the books. Whereas I am very much the creative out there person … I couldn’t imagine running it with anyone else honestly. She helps keep me grounded.”

Though he co-owns a larger space, Neal said he still likes to lead the painting sessions when he can because he enjoys being a part of the creative process and teaching techniques.

“Oddly enough people are always surprised, they’re like, ‘I can’t believe I was actually able to paint this,’” he said. “They come in having never painted before, and they come out with a product that they’re actually happy with. Now at the time they’ve maybe had a few glasses of wine so that may change by the morning, but hey, I never (argue) about it.”

While it may take some time before people return to the studio in the numbers they did before, Andrea said the couple is looking forward to it, with extra sanitary and distancing measures in, of course. The studio had its first paint-and-sip session in months on Sunday.

“It felt good to have people back,” Andrea said.