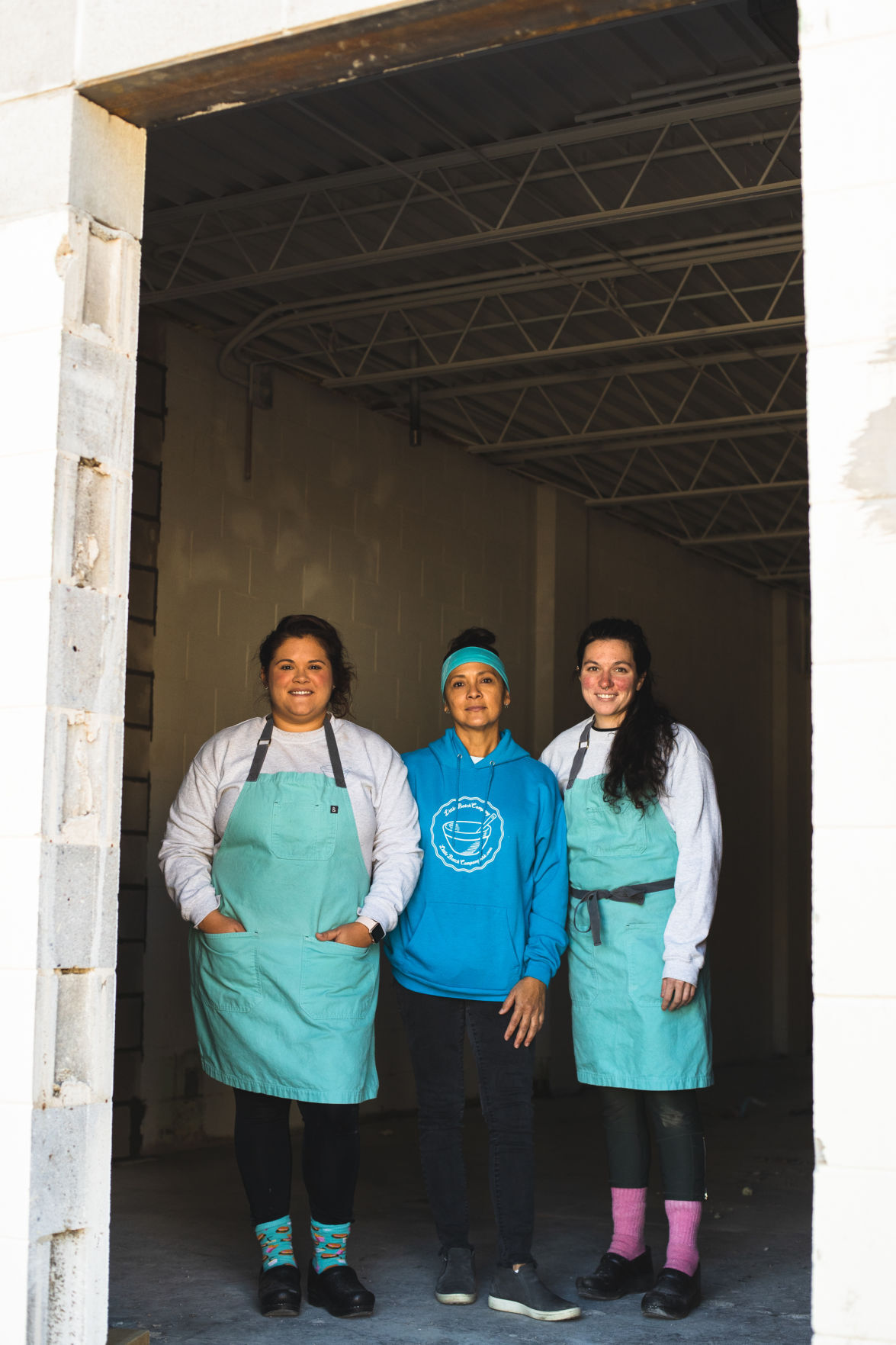 Hannah Pease, left, and her mother, Phyllis Pease, middle, opened Little Batch Company in 2018. The mother-daughter duo are opening a brick-and-mortar bakery and catering site at Poyntz Avenue and 11th Street in December with a restaurant in the former service station to follow. On the right is the latest addition to the team, Rebecca Pensyl, a former coworker of Hannah Pease’s, who brings baking expertise. 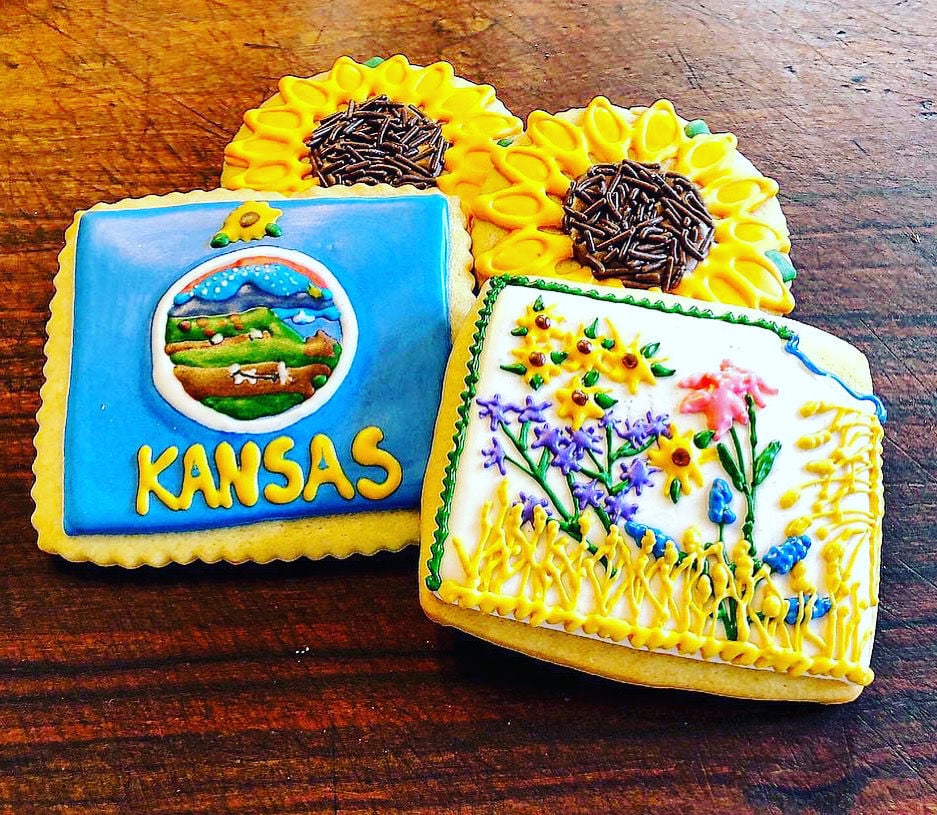 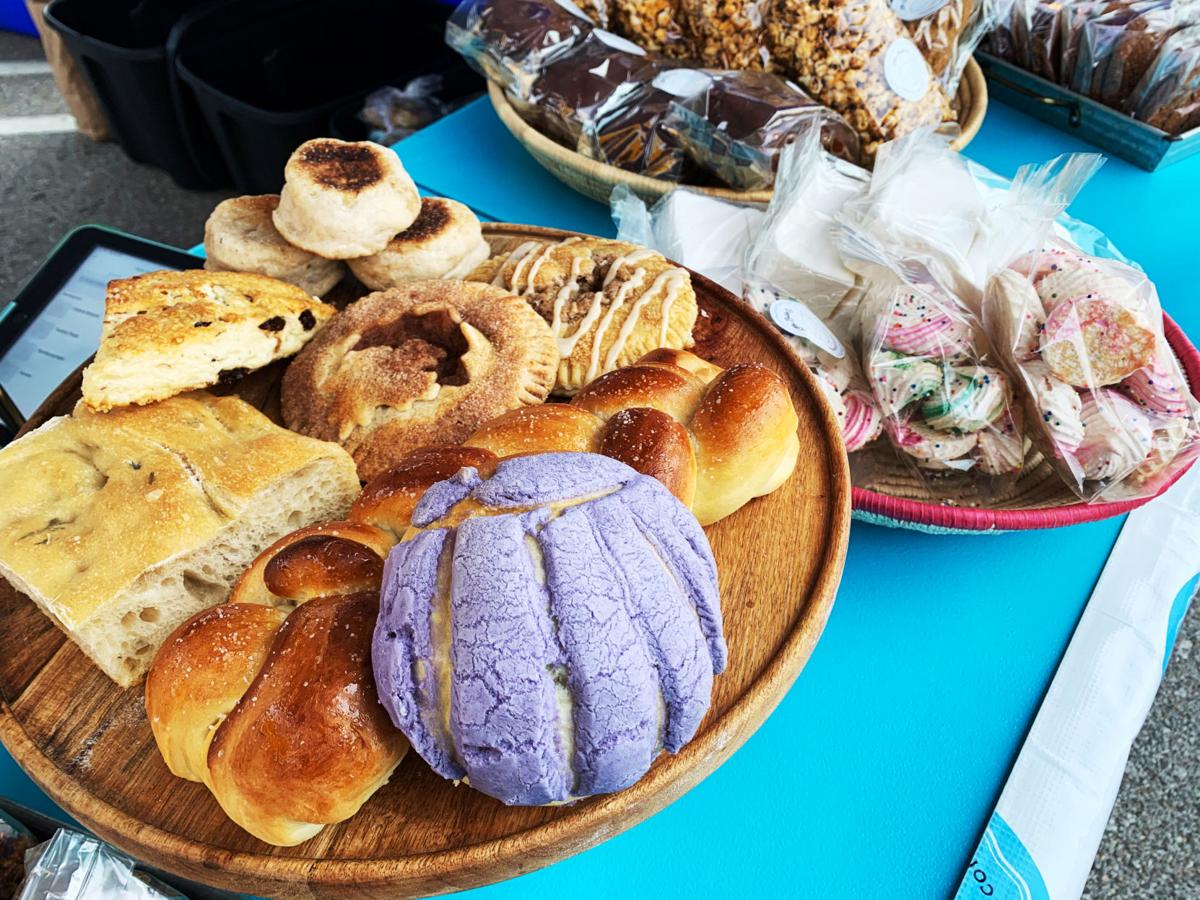 Hannah and Phyllis Pease of Little Batch Co. create a wide variety of baked goods as part of their weekly menu. Their next endeavor is opening a bakery and restaurant on Poyntz Avenue.

Hannah Pease, left, and her mother, Phyllis Pease, middle, opened Little Batch Company in 2018. The mother-daughter duo are opening a brick-and-mortar bakery and catering site at Poyntz Avenue and 11th Street in December with a restaurant in the former service station to follow. On the right is the latest addition to the team, Rebecca Pensyl, a former coworker of Hannah Pease’s, who brings baking expertise.

Hannah and Phyllis Pease of Little Batch Co. create a wide variety of baked goods as part of their weekly menu. Their next endeavor is opening a bakery and restaurant on Poyntz Avenue.

With Phyllis Pease’s background in art, Hannah Pease’s experience in baking, and the pair’s shared fondness for cooking, the mother-daughter duo in 2018 created Little Batch Co., a small baking company.

Phyllis, 56, said she emphasized home-cooked meals for the family, and her daughter Hannah, 30, took a liking to it as well.

“(Hannah) started baking cakes when she was in high school for her teachers,” Phyllis said. “We all like to cook, and we’d have family dinner every night so we were together trying to encourage cooking.”

Hannah began working in restaurants at age 16, first at Rock-a-Belly Deli then Harry’s.

Hannah said she tried traditional college at K-State but found it didn’t suit her, so she continued working at Harry’s full-time while she decided what she truly wanted to do. One of her co-workers eventually convinced her to attend culinary school, and Hannah left for Chicago in 2015 to study at the French Pastry School.

After graduating from the program, Hannah moved to Charleston, South Carolina, to work at two popular restaurants.

“(Charleston) was and still is, rapidly expanding food-wise,” Hannah said. “It’s lots of Southern food, but lots of chefs from New York move there to open places. It’s a huge port city, so there’s different kinds of foods and cultures. It was a lot of fun being there but after working there a few years, I decided I’d rather just vacation there instead of live there.”

Hannah said it was difficult to move up in the industry there because the top chefs had been in their positions for years and likely wouldn’t be going anywhere anytime soon, so she set her sights back on her roots: Manhattan.

Hannah said the Midwest often hops on trends later than other parts of the country, and she wanted to bring them here sooner.

“I was like, ‘I kind of want to do my own thing, (and) I think going back to Manhattan would be perfect because what I wanted to do no one was doing it here,” she said. “I knew from traveling, working in other cities and living in other cities, there’s a whole bunch of untapped food ideas that haven’t made it to Manhattan.”

Phyllis said when Hannah approached her with the idea of starting their own baking company, she was behind it from the start. She said she was in a period of transition herself at the time, and she saw the opportunity as a way to try something new together.

The pair is most likely known for their intricately decorated sugar cookies, though they sell a variety of other goods, including bagels, bread, tortillas and pies, online and at the downtown Farmers Market.

The two said they had been dreaming for some time of setting up a physical location for their bakery, as well as a restaurant. Their hopes came true recently when they were able to buy the property at 1018 and 1026 Poytnz Avenue, the site of an old gas station and office building, earlier this year.

The office building will become the site of their catering business and production bakery and the service station will be their restaurant, Parkside Station (it’s across the street from City Park), and retail space.

The Peases said they wanted to emulate restaurants they’d seen in Austin, Texas, with al fresco dining, outdoor games and a place inside to buy their goods. While the office building will be reserved for production baking only, they said they would like to additionally make it a place to hold baking and cooking classes, inspiring people about food. Hannah said she also convinced one of her friends from Charleston, Rebecca Pensyl, a cake artist, and her husband, a former sous chef, to join their team.

The group expects to be able to move into the baking space by December and the restaurant space sometime around spring.

When that’s done, Phyllis said she has plans to work with local tattoo artist, Matt Goss of Syndicate Tattoo, to paint a mural on the side of the building.

Phyllis said she often brings in the creative, aesthetic ideas for the business while Hannah pulls from her industry experience to make sure the ideas are functional. Phyllis is a lifelong artist who graduated from K-State in graphic design. She works across several different media, both 2-D and 3-D, and has created several pieces in local business, like the portraits in Bluestem Bistro, the mural outside Taco Lucha and the new church-style window in Manhattan Brewing Company.

With the proximity to key areas in town — City Park, Aggieville, schools and downtown — Hannah and Phyllis said they hope businesses like theirs can encourage more foot traffic and support for local businesses. Hannah said a fond memory of hers was walking with her friends to the old Kreem Kup on Yuma Street and eating cheap ice cream cones in Long’s Park, and she’d like to recreate that experience for people, especially for the children who are in school nearby.

“We just hope it’s part of that next generation of good food,” Phyllis said.