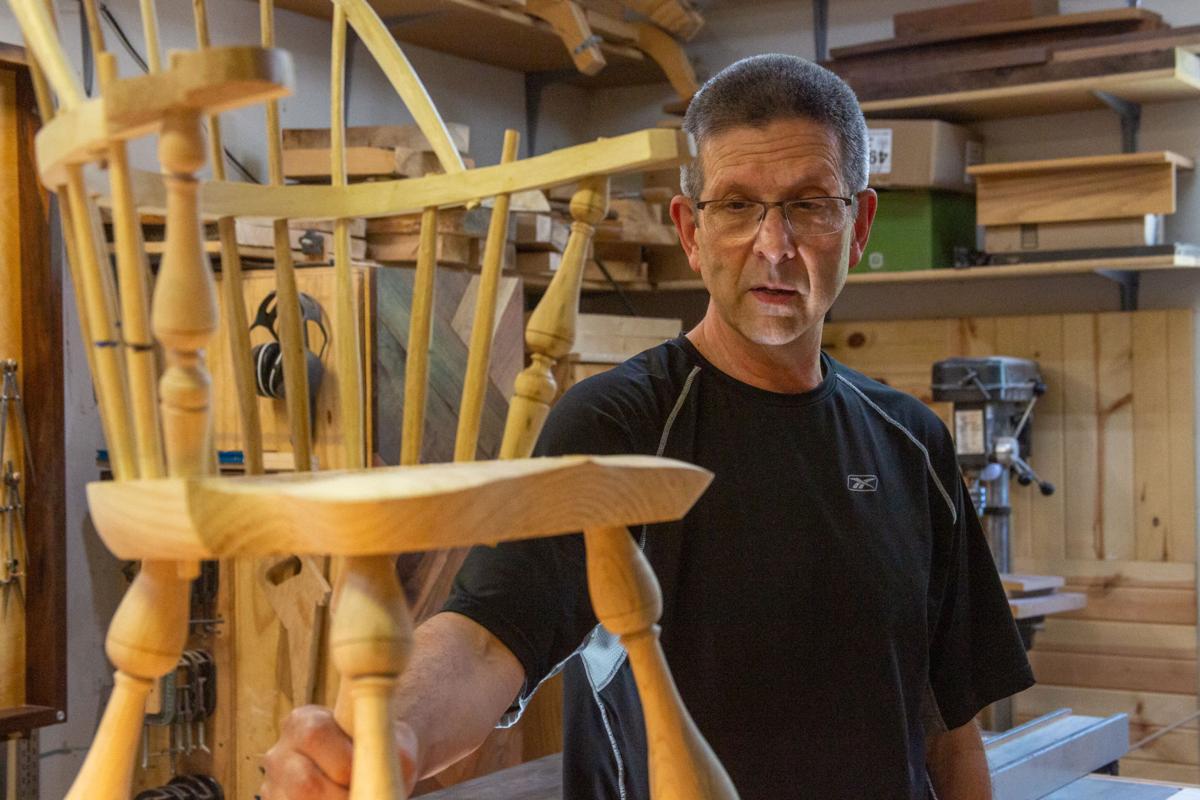 Steve Ratliff works out of his shop making a variety of wood-based projects. Steve Ratliff is the senior pastor for Faith Evangelical Free Church. 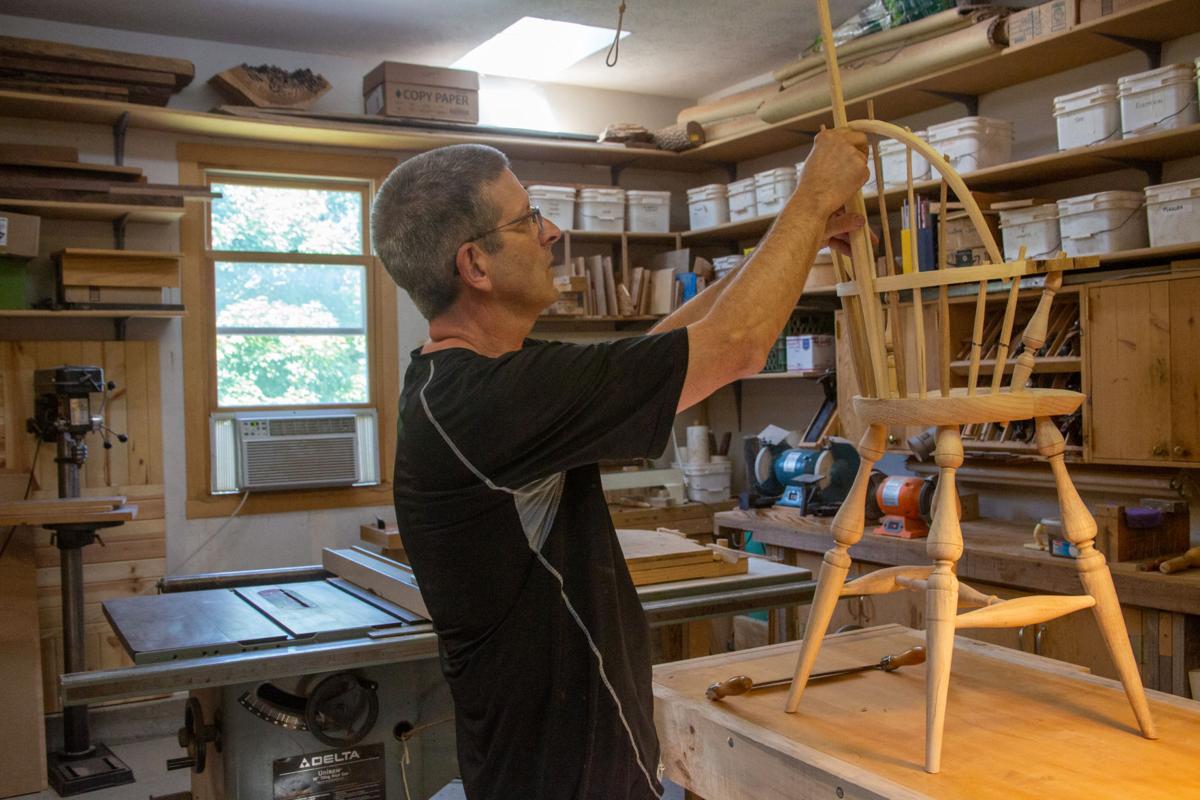 Steve Ratliff works in his shop making a wooden chair. He said during the stay-at-home order he made a cabinet out of scrap wood pieces. 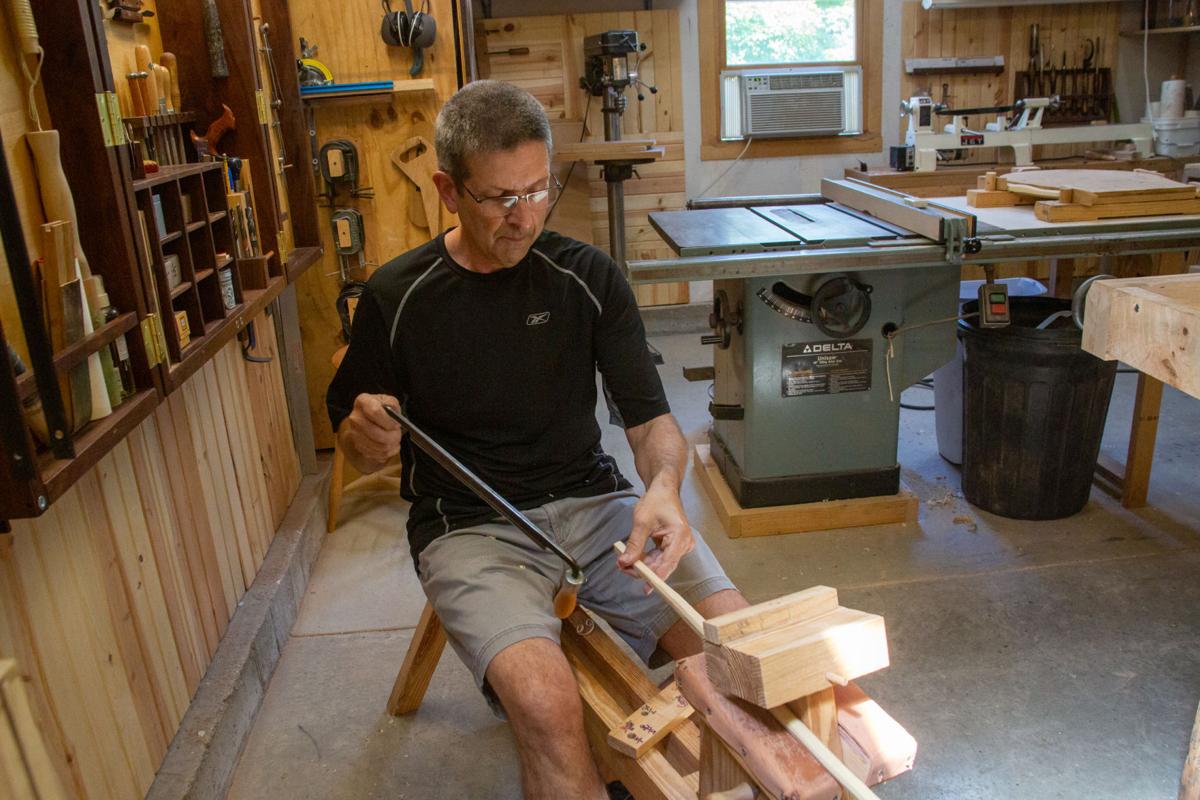 Ratliff works in his shop. He said he likes seeing a project through start to finish.

Steve Ratliff works out of his shop making a variety of wood-based projects. Steve Ratliff is the senior pastor for Faith Evangelical Free Church.

Steve Ratliff works in his shop making a wooden chair. He said during the stay-at-home order he made a cabinet out of scrap wood pieces.

Ratliff works in his shop. He said he likes seeing a project through start to finish.

Steve Ratliff enjoys the accomplishment of seeing a project from start to finish.

“I just find great satisfaction in making things,” he said.

From constructing 52 chairs to bedroom furniture sets to cabinets, Ratliff has completed many projects in his time as a woodworker.

“It’s cheaper than therapy,” Ratliff said about woodworking. “It’s one of the most tangible things I do.”

As a child growing up in Hattiesburg, Mississippi, Ratliff, who is a local pastor, started out by watching his dad work with wood materials.

“He was always just piddling with something in the shop,” Ratliff said.

Ratliff, 61, formally started doing chair making in 2006; it takes 40-50 hours to make one chair, Ratliff said. He said he has sold a few chairs but has given many of his chairs to family members.

He has an affinity for Windsor wooden chairs, which are chairs with a rounded back connected with spindles. These chairs were first made in the early 18th century. He uses hand tools to create the chairs.

“I really got fascinated with Windsor chairs, with the lines and the style of it,” Ratliff said.

One uses three different kinds of wood to make a Windsor chair: hard maple for the legs, northern white pine or eastern pine for the seat and white oak or hackberry for the spindles, Ratliff said.

He calls woodworking a serious hobby of his as he spends 6-10 hours per week on it. He has created both adult and toddler chairs.

Ratliff, who has his own woodworking shop in his home, is a member of the Kansas Quality Woodworkers Association.

His most recent project, which he completed during the stay-at-home order during the coronavirus outbreak, includes a cabinet for his woodworking tools; he created the cabinet with pieces of scrap wood.

Ratliff is the senior pastor for Faith Evangelical Free Church. He became a Christian during his time studying at the University of Southern Mississippi. He later transferred to Louisiana State University and graduated with a degree in physics.

After three years of seminary, he became a pastor at Faith. He has been a pastor at the church in Manhattan since 1988.

His teaching is what makes him such a great pastor, said Paul Scheele, a member of Faith. Scheele said Ratliff is able to apply the scriptures into today’s context.

“He feels for people. He’s a people person,” he said.

Ratliff mentored Scheele when Scheele was a Kansas State University student. Scheele said he was pretty ignorant and cocky as a college student, and Ratliff assisted him in personal growth.

“Something that he can do that also gives back to the community.” he said.

What keeps Ratliff and his family in Manhattan are the people.

“We like the variety of people,” Ratliff said. “You have people from all over the world. In the church, we have tons of kids, we’ve got college students, grown-ups and older people.”

Ratliff met his wife Brenda, who is from Wichita, at a Christian summer camp in Mississippi in 1981. The couple married in 1983 and has three adult children.

Ratliff hopes for “fruitful” years to come for the church.

“We want to be a community of people that really follow Christ,” Ratliff said. “Don’t just do Christian things. ... You can keep busy doing things, but is it really the things that God wants us to do?”