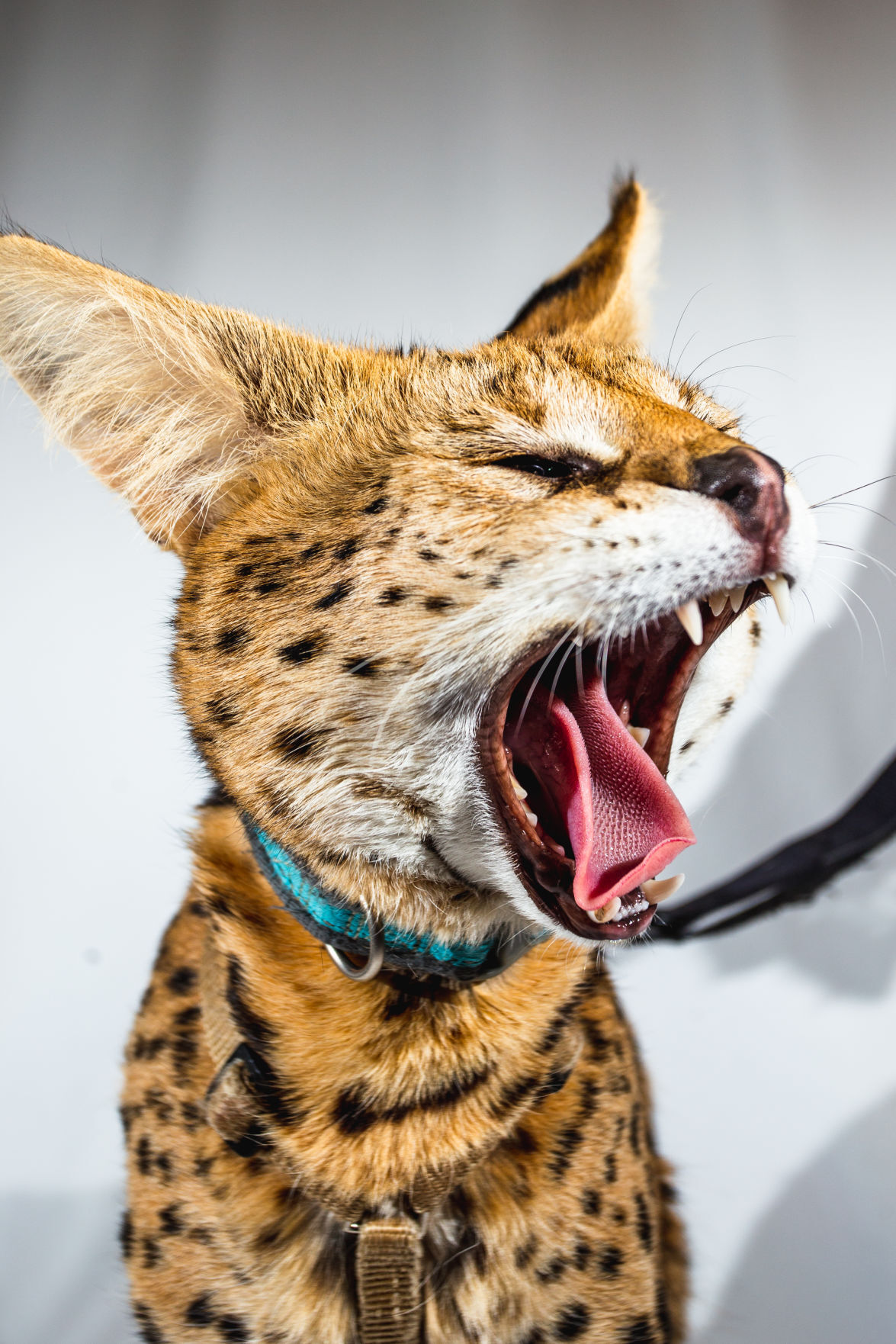 Sir Xerxes Maximus, an African Serval who has a Facebook fan page and calls the town of Green home, reveals his teeth while yawning. The species has a history of serving as domesticated companions dating back to ancient Egypt. Xerxes is not yet two years old and has a life expectancy of around 20 years. 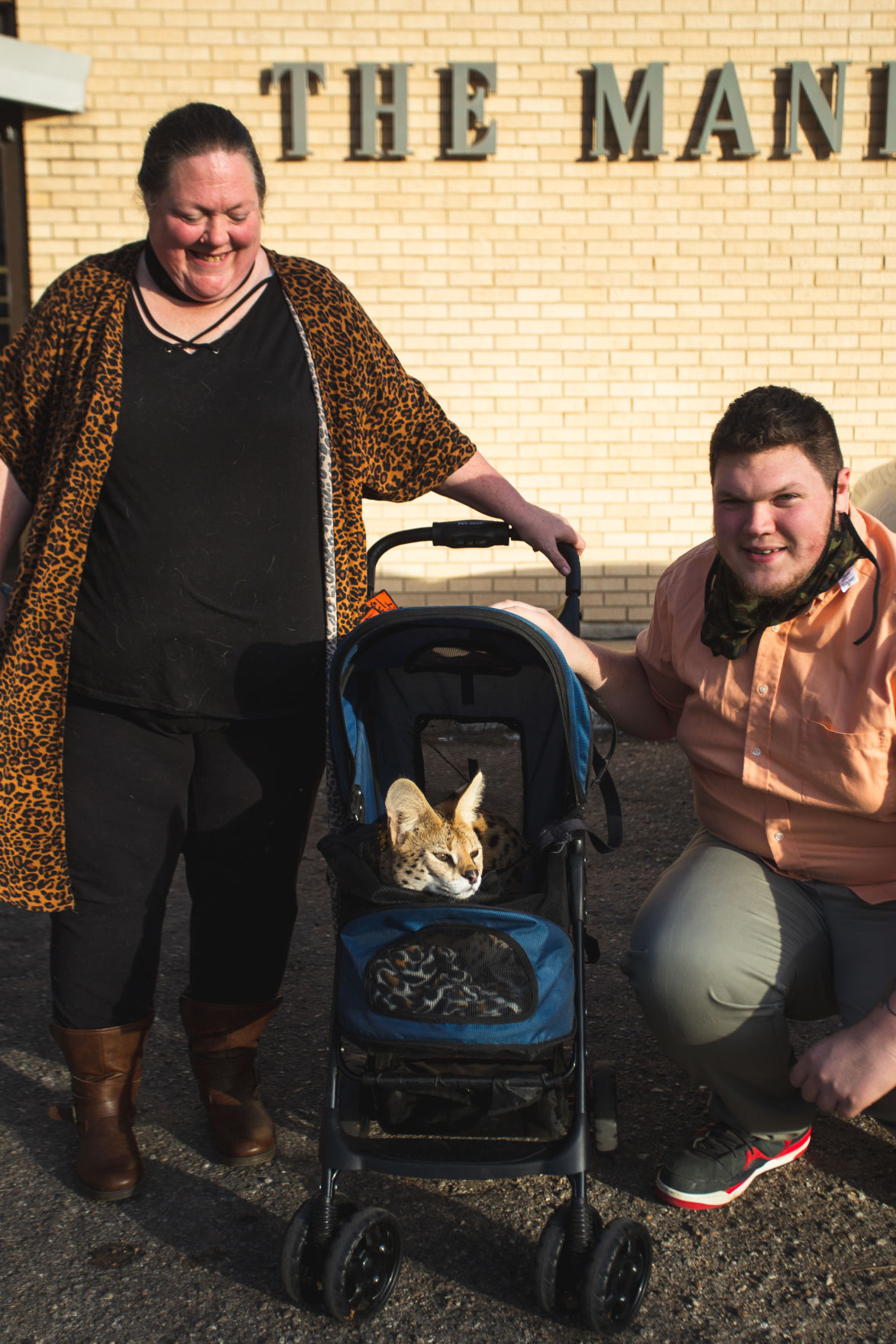 Laura Sibson, left, and Doug Simpson are the proud caretakers of Sir Xerxes Maximus, noting on the cat’s Facebook fan page, “life with him is so much fuller.” The mother-son duo brought Xerxes home when he was just five weeks old and have enjoyed his company ever since. 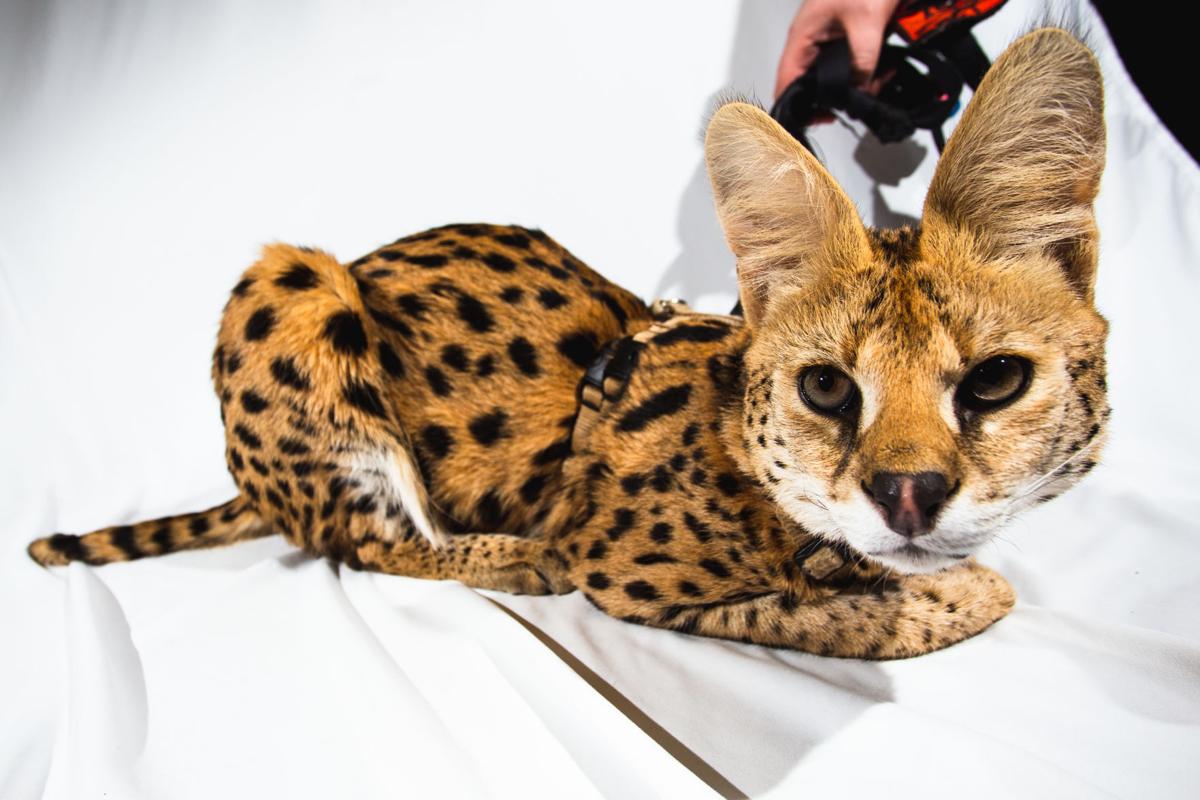 Sir Xerxes Maximus, an African Serval who has a Facebook fan page and calls the town of Green home, reveals his teeth while yawning. The species has a history of serving as domesticated companions dating back to ancient Egypt. Xerxes is not yet two years old and has a life expectancy of around 20 years.

Laura Sibson, left, and Doug Simpson are the proud caretakers of Sir Xerxes Maximus, noting on the cat’s Facebook fan page, “life with him is so much fuller.” The mother-son duo brought Xerxes home when he was just five weeks old and have enjoyed his company ever since.

When Laura Sibson met Sir Xerxes Maximus, she knew she wasn’t done being a mother.

The maternal instincts of love, protection and support washed over her when this exotic cat at five weeks old joined this family’s life in October 2019. “I was not expecting the bond that is there,” Sibson said.

Sir Xerxes Maximus is an African Serval who lives in Green, about 36 miles northwest of Manhattan in Clay County. Born on Sept. 6, 2019, the tan, orange and black-spotted cat lives with Sibson, 47, and Sibson’s son Doug Simpson, 24.

“This is essentially my child,” Simpson said. “While I do have nieces and a nephew, he is the closest thing that I’m ever going to get to a kid. I don’t like the idea of having children on my own.”

Simpson is Xerxes’ legal owner, but Sibson and Xerxes share a particularly special tie, so Sibson is his main caretaker.

Sibson stays at home as a caregiver for her daughter and husband, who are both disabled, while Simpson works at the Clay County Sheriff’s Office.

The family acquired him from S&S Exotic Cats, a breeder in Alpha, Illinois, through obtaining the proper permits to own an exotic cat. Xerxes is very laid back for an African Serval, Simpson said, and that is because of his upbringing.

“When you socialize these cats properly, it is possible for them to be laid back and just be generally overly accepting of people and animals and stuff like that,” Simpson said. “So that’s what we did. Since we brought him home, he has been with us every step of the way.”

Sibson is a former snake breeder, Simpson said, and this background led them to acquiring Xerxes. Xerxes is the family’s first exotic cat, but the family has owned cats, dogs, lizards and snakes in the past.

“We’ve always liked big animals,” Simpson said. “We’ve always had exotic animals in our life. When I grew up, we had snakes and lizards. All kinds of ferocious and misguided animals that people have the tendency to say are dangerous. We just always have had that exotic aspect of our life.”

Because of his upbringing, Xerxes is comfortable around humans. He has never hurt anyone, his owners said, and only has given a few accidental scratches.

Manhattanites may have even seen Xerxes out and about at stores; he often sits in a pet stroller when he is out in public.

“He goes on car rides, he goes to the vet, he goes into stores, like Menard’s and Walmart, with owner’s permission, of course,” Simpson said.

Xerxes even has his own fans and a loyal following on Facebook on his Sir Xerxes Maximus — African Serval page.

“There’s actually a couple of people at Walmart that are probably some of his biggest fans that have gotten to see him grow,” Simpson said.

Sibson and Simpson said that African Servals are not for everyone, though.

“These are not pets, these are companions,” Sibson said. “He is too smart to be a pet. Like I said, I’m the one that’s trained.”

Sunset Zoo director Scott Shoemaker said it is legal to own an African Serval in Kansas, but the zoo does not recommend it.

“We always recommend not getting an exotic (animal) as a pet, but it is legal,” he said.

The cat got his name from the movie 300 with the larger-than-life King Xerxes. His intelligence level is equal to that of a five-year-old human, Simpson said.

At one year and four months old, Sir Xerxes Maximus, at 34 pounds, has a protein-rich diet with rats, quail or chicks.

“He’s talkative,” Simpson said. “He goes to the fridge and you ask him what he wants, he will actually talk to you and tell you what he wants. ... He’ll just sit there and chirp and twitter.”

He won’t stop growing until he is two. Simpson said African Servals can grow up to 55 pounds.

Sir Xerxes Maximus does not use a litter box like your typical house cat. He has two Christmas tree storage totes where he does his business.

“Servals do not pee and poop in the same box,” Simpson said. “They just flat-out don’t like doing it. They have to have two separate boxes.”

Xerxes likes to run around the house and playfully pounce on his owners. Like dogs, Xerxes enjoys playing fetch and playing with light-up balls.

The family has a fenced-in porch for Xerxes to roam around when he goes outside.

He plays with the other cats Simpson and Sibson own — Gunner, a house cat, Piper, a Savannah cat, and Mitsy, an Egyptian Mau cat. Gunner is Xerxes’ best friend, Sibson said.

“It’s something that I never in my lifetime would have thought we would have done,” she said. “I am so thankful that Doug decided to do it.”