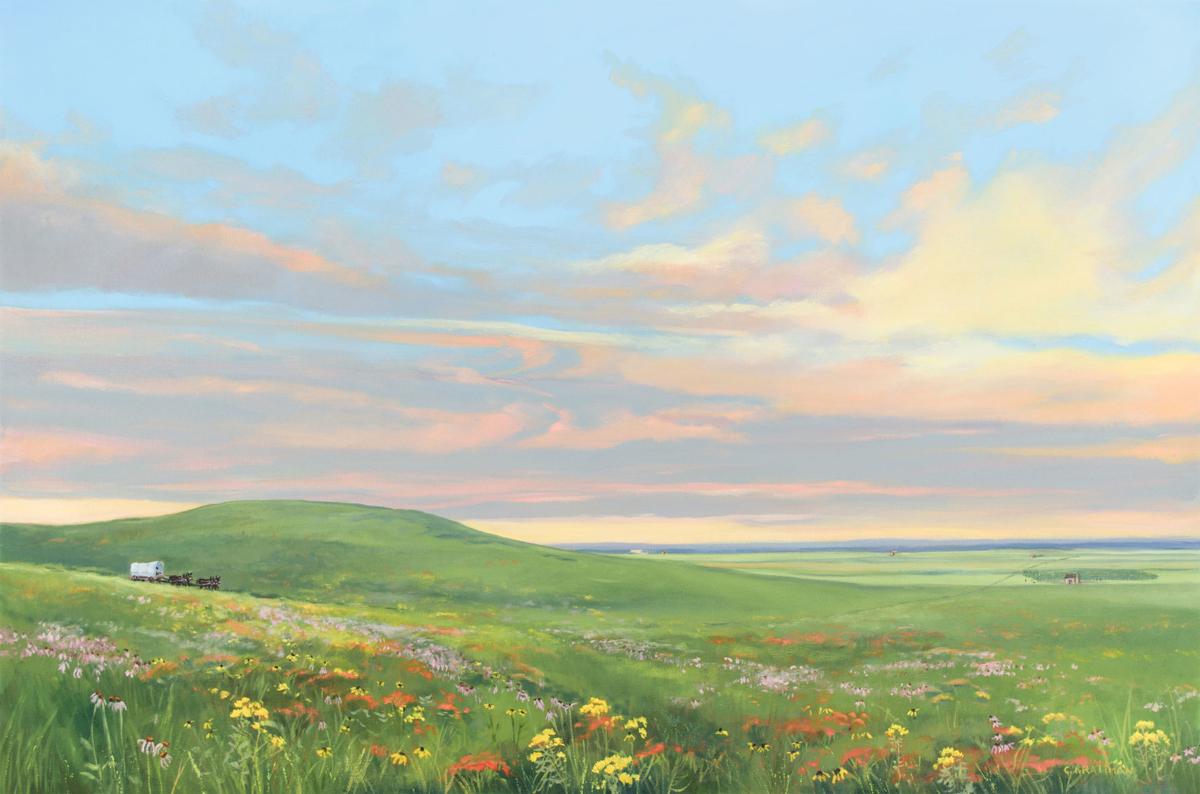 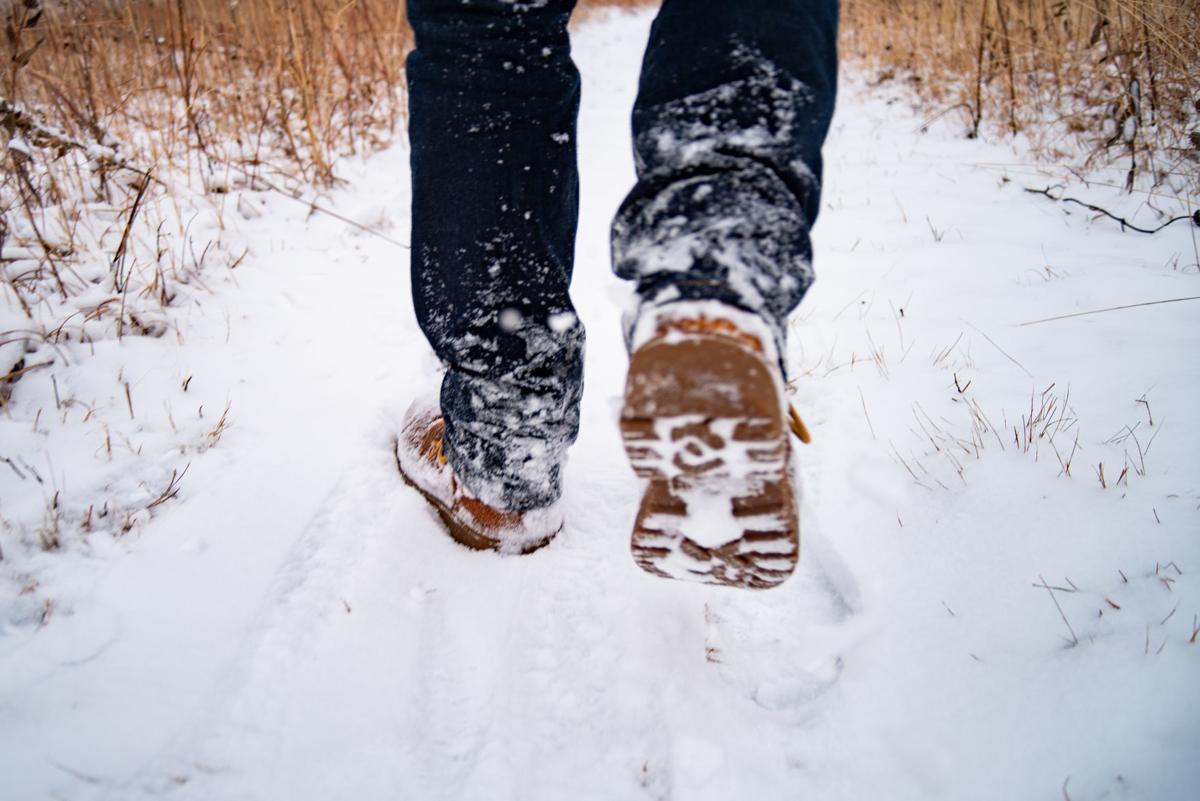 Rafael Garcia walks up the historic trail to Mount Mitchell. 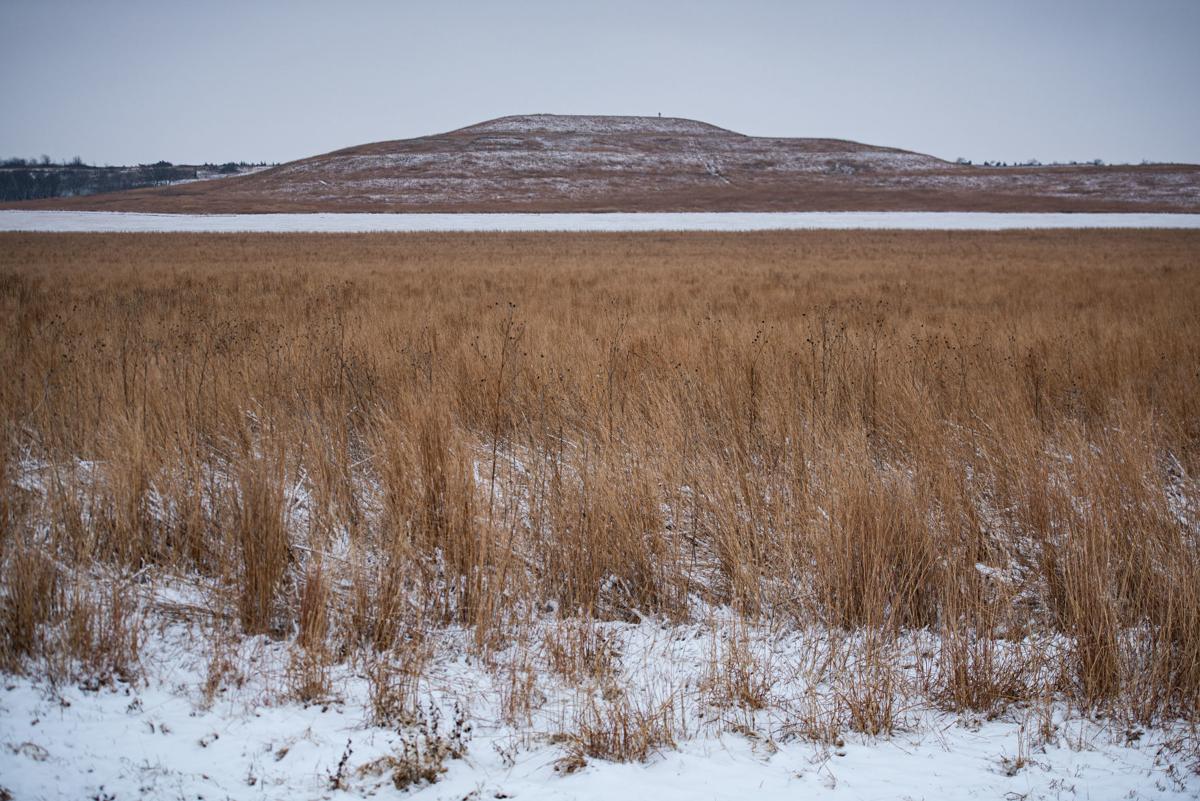 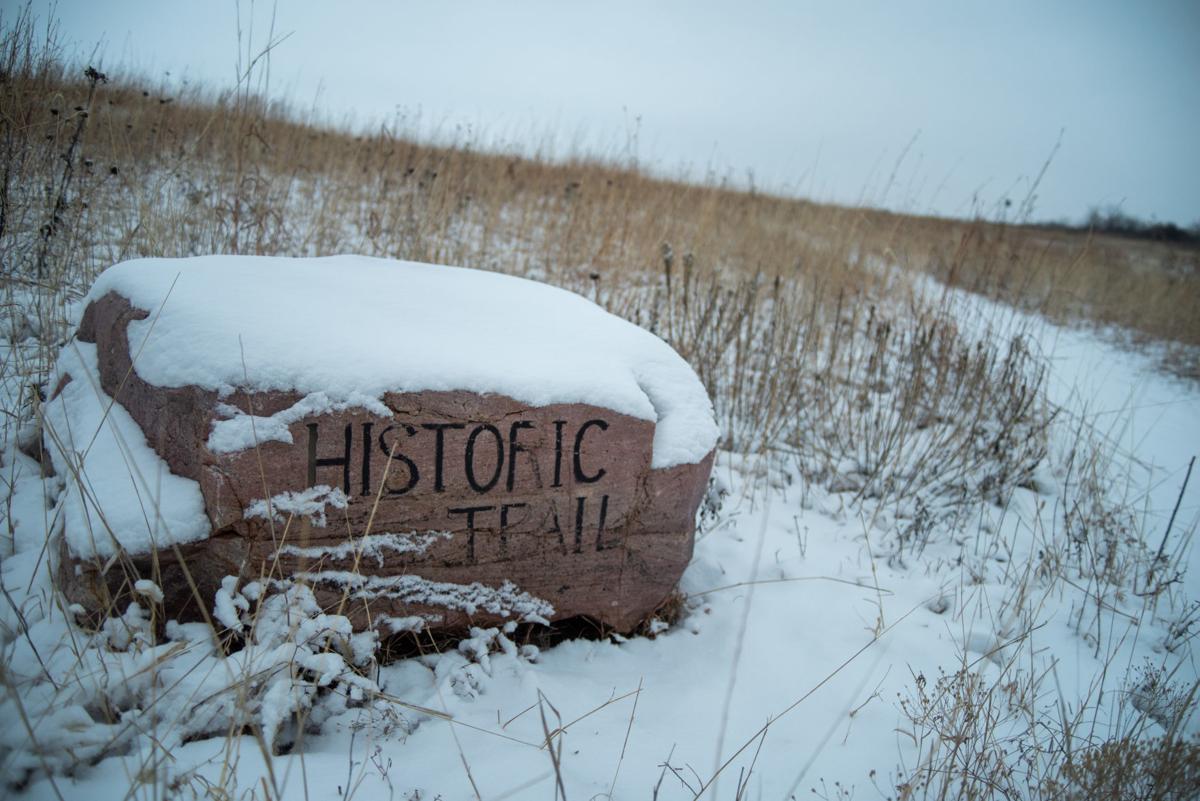 The historic trail up to Mount Mitchell. 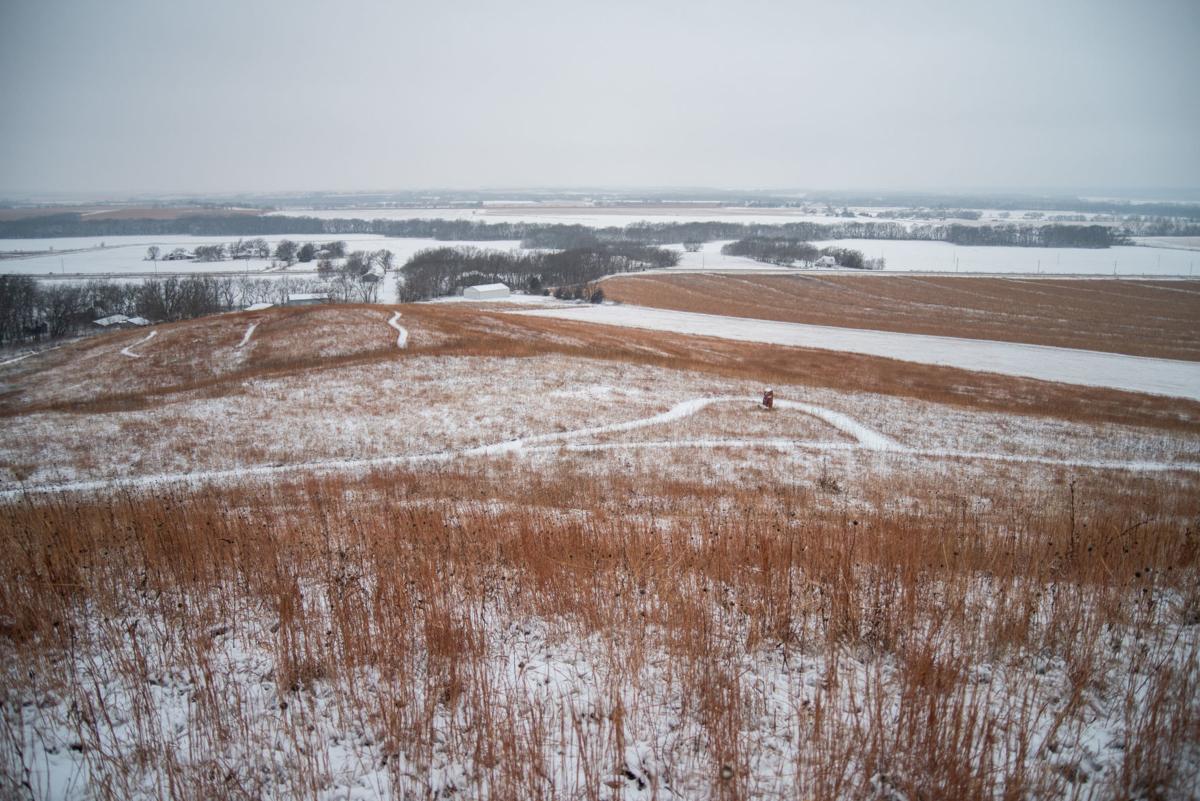 Trails are seen carved in snow from the top of Mount Mitchell. 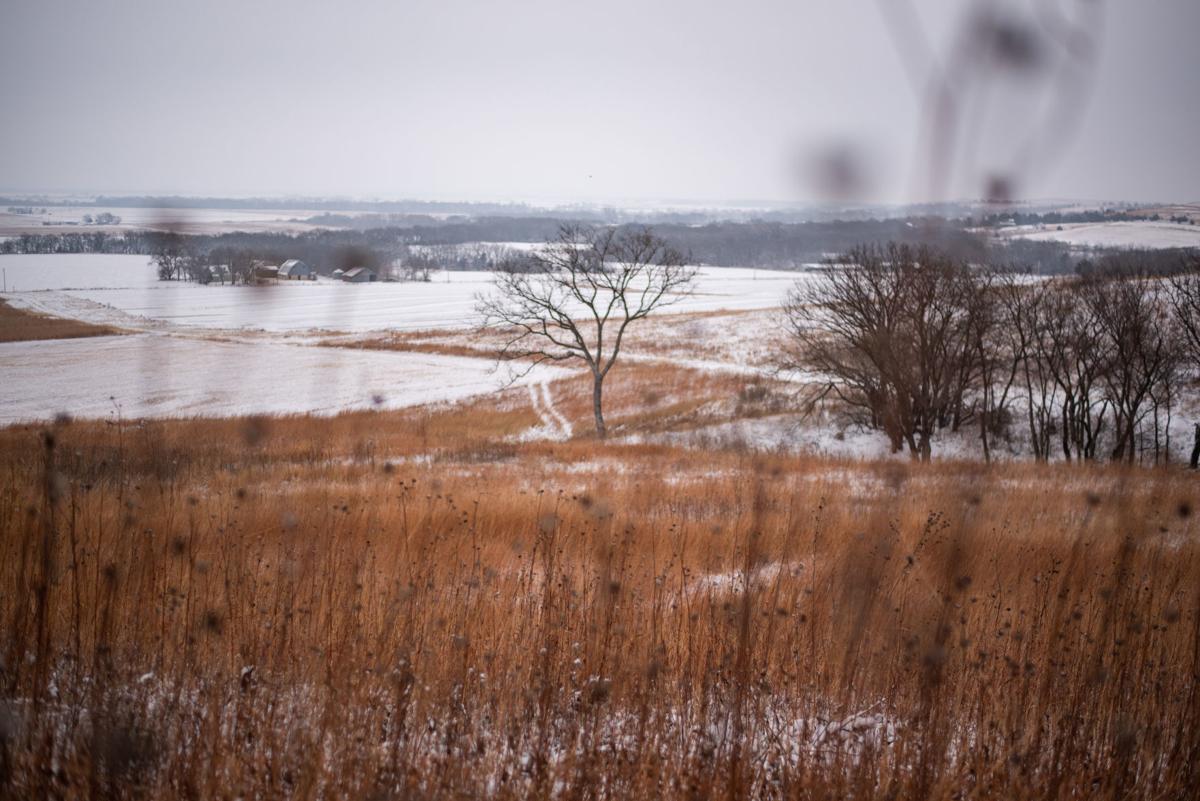 A tree sits at the base of Mount Mitchell where there is another trail entrance. 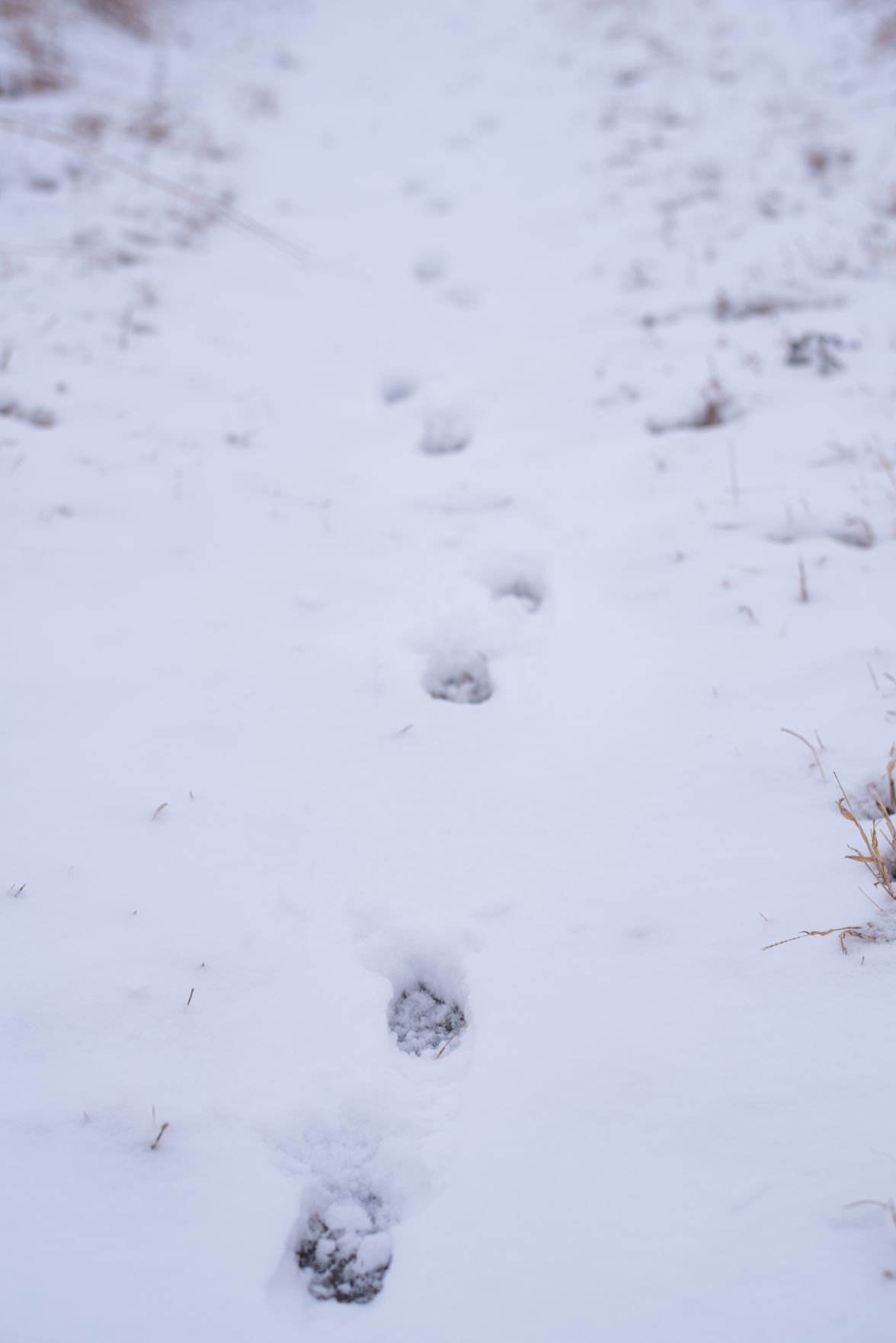 Coyote tracks on the historic trail on Mount Mitchell. 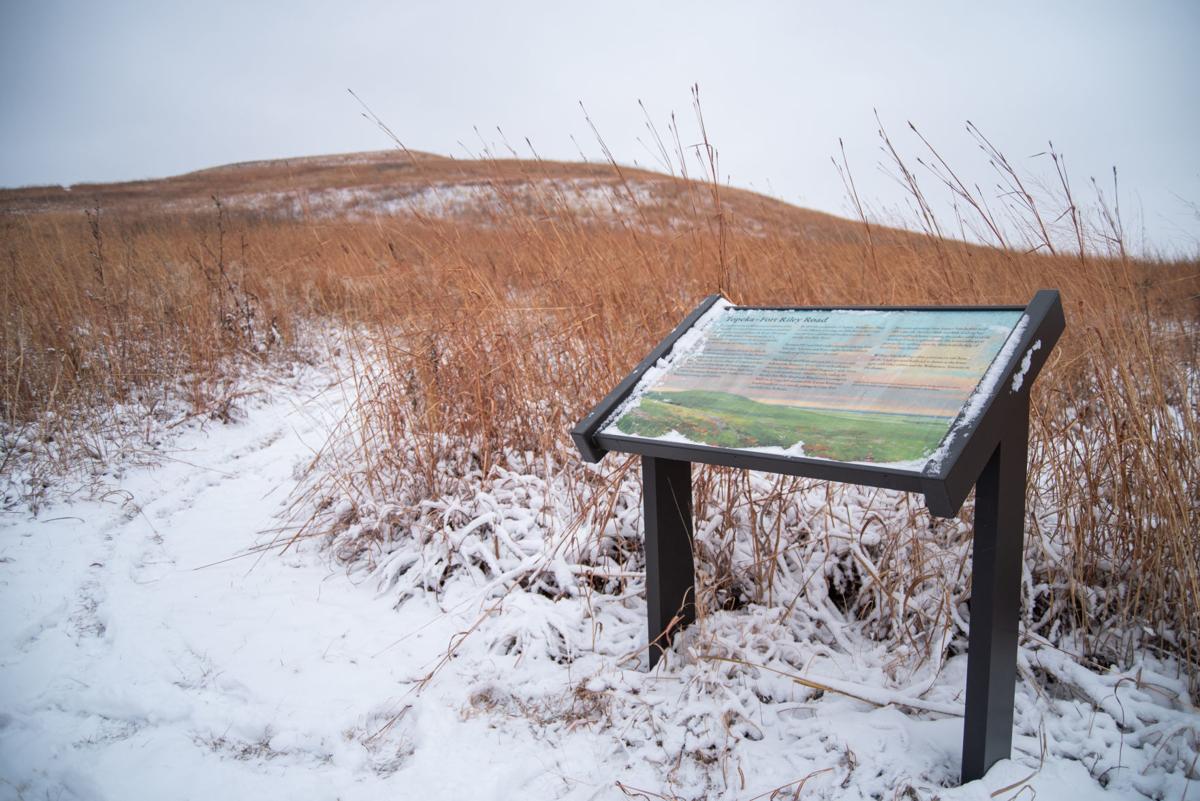 A placard about Topeka-Fort Riley Road sits at the base of Mount Mitchell. 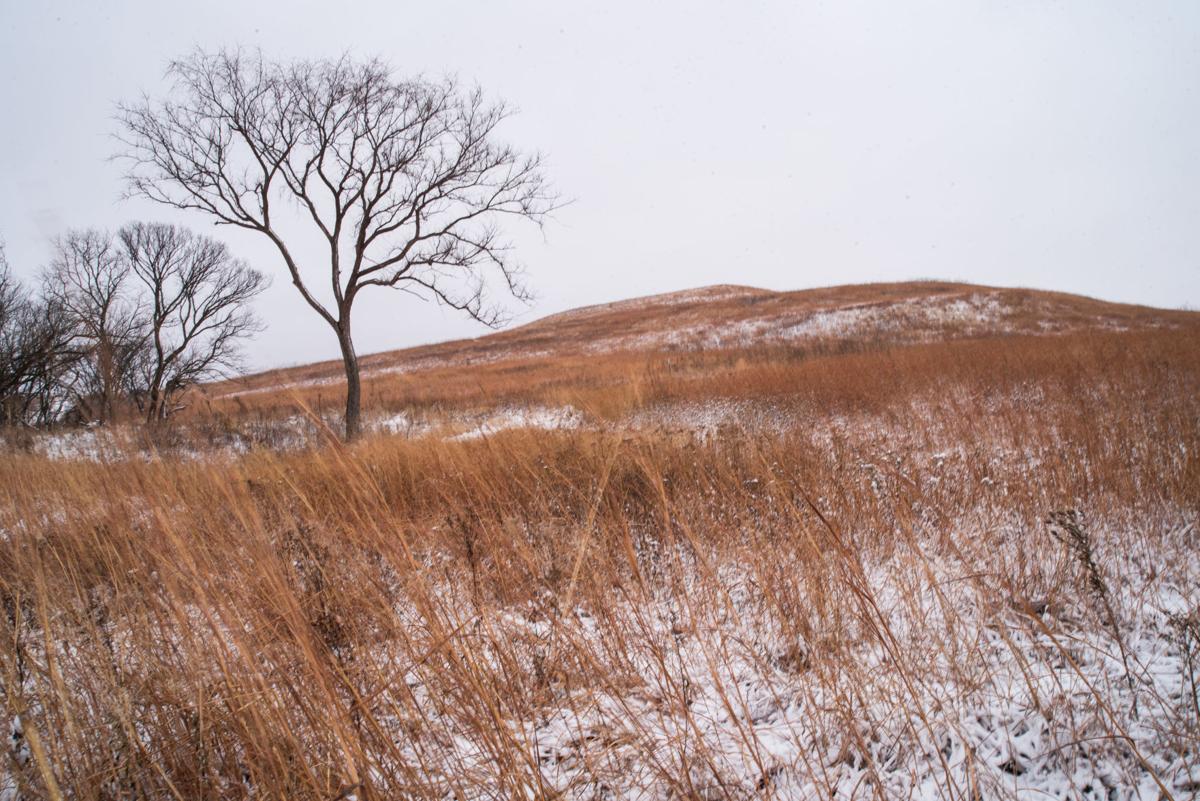 A tree sits at the base of Mount Mitchell. 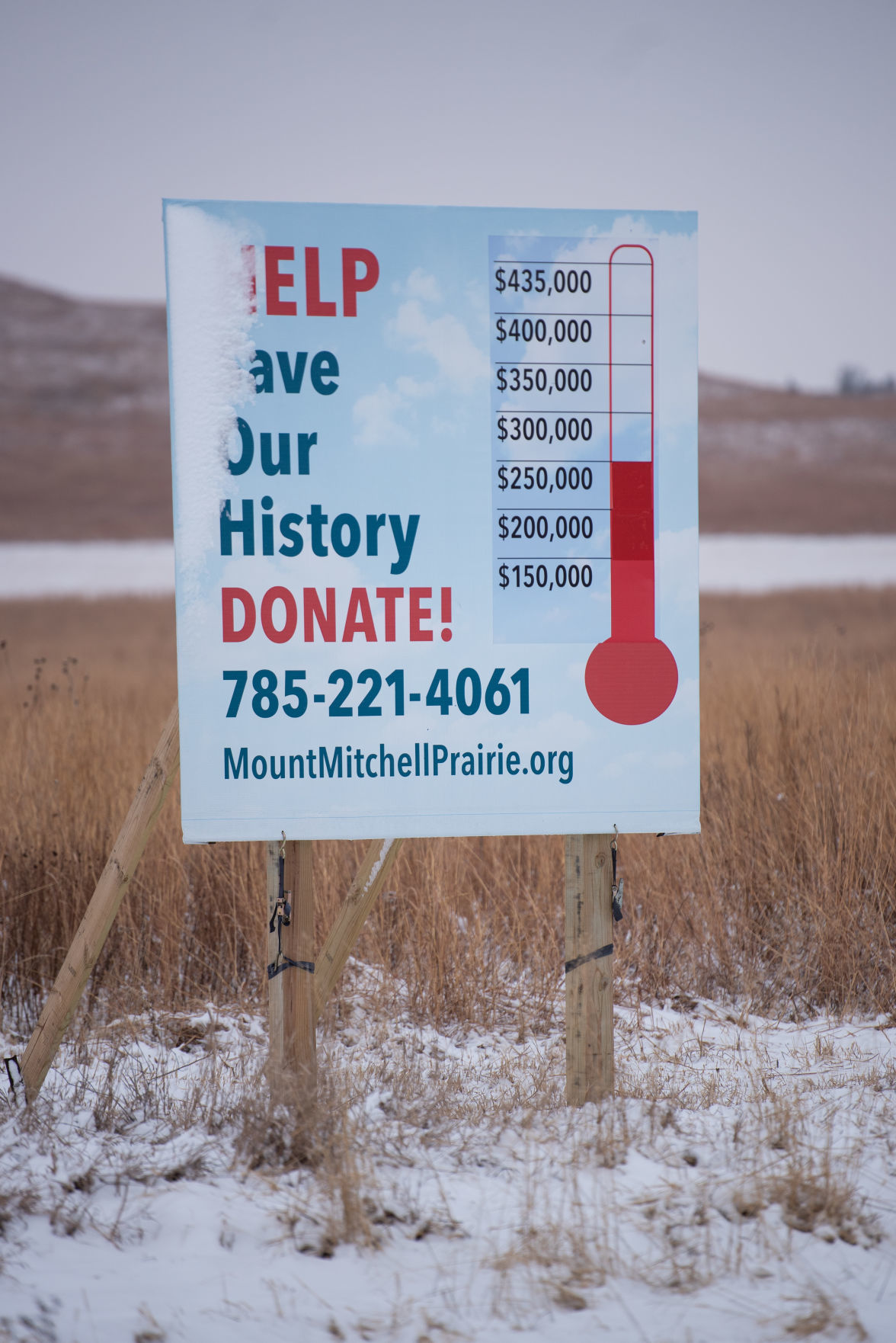 A donation sign sits at the bottom of Mount Mitchell. 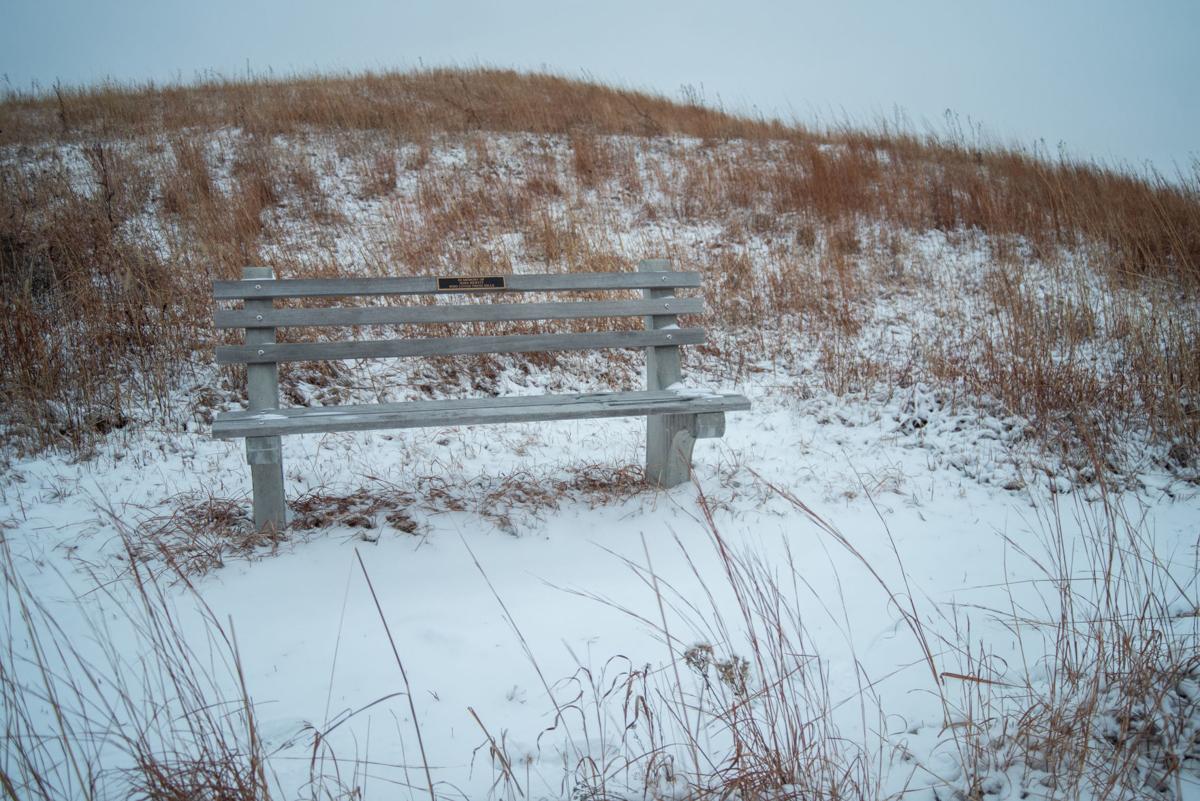 A bench sits on the historic trail up to Mount Mitchell. 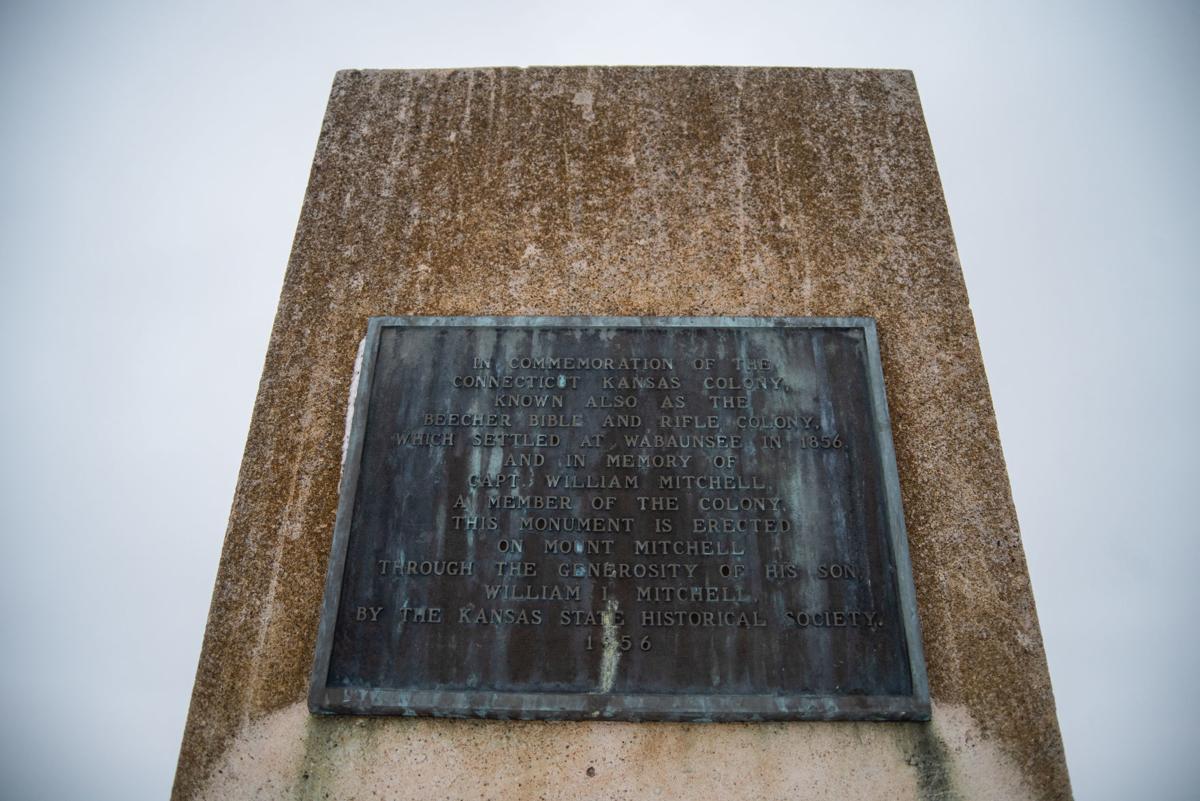 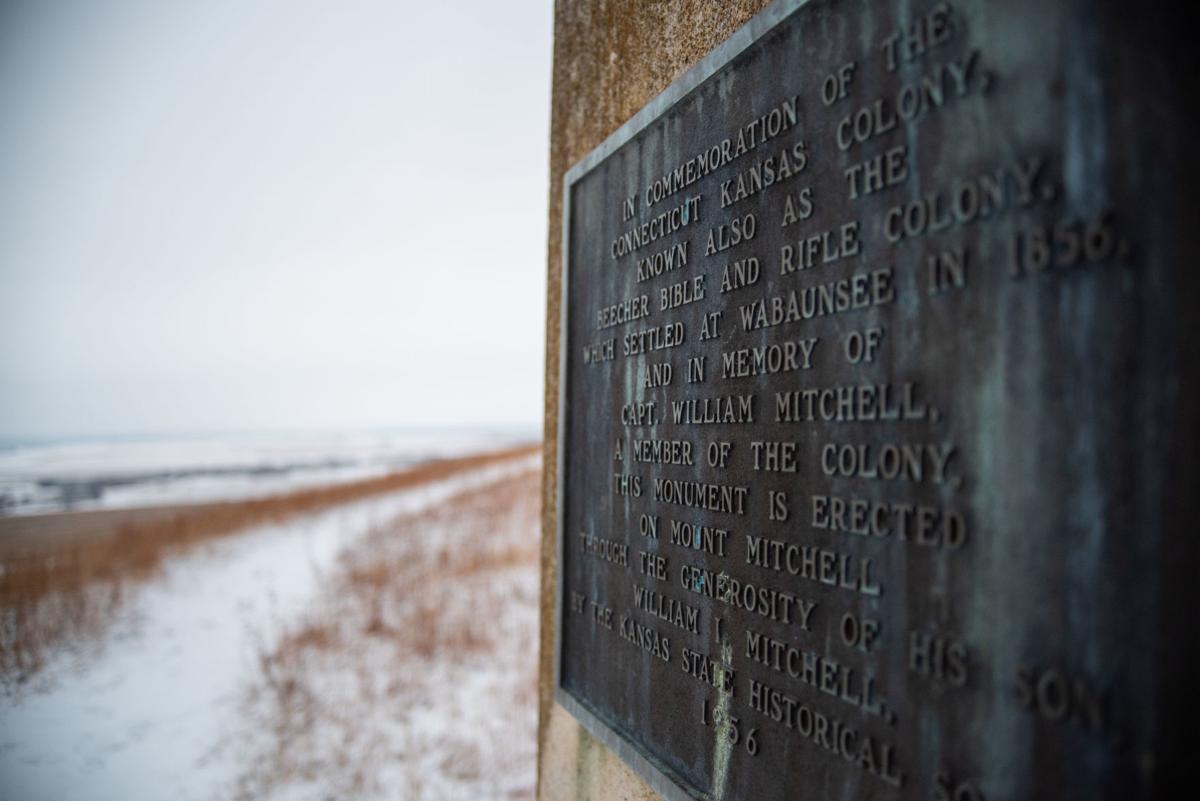 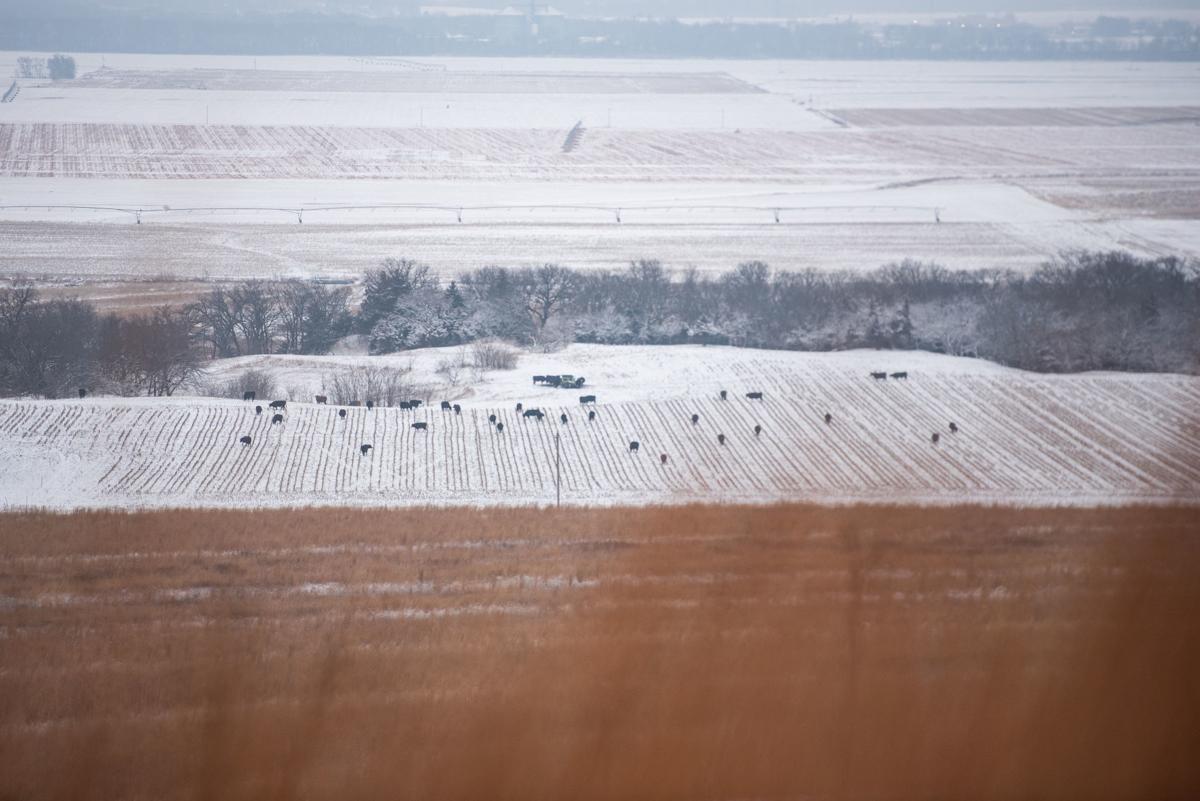 Cows can be seen in the distance from the top of Mount Mitchell.

Rafael Garcia walks up the historic trail to Mount Mitchell.

The historic trail up to Mount Mitchell.

Trails are seen carved in snow from the top of Mount Mitchell.

A tree sits at the base of Mount Mitchell where there is another trail entrance.

Coyote tracks on the historic trail on Mount Mitchell.

A placard about Topeka-Fort Riley Road sits at the base of Mount Mitchell.

A tree sits at the base of Mount Mitchell.

A donation sign sits at the bottom of Mount Mitchell.

A bench sits on the historic trail up to Mount Mitchell.

Cows can be seen in the distance from the top of Mount Mitchell.

WABAUNSEE — A few miles south of Wamego and east of a bend in the Kansas River, there’s a hill that overhangs and looms over the rest of the rolling prairie.

Covered in towering tallgrass, here is the hill that some of the state’s earliest settlers walked by as they laid their hopes in finding a better tomorrow at the end of their trails, leaving behind only shallow rutted lines where their wagons rattled against the landscape.

Here is the hill that overlooks the homestead where Captain William Mitchell and his sister Agnes, abolitionists from Connecticut, sheltered freedom seekers as they hid from slave hunters during the state’s bloody origins in the mid-19th century.

Here is the hill — the top of the world — which already 1,500 years ago, the land’s original inhabitants considered sacred.

It’s a history that the Mount Mitchell Prairie Guards hope to preserve, protect and promote as one of the few places left in the world to walk through untouched native prairie grass. And it’s a history that they hope to one day see recognized with a dedicated interpretive center and expanded walking trails.

The land’s story as a historical site goes back to 1953, when Mitchell’s son bequeathed the land to the Kansas Historical Society on the condition that the society turn the site into a public park dedicated to his father. Mitchell was a member of the New Haven Colony, or the Beecher Bible and Rifle Colony, made up of abolitionists from Connecticut who did not wish to see the Kansas territory admitted into the Union as a slave state.

The Kansas Historical Society, finding itself unable to meet Mitchell’s son’s wishes, was going to return the land to Mitchell’s descendants in 2006, when a group of local citizens, with the support of the family, instead took on the task. Together over thousands of volunteer hours, they built benches, information kiosks, fences and miles of trails to turn the site into a destination for those who want to walk across the tallgrass like the settlers did in a not-so-long ago past.

“That’s an experience you can’t get anywhere else,” said Michael Stubbs, Wabaunsee Countian and member of the Mount Mitchell Prairie Guards. “That, to me, is one of the best attractions — actually being in the tallgrass.”

Where the world stops

There are many ways to the top of the hill, but the actual trail starts at the end of a small winding, gravel road, aptly named Mitchell Prairie Lane, about half a mile south of the intersection of K-99 and K-18.

At a trailhead by a small parking lot at the end of the road, the volunteers added a small board, explaining the hilltop’s history. The site had always been special, or at least 1,500 years ago, when Native American tribes held a special place for the hill in their hearts.

The trail winds around the slope of the hill, and pink rocks and boulders dot the landscape — the remnants of the glaciers that grinded across the region thousands of years ago. Prairie birds, among the continent’s most endangered species, find refuge in the tallgrass.

Like much of the Flint Hills, the uneven, rocky ground has spared much of the land from agricultural use, and the Prairie Guards burn the land every year to keep invasive trees and brush from encroaching. And in late May, a wide range of flowers paint the hill, with something new to see every year.

From the top of the hill, the world spins a little faster, but far from any earthly distractions, it also stops. Distant coal stacks at the Evergy Jeffrey Energy Center and the Wamego water towers look that much smaller.

The great explorer John C. Fremont, who scouted the Oregon Trail, is said to have made camp on a nearby hill seen from the top of Mount Mitchell, and a military road heading to Fort Riley made its way around Mount Mitchell and by Manhattan before reaching the military post.

Much nearer, Captain Mitchell’s homestead still stands as testament to one of the darkest periods in the state and country’s history. Mitchell’s log cabin, made with timbers from the banks of the Kansas River, was one of the westernmost “stations” on the Underground Railroad, and as many as 100 freedom seekers hid in Mitchell’s attic. Exact records of the situation do not exist, given the highly sensitive nature of the operation, Stubbs said, but historians have pieced together enough to recognize the homestead’s role in the Underground Railroad.

After emancipation, Mitchell continued to house former slaves in a smaller barn he built behind his home. Today, both structures still exist across the highway from Mount Mitchell park, although much of the original cabin has been modernized or built around. But on the south edge of the home, now owned by Mitchell’s descendant Morris Crisler and his wife, Michelle, a stripped back wall shows the original timbers that made up the outside of the cabin.

“Sometimes we’ll sit out here and wonder, ‘Who came here? Who talked? Who was on their road to freedom?’” Michelle said. “If the walls could only talk.”

A future vision for the past

In June, the Mount Mitchell guards purchased 125 additional acres of the original Mitchell Farm property (not including the Crissler’s home), expanding the park to 165 acres. When that land became available, Stubbs said the prairie guards knew they had to act quick, as the land just outside the edge of the flood plain and at the intersection of two state highways was sure to be attractive for developers.

In addition to adding trails and reservable prairie land to the park, Stubbs said the idea is to build a interpretive center, with exhibits on the native flora and fauna, the Native American roots, the hill’s role in the Underground Railroad and other bits of the area’s history.

But first, the prairie guards must pay back a $435,000 mortgage they took to buy the additional acres, although they only have $175,000 left, and the organization is negotiating to sell a strip of land near K-99 for a future highway expansion project.

Stubbs, a retired film location scout, hopes that in his lifetime, the site is eligible to be listed on the National Register of Historic Places. The hill is already a National Park Service-authenticated Network to Freedom Underground Railroad site and a stop along the National Stone Scenic Byway.

In the near future, he and the other prairie guards hope to make their dreams of the interpretive center into reality, although the priority is paying the mortgage.

Many people from around the region — such as schools, scouting groups, hikers, geologists and birders — already trek out to the property, and the Mount Mitchell Prairie Guards work with docents at the Flint Hills Discovery Center to bring people interested in tallgrass out to the hill.

For that reason, Stubbs doesn’t doubt that an interpretive center would help bring even more people. The prairie guards will host an open house — the Mitchell Farm and Prairie Celebration — on May 15, just as the hill begins to hit peak bloom.

“People should come out to here to connect with nature — to learn about the history of the site and just be inspired,” Stubbs said. “There’s benches out here for people to come and just sit and enjoy the view.”