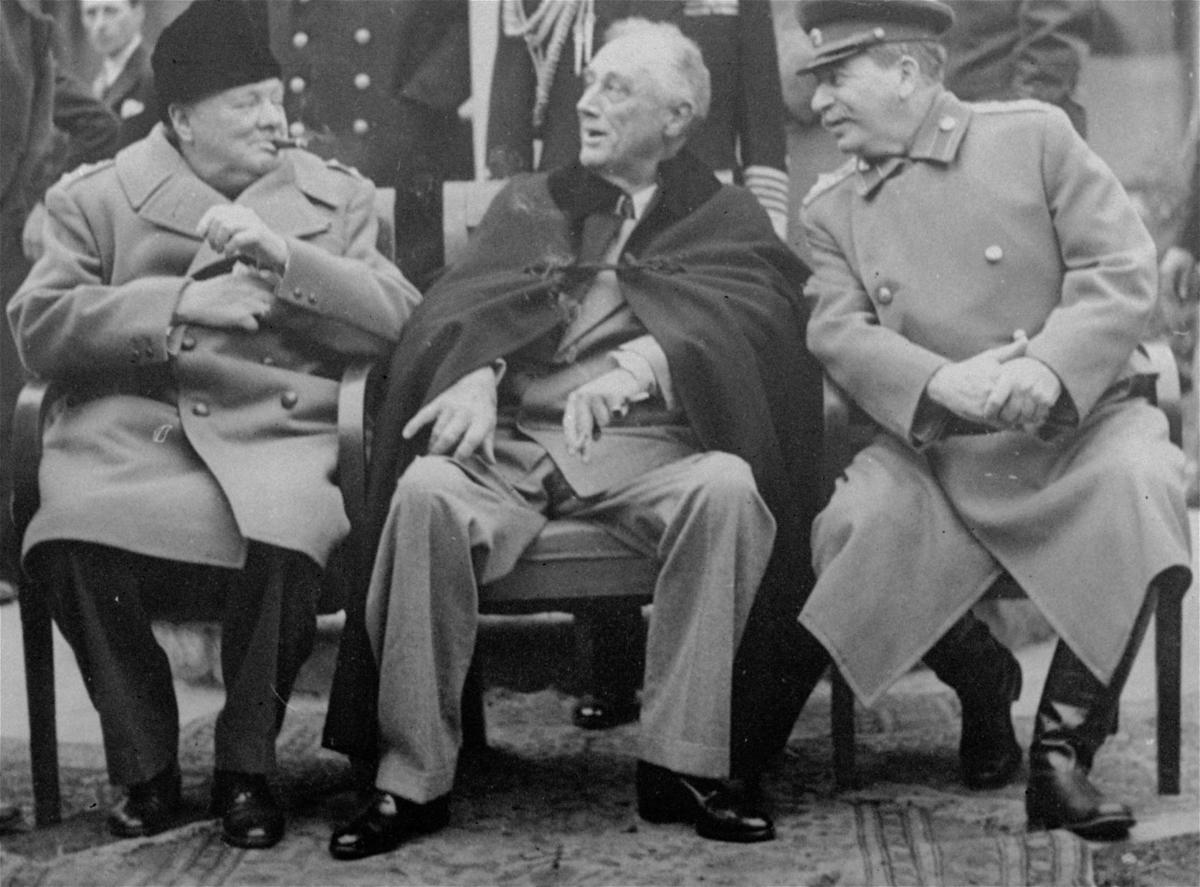 Prime Minister Winston Churchill, left, smokes a cigar while meeting with President Franklin D. Roosevelt, center, and Russian Marshal Josef Stalin, on Feb. 12, 1945, at the Livadia Palace gardens in Yalta. Catherine Grace Katz writes about the Yalta Conference from a different perspective in “The Daughters of Yalta.” 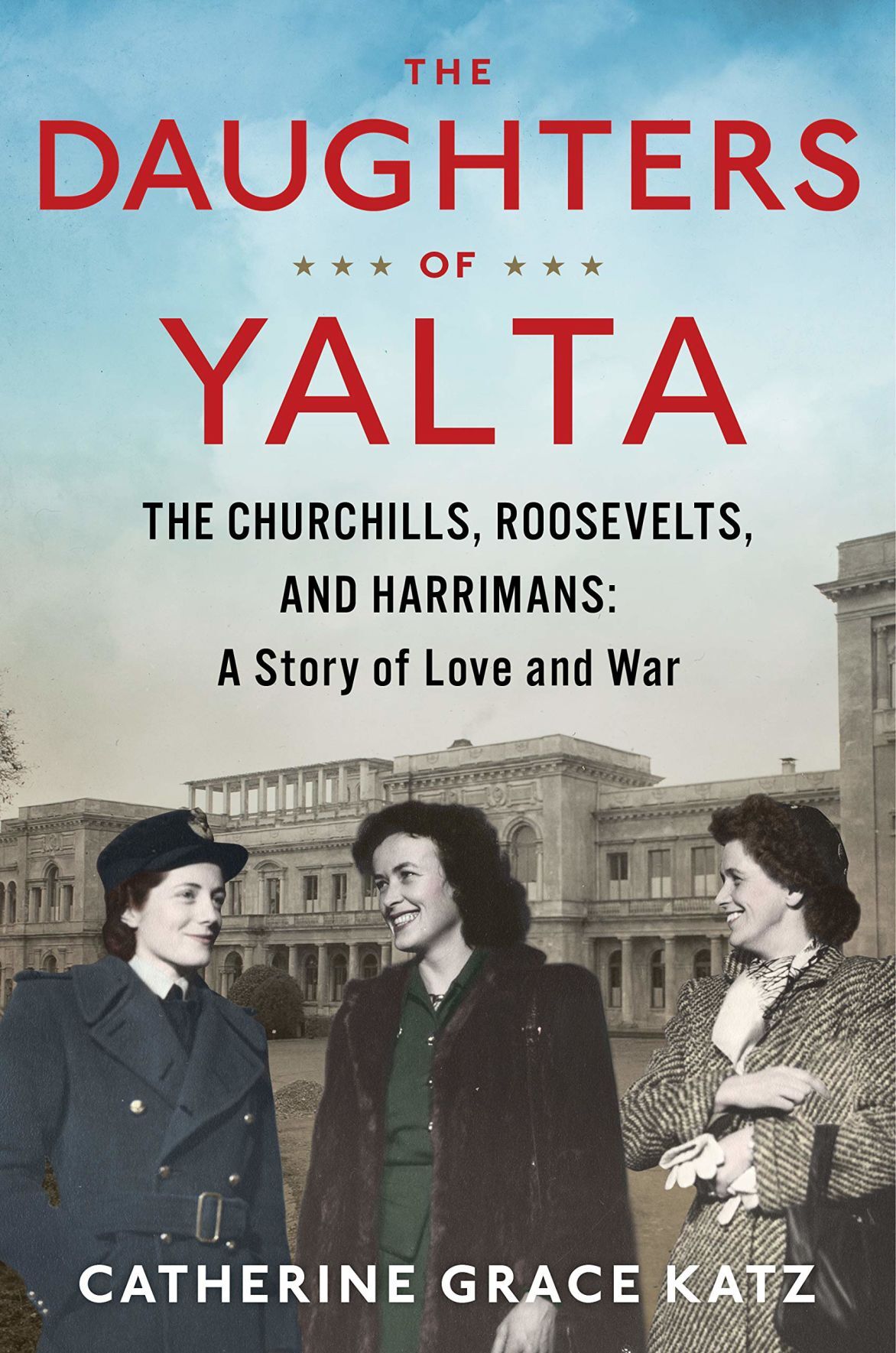 “The Daughters of Yalta: The Churchills, Roosevelts, and Harrimans: A Story of Love and War,” by Catherine Grace Katz. Houghton Mifflin Harcourt, 2020. 400 pages, $28.

Prime Minister Winston Churchill, left, smokes a cigar while meeting with President Franklin D. Roosevelt, center, and Russian Marshal Josef Stalin, on Feb. 12, 1945, at the Livadia Palace gardens in Yalta. Catherine Grace Katz writes about the Yalta Conference from a different perspective in “The Daughters of Yalta.”

“The Daughters of Yalta: The Churchills, Roosevelts, and Harrimans: A Story of Love and War,” by Catherine Grace Katz. Houghton Mifflin Harcourt, 2020. 400 pages, $28.

“The Daughters of Yalta” is the gripping story of the Yalta Conference in Feb. 4-11, 1945, between U.S. President Franklin Delano Roosevelt, British Prime Minister Winston Churchill and Soviet Union strongman Josef Stalin to decided the postwar future of Europe.

Of course, any such international undertaking has a large number of delegates (dozens in each delegation), with each of the three contingents staying in their own palace several miles from the others. Author Catherine Grace Katz wisely provides a list of the delegates in each group.

At the time of the conference, the final defeat of Hitler was imminent as Allied armies pushed toward Berlin from the west and the Soviets from the east. The conference was housed in the old czarist Livadia Palace near the town of Yalta on the Black Sea in the long contested region of Crimea. FDR and Churchill were rightly concerned that Stalin would continue occupying nations he had overrun in the campaign against Hitler. The conference aimed to develop a plan to partition postwar Germany and set up democratic governments in nations Hitler had occupied, especially Poland.

Although the Yalta conference is often characterized as a failure of the West and a capitulation to Stalin that set the stage for the Cold War (1945-91) Soviet domination of Eastern Europe, the author suggest a more nuanced interpretation. It may be that the West did the best they could, given that Stalin basically occupied eastern Europe by the time Hitler surrendered. The simplistic view that Roosevelt’s failing health “gave away” Poland, Romania and other nations is probably too glib.

The unique aspect of this account is that it is told through the eyes of the three “famous daughters” who accompanied and assisted their fathers. Anna Roosevelt (1906-75) was the oldest child (and only daughter) of FDR. She was one of the few attendees who knew how gravely ill her father was. As such, she and his doctors worked very hard to conceal this fact from the others at Yalta. Although Roosevelt survived the conference, he died about two months later.

Winston’s daughter Sarah Churchill (1914-82) was an actress and military officer. Of all her siblings, she was the closest and most trusted advisor to her father.

Kathleen Harriman (1917-2011) was the daughter of Averill Harriman, U.S. ambassador to the Soviet Union. She was her father’s official hostess in Moscow, and that responsibility carried over to arrangements for the conference in Yalta.

None of the three daughters was an official representative to the conference, and as such they were not present in the closed-door official plenary sessions. However, the only women present, other than servants, seemed to be widely known and respected as professionals. Although not close friends, they did share some intimate moments during the conference. Although there is some fascinating accounts of the give and take at some of the plenary sessions, the more valuable contribution of this accounting is the general ambiance of the meetings, the informal moments between sessions and the loving, but sometimes challenging, discussions between fathers and daughters.

The immersive details of the surroundings really place the reader in the midst. For example, the hourslong drive from the airport to the conference site over narrow and isolated mountain roads was a harrowing trip. Once at the palaces, where they would stay for a week, the insufficient bathrooms required eminent diplomats to line up in the hallways for their turn at the showers. Churchill along with FDR and the other Americans grew very tired of the heavy diets of caviar, vodka and other rich Russian food that appeared at most meals.

There are two very helpful final chapters describing the consequences of Yalta, as well as the later lives of the three daughters. They all experienced significant tragedy in their lives. There are also over 50 pages of footnotes for the serious scholar. Much of the material comes from letters written by the three women and others. The author is to be credited for her meticulous tracking down of these sources.

Although this is historian and writer Katz’ first book, she shows tremendous promise for her thorough and gripping exposition and the feeling she gives the reader as being right there in the action of the conference. The unique point of view of the three women is a winning perspective that allows a view on some fascinating aspects of such an event that are normally not considered in historical accounts. This is a valuable and absorbing read for both the historian and the interested layperson.