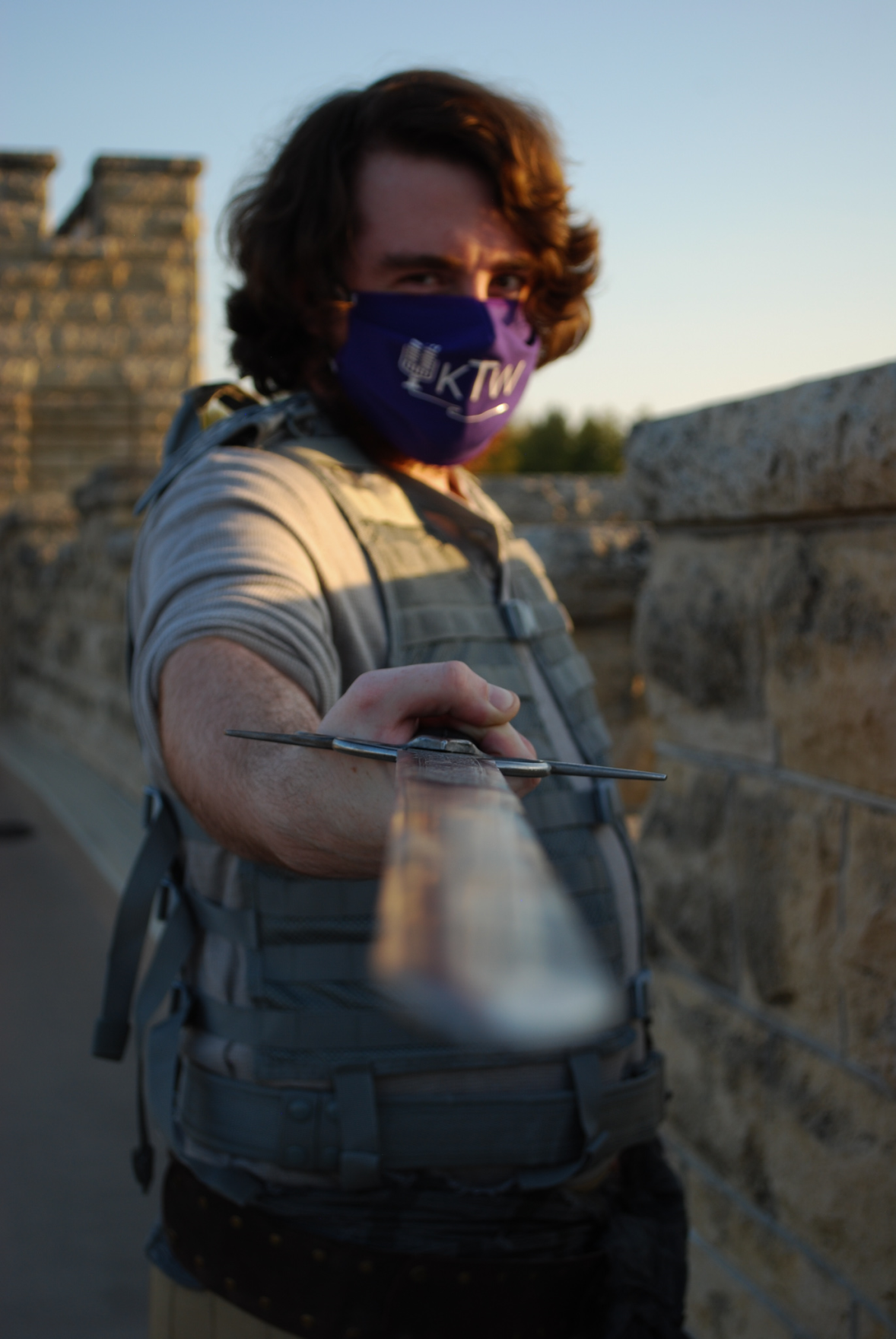 A student from the cast of Macbeth wears a mask promoting “Kansas Theatre Works,” a podcast from the K-State School of Music, Theatre and Dance. The department launched the podcast to give students a chance to perform while stages are closed. 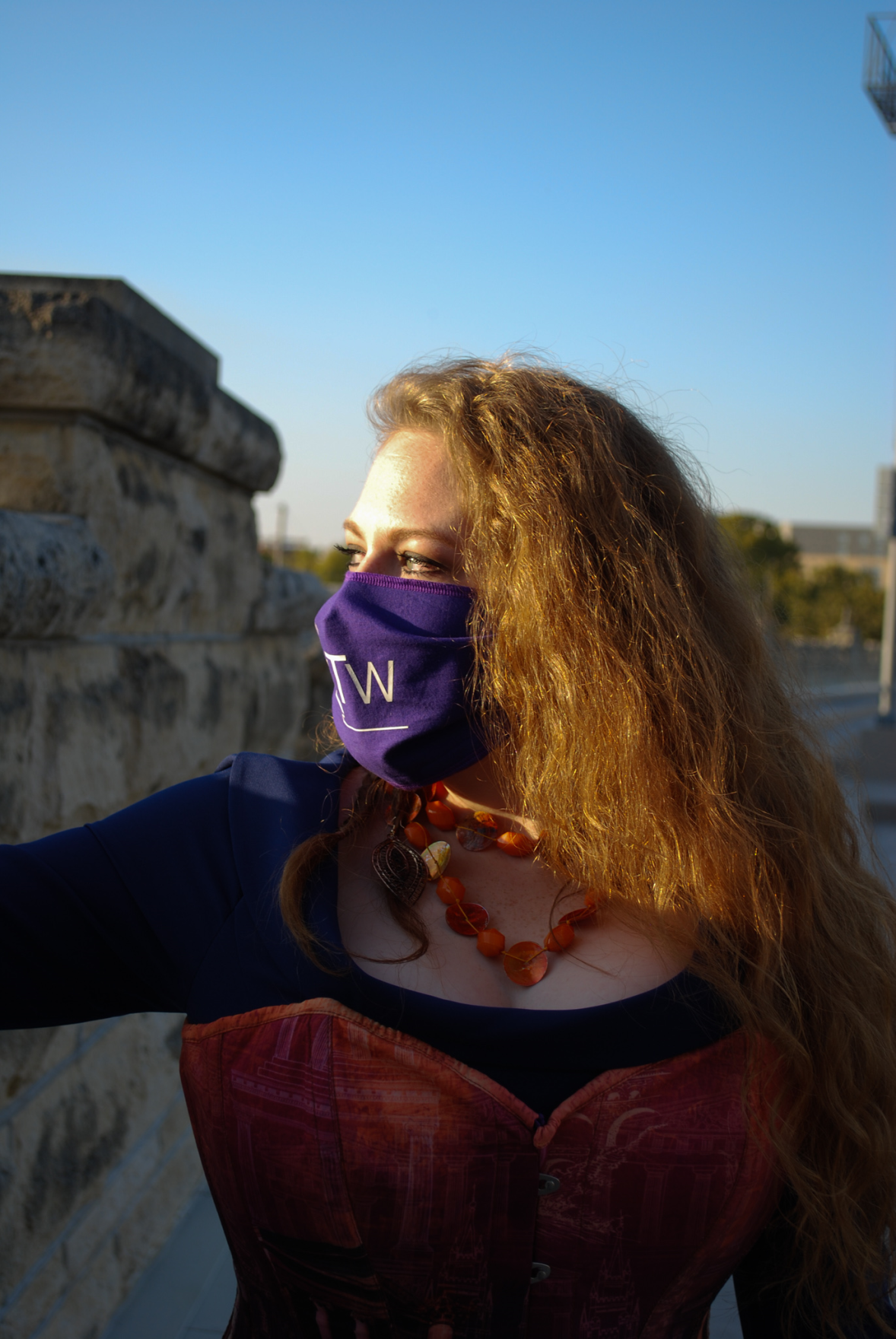 A student from the cast of Macbeth wears a mask promoting "Kansas Theatre Works," a podcast from the K-State School of Music, Theatre and Dance. The department launched the podcast to give students a chance to perform while stages are closed.

A student from the cast of Macbeth wears a mask promoting “Kansas Theatre Works,” a podcast from the K-State School of Music, Theatre and Dance. The department launched the podcast to give students a chance to perform while stages are closed.

A student from the cast of Macbeth wears a mask promoting "Kansas Theatre Works," a podcast from the K-State School of Music, Theatre and Dance. The department launched the podcast to give students a chance to perform while stages are closed.

K-State theater faculty and students have found their own way to navigate shuttered stages.

The School of Music, Theatre and Dance launched a podcast, “Kansas Theatre Works,” that offers audio-only versions of plays performed by K-State students. As they wait to return to the stage, they have taken advantage of the opportunity to learn a new medium.

“We want to be able to say we kept going,” said theater professor Jennifer Vellenga.

Many venues have shut their doors or gone to livestreamed or prerecorded performances, but Vellenga said that wasn’t the right fit for the theater department because the final performance is only one part of what they do.

“We have to keep teaching,” she said. “We share our performances with an audience, but that’s only part of the training.”

Vellenga launched her own podcast, “Ditch Your Backup Plan,” in February, and working on that made her think it could be a path for her students during the coronavirus pandemic. After the theater faculty discussed the idea, they decided to try it. Vellenga said the students were excited to know they would still be performing.

“The actors seemed relieved, like they had a way forward,” she said. “They didn’t want to keep kicking the can down the road.”

The department has released its podcast version of Shakespeare’s “Macbeth” and a series of stories called “Tales of the Weird and Unusual.” Its next show, “One Dead, One Dying,” will be released Thursday.

K-State Theatre alumni wrote many of the plays. Vellenga said they were happy to offer up work for the podcast and were responsive when students needed to make adjustments to adapt the plays to an audio-only format.

These adaptations required adding sound effects and sometimes changing dialogue because a point might otherwise have been made visually.

Although it was a challenge, Vellenga said she felt it was the right option instead of doing, for example, Zoom performances. While many people have done Zoom or masked performances effectively, she said, it requires the audience to suspend its disbelief even more than a normal show.

Gabrielle Henry, a senior, designed the sound for the episode “CHOKE.” Henry, who studied lighting design and sound design, said it was hard to learn the software, but it was a great, although completely different, experience.

Henry said having a digital barrier between her and the other students was difficult, but they found ways to make it work.

“It’s harder to collaborate but it’s still possible,” Henry said. “We just had to adjust.”

Liz Kritikos, a senior theater student who appeared in “CHOKE,” said it was challenging to play off her fellow actors because they were reading each other’s emotions through a screen rather than in person, but it became easier with time and practice. It also meant acting adjustments from what she was used to on stage to what worked for the new medium.

Once it is again safe to hold in person performances, Vellenga said the podcast will likely shift from recorded plays to content like interviews with writers, directors, cast and crew.

“Everybody wants to perform live,” she said. “We’re itching to do that, but we learned this is a way to share bonus content.”

Kritikos said she was sad when she realized she wouldn’t be able to be on stage in her final semester, but that she was grateful she still had a way to perform.

“I love doing live theater, but being able to perform with my peers is one of the best feelings,” she said. “Being able to share something like that is huge.”

Henry said even if it looks (or sounds) different, she was glad there was still a place for theater until it can be live again.

“It’s heartwarming to know there’s still an audience and there are still people relying on theater, because we lost so many forms of entertainment,” she said.

For Thanksgiving Day, the Kansas Theatre Works podcast will release a “Gratitude Episode” and is asking for messages from community members. A recorded message of gratitude could be for a family member, a friend, a business or something you value. Those interested can record a voice memo lasting no more than 20 seconds and email to theater@ksu.edu with the subject line "GRATITUDE." This is audio only, no video, and must be sent by Nov. 20.