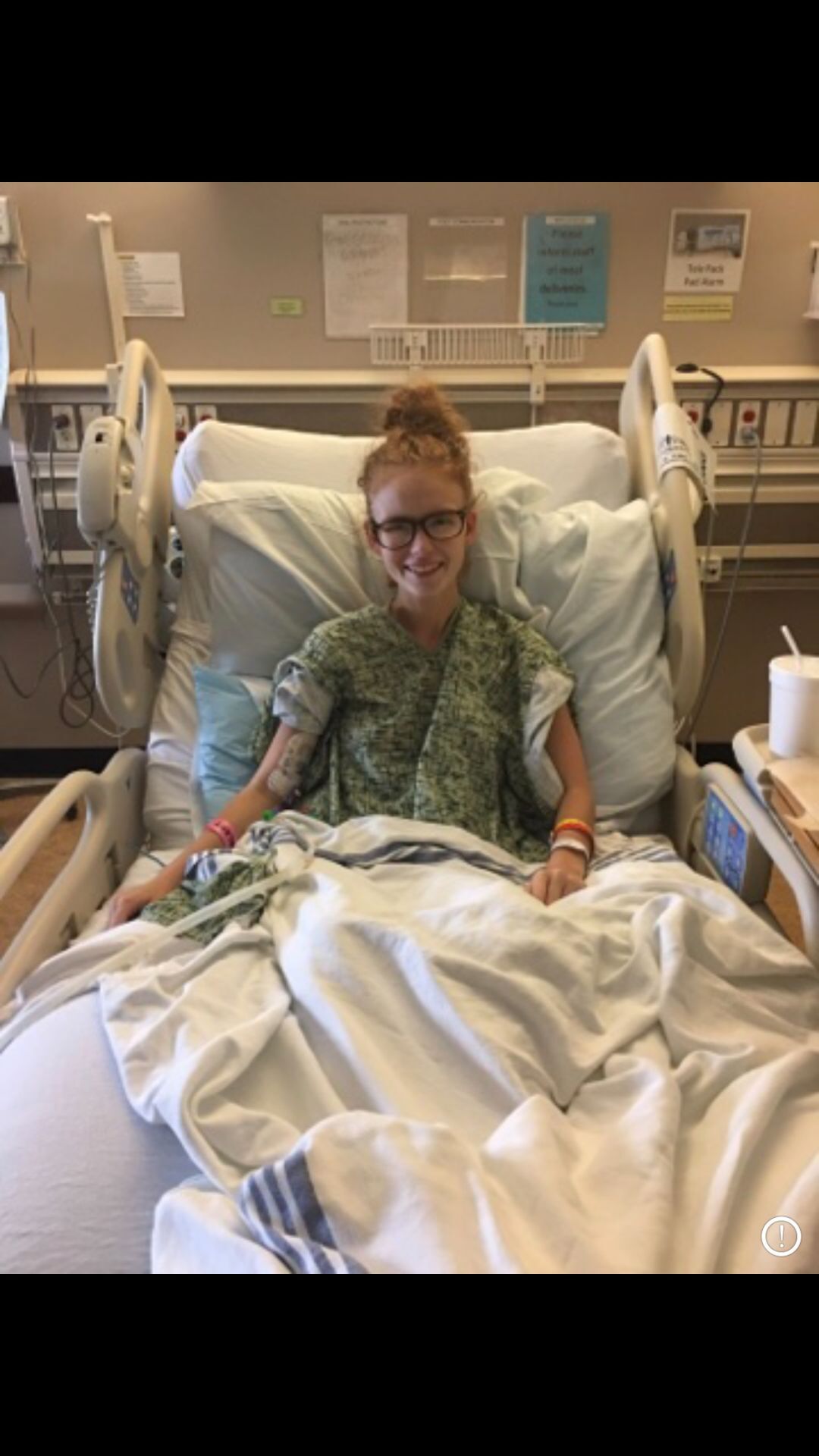 Cecilia Erker of Manhattan, 21, sits in a hospital bed during her stay at KU Medical Center, where she had lung surgery for a COVID-19-related infection. 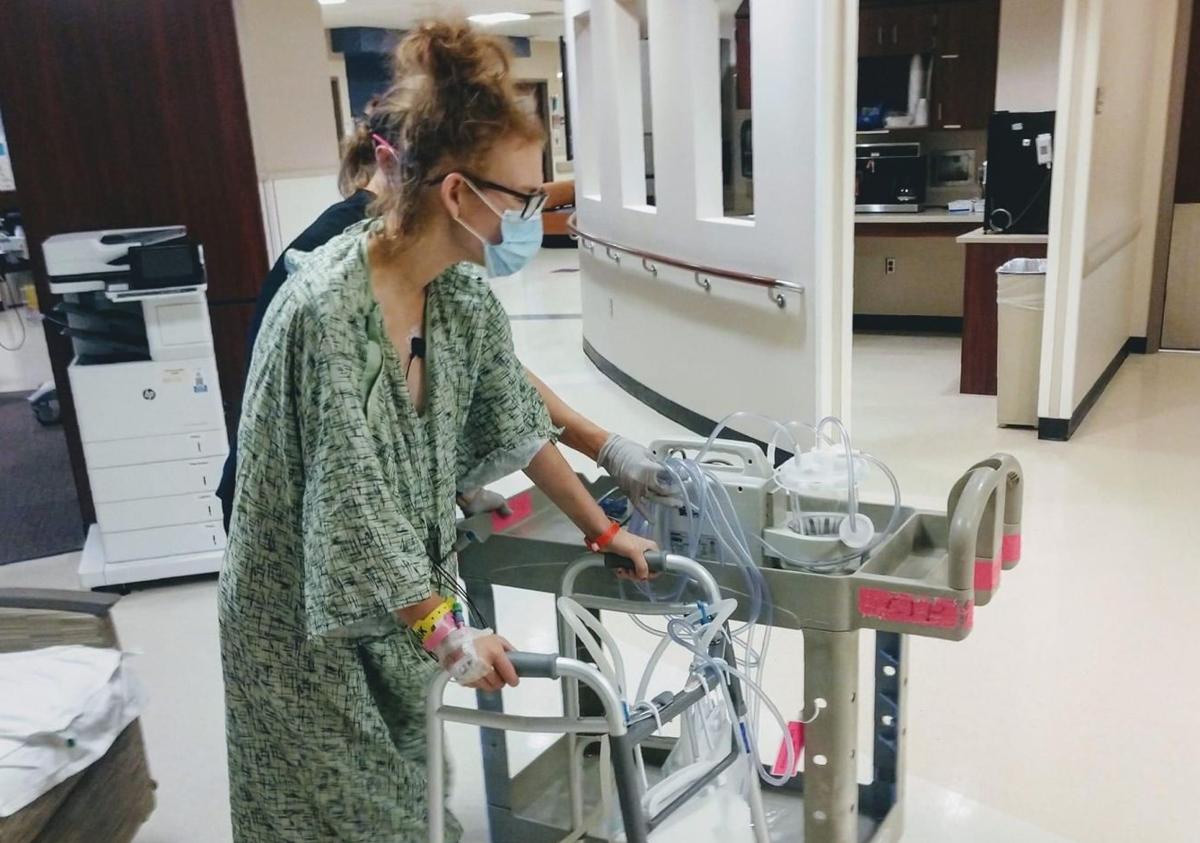 Cecilia Erker of Manhattan, 21, walks with a walker during her stay at KU Medical Center, where she had lung surgery for a COVID-19-related infection. 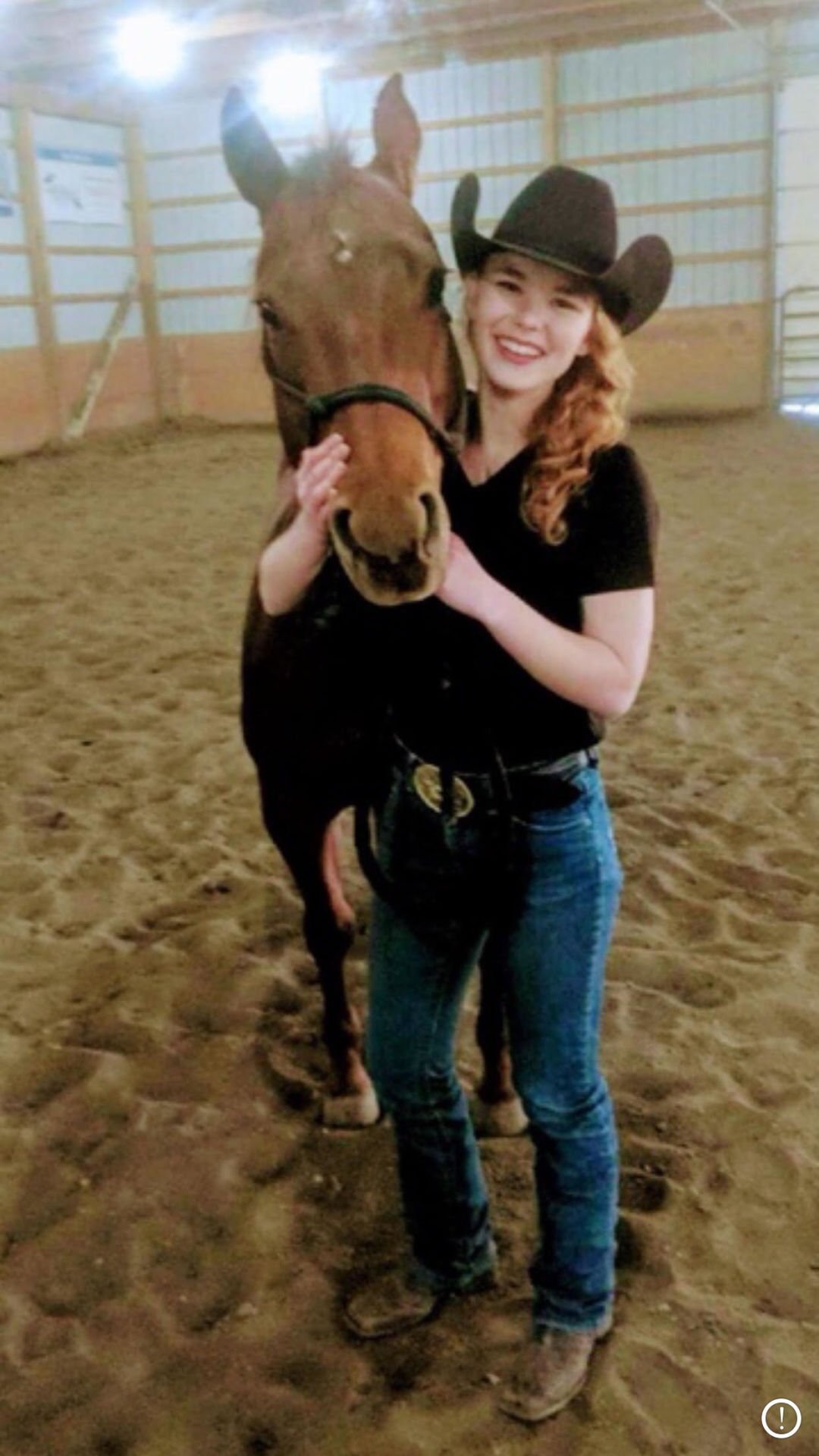 Erker with her horse. She said she lost about 30 pounds while she was sick. 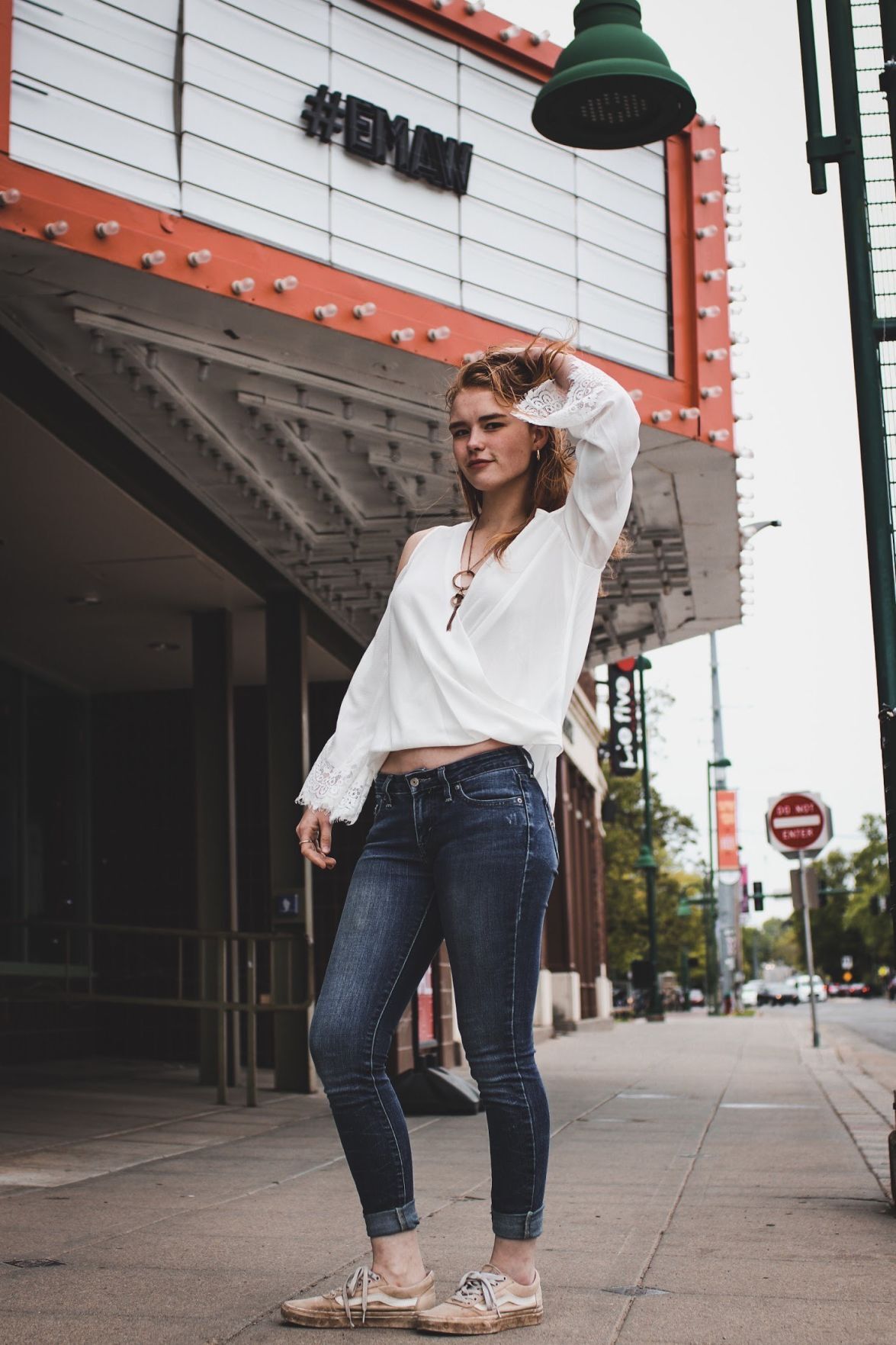 Erker stands for a photo in front of Rally House in Manhattan.

Cecilia Erker of Manhattan, 21, sits in a hospital bed during her stay at KU Medical Center, where she had lung surgery for a COVID-19-related infection.

Cecilia Erker of Manhattan, 21, walks with a walker during her stay at KU Medical Center, where she had lung surgery for a COVID-19-related infection.

Erker with her horse. She said she lost about 30 pounds while she was sick.

Erker stands for a photo in front of Rally House in Manhattan.

Cecilia Erker had thought she would celebrate her 21st birthday like most K-State students: in Aggieville, having drinks with friends.

But in July, she contracted COVID-19. Doctors believe that caused pneumonia, which led to a life-threatening infection in her right lung. While she was in the hospital recovering from a dangerous operation and in extreme pain, she said there was a point when she wasn’t sure she would make it to her birthday on Aug. 11.

Cecilia, a Manhattan native and graduate of Manhattan High, has been recovering at home for about five weeks since the surgery, in which doctors removed parts of her lung. She no longer has to use a walker, and doctors removed the last of chest tubes on Thursday. But even as she begins to feel better, Cecilia said she knows the ordeal will have a lasting effect on her life. She said she wants to share her story in the hope that it makes people think twice about their actions.

‘I THOUGHT I WAS INVINCIBLE’

At the beginning of the summer, Cecilia had just finished her junior year at K-State, where she was studying animal science. She was an active person, she said, running a few miles a day and eating well.

“She’s very very tough, very resilient,” said her dad, Chris Erker. “She was an ag girl, on the equestrian team… She was not a prissy little girl, shall we say.”

As the coronavirus spread through the country, she said, “I did normal 20-, 21-year-old kid things. I thought I was invincible. I thought if I got sick I would bounce back in one or two weeks.”

At the time, local mask ordinances did not yet exist. She said she didn’t wear a mask unless she would be seeing her grandparents or something like that. She went to bars, went to the lake, hung out with friends.

“When I started to feel sick, I didn’t think much of it,” she said. “I thought it was just allergies.”

But soon after that she could barely get out of bed. She said she spiked a high fever that wouldn’t go away. Then came a cough, sore throat and difficulty breathing.

Cecilia got tested that day, July 1, and a few days later got the positive result. She lived in an apartment with a roommate, who also had tested positive.

“I thought OK, a couple of weeks will go by and I will feel better. And I did not get better,” she said.

Cecilia had gone to the emergency room in Manhattan once. She was throwing up and had diarrhea. She said she couldn’t keep anything down, even water. Doctors gave her IV fluids and nausea medication and sent her home. But things continued to get worse.

She went back to the emergency room a week later. She lived in a third-floor apartment and realized that she wouldn’t be able to get down on her own. She had to call her dad to help her down the stairs. He said he practically carried her.

‘I WOULDN’T WISH THAT ON ANYBODY’

When she went back to the ER they took a CT scan and a chest X-ray. Erker said her left lung looked totally normal on the X-ray. Her right lung, though, was totally white, “like a snowball.”

“White on an X-ray is an infection,” she said doctors told her.

That evening, July 17, she was admitted to KU Medical Center in Kansas City.

She had a chest tube put in and spent three days in intensive care. Then she spent eight or nine days in isolation on the hospital’s COVID-19 floor. Being alone made her time there all the more difficult.

“That was awful,” she said. “I wouldn’t wish that on anybody.” The only human interaction was nurses coming in to check on her.

Worse yet, because the coughing had been so hard on her vocal chords, she had a hard time even talking on the phone. Most communication at that point was by texting, she said.

Her dad, Chris, said a team of doctors was working on her case.

They knew they were going to have to do surgical intervention of some type, but they didn’t know how to proceed because she kept testing positive for COVID-19. They weren’t sure they wanted to do surgery while she was positive.

“We had infectious disease doctors saying, ‘Well, because she’s had it so long, it’s showing as positive,’” he said.

Eventually, she did test negative, and they moved her to a recovery wing, where she wasn’t completely isolated.

Her lung damage, though, was extensive. She said the doctors told her the infection had caused tissue the texture of orange rind to develop on her lung, and it was preventing her lung from expanding. They needed to remove it.

“Originally thought they would have to remove upper lobe of her lung,” Chris said. He said she was on massive doses of IV antibiotics. Then the doctors thought they might have to remove the entire right lung. But Chris said the thoracic surgeon, Dr. Alykhan Nagji, had researched COVID-19 patients who had similar procedures, and the outcomes were not good.

Cecilia went into the operating room not knowing what procedure they would do.

“Bless her heart, she was rightfully so, just terrified,” Chris said. “And so were we. We said our good-byes, said a little prayer.”

“I’ve never been a very religious person, but I got real close to God on surgery day,” Cecilia said.

The operation was Aug. 3. Ultimately the doctors surgically removed parts of the lung that were infected. They also made five incisions in the lung that they left open to allow the infection to come out of the lung naturally. The idea was that those incisions would then seal and adhere to the space that the lung normally occupies.

“She came out of the surgery and was on a ventilator, which was absolutely horrifying for me,” Chris said. “Thank God KU Med allowed both her mom and me to be there during the surgery. But the kiddo, she’s an amazing young woman.”

Though it was a relief that the doctors only had to remove parts of the lung, Cecilia said recovery was difficult because of the level of pain she was in.

“There was a point when I thought I wasn’t going to see 21 years old,” she said, even though her birthday was just days away. “There aren’t words to describe what I went through.”

Chris said she would literally scream because of the pain from the surgery. She also had pain from three chest tubes and difficulty breathing.

“It was unbelievable,” he said, getting emotional as he recalled that time. “One night she was going through a pain episode. She was holding my hand and said, ‘Dad, let me die. I don’t want to live like this.’ No dad wants to hear that.’

Chris said that’s when a pain specialist got involved.

“The pain specialist told me what she had done surgically and physically was as much as the human body can take,” he said. “One of the wonderful things now is that a lot of it Cece doesn’t remember.”

“There are parts (of my hospital stay) where the only thing I can remember is the pain,” she said. “A lot of that came from the chest tubes, surgery pain. I have a scar on my back; they have to spread your ribs apart. I got cut up all over the place. I was in so much pain for so long, I just got used to it. Things that are now a 4-5 on a pain scale a month ago were probably like a 7 or an 8. I felt like my lung had collapsed.”

For a month she said she was walking with a walker and couldn’t stand up straight because of the chest tubes, the last of which came out Thursday.

On Aug. 19, Cecilia was discharged, and she has been recovering at home.

It’s been a long road, but she said her doctors are pleasantly surprised with how she’s doing. She’s been going to KU Med weekly.

About a third of her right lung is working. She said that doctors told her while she can never be a marathon runner, they expect eventually she’ll be able to be active again.

‘IT WAS AN AWAKENING’

Cecilia said at first it was difficult to talk about her experience.

“When it was fresh in my mind, I didn’t want to talk about anything,” she said. “Now, I’ve had a chance to process it and work through it. It is and always will be a pretty big part of my life.”

She said she wanted to speak about it because it might make some people, especially young people, be more careful. And though she knows what happened to her is rare, it is possible for it to happen to people of any age.

Between 2 percent and 4 percent of confirmed cases among people that young are admitted to intensive care units. The fatality rate is low, only 0.1 percent to 0.2 percent.

She said people talk about how COVID-19 doesn’t have lasting symptoms, but she said she’s walking proof that it can. She said since the virus is so new, no one knows how it’s going to affect her 10 or 20 years down the road.

“It really was kind of an awakening for me,” she said. “It changed how I viewed the pandemic itself and the public. It’s little things I didn’t think about before. Before, I was like, ‘Oh, the mask is uncomfortable, I don’t like it. How much good is it doing?’ But now, it’s like, ‘Do what you can.’”

She admits that before this, she was one of the people who didn’t take the virus very seriously.

“It was not the two-week quarantine vacay that I had imagined," she said. “I thought I was going to lay around and watch movies for two weeks.”

Still, she feels hopeful for the future.

“Some days are great and I feel like I can do anything,” Cecilia said. “Other days it’s a challenge to get out of bed. I’m always in some sort of pain, but some days are much worse than others. I don’t know what the next hour’s going to hold. It’s so touchy. I’ve had to remind myself to be grateful for where you are now.”