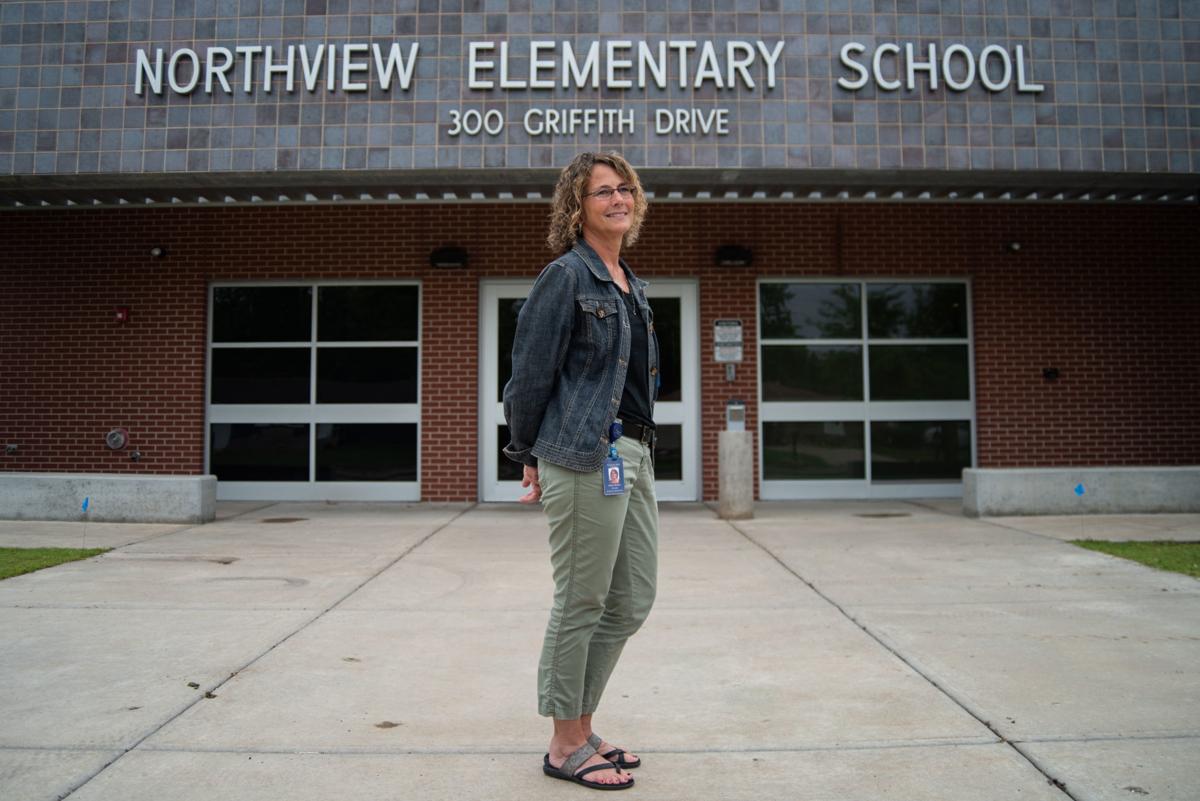 Cleion Morton has been the principal at Northview Elementary school since 2014 and started her career in education more than 30 years ago. Morton is retiring with the end of the academic year. 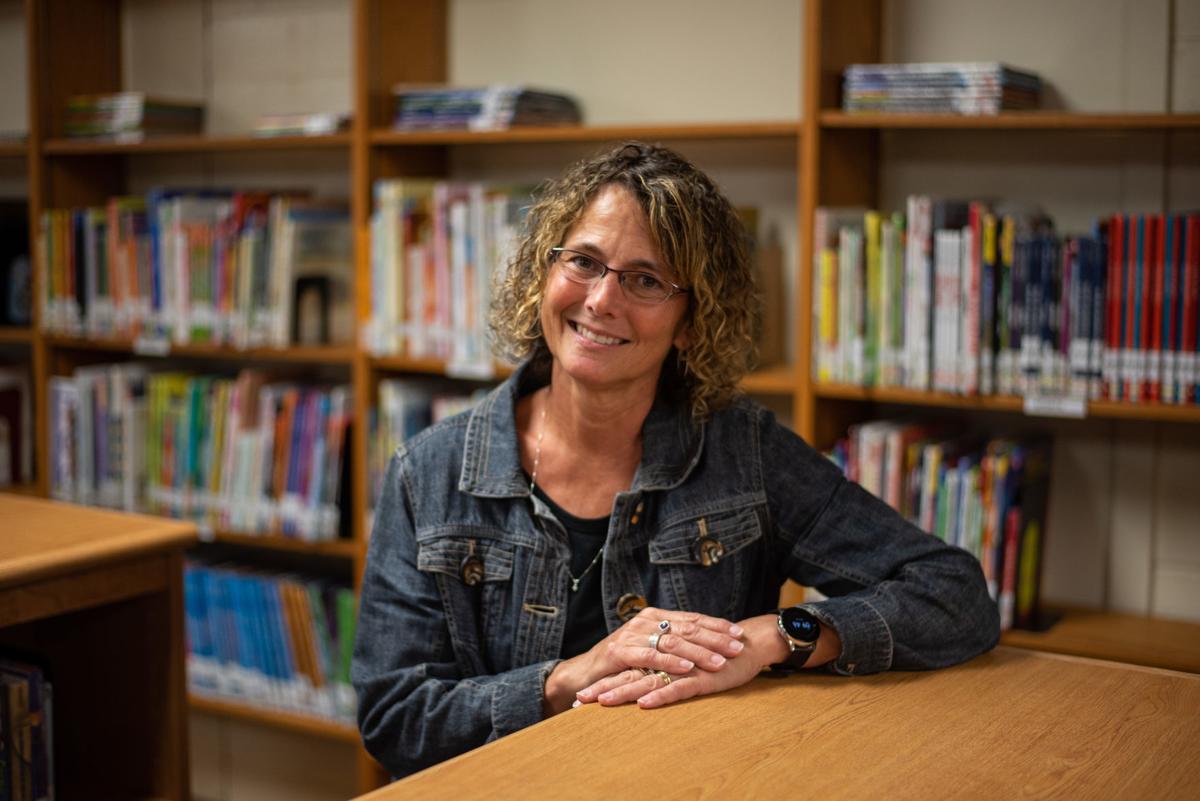 Cleion Morton stands in the library at Northview Elementary School on Friday. 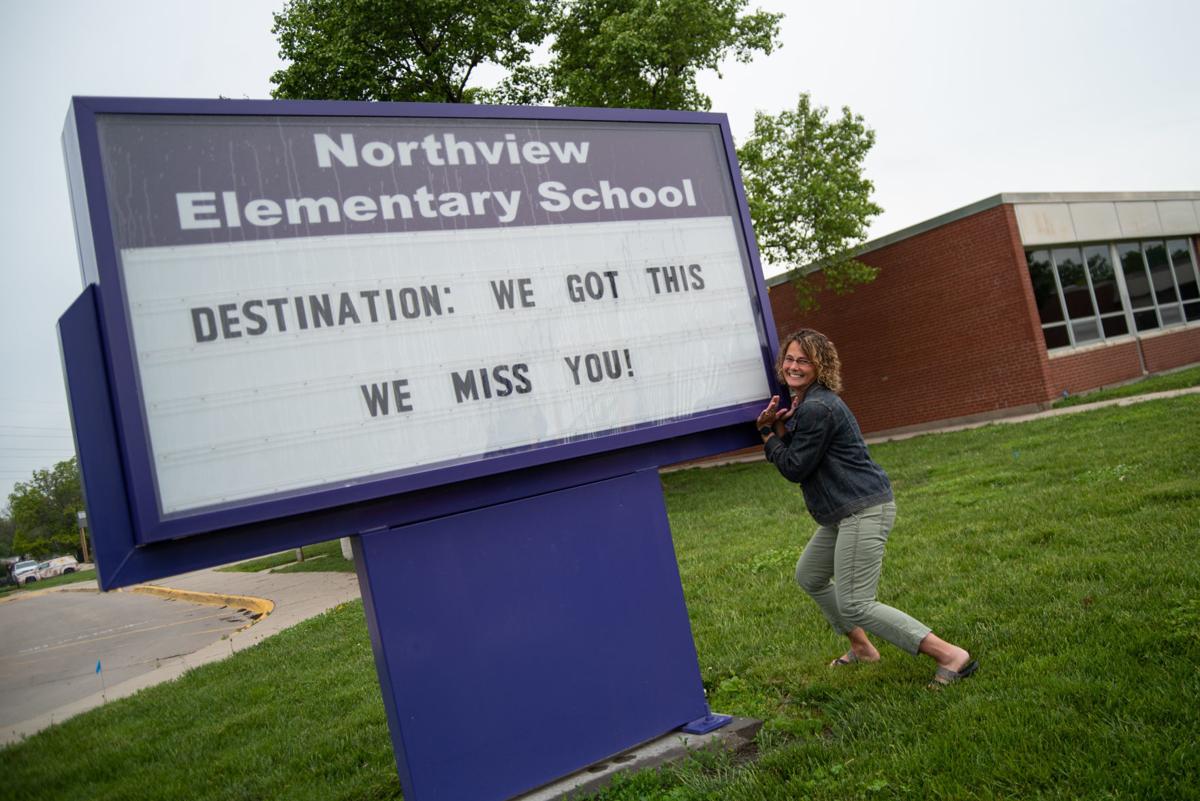 Cleion Morton acts like she is holding up the sign outside of Northview Elementary School on Friday.

Cleion Morton has been the principal at Northview Elementary school since 2014 and started her career in education more than 30 years ago. Morton is retiring with the end of the academic year.

Cleion Morton stands in the library at Northview Elementary School on Friday.

Cleion Morton acts like she is holding up the sign outside of Northview Elementary School on Friday.

Even all these years later, Cleion Morton, principal at Northview Elementary School, remembers the day her father took her out to a peony patch on their farm outside Junction City and leveled with her about who they were and what that meant for her future.

As a little girl, Morton, now 56, knew she had to be a teacher. When she was in sixth grade, she was paired with a first grader named Theta who couldn’t speak and who couldn’t write. It took Morton less than a year to get the girl — who likely had learning disabilities — to speak and even write and say her own name.

But to be a teacher, Morton would have to go to college. Her parents highly valued education, but neither had any education beyond their high school degrees, and the only thing her poor parents could give her would be a strong work ethic to put toward her schooling.

“Cleion,” Morton remembers her dad saying, “you know we don’t have any money, and you’ll have to get scholarships to go to college.”

Morton took those words to heart, and in becoming a teacher and later principal, she committed herself to always pursuing excellence and becoming better every day.

Now, three degrees (one a doctorate), several schools and 34 years of teaching later, Morton is preparing to retire from education, and after years of endlessly pursuing excellence, she may have finally reached it.

Morton always knew she wanted to be a teacher, but even when she was student teaching at Fort Riley junior high in the mid-1980s, her supervising teacher told her she might have a knack for being a principal. She brushed off that suggestion, because she couldn’t imagine herself in such a position, and she took a job teaching English and drama at Wamego junior high for 13 years.

Then, she decided to try her hand at being a principal, and when an assistant principal position opened at Eisenhower Middle School, Morton tried that for a few years. But she found herself yearning to go back to the classroom, and she went back to teaching. After experiencing both worlds, she decided she could still make a difference as an administrator, and she became a principal in the Alma-Wabaunsee school district before coming to Northview in 2014.

Throughout all of those career transitions, Morton said her experiences reaffirmed the fact that she could still be a teacher first, even in an administrative position.

“I think there are different kinds of administrators, and they all have value, but I’m definitely a teaching administrator,” she said. “I always tell my teachers that if I ever forgot what it was like to be on the front lines, then I needed to get out. I don’t feel like I got to that point, but I don’t think we can ever forget what it’s like to be a teacher and on the front lines.”

As a principal, Morton said she’s focused on being an advocate for teachers and making them believe that she will be there for them, that the principal position isn’t just “another feather in the hat” for her. In her role as a leader, Morton has tried to create a climate where people are the most important thing and positive intent is always assumed, and as a result of those efforts, she’s been able to create a school family at Northview.

The job can be tough, too. As principal, Morton is the head problem solver, the firefighter who puts out constant fires as they ignite around the school. She’s the one who deals with both families as they might struggle with problems at home or at school, as well as teachers or even substitutes who might need a friend or mentor.

But even through that, Morton said she tries to smile. At her first principal position, she said a student had asked her why she smiled so much if she’s a principal, and Morton realized she needed to help break the stigma people might have of the principal being a disciplinarian or a stiff bureaucrat.

Every year, she pushed her teachers, students and families to pursue excellence, just as she had for so long.

Over the years, Morton said the education field has changed, and that there are so many factors the schools don’t have control over. When she first started teaching, only three or four students in each of her classes came from non-nuclear family backgrounds. Now, the opposite is more likely.

Her own experiences with her daughters Allie and Katelin also taught her how each kid might need a different learning approach.

“That was my key, as I walked through school. It helped me to see kids differently,” she said. “They both worked hard, and they both have college degrees, but it helped me realize that kids need different things. What works for one might not work for the other.”

Additionally, technology has played a much bigger role in teaching students, and the COVID-19 pandemic is a prime example of that. However, Morton cautioned against relying on technology too much, and she likened the use of classroom technology to using a microwave.

“I could use a microwave to heat up a frozen corn dog, but I’m not going to use my microwave to fix a roast or...mashed potatoes and carrots,” she said. “I feel like technology is the same way.

But what hasn’t changed about education is the heart of it — preparing kids for their futures, even when those careers might not even exist yet in a rapidly changing society.

“Deep down, we still want to impact kids and prepare them for whatever their future might look like, and that they can be successful in whatever way they define,” she said.

The last day of school was bittersweet, Morton said, and a few teachers came by to say goodbye to students as they came through to the free meal drive-through at the school. Although the semester formally ended Wednesday, Morton’s last day on the job isn’t until June 12, and she’s only started to pack up some of the many student keepsakes and mementos in her office.

A ceramic penguin sits on a bookshelf, a gift Morton got about 15 years ago from a sixth grader in her class. The head (and feet, inadvertently) comes off, and inside are several slips of paper on which the girl had her classmates write things they valued about their beloved teacher. Even today, Morton pulls the jar out whenever she needs reassurance about the work she does.

In retirement, Morton will do nothing, she said, other than focusing continuing to focus on being a good wife, mother and now grandmother to five grandchildren.

“My identity for the past 34 years has been as a teacher and as an educator, but I think I’m so much more than that. I think I’m ready to find out what that brings,” she said.

Susan Lowman, a third grade teacher who’s been at the school since 1991, said she’s seen many principals come and go over the years. But in just six years, Morton pulled together a Northview community stronger than it had ever been. The teachers have come to know her as someone who always had their backs, and as someone who could get the best out of them, Lowman said.

And at the end of a long career, Morton may have finally found excellence.

“If anyone comes close to excellence, it’s definitely her,” Lowman said. “She reached that in many, many different ways. She always put people first as her strategy to get there. She’s just a giving, hard-working person, and she would never ask anyone to do anything she would not do herself.”