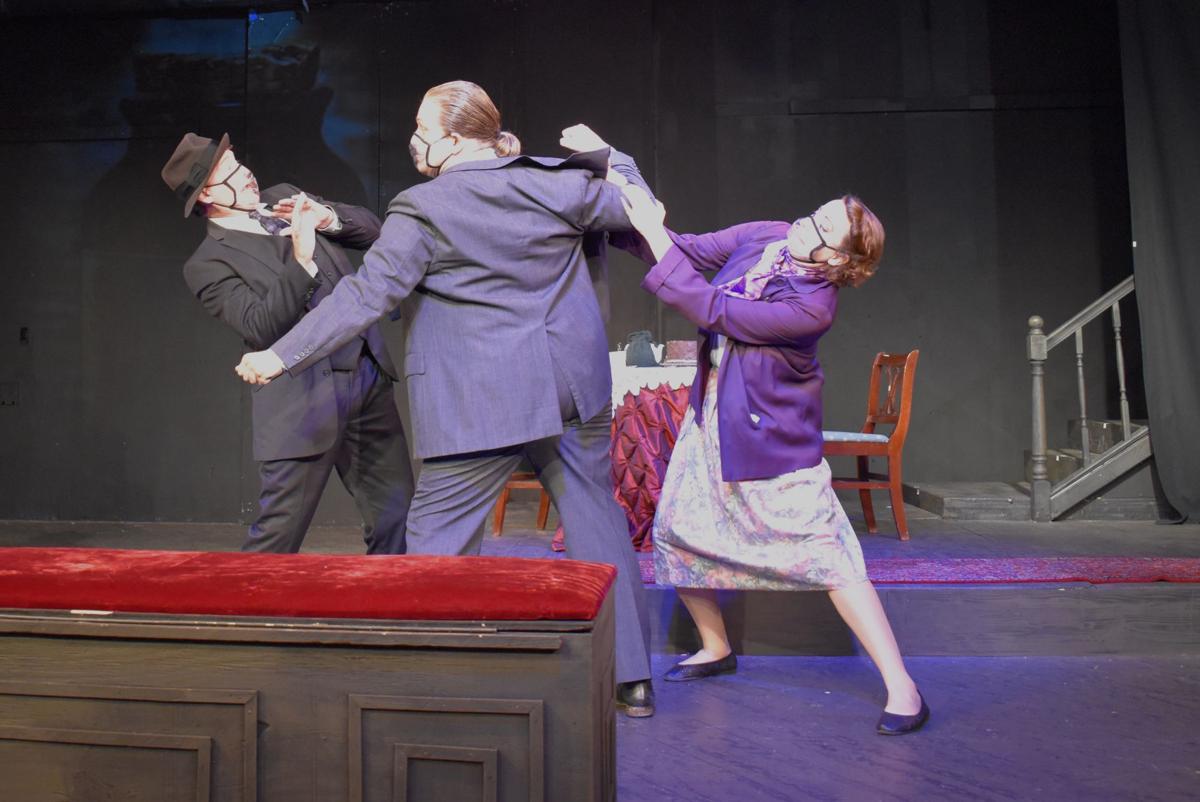 From left, Andrew Smith as Mortimer Brewster, Donald Davis as Jonathan Brewster and Alicia Willard as Dr. Einstein in “Arsenic and Old Lace” at Manhattan Arts Center Thursday. The show opened on Friday. 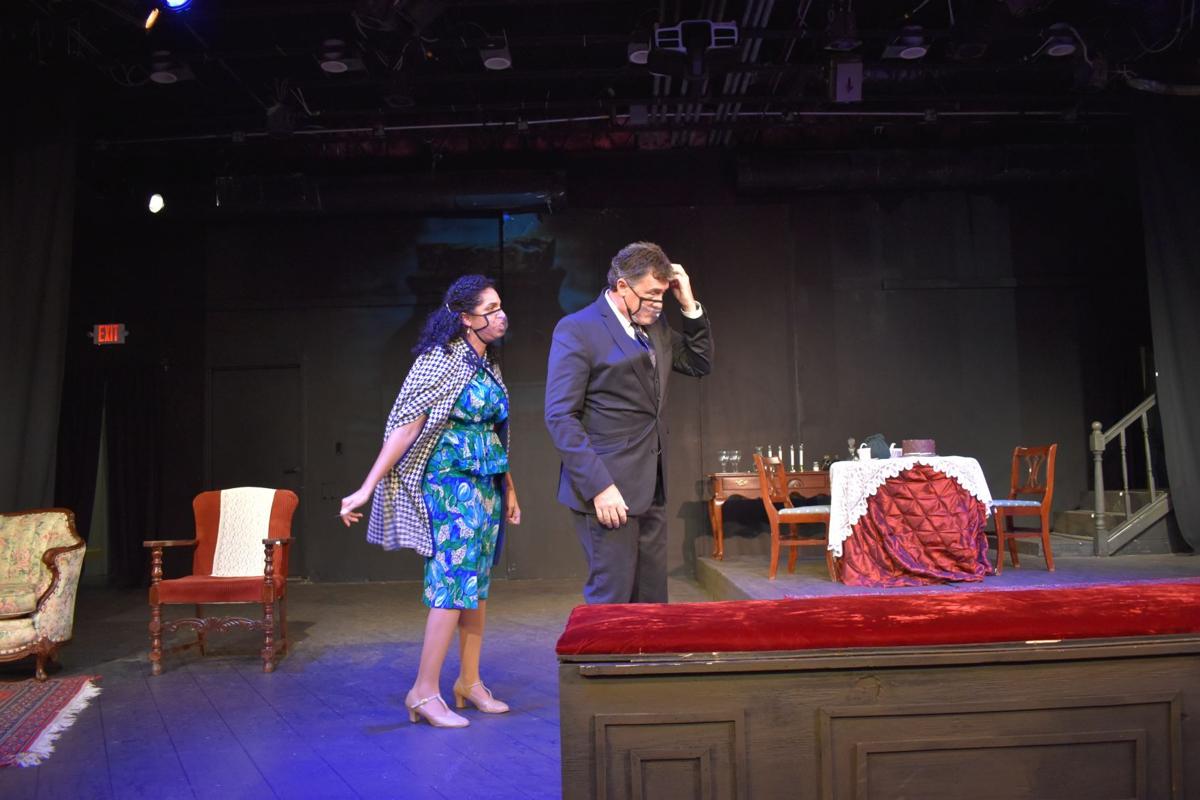 Suliel Sapp as Elaine Harper and Andrew Smith as Mortimer Brewster in "Arsenic and Old Lace." The couple's relationship is strained as Mortimer learns of his family's insanity. 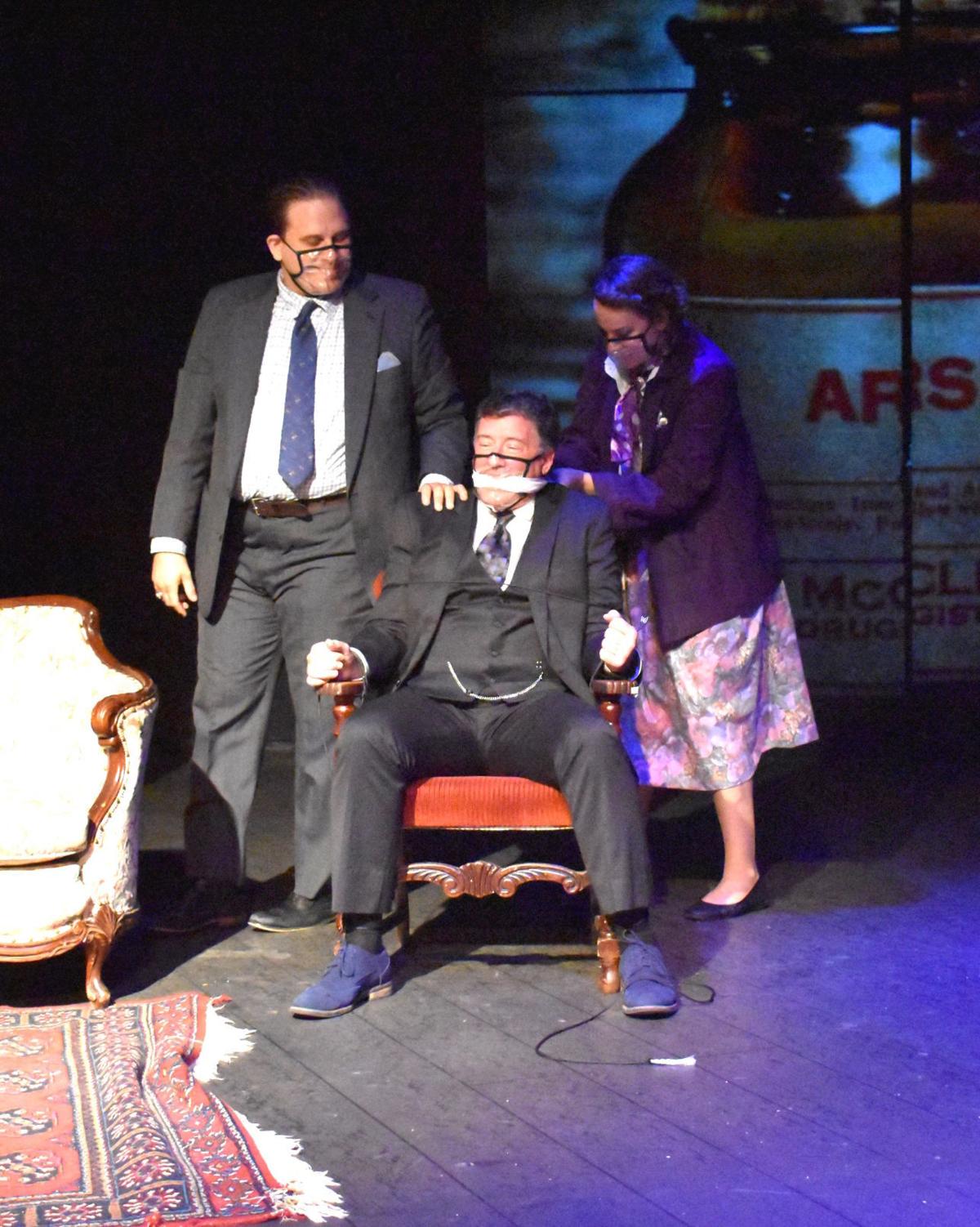 From left, Donald Davis as Jonathan Brewster, Andrew Smith as Mortimer Brewster and Alicia Willard as Dr. Einstein in “Arsenic and Old Lace.” Brothers Jonathan and Mortimer have a contentious relationship in the show. 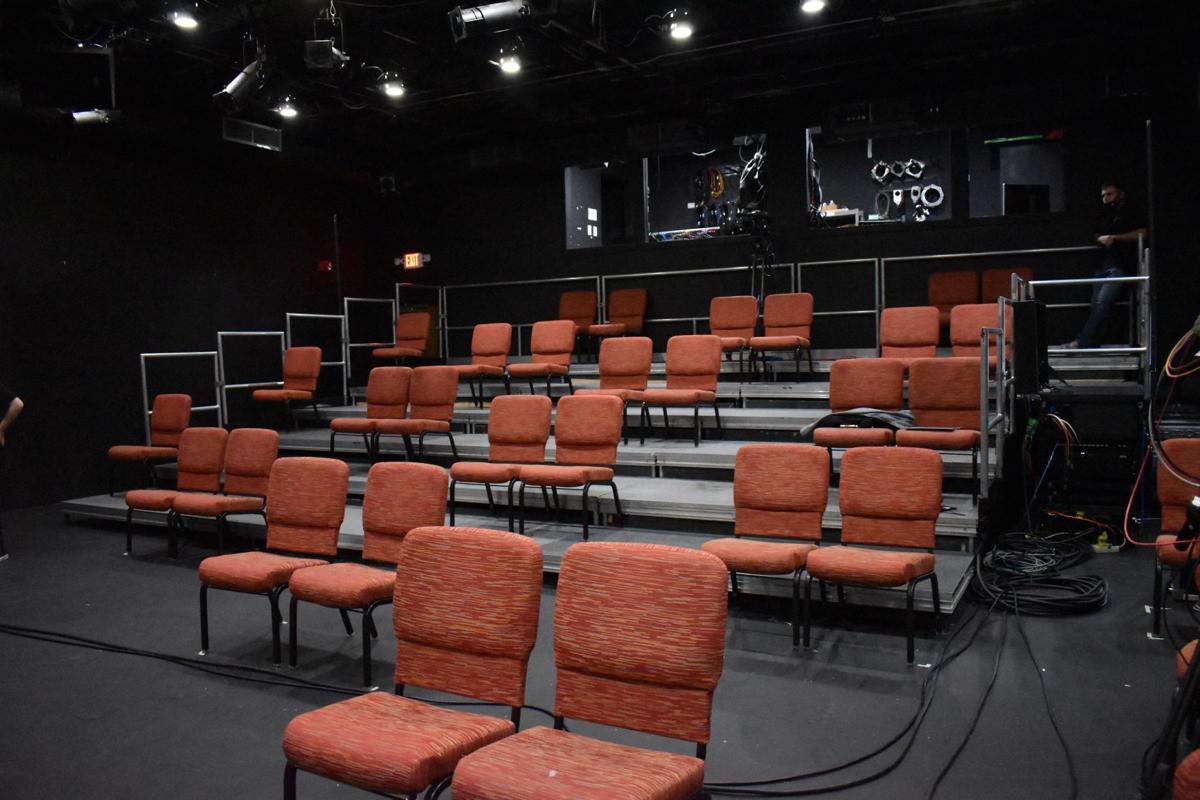 Most seats at Manhattan Arts Center were removed to allow for physical distancing in the theater. 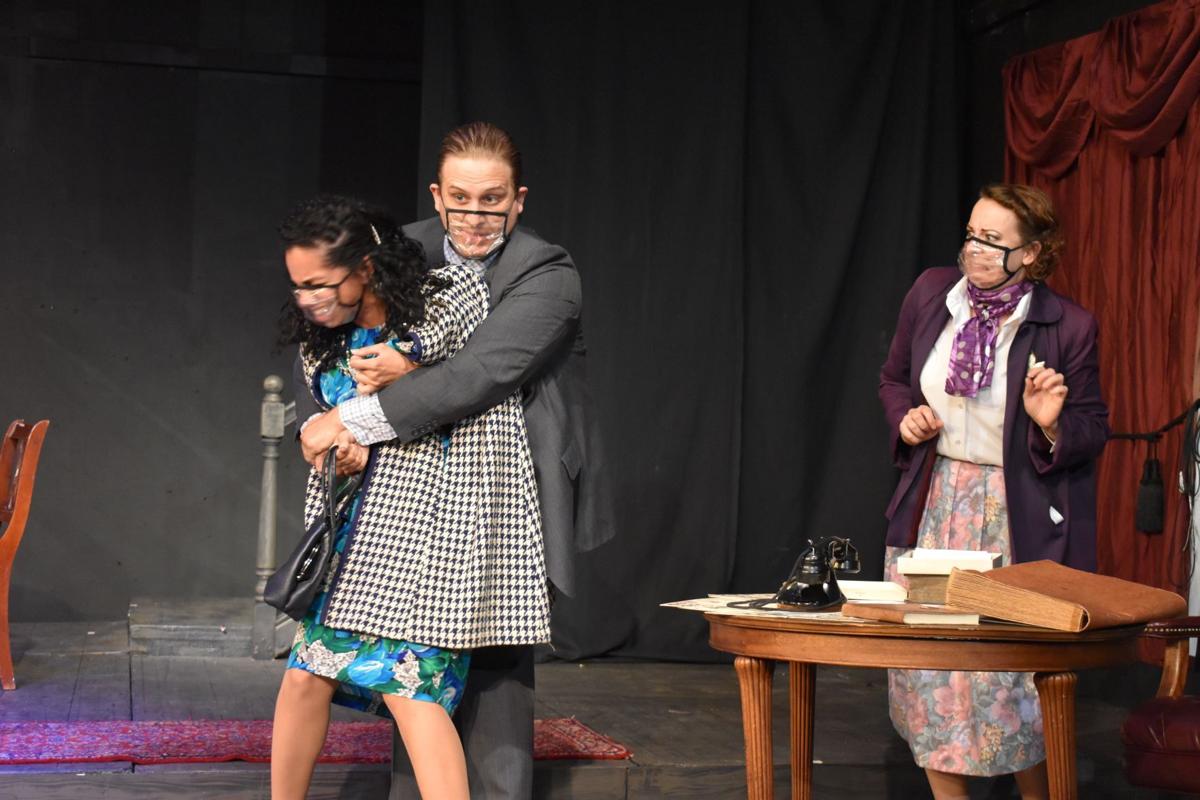 From left, Andrew Smith as Mortimer Brewster, Donald Davis as Jonathan Brewster and Alicia Willard as Dr. Einstein in “Arsenic and Old Lace” at Manhattan Arts Center Thursday. The show opened on Friday.

Suliel Sapp as Elaine Harper and Andrew Smith as Mortimer Brewster in "Arsenic and Old Lace." The couple's relationship is strained as Mortimer learns of his family's insanity.

From left, Donald Davis as Jonathan Brewster, Andrew Smith as Mortimer Brewster and Alicia Willard as Dr. Einstein in “Arsenic and Old Lace.” Brothers Jonathan and Mortimer have a contentious relationship in the show.

Most seats at Manhattan Arts Center were removed to allow for physical distancing in the theater.

Sometimes the world is so strange it’s hard to believe it’s real.

For Mortimer Brewster in “Arsenic and Old Lace,” which opened Friday at Manhattan Arts Center, the behavior of his family is so unusual he finds it increasingly difficult to tell the difference between reality and fiction. Director Penny Cullers said the surreal story is a good fit for a time that seems stranger than fiction.

“The year of 2020 reminds me of what Mortimer is going through,” she said. “It’s one disaster after another and trying to find the light in the darkness.”

In the dark comedy, Mortimer, a theater critic who is courting the minister’s daughter who lives next door, returns to the family home where his two aunts, Abby and Martha, still live. His brother Teddy also lives there and believes he is Teddy Roosevelt. Mortimer learns that his aunts are poisoning people, and another brother, Jonathan, returns having escaped from an asylum.

The original cast of “Arsenic and Old Lace” included Boris Karloff as Jonathan Brewster. The play was made into a film released in 1944 starring Cary Grant as Mortimer Brewster. In the 1920s, the playwright, Joseph Kesselring, taught at Bethel College in Newton.

Andrew Smith, who plays Mortimer in the MAC production, described his character as a drama critic “who doesn’t really like theater” and suddenly finds himself in a situation that unfolds like something out of a play.

“It’s almost as if he’s describing a play he sees as particularly terrible,” Smith said.

Mortimer can hardly believe his own eyes and begins to wonder if the events are really happening. Smith said he enjoys portraying the range of Mortimer losing control while also being the only one who can control the situation.

“He starts saying, ‘Have I gone crazy?’” Smith said. “When in fact he’s the only sane one.”

Nellie Bucholtz, who plays Martha Brewster, said the sisters’ murderous tendencies begin when they meet an old man they see as lonely and decide the most charitable action would be to kill him.

“We think it’s perfectly normal to help old gentlemen to their death because we don’t want them to be lonely anymore,” Bucholtz said.

Cullers said “Arsenic and Old Lace” makes for nice spooky piece to see as the Halloween season begins. She said the show makes jokes about things that wouldn’t normally be funny, which she said can be a kind of way to deal with darkness.

“We want to laugh at things that are too horrible to fathom otherwise,” she said.

That kind of humor is a natural fit for a play performed during a pandemic, when people are trying to find things to laugh at in the face of serious challenges. Cullers said those involved wear masks during rehearsals, sanitize surfaces and take their temperature upon entering the MAC. The cast will wear clear masks to allow their faces to be somewhat visible. Audience members must wear masks, and the theater was rearranged to allow for spacing. The seating capacity of the theater went from around 150 seats to 42.

Cullers said she sent a message about staying safe to the performers after they were cast. The group includes a wide age range, from college students to people in their 70s.

“Knowing we had that spectrum, I asked the actors to be careful,” she said. “I usually don’t have to do that.”

Smith knew firsthand the importance of taking precautions. He was the first confirmed case of coronavirus in the Manhattan area and was hospitalized for around a week with the illness. He said he wanted to get back on stage in part because he remembered what brought him joy when he was sick and wanted to try to do that for others. The pandemic has taken a physical toll, he said, but also has taken a psychological toll.

“Being one who had to fight through this, I know the things that helped me,” Smith said. “The psychological piece is important.”

Cullers said that during this time of isolation, people are craving human connection and the arts provide that.

“When you’re an actor, what you live for is people,” Cullers said. “And for an audience member, there’s nothing like live theater. It’s different every single night and there’s a passion you can see and feel.”

Smith said he hopes they can give a piece of normalcy and something to laugh at during a difficult period to make it just a bit easier.

“If we can alleviate that by giving people the opportunity to smile, I want to be a part of it,” he said.

‘Arsenic and Old Lace will be performed Sunday and Oct. 2-4. Performances begin at 7:30 p.m. Friday and Saturday and 2 p.m. Sunday. Tickets are available at Manhattan Arts Center, online at manhattanarts.org or by phone at 785-537-4420. Tickets are $17 for all seating and $10 for military, students and children. An on-demand video option will be available beginning Tuesday through Oct. 4. Rental is $10 plus fees.