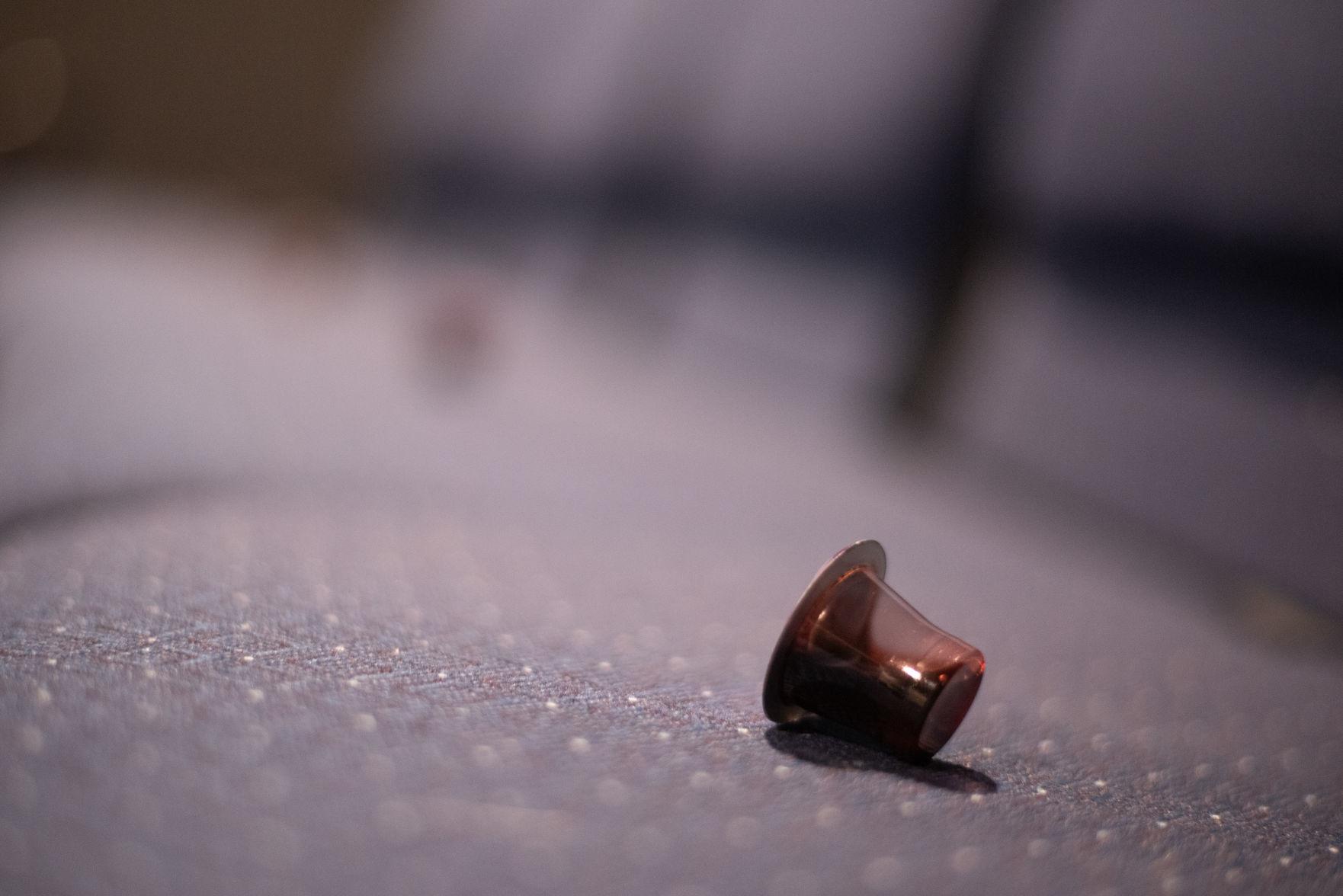 A pre- filled communion cup sits on each chair at the church. 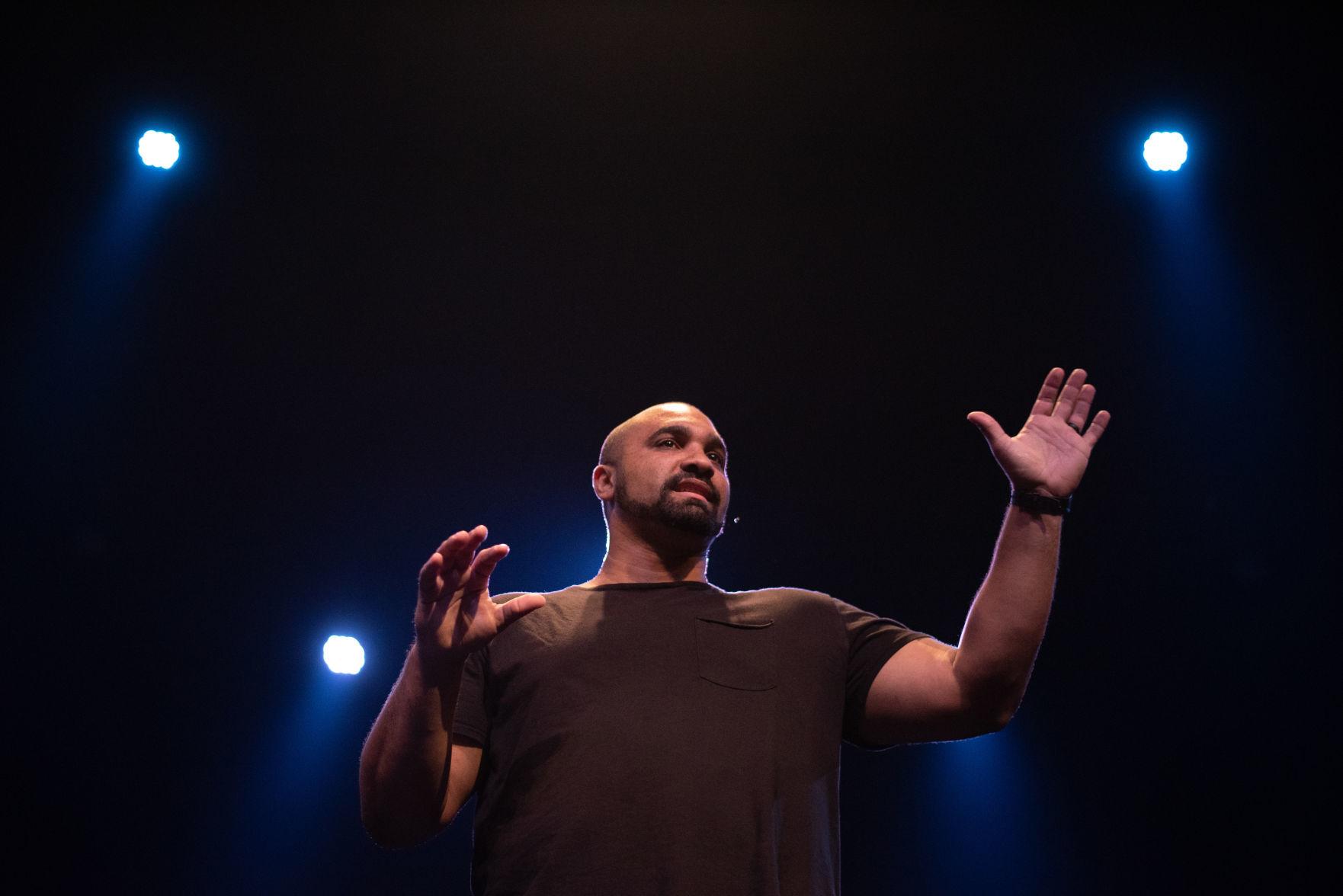 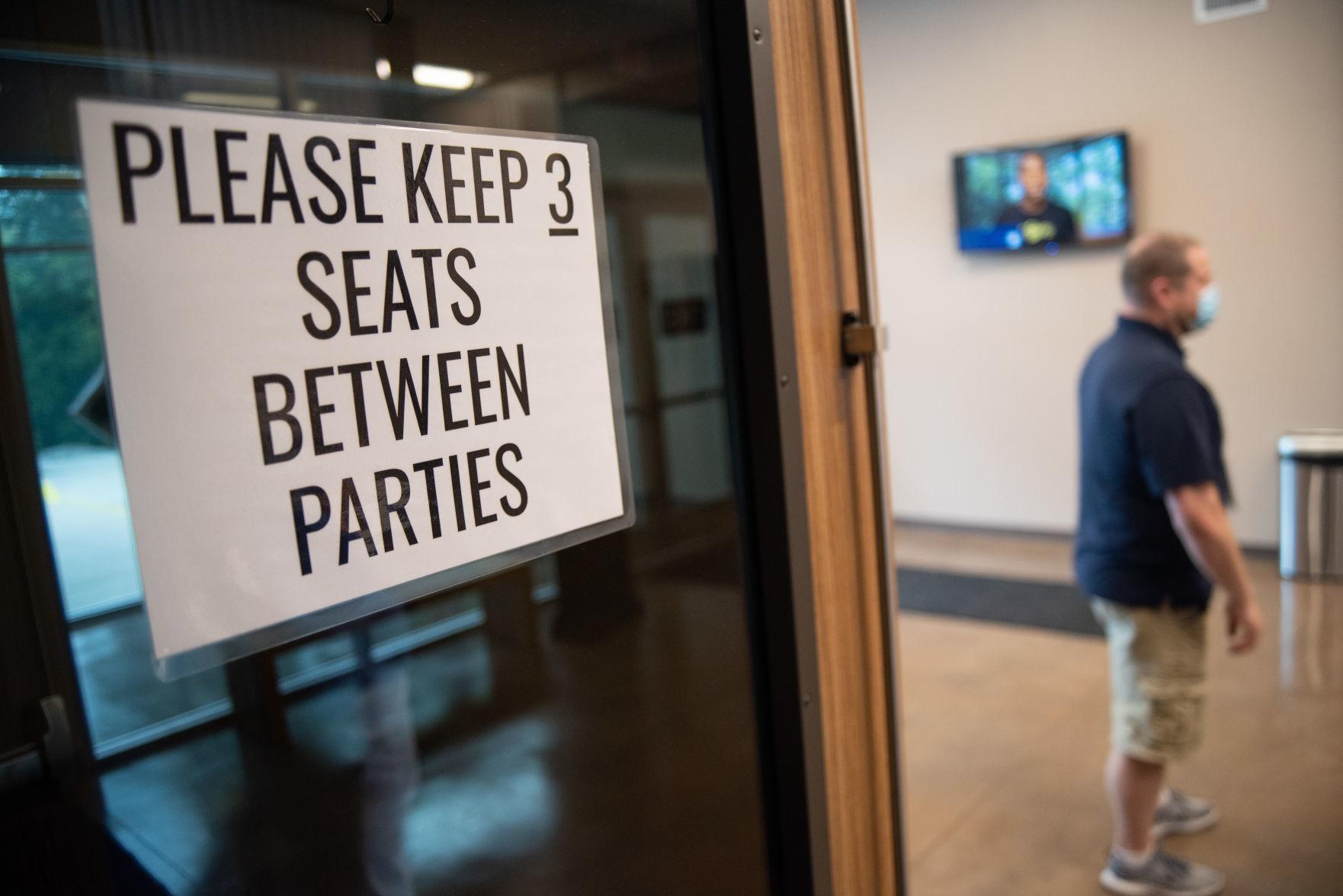 A sign reads, “Please keep 3 seats between parties,” at the church on Sunday. Like many local churches, UCC has taken a number of measures to prevent the spread of coronavirus at its services.

Gloria Freeland sits in her office inside Kedzie Hall on Wednesday. Freeland recently retired after 37 years in the A.Q. Miller School of Journalism and Mass Communications at K-State.

Gloria Freeland is a member of the Riley County Historical Society and has served in several officer positions in the group.

A passion for history and telling stories about people tied everything together for Gloria Freeland as a professor and journalist.

“We can just be utterly fascinated with anybody’s history really,” she said. “Everybody has a story. ... We just love to kind of unearth those various stories.”

Freeland, a K-State alumna who graduated in 1975, recently retired from her position as a professor for 37 years in the A.Q. Miller School of Journalism and Mass Communications at Kansas State University.

“It was really fun,” she said about working at K-State. “When I first started working there, it was kind of strange because I was working with former professors.”

“I’ve obviously enjoyed it or I wouldn’t have stuck around for 37 years,” she continued.

While at K-State, Freeland enriched her students with her extensive journalism knowledge, but also taught them about history.

“I tried to reinvent myself every semester,” she said. “So that the one semester they were doing lost towns in Clay County, another semester they interviewed World War II veterans or people who served on the home front.”

Freeland, 66, who was the coordinator of internships at the school, said the beloved part of her extensive teaching career included working one-on-one with her students.

“I really enjoyed the first news and feature writing class because I was sort of at the beginning of my students’ career,” she said. “And then doing the internships, I could see them come through and it was toward the end of their academic career, and I always enjoyed seeing how they grew over that year or two after taking more courses.”

Freeland said her departure and retirement from K-State felt strange because of the coronavirus pandemic.

“Kind of a surreal, weird ending to a 37-year career,” she said.

She said she is thankful for K-State giving her a home away from home.

Right now, Freeland and her husband, Art Vaughan, are writing a book about the relationship between Morganville, Kansas, and Fèves, a town in France. The couple married in 1988.

“That’s our current project, working on this book,” she said.

“It was just kind of special because the town had gotten together and they had a pageant complete with a play performance in the summer of 1948 that people from miles around came to it,” Freeland said.

The play was called “Message to Fèves,” Freeland said, and it told the story about how Morganville came to be, detailing historical events such as droughts and floods.

“They were reaching out their hand to this little town in France, Fèves,” she said.

Freeland’s husband is a historian and joins her in a love for history.

“He’s a bulldog when it comes to getting information,” Freeland said about her husband.

Freeland and her husband have visited France several times.

Vaughan reached out to Fèves to see if anyone remembered Morganville. After a few unsuccessful attempts, they finally got ahold of someone.

“Well, it turned out that one of the people that worked in the mayor’s office, his son from Houston was there and he saw Art’s email and translated it,” she said. “And it turns out that the man who was interested actually remembered receiving aid from Morganville. He would have been seven years old at the time. He’s in his 70s now.”

Freeland is a member of the Riley County Historical Society, serving in several positions, such as president, vice president and director, over her tenure.

This makes for a good combination, Collins said. She said Freeland is special in the fact that she is so dedicated to telling history. Collins said she is grateful for her hard work and dedication to the museum and historical society.

“She’s a great person and continues to work in local history,” she said.

Pat Hudgins, associate director of the career center at K-State, considers Freeland an “amazing friend” and colleague. They first met back in 1989.

“She’s one of the friends ‘til the end type of people,” she said.

Hudgins said Freeland is a person who gives the greatest advice and helps people consider all the different perspectives of various things.

Prior to teaching at the university, Freeland had a stint as a volunteer in the Peace Corps in Ecuador in 1976. She also was a reporter, speaking English and Spanish, at the San José News in San José, Costa Rica, in 1978. She eventually became co-manager of the newspaper.

In Costa Rica, she met her first husband, Jerome Johanning, in 1979. He worked for the Wichita Eagle. Freeland later worked at the Clearwater Times after the couple married.

Freeland came back to K-State in 1981 to get a master’s degree in business. She started working at Student Publications, which is now called the Collegian Media Group, after getting her master’s degree.

Unfortunately, Johanning passed away in 1986 after suffering from a brain aneurism. Freeland was pregnant with their daughter, Mariya.

“So it was a really hard time for me, obviously,” she said. “Had a lot of support from family and friends, and so that kind of got me through that.”

Vaughan and Freeland have another daughter, Katherine. Vaughan has a son and daughter from a previous marriage.

In addition to history, Freeland enjoys photography and traveling as hobbies. She said she enjoys taking pictures of people and nature scenes. Freeland writes Kansas Snapshots as well. Herlatest column discusses her departure from K-State.

“It usually has a personal touch,” she said.

She said she discovered her love and passion for writing as a youngster. Freeland liked writing poetry and was a 4-H reporter. She was the editor of her high school newspaper as well, she said. 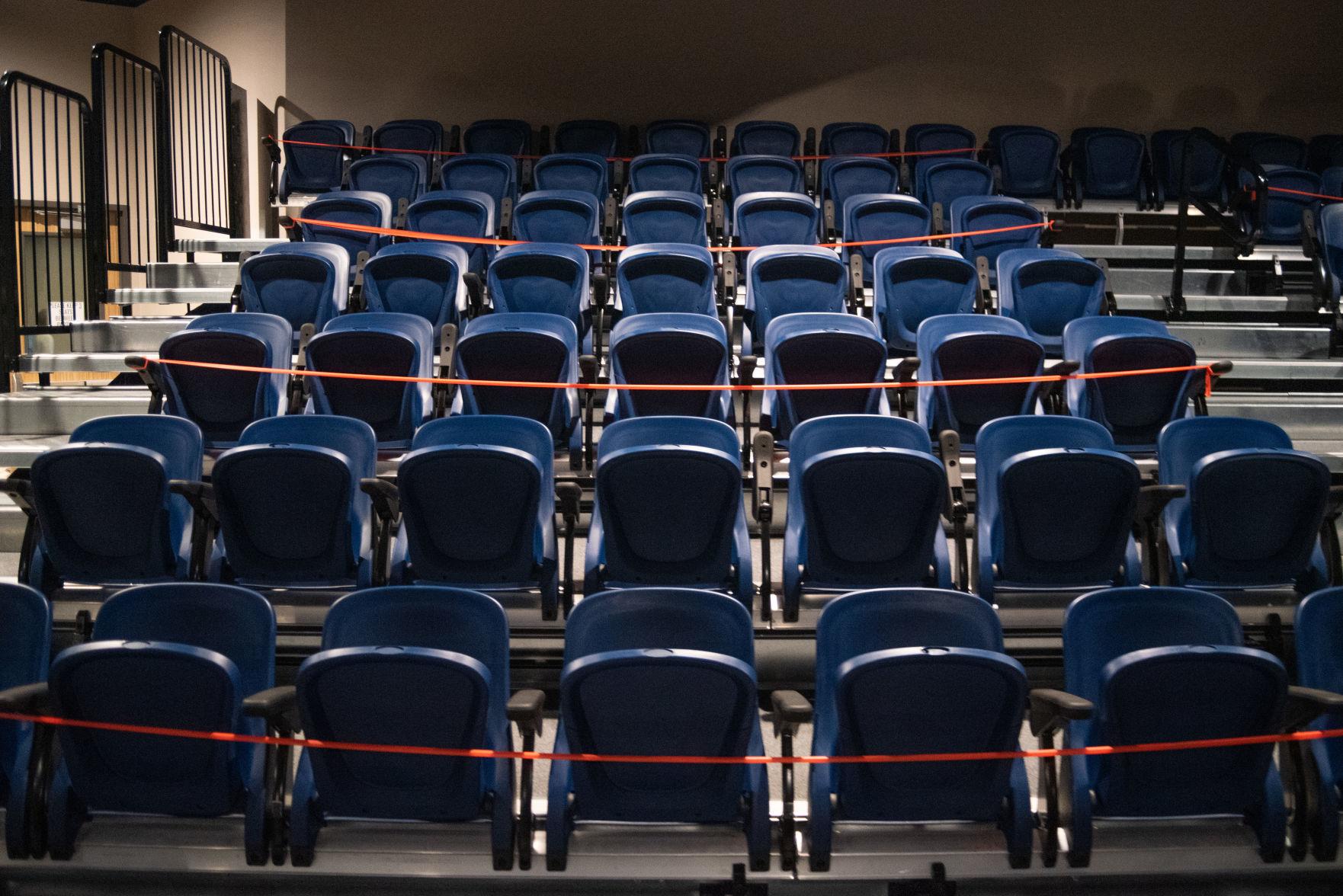 Orange tape helps to keep groups from sitting too close to one another in the balcony level of the church.

Riley County on Tuesday reported 44 new cases of the coronavirus since Friday, one of the largest jumps since the beginning of the pandemic, as Riley County commissioners on Monday opted out of a statewide mask order.

The total number of cases in the county is 317. Of those 145 cases are active, 169 are recovered and three people have died after testing positive.

Gibbs said she wasn’t surprised that the commission decided to opt out of the executive order. She said she knew about some of the commissioners’ thoughts and feelings prior to the decision Monday.

“I wasn’t entirely surprised by that, and it is our understanding that the city will look at that ordinance and vote on that,” she said Monday.

County commission chairman Marvin Rodriguez said he wanted to opt out because he thought the governor’s mandate was government overreach.

Rodriguez asserted more people have died from the flu than the coronavirus this year and said it is “not right” to force people to wear masks.

“It is not right that the people are ordered to do that when there is more people dying of the normal flu,” he said.

The commission voted on opting out of the mask requirement during a part of the meeting called “commissioner comments.” The item was not listed on the commission agenda Monday.

Riley County Counselor Clancy Holeman said the commission was allowed to approve the motion despite the issue not being on the agenda. Holeman said the county had to come up with specific reasons for opting out of the executive order.

The other two commissioners, John Ford and Ron Wells, decided Thursday to not take any action until they saw what the Manhattan City Commission would do at its meeting this Tuesday. A majority of city commissioners previously expressed support for a mask mandate in the city. By not taking action, county commissioners allowed the governor’s mask mandate to take effect Friday.

Ford was wearing a mask at the meeting Monday. Wells and Rodriguez were not. They made no comment on their own choice not to wear masks.

Wells and Rodriguez indicated they think the risk of the coronavirus is low in rural areas of the county, so they felt like masks did not need to be mandated in those areas.

Wells said he made the motion because it is likely the city will enact a mask mandate.

“I feel that the risk in rural and Riley County is relatively low, is for my reason for making the motion,” Wells said.

“Across the county, our number of (fireworks) calls were down from last year, but our damage was a lot higher,” he said. “Normally, the calls we run are grass fires or field fires.”

Just north of town, Collins said a 2008 Jeep Liberty was “burned up” after a carload of fireworks ignited inside the vehicle, which was parked outside.

“I think the heat coming through the windows is what appeared to (cause the fire),” he said.

The other, which occurred in Ogden, was canceled prior to fire officials arriving after residents put out the fire. Collins said there was minor damage to the car.

Collins said there also was a grass fire that also happened Saturday at Scenic Overlook, south of town. He said the fire didn’t get too bad because it hasn’t been dry recently.

“We’ve had some dry years where we’ve had a lot of (grass) fires,” he said. “We get 15 days of dry weather right up to the Fourth of July, and we’d have some bad fires. But they are far and few between.”

Collins commended the county’s volunteer firefighters for their work during the Fourth of July weekend. “They’re a great bunch of people,” he said.

The Manhattan Fire Department responded to five fireworks-related service calls from Wednesday through Sunday, down four from about the same period in 2019.

All of them were small dumpster fires that occurred on Saturday or Sunday in the late evening and early morning hours. Estimated property losses ranged from none to $250.