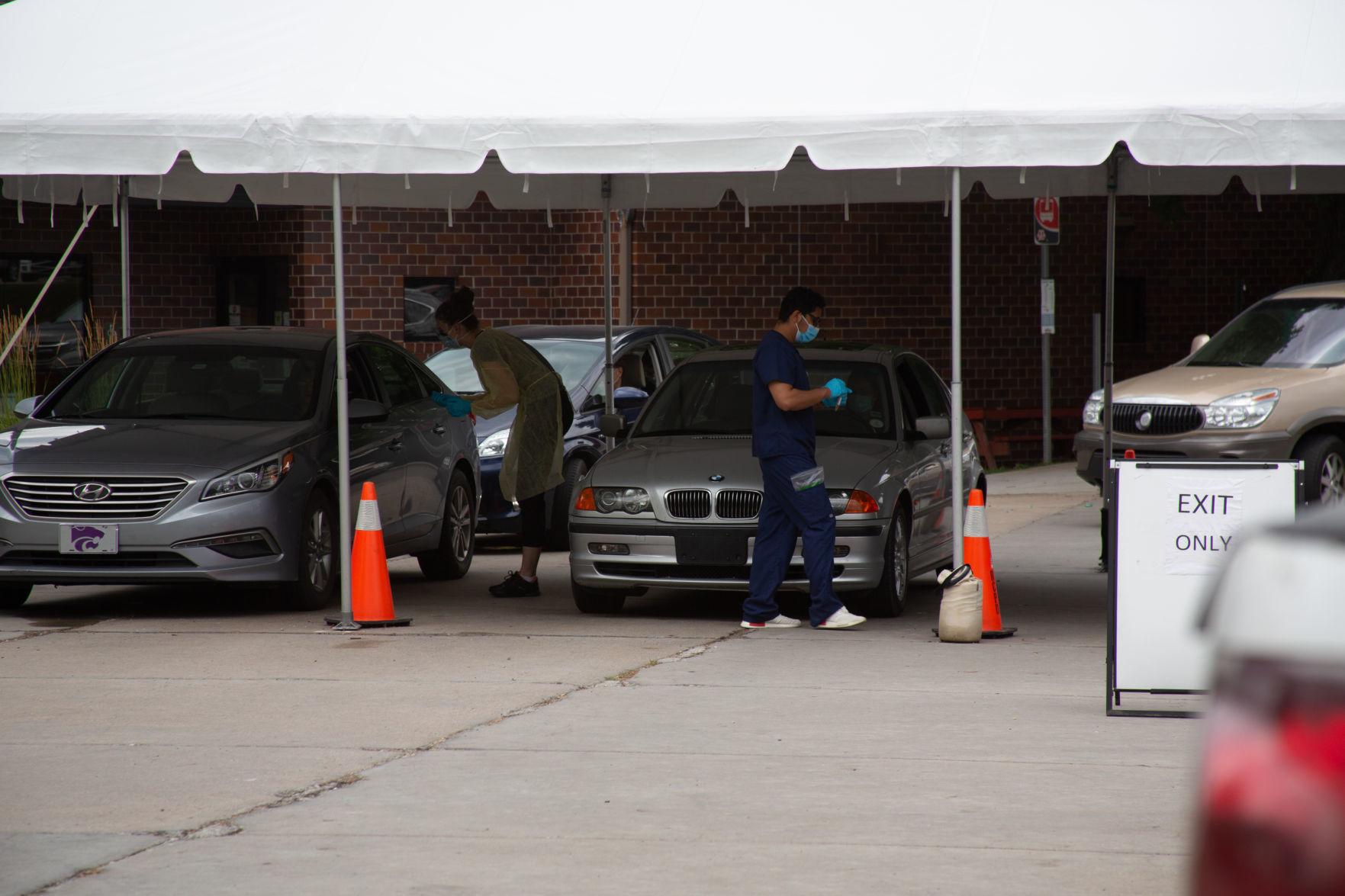 Cars pull into the drive-in COVID-19 swabbing station at Riley County Health Department on Friday. A doctor on the MHK Clinical Task Force says the swabbing station and local primary care doctors are swamped with people wanting to get tested for the virus following a spike in local cases in the past two weeks.

“And while (Ascension Via Christi CEO Bob Copple) and the hospital may not be pegged out on capacity in terms of beds or ventilators or ICU care, I can just tell you from the primary care standpoint, we are already being pegged out at capacity, and this is just what I call the tip of the iceberg in terms of what could happen through the fall and the winter,” Ryan Knopp, who is part of the MHK Clinical Task Force, a committee of medical professionals who meet regularly to talk about the response to the pandemic.

Knopp, a partner at Stone Creek Family Physicians and at the K-Stat Urgent Care Center, discussed the situation during the Manhattan Area Recovery Task Force meeting Thursday afternoon. He’s also a member of that task force which is an inter-agency group created in response to the pandemic.

“Our K-Stat Urgent Care clinic has literally been overwhelmed with need for swabs,” he said.

Knopp said he expects the numbers to continue to rise locally. He said the supplies at the respiratory tent, in terms of capacity and resources, have “absolutely been exceeded.” He said he helped with swabbing Wednesday and it was busy with cars coming one after another.

The respiratory tent and swabbing station is managed by the Konza Prairie Community Health Clinic staff along with medical volunteers across the community. It is in the Riley County Health Department parking lot.

Knopp alluded to the rise in cases over the last few weeks in Riley County. He said he and other doctors saw this spike prior to the positive numbers coming in.

“We in primary care see that before anybody because we’re fielding the phone calls of sick patients, exposures, far before the positive numbers and tests come in,” Knopp said. “So we sort of saw this coming a week or two ahead of time.”

Officials said if a person wants to get tested, they must have a referral from a doctor. People are usually allowed to get tested if they have at least two coronavirus symptoms or are a close contact of someone who has tested positive for the virus.

If people do not have a primary care doctor, people are encouraged to call Konza, officials said.

Uccello said there is no charge to patients for testing at the swabbing station.

Stomp, the percussion group known for making music with everyday items, performs at McCain Auditorium at Kansas State University in January 2019. McCain Auditorium is cancelling its fall 2020 performance series as a result of the pandemic.

“It was a heartbreaking decision erasing up to two years of planning,” Holmberg said. “McCain Auditorium, in weekly consultation with university officials, felt that the guiding principle should be the safety of our students, staff, artists, volunteers, and patrons.”

Holmberg said McCain is working on rescheduling as many fall shows as it can to the fall of 2021. There are no plans yet to cancel spring semester shows, Holmberg said, but the auditorium will only host shows if pandemic conditions, and university and health officials, allow them to proceed.

The auditorium had not yet announced its 2020-21 performance schedule, and no tickets had yet been sold. Holmberg said auditorium officials had been putting off any ticket sale announcements until it was certain shows could go on.

Holmberg said the silver lining in this is that the auditorium has only had to cancel two shows for which it already had sold tickets: Piff the Magic Dragon and Kool & The Gang. Auditorium officials are hopeful they can reschedule those shows for spring 2021.

“These cancellations may affect the financial stability of McCain,” Holmberg said. “However, we have cash reserves we have been saving for a rainy day, and will need those reserves and more to fully survive as a result of zero to limited ticket income.”

Holmberg said he is optimistic that McCain can weather the storm of these cancellations and come out stronger on the other side. Looking past the fall, Holmberg and his colleagues are waiting for guidance from health officials.

“We are internally studying scenarios where small scale events might happen inside the building with limited capacity, social distancing, sanitation, and other safety COVID-19 protocols in place,” said Holmberg.

“We know we will have to pivot, we just don’t know yet how we will deliver our mission to the campus and the community.”

The second-floor entrance to K-State’s Hale Library, which has been remodeled following a fire in 2018.

K-State will reopen Hale Library’s second floor on Wednesday for the first time since the building suffered extensive fire, smoke and water damage in May 2018, officials announced Friday.

The library initially will resume offering services between 8 a.m. and 5 p.m. Monday through Friday. Those services will include the IT help desks, printers, computer stations and study seating, but students will not be able to check out equipment. Course reserves will be available but will be subject to a 72-hour quarantine period when returned, officials said.

Library visitors will be required to wear masks, per university policy, and only the second floor entrance will be open initially.

Staff also ask that visitors follow social distancing policies throughout the second floor, and staff will space out furniture and restrict the number of available computers and printers.

Small materials like staplers and dry erase markers will be removed, and equipment will be cleaned frequently.

Approximately 85% of Hale Library suffered damage in May, 2018 when an attic fire spiraled into a campus disaster. Library officials have worked for two years to remodel. Officials plan to reopen the third and fourth floors of the library with the start of the 2021 spring semester.

Gibbs said of those, 109 are active cases, 72 have recovered and there have been three deaths. She said the county is waiting for results on 159 pending tests.

Officials said Ascension Via Christi hospital in Manhattan has one positive coronavirus patient and one person under investigation for the virus.

The Kansas Department of Health and Environment (KDHE) has reported 13,538 cases, 1,128 hospitalizations and 264 deaths statewide Friday.

That is up 568 cases, 46 hospitalizations and three deaths from Wednesday.

The carnival is not coming to the Riley County Fair this year.

“It’s a combination of various things,” he said. “It’s just not going to be feasible.”

A lot of things are still up in the air regarding the fair, Fike said. Staff members will meet Monday to discuss the fair plans more, Fike said.

The fair, which begins July 23, will implement social distancing and provide masks to 4-H judges and members. Members of the public will have to provide their own masks, but masks are optional at this time, unless the Riley County Health Department requires masks in the future.

The livestock shows and other exhibits are still planned for the fair this year. Judges plan to maintain social distancing of six feet while judging exhibits at the fair. Because the carnival is not coming, Fike expects fewer food vendors to come, he said.

Junior Michael Duncan of Topeka holds a sign during the protest against Turning Point USA in April 2019.  A new group — America First Students, formed from the remains of the since-disbanded Turning Point USA chapter at K-State — has been accused of being a spearhead for a resurgence in white nationalism in the U.S.

K-State is reviewing its options in response to what it called “offensive” tweets from a student, university president Richard Myers said Friday morning.

Myers said the university is reviewing its options after Jaden McNeil, sophomore K-State student and founder of the conservative group America First Students, on Thursday tweeted “Congratulations to George Floyd on being drug free for an entire month!” Thursday marked a month since Floyd died after Minneapolis police knelt on his neck, preventing him from breathing. Floyd’s death sparked nationwide protests against racial injustice.

“The insensitive comments posted by one K-State student hurts our entire community,” Myers said. “These divisive statements do not represent for the values of our university. We condemn racism and bigotry in all its forms. We are launching an immediate review of the university’s options. Black Lives Matter at Kansas State University and we will continue to fight for social justice.”

Myers’ statement the strongest-yet statement from university officials, who have been reluctant to delve into what they’ve called a freedom of speech issue.

Student calls for the university to expel or discipline McNeil grew in early June during his earlier comments on the Black Lives Matter issue but exploded after McNeil’s tweet Thursday.

Students released a video last week under the #BlackAtKState hashtag and asked for America First Students to be removed from campus.

McNeil, who was the subject of an investigative report from an advocacy organization accusing him of being a white nationalist in February, did not respond to the Mercury’s request for comment Friday.

McNeil previously stated he is not a white nationalist and “(America First Students) is a mainstream, Christian, conservative organization that supports President Donald Trump.”

Vice president for student life and dean of students Thomas Lane tweeted Friday morning K-State condemns the bigotry and “racism” and said it is not tolerated.

“I’m aware of the Twitter posting by a K-State student,” Lane said in his tweet. “The lack of basic decency and care for how this post would impact others, especially our Black students, faculty, & staff already emotionally hurting from recent incidents of anti-Black violence is shameful and appalling.”

Following McNeil’s tweet, three K-State football players said they won’t play until McNeil is reprimanded and removed from the university.

The players were wide receiver Joshua Youngblood and defensive back Walter Neil Jr., though Youngblood has since removed his tweet. Athletics director Gene Taylor said in a tweet that the comments from McNeil “are disgusting and totally inappropriate and not reflective of who we are as a University or our Athletic Department.”

If K-State were to take any action against McNeil, it would be its first foray into disciplining a student for speech.

While the university’s code of conduct prohibits conduct that interferes with others’ ability to receive an education, telephone and internet harassment, interfering with the free speech rights of others, and violating local, state and federal laws, it does not explicitly ban speech like McNeil’s, which has been called hateful but not been directed toward any individual student.

K-State has previously won nods from the Foundation for Individual Rights in Education, which gave K-State its “green light” rating for free speech.