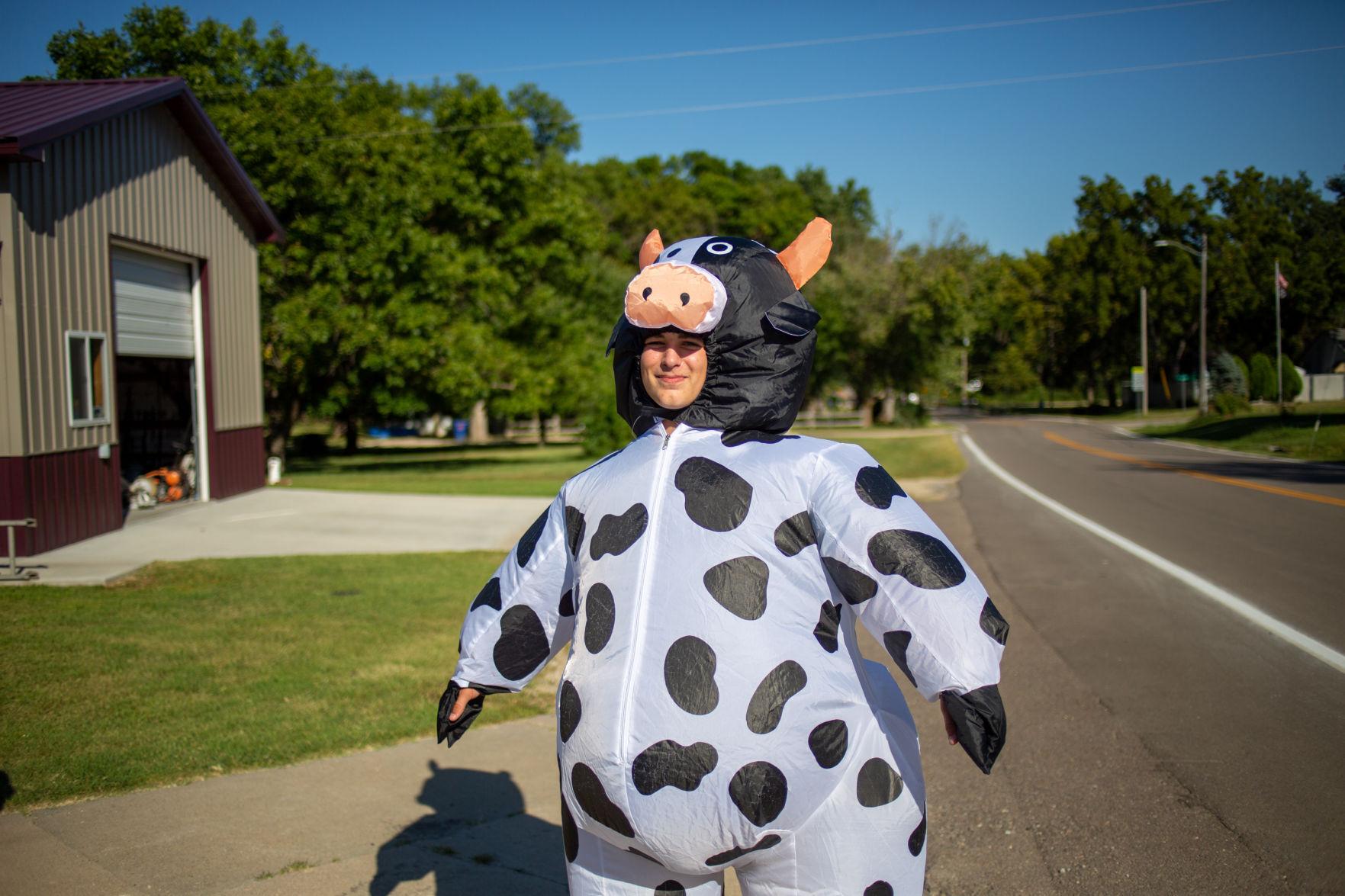 Bradley Owen walks down Kansas Avenue in Riley on Thursday. Owen dressed up in a cow costume to belatedly celebrate his best friend Arlie Headley’s birthday, which was Aug. 28. 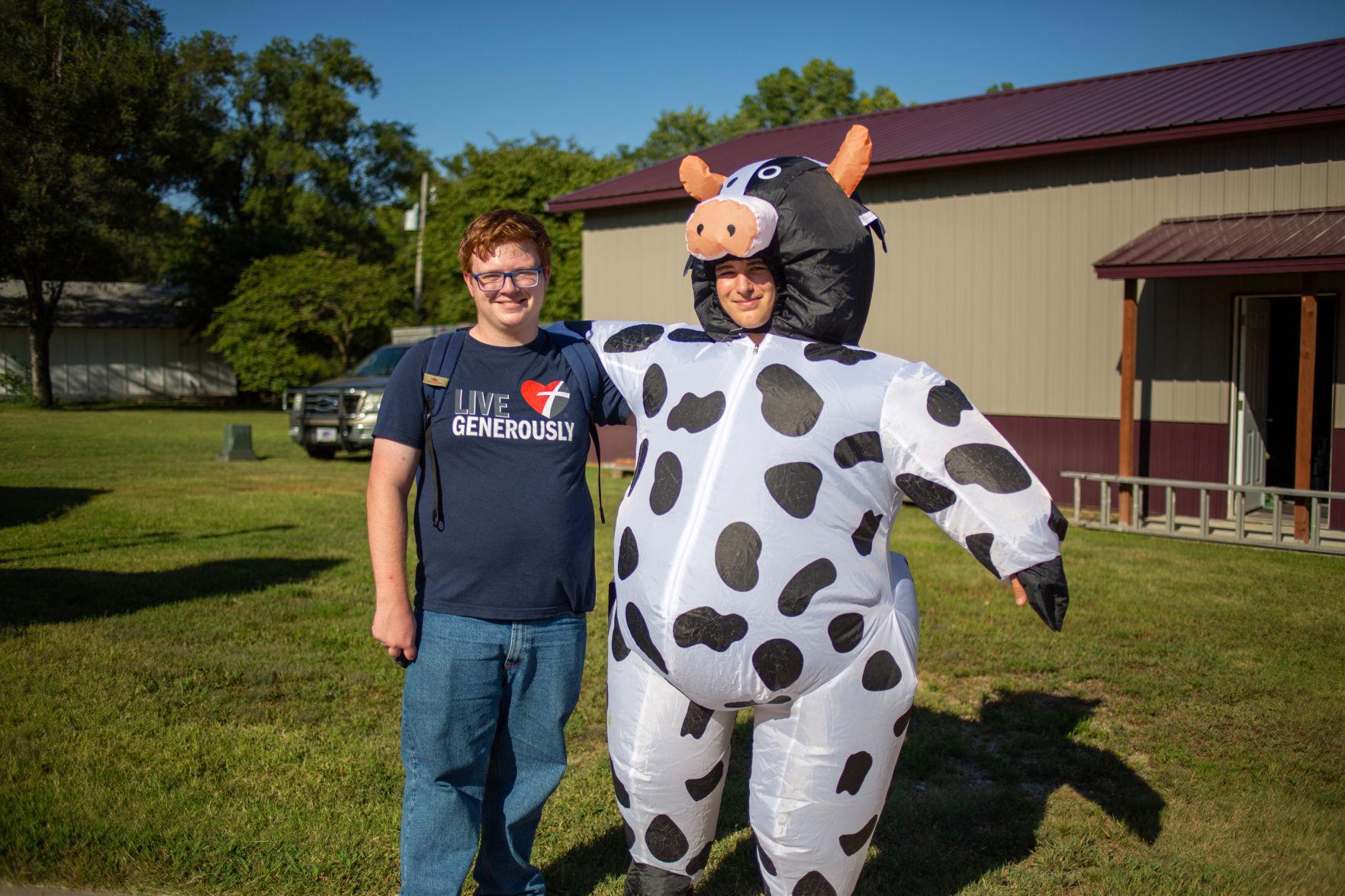 Those who go will drive up, get tested and receive free food.

People do not need to make an appointment, but are asked to wear masks. People can come if they do not have coronavirus symptoms.

The first testing event is planned from 7-10 a.m. on Sept. 9 at the Manhattan Town Center in the northwest parking lot.

Animationland, an exhibit exploring the art and science of animation, is coming to the Flint Hills Discovery Center. The temporary exhibit opens Sept. 19 and runs through Jan. 3, 2021.

“I believe this fun and interactive exhibit will encourage all ages to learn more about the fun of animation and the world of storytelling,” said director Susan Adams. 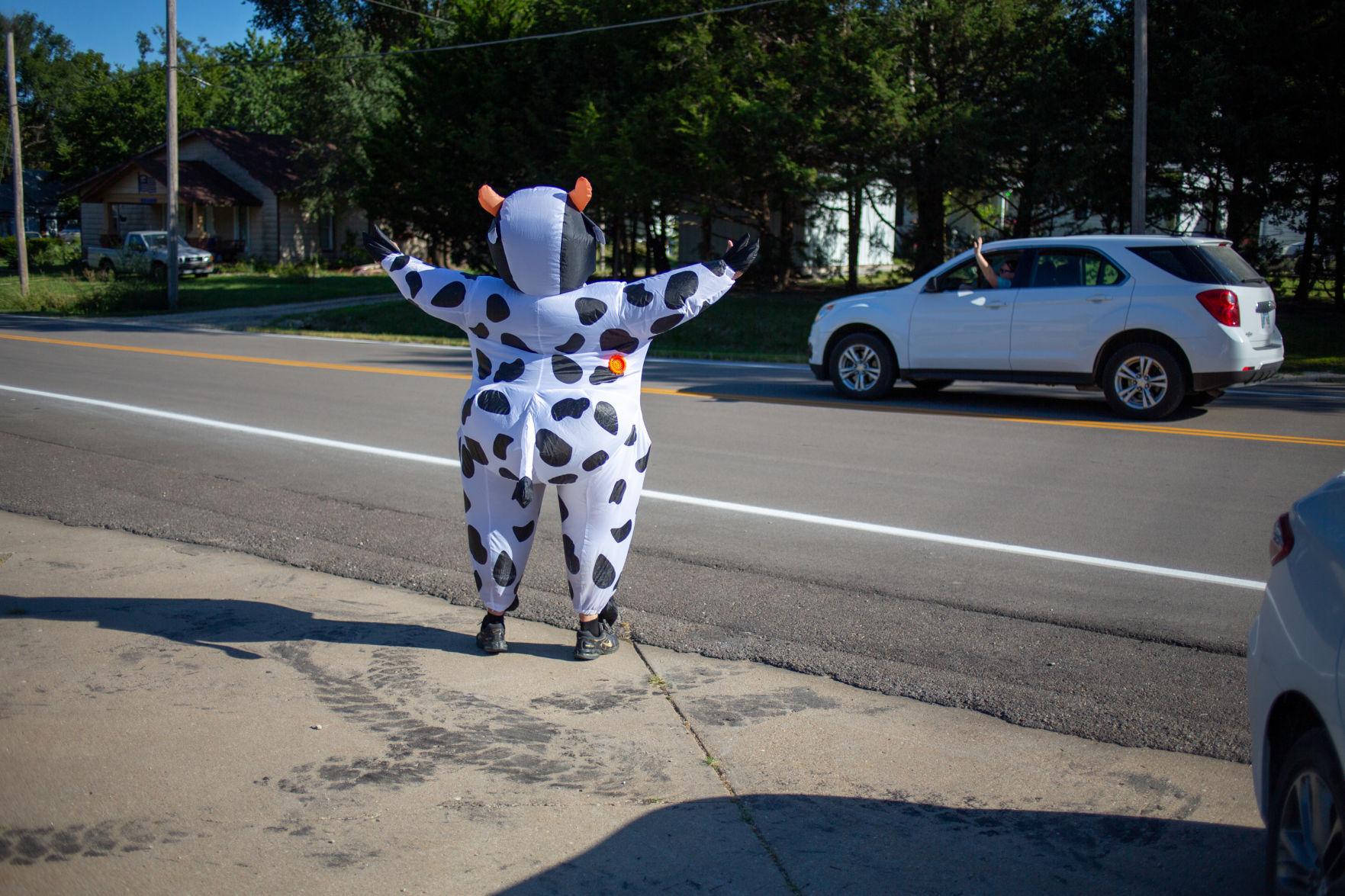 Owen waves at passing cars that honk in his direction.

News
featured
For some students, the first step to an education is learning the language
Gail Parsons gparsons@themercury.com

Maria Izaguirre, a English for Speakers of Other Language teacher at Bluemont and Woodrow Wilson elementary schools, and Lucia Haselhorst, a ESOL teacher at Lee Elementary, collaborate to support culturally and linguistically diverse students and families.

The Manhattan-Ogden school district has children from more than 70 countries who speak more than 40 different languages.

The task to ensure the children and their families have the translation services they need for an academic experience equivalent to their peers whose native tongue is English falls on Emily Cherms, English for Speakers of Other Languages program coordinator.

The number of students enrolled in the program fluctuates as the children’s proficiency levels improve. Last year, about 400 students qualified for the program, Cherms said. However, that is not close to the number of families in the district where English is not the first language.

“I think something that’s important for the community to know is how diverse our communities are,” she said. “Aside from a qualification to ESOL … we’re more in the 1,200 range — 1,200 students that have a language other than English represented in their homes.”

The most common language is Spanish followed by Chinese, and then Arabic, she said. Within each language are many dialects. For example, people from Guatemala and Mexico both speak Spanish, but the language is different.

“Even within Mexico … the dialects are different within different regions of the country as well,” she said. “You see that actually in the Middle East across Arabic as well, very different regional dialects of Arabic exist. Same thing in China, it’s primarily Mandarin, but in other regions of China, it might be Cantonese.”

With so many languages and dialects spoken, Cherms said they try to pair ESOL students with interpreters whose languages more closely align with the child’s.

Sometimes it’s not so easy. Some languages are more dependent on verbal communication and have limited written or print components, she said.

“That’s been relatively challenging because putting some of that print concept to those sounds when you’re trying to work with phonics is hard for students to associate with,” she said. “Things like reading development … you first learn through a sound system. As you begin learning those sounds, then you begin to see them in print and you make that correspondence. It goes from phonemic awareness of the sound to that phonic awareness of the print and that symbolic representation of those, which develops going into reading. So, when you have different languages that don’t have a lot of common or accessible or even historical print resources that makes it challenging for some of the families to develop that literacy skill.”

With so many languages represented the district teaches English strategies. Each student’s experience is different. Some of the ESOL students will have an interpreter with them during the day. For others, if there are several who speak the same language, they may be put in the same classroom.

“We have bilingual staff that can help and support, but because we have so many languages, it’s nearly impossible to always provide native language support in instruction,” she said. “We try to use instructional practices and strategies that help teach English language acquisition.”

For example, this year there is a student whose primary language is Oromo, a language from Ethiopia, for which there is not an interpreter on campus.

USD 383 also contracts with Certified Language International, which gives them access to interpreters of more than 200 languages. This year during Central Registration, a family came in that spoke Pashto, which is the official language of Afghanistan.

The interpreter called CLI to help the family understand the questions. Additionally, Cherms said she has worked with CLI to translate documents.

The Technology Code of Conduct was one example. She read the passage in English, and the phone service interpreted it in other languages. She recorded the audio of the interpretation and embedded it in a YouTube clip and created a QR code for it.

The district’s website also has a translation feature for several languages from Afrikaans to Zulu.

For some of the students, the language barrier is one of several roadblocks they face when they first arrive. When families come from an impoverished or war-torn part of the world, there is an added challenge because of the disruption of their education system. For example, Cherms said Afghanistan’s literacy rate is only about 39%.

“They’ve got the spoken language and are highly intelligent, but some do not have that literacy level, in their native language,” she said.

It is from these families that she has learned about more than just the role of language and communication. The journey many of them embarked on to get to this country has been long and difficult, Cherms said.

“If you want to know what grit and perseverance looks like, it’s these families,” she said. “They have gone through tremendous experiences that we can’t even fathom. And so, education for them — they’ve faced more challenges than education. They are hungry to learn and be educated and be part of our educational system. It’s almost like they’re starving for that information, and to be part of that literacy and language acquisition.”

In addition to the academic education the students and their families are gaining, they are immersing themselves into a culture different from which they came. To help them, Cherms said it is important to try to understand cultural differences, which can put up roadblocks to learning.

“I feel that we need to learn more about their culture in order to help bridge that communication, the culture shock, they may be feeling, and then the social etiquette and differences,” she said.

For example, in some cultures, if a man does not look a woman in the eye when speaking to her, that is a sign of respect.

As the children and their families learn the language, they also learn American culture, but it all starts with the staff who will work with them to make sure the translation is happening, Cherms said.

“Our interpreters are just phenomenal assets,” she said.

Riley County on Friday confirmed 129 new coronavirus cases since Wednesday. This is the second-largest increase in cases since the pandemic began in March.

The total number of cases in Riley County is 1,174. Of those, 679 are active, 489 have recovered and six people have died after testing positive for the virus. There are 223 pending tests.

There are three positive patients at Ascension Via Christi Hospital in Manhattan, officials said.

K-State officials are discouraging students from traveling away from campus during the Labor Day holiday weekend because of rising coronavirus cases.

The Riley County Health Department announced Friday it has revoked event permits for Greek houses at K-State through the month of September. Many Greek houses are listed as outbreak locations.

The man was a resident of the Homestead of Manhattan Assisted Living Facility, officials said. Local health authorities are currently testing staff members and residents.

I_wonder
I WONDER | How have K-State residence halls avoided an outbreak so far?
Savannah Rattanavong srattanavong@themercury.com
09.04.20

Q: How is it that dorms haven’t had an outbreak? There are way more people in dorms than in any one Greek house and yet there have been no dorm outbreaks and several Greek house outbreaks.

A: It’s difficult to pinpoint one exact reason, but K-State officials said the difference in outbreaks may be related to how close students are within the facilities and how they behave.

The Riley County Health Department’s Wednesday coronavirus update confirmed nine out of 11 active outbreaks are linked to fraternities or sororities at K-State.

“The biggest factor is likely less density in terms of living arrangements within the residence halls as compared to many Greek houses,” said K-State spokeswoman Michelle Geering. “Additionally, our return-to-campus plans include having the ability to quickly identify students living on campus, and Housing and Dining Services promptly moving them into quarantine or isolation.”

As part of its de-densifying efforts, K-State reduced its occupancy rate in residence halls by about 25%, limited the number students in common areas and implemented a stricter guest check-in system.

Officials said there’s also likely a difference in behavior between students in residence halls, which are under control of the university, and students in greek houses. “I do think it’s more related to the behavior in the management and control,” said Derek Jackson, vice president of housing and dining services. “Our students are, from what we’re seeing on campus, very serious about following the rules and keeping safe.”

In its residence hall handbook, K-State said it may require students who have tested positive for the virus or been in close contact with someone who has tested positive to isolate or quarantine off-campus or in designated on-campus spaces.

“Each week we are sending a testing invite to approximately 10% of our residents,” Thomas Lane, K-State vice president of student life and dean of students, recently wrote. “Thus far, we have had very few positives in this expanded asymptomatic testing. We are also testing asymptomatic close contacts.”

Jordan Kocher, director of fraternity and sorority life at K-State, said in an email that fraternities and sororities began forming reopening plans in March with guidance from the county health department, K-State and Centers for Disease Control and Prevention.

“While not every facility’s plan is identical since they are owned and operated separately, almost all require masks in common spaces, have increased cleaning procedures, restrict visitors, including out-of-house members, from visiting the facility, and have strict quarantine and isolation procedures,” Kocher said.

The Panhellenic and Interfraternity Councils also are not allowing social events from chapters per Riley County’s mass gathering restriction.

Some of the fraternities with identified outbreaks, including Delta Sigma Phi and Phi Delta Theta, said along with those measures, they also are taking temperatures of those entering their buildings and encouraging those with symptoms or who have possibly been exposed to get tested and follow quarantine procedures.

Typically, sororities average about 68 members per facility while fraternities average about 60. Room situations range from two- to four-person bedrooms to large sleeping rooms with bunks. However, Kocher said many houses this year are operating below capacity.

“While five cases is a lot no matter the facility size, chapter leadership has been following their protocols for isolation and quarantining to keep the other members in the facility healthy,” Kocher said. “Our hope, and what our messaging centers around, is that as members engage in normal student activities outside of the facility they follow these same protocols. Wear a mask. Keep your distance. Stay home if you are sick.”