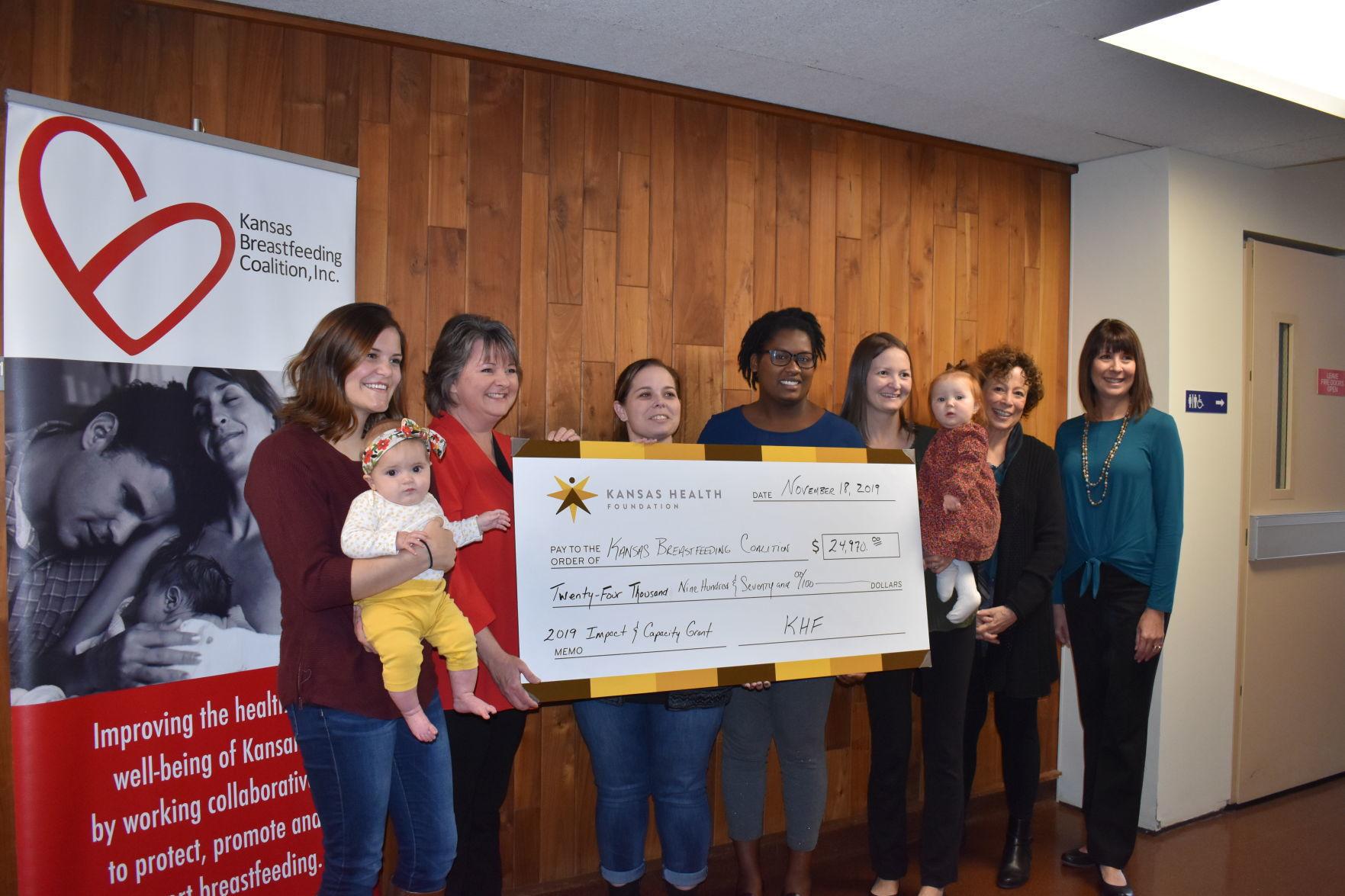 The Kansas Health Foundation awards a nearly $25,000 grant to the Manhattan-based Kansas Breastfeeding Coalition on Tuesday. The money will help six Kansas medical practices to receive the “Kansas Breastfeeding Friendly Practice Designation,” which provides training, tool kits and a template for policies that support breastfeeding mothers.

Emily Meinhardt is a senior at K-State and an intern at the Kansas 4-H Foundation. Meinhardt said 4-H taught her responsibility, creativity and leadership.

4-H laid the foundation for everything for Emily Meinhardt.

Meinhardt, a senior in agricultural communications at K-State, spent her childhood involved with 4-H and now interns for the Kansas 4-H Foundation. As she starts to pursue a career, she hopes to take the lessons she learned from 4-H with her and share them with future 4-Hers.

“Everybody thinks you have to be from rural America, but there’s cooking projects, there’s arts and crafts,” Meinhardt said. “It’s not about the farm animals, but it’s about the skills and the things it leads you to find about yourself.”

Growing up in Marysville, Meinhardt, 21, and her three younger siblings participated in 4-H, and it became an activity that bonded her family.

“4-H was kind of a family thing,” she said. “Long nights in the barn with my siblings, that’s a lot of memories.”

Her primary project was showing cattle. Meinhardt shows Hereford cattle, and recently finished a stint as the National Hereford Queen. She competed against young women from across the country in knowledge of the Hereford breed and several other categories to earn the title.

The title gave her the opportunity to travel the country handing out awards at Hereford shows. Meinhardt said she enjoyed being able to travel and speak to youth, Hereford breeders and others about the breed.

“It was a cool experience to learn from others but also to represent the breed,” she said.

Caring for her animals taught her a lot of responsibility at an early age, Meinhardt said.

“It teaches you a lot of responsibility, feeding them before you feed yourself and making sure they’re well taken care of,” she said.

Responsibility is one skill Meinhardt said she learned from 4-H. It also taught her about creativity and taking constructive criticism. She said hearing thoughtful comments from judges were inspiring because she felt they wanted to help her improve.

“It makes you want to be the best person you can because other people believe in you,” she said.

Meinhardt said being able to enter as many projects as she could helped foster her creativity because so many categories were open-ended. It was a skill that served her well when she started her internship at the Kansas 4-H Foundation, which is based in Manhattan. Her primary job was to create videos of 4-Hers and 4-H programs. Meinhardt said she had freedom with the videos, which helped her find her voice and how she liked to put them together.

Anna Ramsey, Meinhardt’s supervisor at the foundation, said Meinhardt has begun to define her style.

“Having that identity is going to help her succeed,” Ramsey said. Ramsey said Meinhardt is ambitious, determined and always looks for ways to do good in her community.

“She’s always looking for ways to broaden her horizons, whether it’s through making connections or learning new skills,” Ramsey said.

Although she can no longer participate in 4-H, Meinhardt hopes to maintain connections she made through the organization.

She said she met many mentors through 4-H and she hopes to serve in that role for others.

“When I do things or take on a different position, I think about the 4-Hers at home who look up to me and how they will see this,” she said.

In the future, Meinhardt would like to continue being involved with 4-H as a volunteer or judge.

“I want to give back to 4-H because it played such an important role in my life,” she said.

The ‘M’ and ‘A’ letters on the Bluemont Scenic Overlook show spray-painted vandalism on them on Monday morning.

Riley County police are investigating after someone vandalized the Bluemont Hill Scenic Overlook over the weekend.

Someone spray painted the M and A letters of Manhattan.

One of the messages said “ZAC” and another “F- — KANSAS!!!” News Radio KMAN reported that someone spray painted “an obscene gesture” on the overlook glass railing but the paint was not there by Monday morning. The rest of the messages and markings had been removed by Tuesday morning.

RCPD spokewoman Hali Rowland said police were notified at about 8:40 a.m. Monday, and officers are filing a criminal damage to property report, listing the city of Manhattan as the victim.

Police estimated there was about $500 in damage to the letters, glass, wood and sign.

After a $70,000 fundraising project, the club opened up an ADA-compliant viewing platform at the hill in early November.

Police ask that anyone with information contact the RCPD or the Manhattan Riley County Crime Stoppers. Anonymous information provided to Crime Stoppers at 785-539-7777 could result in a cash reward up to $1,000. 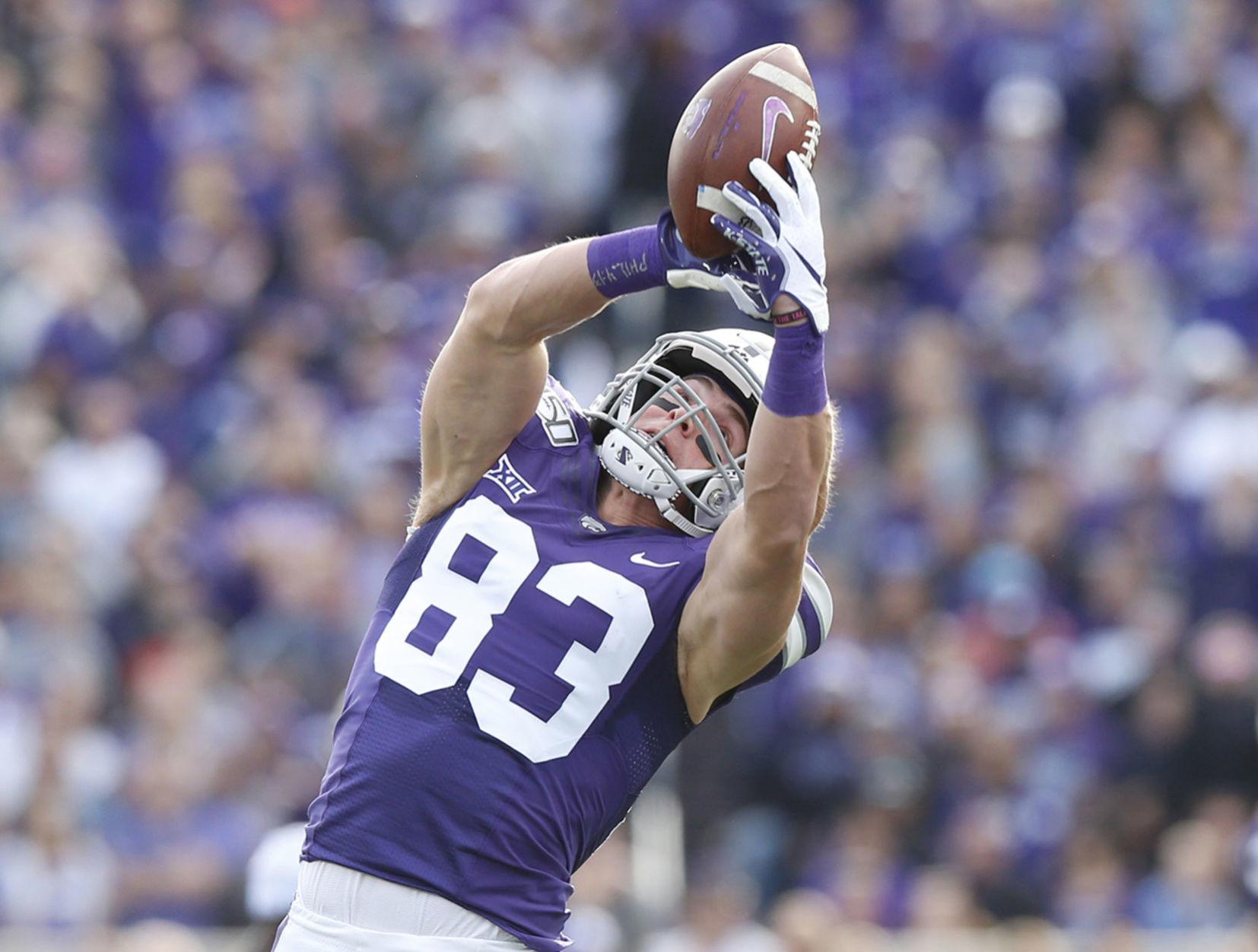 K-State wide receiver Dalton Schoen (83) grabs a Skylar Thompson (10) for a 68 yard touchdown play on the first play of the game Saturday as K-State took on West Virginia in Manhattan on November 16, 2019. (Bo Rader/Wichita Eagle/TNS)

In response to what he is calling fabrications in the Mercury, Riley County commissioner Ron Wells said during Monday’s meeting that he’d resign if the newspaper would commit itself to telling the truth.

Wells was responding to a Thursday story in The Mercury after he made Facebook comments implying that breasts are sex organs and calling a community member a “nimrod.”

Wells also said that he would never use a “derogatory” term like “boob” as written in the story’s headline, except possibly in reference to Mercury staffers, although he did call a Facebook commenter a “nimrod.” Wells said that in his Facebook post asking why women seek out breast enhancements, he was asking sincerely and was not previously aware of non-aesthetic reasons for the procedure.

“If I thought it would make any difference, if The Mercury would promise to print the truth from here on out, I would even go over this afternoon and resign if they would promise to start telling the truth,” Wells said during commissioner comments at Monday’s meeting. “This is all obnoxious. It’s all uncalled for.”

After the meeting, Wells clarified that his vow to resign was “tongue-in-cheek,” since he doesn’t believe it would make a difference.

Wells said that he was considering further action and said that he had consulted with a Salina lawyer on what his legal options might be. He also said he’d sent a yet-to-be-published letter to the editor to the Mercury, but he was considering paying for an ad to “call (The Mercury) on its lies.” The Mercury did not refuse to publish the letter, as Wells claimed, but did not promise him a publication date. (That letter can be seen on Page A6 in Tuesday’s paper).

“I wouldn’t bring this up, because you’re never going to win with the newspaper,” Wells said during the meeting. “Who knows how (The Mercury) will make this out? There won’t be anything in print about what I just said. I guarantee it.

“I just want it for the minutes that the Manhattan Mercury published two lies and said that that’s what they thought I meant. The rest of it, I admit I did. I can embarrass myself all by myself.”

Since it opened Oct. 7, the new Riley County EMS substation has cut down on response times to the northern portion of the county, EMS/Ambulance director David Adams said Monday.

Ambulance response time has dropped by 7.4 minutes per call, Adams said. The station — when looking at calls to the Riley, Leonardville and Randolph area — received 18 calls in October, he said, compared to a countywide call volume of 435.

The new station and its ambulance have also helped improve response times to northern Manhattan, he said. That’s because the agency intentionally located the station at the public works building, north of Manhattan on Tuttle Creek Boulevard, to serve both areas, which also had the added cost-saving of using an existing county property.

The station includes sleeping quarters for two and an ambulance bay.

“It’s doing what we expected it to do,” Adams said.

He said the commission will also need to address space concerns for the county’s election operations, particularly storage of its new voting machines.