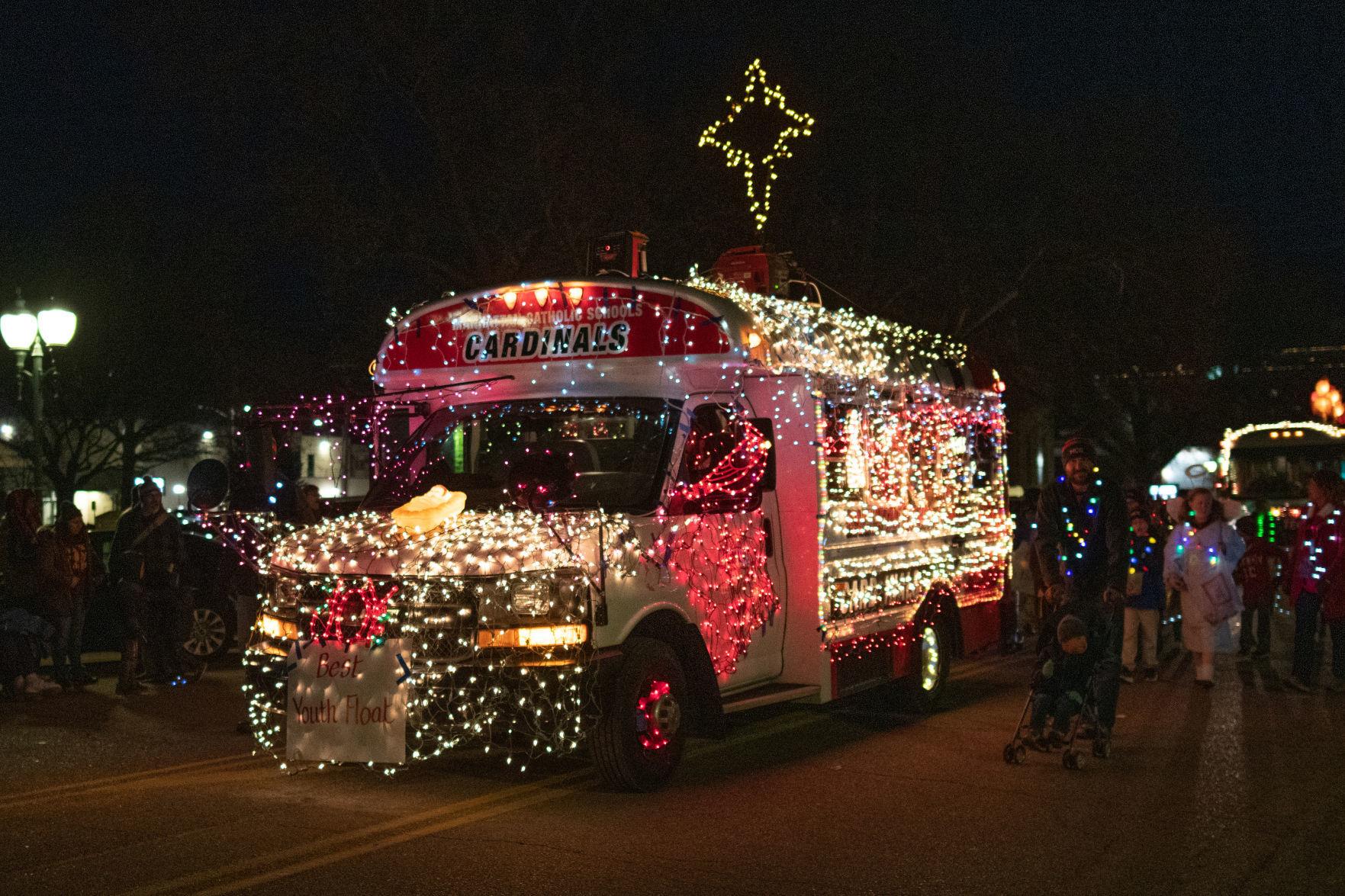 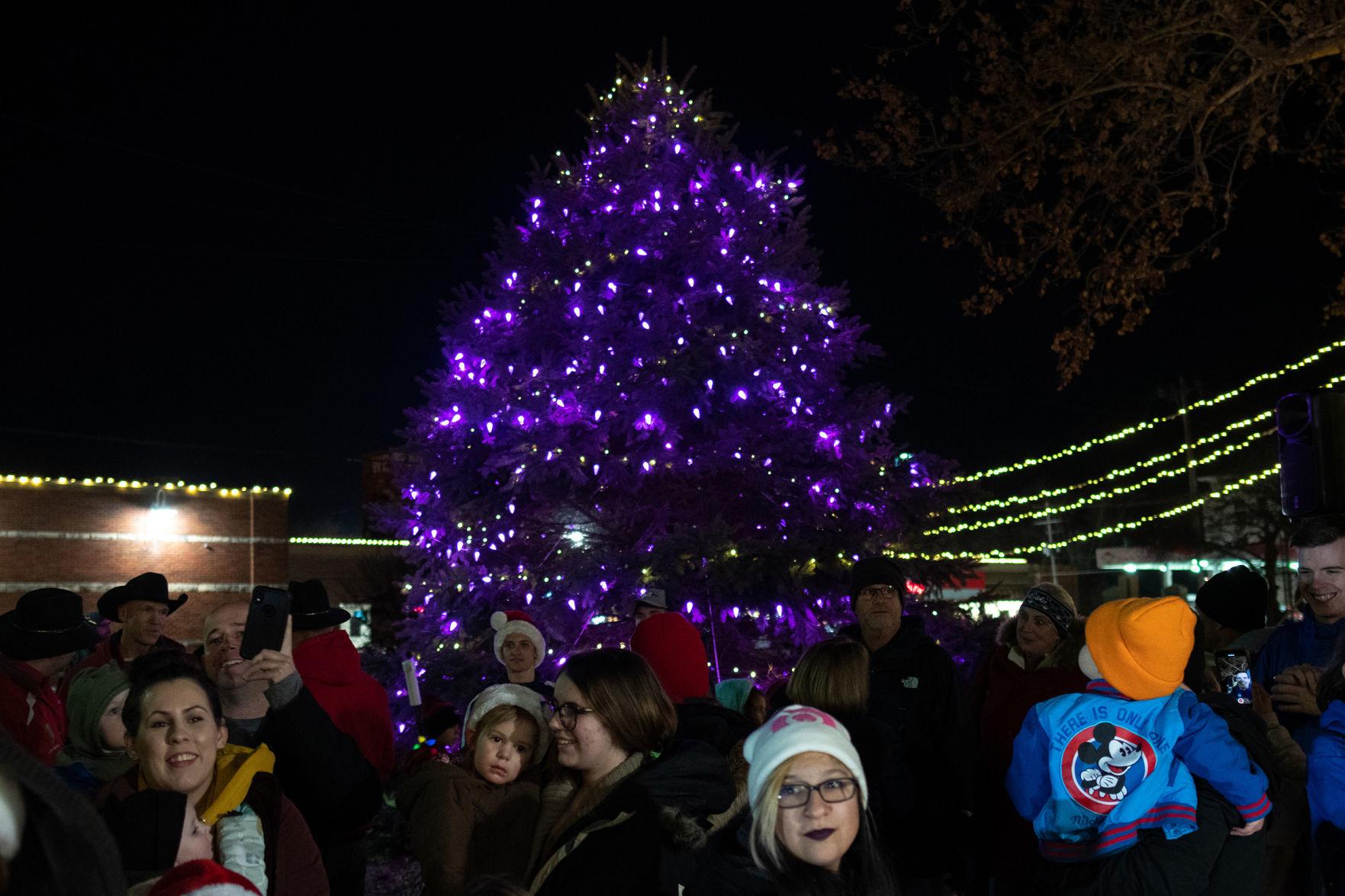 Hundreds of people gather to see the lighting of the Mayor’s Holiday Tree, an 18-foot Blue Spruce recently transplanted from a local tree farm. It replaced the tree that blew down because of high winds this spring.

Community members quickly emptied a few platters of cookies shaped like cheeseburgers. The event typically raises between $4,000 and $6,000 for local groups picked by the Thomas More Ladies, who host the event.

Mice-shaped cookies were a hit at the 29th annual St. Thomas More Catholic Church Cookie Carousel. The event sold over 1,000 pounds of cookies at the flat rate of $6.50 a pound.

Sisters Kamryn and Tatum Lindsay and their mother, Sam Lindsay, all of St. George, each pick out their favorite cookies. Volunteers estimated that church members made 1,000 pounds of cookies for the Cookie Carousel.

Sisters Kamryn and Tatum Lindsay and their mother Sam Lindsay, all of St. George, each pick out their favorite cookies at the 29th annual Cookie Carousel at St. Thomas Catholic Church on Saturday morning.

Ashlyn Potter, an eight-year-old volunteer at St. Thomas More’s Cookie Carousel, organizes cookie platters at the church’s fundraiser Saturday morning. Potter said she had the chance to pick out some of her favorite cookies before the start of sales at 8:30 a.m.

There might be a strategy to picking cookies by the pound, but if there is, nobody really seemed to use it Saturday morning at St. Thomas More Catholic Church’s 29th annual Cookie Carousel.

Dozens of families and community members from the area carefully paced the lines of cookies, picking out from plain chocolate chip platters and peanut butter pastries, among others.

Beside traditional gingerbread and Christmas tree shapes, there were cookies shaped and decorated like hamburgers and mice, and bright festive frosting caught the eyes of the toddlers who could barely peer over the three-foot-high tables.

About 240 of the parish’s families each baked at least four dozen cookies, but some families went the extra mile and baked more than that, said Rebecca Gould, chair of event. For that reason, it would have been a feat in futility to count the amount of cookies on the six rows of tables, each the length of a basketball court, so the volunteers didn’t even try.

Instead, they measured the cookies the same way they sold them — by the pound — and like other years, the volunteer women could only estimate that they had 1,000 pounds of cookies to start the day. This year, that start came a half hour earlier at 8:30 a.m.

“People were waiting in line anyway, so we thought, why not start earlier?” Gould reasoned. “We also shortened it (to end at 11 a.m.), because by within an hour, most of the cookies were gone anyway.”

Jean Akin, who said she regularly comes to annual fundraiser, carefully considered each cookie before reaching over with a gloved hand to put them into her clear plastic clamshell container.

“It’s easier than making them myself, and I don’t have to go through the fuss of buying all of the ingredients and then having leftovers,” she said. “Plus, the money goes to a good cause.”

As Amandine Yao and her daughter, Nohemie, 4, started their trek through the rows of cookies, Nohemie made it clear that she did not like chocolate cookies or cookies with frosting. Immediately after making her declaration, she asked her mom to grab her a pink frosted cookie.

“I’ll probably end up buying $40 (worth of cookies),” Amandine said with a laugh. At $6.50 a pound, that would have been roughly 6 pounds of cookies, although Amandine, now in her third year attending, said that would likely only last her a few weeks.

While a parishioner played Christmas songs on piano in the background, Santa and his elves tried, mostly in vain, to coax kids away from the cookies for a storytime session. But like Santa himself, the Cookie Carousel has become a holiday tradition.

“It’s all the families who come here who make this special, and it’s a lot of peoples’ tradition to come every year,” said Kelli Potter, a parishioner who volunteered at the event with her daughter, Ashlyn, 8. “It’s become a Manhattan tradition, really.”

When parishioner Carol Pacey organized the first Cookie Carousel 29 years ago to raise money to start a bell choir, she said it was “kind of a disaster.” She’d grabbed the idea from a magazine, but that first year, people could only go through the cookie line once.

But with a little bit of fine tuning, the idea took off, and in the 28 years since, the event has grown, more than quadrupling by Gould’s estimate.

In hosting, organizing and facilitating the Cookie Carousel, the Thomas More Ladies group raises between $4,000 and $6,000 each year for various nonprofit organizations.

This year, the group chose to give money from the fundraiser to Laundry Love MHK, Fairy Godmothers, St. Isidore’s Catholic Student Center’s Dollar Dinners and St. Thomas More’s Youth Ministry, which also volunteered at the event. 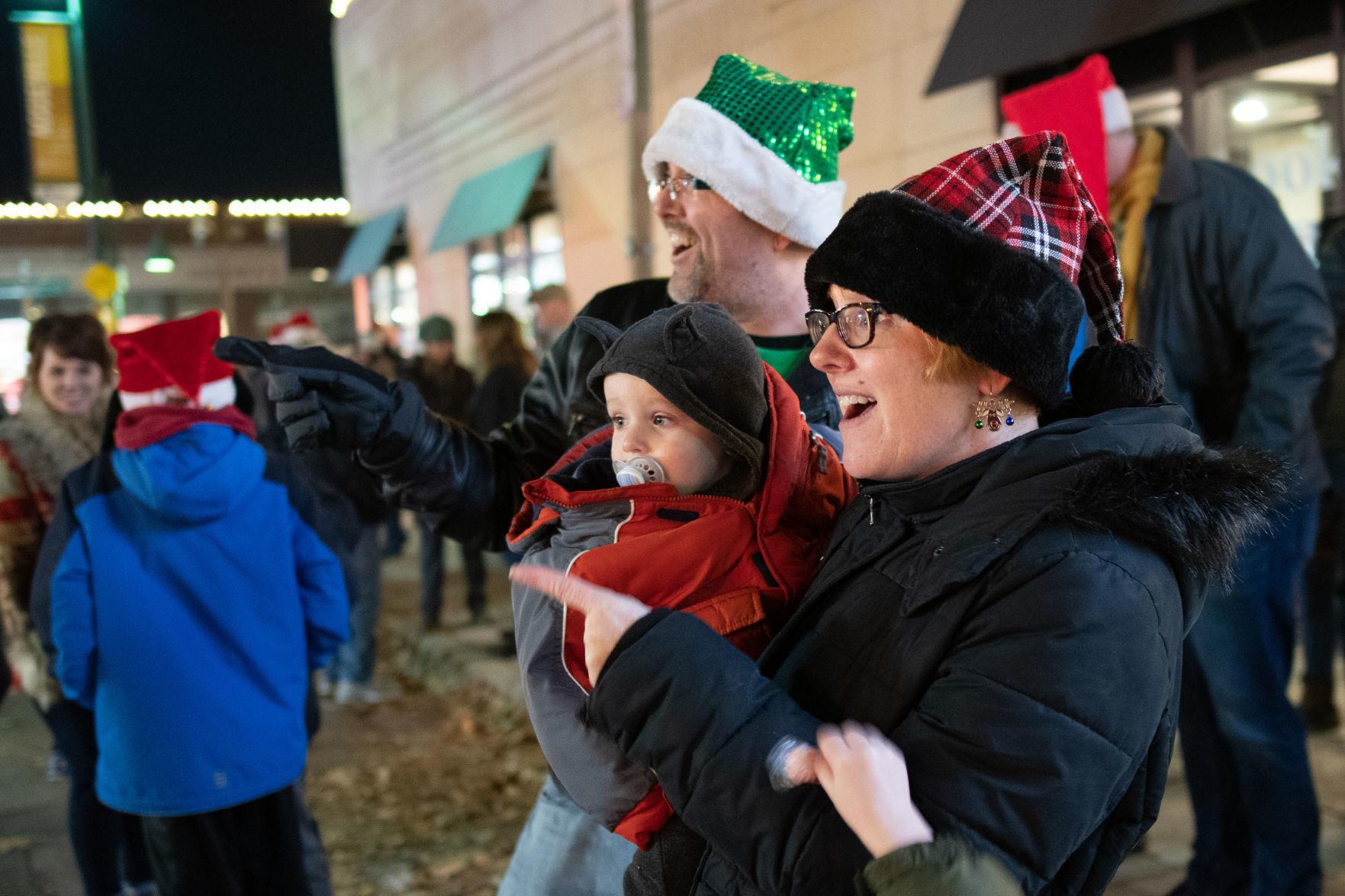 Jennifer Polopolus-Meredith, holding her son Torin, 1, watches the parade travel down Moro Street in Aggieville along with her husband, Bret Meredith, and her son Xander, 4 (unseen).

The Mercury requested records of county and city officials in October to compare expenses and mileage of the people who serve as commissioners.

Two county officials accrued about $7,000 in expenses and mileage from 2018 until the fall of 2019, according to Riley and Pottawatomie County documents obtained by The Mercury in October.

Pottawatomie County commissioner Dee McKee accrued $6,809.59 in expenditures and mileage from 2018 until the fall of 2019.

Rodriguez said he had a trip to Nashville for county work. He also travels often to Riley and other cities in the county for city meetings.

However, commissioners don’t always make a request for reimbursement of travel.

Rodriguez said he does not track or get compensated for mileage in town, and McKee paid for all her meals and travel while in Washington, D.C., for the National Association of Counties conference. She has attended that twice, in 2018 and 2019.

McKee was reimbursed for two plane tickets, one in 2018 and one in 2019. One ticket cost $926.66 and the other for $687.04, respectively. She met with President Donald Trump in the White House Oval Office on one of the trips.

The $926.66 ticket was more expensive as McKee booked the trip only a week in advance. She said she could not make the reservation until about a week before the trip due to township planning.

McKee said she covered all costs for her own meals and mileage while in Washington. She said she was not reimbursed for those costs.

Rodriguez recently visited Nashville to attend a conference on the county’s behalf. His wife went with him on the trip, but the county did not cover any of her costs while on the trip, Rodriguez said.

When asked about her expenses, McKee said she is much more involved in affairs than the other commissioners, Travis Altenhofen and Pat Weixelman. She also said she travels much more than her colleagues because they have other full-time jobs.

“We’re the hands of the state government,” McKee told The Mercury.

McKee frequently visits Topeka during the legislative session at the beginning of every year. She also attends meetings throughout the region in cities such as Salina, Emporia and Wichita, among others.

During the same time period, commissioner Travis Altenhofen accrued no expenses while commissioner Pat Weixelman received $193.50 in reimbursements for mileage from his home to Westmoreland for meetings. He was reimbursed for a total of 387 miles.

Altenhofen said he does not report expenses to the county for reimbursement, while McKee was reimbursed for 9,660 miles of travel, according to the documents.

Kansas statute 28-169 indicates that officials in any county with a population below 80,000 people can be compensated for “necessary traveling expenses.” That is an unchanged law since 1943, according to a Kansas Attorney General opinion issued in 2004.

“Traveling between work and a personal residence is generally not considered to be ‘performing duties’ for the employer,” according to the opinion, however.

As of 2017, Pottawatomie County has a population of 23,908 people and Riley County’s population is 74,172, according to the United States Census Bureau.

“Pottawatomie County does approve mileage for commissioners traveling to and from their regular scheduled commission meetings,” said Ashley Rice, county election deputy, in an email to The Mercury. “This is paid through their payroll because it is a taxable benefit.”

Weixelman agreed with McKee that she travels much more than the other commissioners for the county. He said she doesn’t overspend.

Pottawatomie County commissioners’ annual salary for 2019 is $28,078.44, according to records The Mercury obtained.

Riley County commissioners made $45,900.64 in 2019, according to Tami Robison, budget and finance officer for Riley County.

Altenhofen suggested that Pottawatomie County adopt a policy for the commission on their expenses that details what specifically is reimbursable.

Butler did not have any expenses.

None of the Manhattan city commissioners tracked mileage, other than McKee had a taxi fare of $20.73.

At 10:02 p.m., the Junction City Police Department responded to a report of a violation of a protection order and a possible kidnapping at a residence in the city. Officers were told that Zachary Lima, 27, had entered a residence and forced Christopher Young, 24, out at gunpoint.

The Geary County Sheriff’s Department, acting on given information, responded to the Milford Lake area at the U.S. Army Corps of Engineers Gathering Pond below the dam, finding the men.