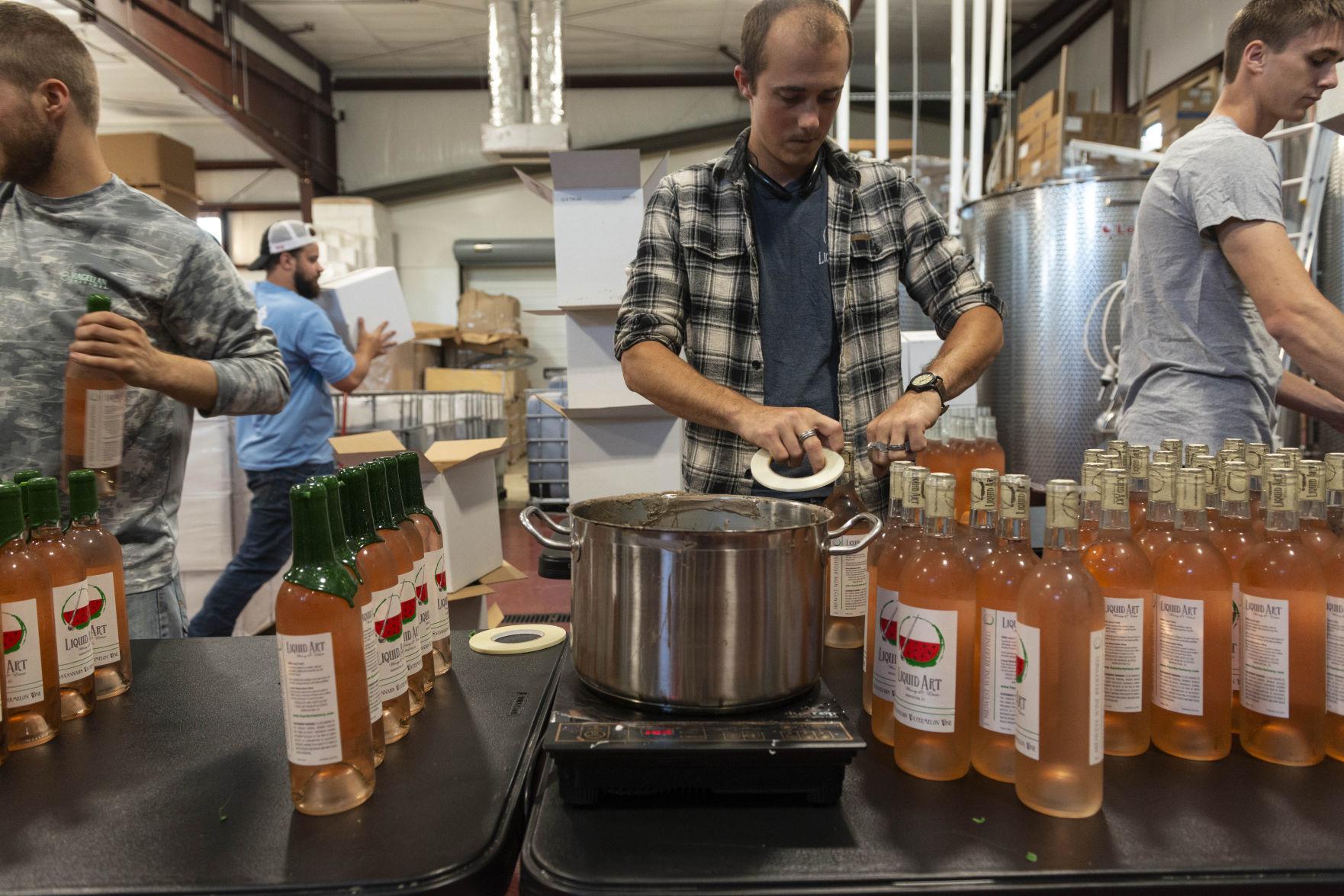 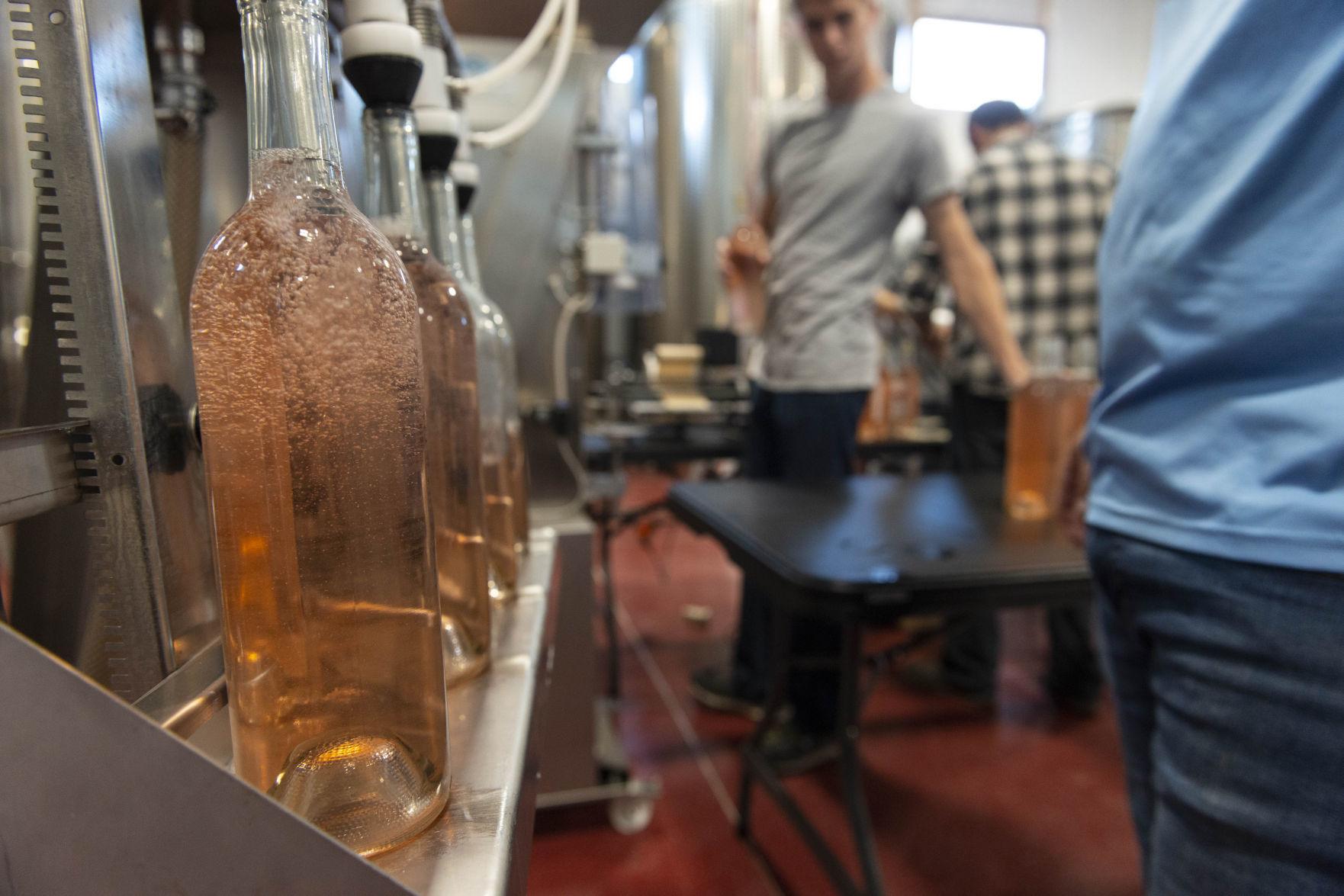 K-State senior management major Hank Raines of Shawnee waits for bottles to fill during the bottling of Savannah’s Watermelon wine on Wednesday at Liquid Art Winery. 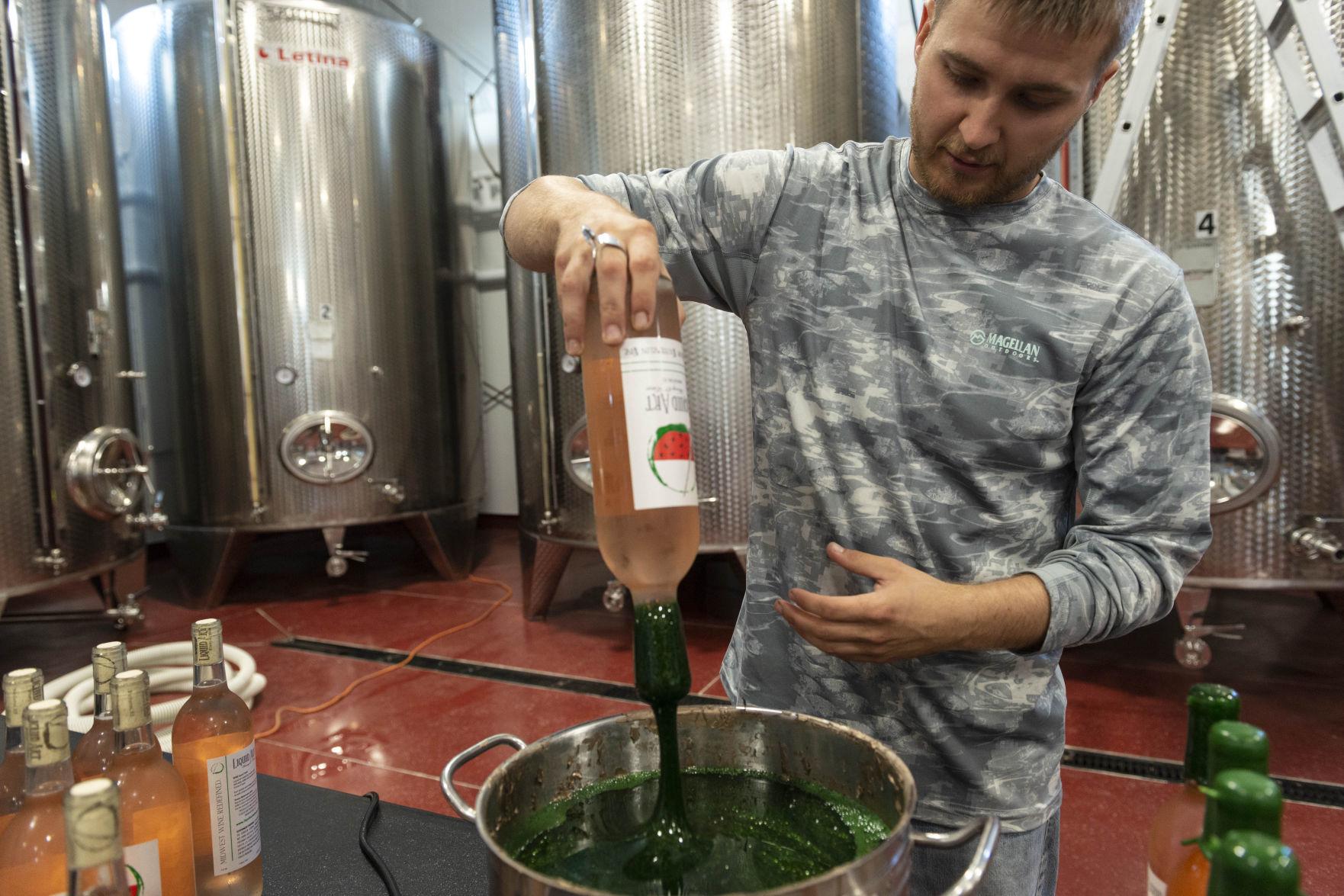 Liquid Art Winery production manager Landon Cook dips a bottle of wine into wax during the bottling of Savannah's Watermelon wine on Wednesday. 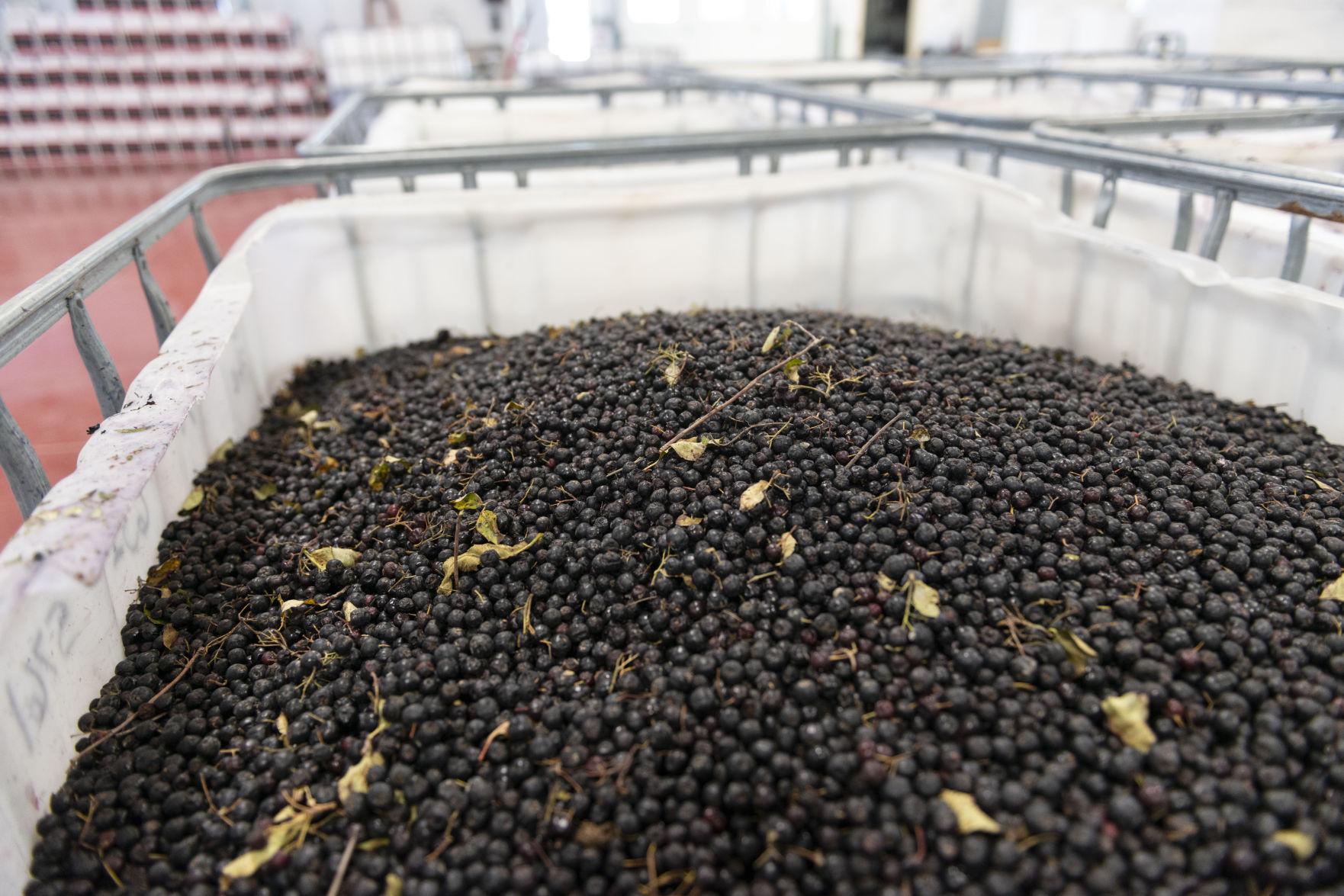 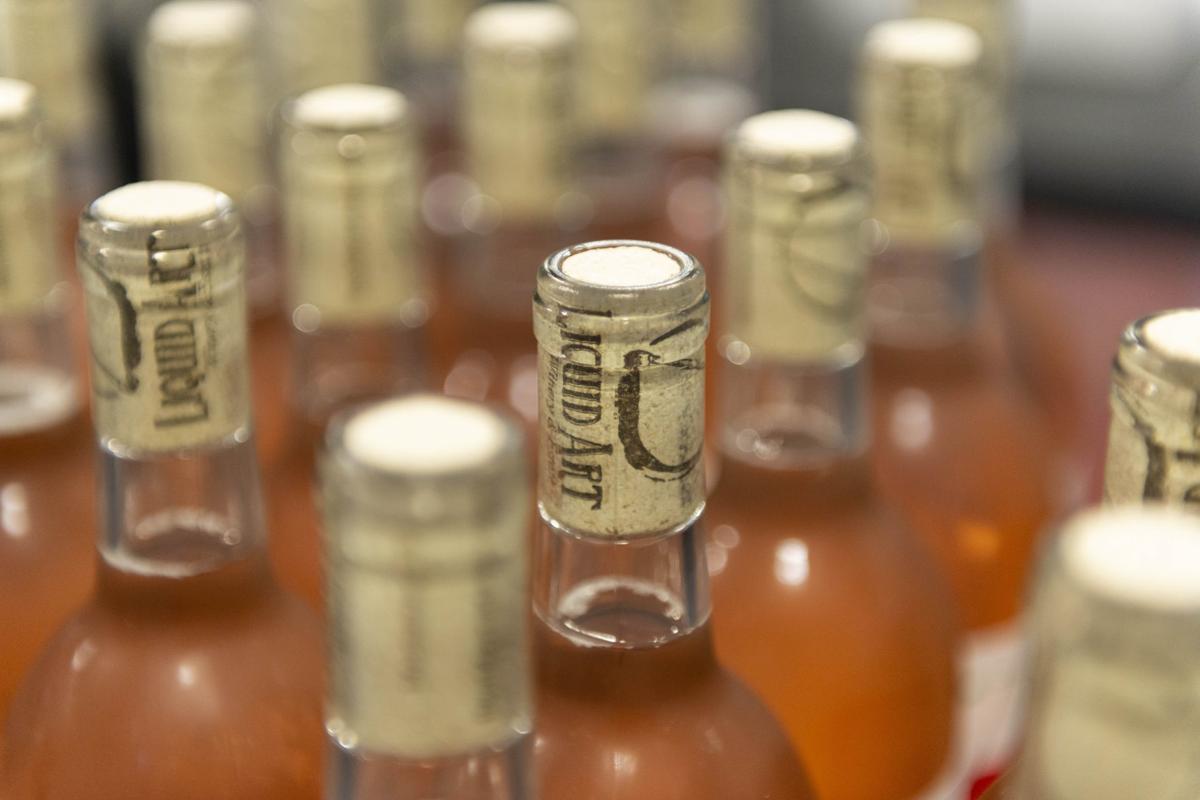 Bottles of Savannah's Watermelon wine wait to be taped and waxed during bottling at the Liquid Art Winery.

K-State senior management major Hank Raines of Shawnee waits for bottles to fill during the bottling of Savannah’s Watermelon wine on Wednesday at Liquid Art Winery.

Liquid Art Winery production manager Landon Cook dips a bottle of wine into wax during the bottling of Savannah's Watermelon wine on Wednesday.

Bottles of Savannah's Watermelon wine wait to be taped and waxed during bottling at the Liquid Art Winery.

Since planting their first grapes for Liquid Art Winery three years ago, Danielle and David Tegtmeier have made a little bit of progress.

In the three years it took for those grapes to ripen for harvest, the couple has built an event center and tasting room, expanded the winery’s production area, planted 70 more acres of grapes in 2018, added 20 employees and started offering hard cider for purchase in stores.

Oh, and they’re now parents of a 2-month-old girl, Savannah.

“They always say there’s no right time to have a kid,” Danielle said. “So, there’s nothing like having a child in the middle of wedding season, launching a new brand and expanding the production facility.”

Danielle kept busy working on the business throughout the pregnancy.

“She was out training our sales rep as she was going into labor,” David said while holding their sleeping firstborn child. “Having contractions and still selling cider.”

Danielle corrected him. “I finished the route 30 minutes before contractions started,” she said.

The native Kansans have brought an international flair to the community with Liquid Art primarily focusing on growing European grape varieties. As a team, David handles the wine creation and Danielle handles the sales.

“Most people didn’t think that doing it on this scale was even possible for Manhattan,” David said. “It’s always fun to prove people wrong. We’re the largest winery in the state on both production and facility.”

David said the winery had an annual production rate of 80,000 gallons of wine and hard cider. In June, the winery added 9,000 square feet of mostly production area, which helps them produce more hard cider. The winery has started selling Dave and Dani Craft Cider.

Danielle said they initially didn’t plan on selling hard cider outside of the tasting room.

“We used to just have our hard cider on tap,” Danielle said. “Over the last two years, almost all of our guests have been asking to be able to take it home.”

The production expansion will also help the winery prepare for the incoming rush of its own grapes.

This represented the first year that Liquid Art has produced wine with its own grapes from the estate. The winery has been producing its wine with grapes from other vineyards since it takes three years for the grapes to grow.

Liquid Art has a total of 100 acres of grapes planted with 20 acres on the estate and the rest on satellite properties. David said those planted acres will produce 500 to 600 tons of fruit.

“I think that’s like 25 percent of the grapes in the state from the most recent numbers I’ve seen,” David said. “That will produce anywhere from 60,000 to 80,000 gallons of wine in a couple of years.”

David said the grapes currently being harvested on the estate will produce Chardonnay, Cabernet Franc and Petit Verdot. He said it’s probably the first Petit Verdot harvested in the state.

“The whole reason we came up on this hill is not only for the view, but that rocky soil,” he said. “All of the days of frustration building that vinery and managing those rocks have finally come to fruition.”

“You will literally start to see the fruits of the labor,” Danielle said.

Unlike the situation for many farmers, David said dry years are best for the grapes. He said more nutrients packed into smaller clusters are good for wine making.

“It’s very concentrated this year because we didn’t irrigate any of those vines at all,” he said. “Those were dry farmed in one of the driest years we’ve had in a long time. Lots of very, very small berries, so they’re hyper concentrated.”

The Tegtmeiers said the winery has been welcomed with open arms.

“We’re pretty proud to be a part of the community, and a bragging point for Manhattan to say they have a cool winery on the hill,” David said.

The winery has been harvesting its grapes and producing and bottling its wines and cider, including Savannah’s Watermelon Wine.

The family is frequently together at the winery and their daughter has a wine named after her, but it’s not quite a family business yet.

“We need her to get big, so we can put her to work,” David joked.

We're always interested in hearing about business news in our community. Let us know what's going on!